I remember having visited the Delhi Zoo from a picture of my childhood where I and my younger sister are sitting on my father’s lap. That’s all I remember. And before going any further on the visit – I was in two minds on whether to publish this as a post or not, but then I thought – what harm would my one small story of one tiny trip do to the site?! :-) so here we are… 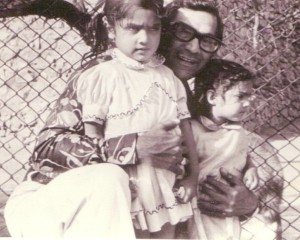 As one grows up, the desire and the peer-pressure to visit the Zoo decreases a great deal. It keeps on going down and then suddenly shoots up as you have kid(s) of your own.

So when Pihu was born in 2005, we began to feel the pressure. We managed to thwart the plans in first year by putting the case of her being too young. By second year, it was case of not a right weather or some such thing. By the time she was 3, we were running out of ideas and finally in the winters of 2008, the visit happened. Our lethargy and anxiety made way for other family members’ zeal and vigor and we started off on a late winter morning towards the ‘Delhi Zoological Park’ on a lazy Sunday. 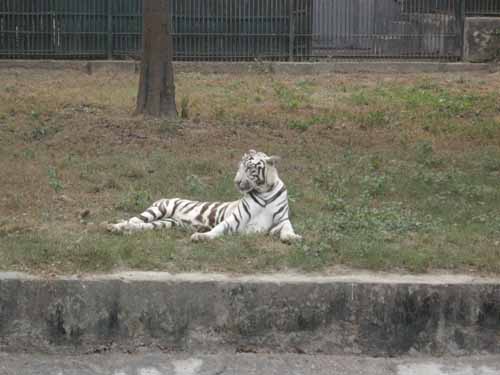 It was to be a pack of 8, spread across a young Mahindra and a trusted Maruti. We reached the zoo by about 12 noon maneuvering our way amid lean Sunday traffic. As we made our way to Delhi Zoo, which overlooks the great ‘Purana Quila’ – considered to be the abode of Pandavas, we were not too disappointed with the car parking arrangements. They have converted few erstwhile gardens into parking places, essentially asking cars to find a way and park. Markings, signage, parking slots are still a luxury thing to expect in parking places in this part of world.

In summers it opens at 9.00 AM and the time is 9.30 AM in winters. Indian nationals have to pay Rs 10 as the entrance fee, and its Rs 50 for foreign nationals.

We moved towards the entrance to the park, passing vendors selling ice-creams, soda-pop, kids’ books, calendars to what not. The incessant reminders on the loudspeakers on safety, don’t take food inside, take care of your belongings and a large melee of people pouring in from all parts of neighboring states might make you feel that you are instead going to a Mela than a Zoo. If you have time to look beyond the numbers and actually focus which I had since someone else was in queue for tickets, you would notice that there are herds of school children holding each others’ hands in serpentine queues, there are love-birds trying to find a secluded corner, newly-weds, families rather large families having 5 generations, a very very minority of foreign nationals and virtually everyone and anyone which you could imagine. I think it is the size of our population which brings this amalgamation of color/shape/size/etc for almost any event which happen around us. 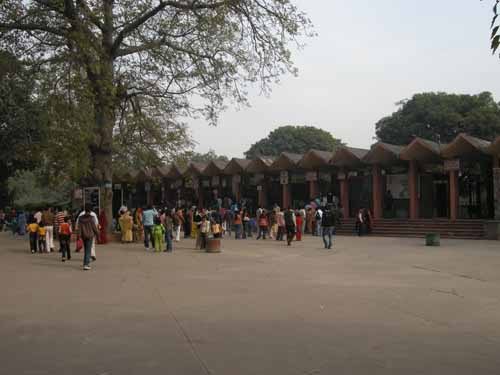 Ticket Counters and the Large Open Area in Front

Delhi Zoological Park was setup in 1959 and is probably one of the bigger zoological parks in India, taking in excess of 200 Acres of space and has a varied mix of animals and birds. Its a good idea to buy a small booklet which costs Rs 10 at the time of buying tickets. This booklet has a map which comes very handy and can go a long way in planing your trail.

We went in and noticed that as you get in, you climb down few sets of steps and find yourself along side a narrow stream hosting ducks. If you are attentive you would also notice that you can walk along a arrow-painted guided-path, that way you can cover the Zoo in a better way without getting lost in the myriad of cages, lawns, open enclosures and so on. 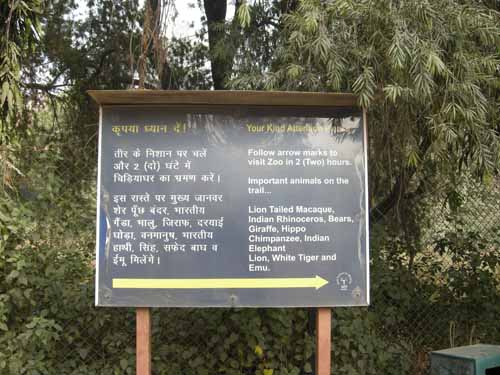 After ducks, we found a lone Sambhar who seemed pretty bored. Not a very good sight though. It was a grassy/bushy enclosure so I am not sure but there could be more Sambhars idling deep.

A few steps further, there were the long leg Ostriches busy eating, unmindful of external world. Unlike Sambhar, which I had seen few times in a natural habitat, this was the first time I was looking at an Ostrich. They were really tall. 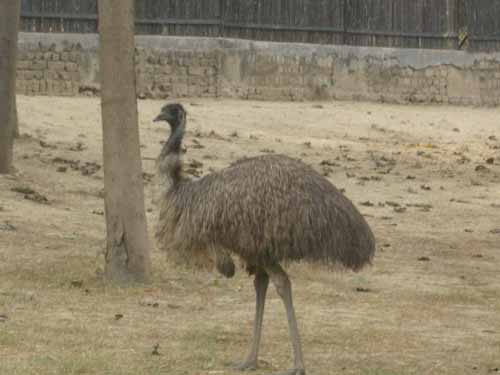 Post the Ostrich, it was the turn of ‘Neel Gai’ (). It was not a very clear day and hence the pictures are looking washed. We moved on and reached a place where there were these vehicles, rather a contraption created out of heavy-weight mover machines, which one can hop on and take a guided tour instead of the traditional walk. We chose to walk after realizing that we would have to wait for another 30-40 minutes to get a full wagon since we didn’t want to split across cars. We were glad later on our choice.

A little walk later, we found the big cat i.e. ‘The White Tiger’. The tiger was in a open air enclosure separated by a ditch from us. There were infact two back-to-back enclosures and they were in play-ful mood. We were about 50 feet away from the beauty and it was sheer fun to watch the cat galloping across trees and taking a splash in the small pond. After watching it and getting a eye-full we moved on. 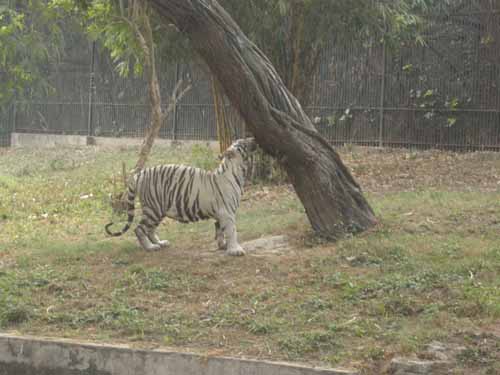 Since it was a large group and we were not too sure whether we could do the whole thing, we had to make certain choices. While there was a general consensus on being able to see Asiatic Lion and Zebras, everyone was dying to be close to a Giraffe. So we took a turn and even though we were not expecting it, we found ourselves facing the bunch or Royal cats.

The leopard being spotted

It was a sheer joy being so close to these gleaming coated cats. We had our share of pics through the cage. This area was a little away, sort of a courtyard with other cages having other animals unlike the large open enclosures.

We stepped out and headed briefly for dear Bear.

And then on our right, we saw these large and tall animals. As you watch a Giraffe taking those long strides with the tall slender neck swerving to the sides, its difficult to believe that how did they manage to survive throuhg all those millions of years of evolution. As expected, the enclosure for this animal was fitting to its size. Time to rest a while before we move ahead. 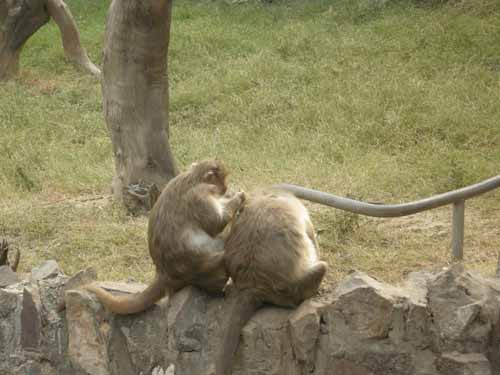 A quick look at monkey business and we found the Asiatic Lion. Something was wrong with him since he was taking these unending circular walk.

Its pretty big and bulky

By now, we were back to the main gate. We passed a Kos Minar before we got out. A sunday well spent.

A day at the Delhi Zoo was last modified: September 8th, 2019 by Smita Dhall

Had it not been for the book, Outlook Traveller Gateways (on HP), Naggar would not have happened. Books are still much much superior as compared to host of blogs and websites. Online forums, at best, are good for an “occasional tip” and that too happens cause people speak about the content which is quite recent. Books need to re-published. The Outlook Traveller Gateways (on HP) which I referred to was published in 2008 and two years down the line nothing much had changed….