Whenever we visit a Museum or a Memorial, we always wonder what compels us to visit such places. What do we hope to see? There are various kinds of museums in the world of your interests e.g. Art, Science, Cultural, Historical, Sports, as well as there are many other types of museums. When we go to a new place, these museums will always fascinate us, who are curious to know about the heritage and history of the city. Like all other cities in the world, Delhi, the Capital of India, also blessed with numerous museums which can be explored to know the city better.

We also know that all museums aren’t going to appeal to all people. The National Museum in New Delhi holds variety of articles ranging from pre-historic era to modern works of art, whereas the National Gallery of Modern Art is the leading Indian art gallery; Gandhi Museum is showcasing the life and principles of Mahatma Gandhi or National Rail Museum focuses on the rail heritage of India, so as others. But each visit at these places will leave you marveling at the creativity & beauty of each one of the exhibits.

When I came to Delhi, I worked as a trainee for few months in the Indian Express, one of the leading Newspapers in India. Then one fine day, I came across Shankar’s International Dolls Museum, which is very close to the Indian Express building in Bahadur Shah Zafar Marg, New Delhi. As a newcomer to the city, it became my favourite place for the next few months to spend some time. Even today, we do visit the place along with our child on a regular basis. This is the perfect place for the entertainment of children.  A Doll is a child’s best friend and I am not mentioning girls alone here.

The Dolls Museum was established by K. Shankar Pillai, a noted political cartoonist. He was once gifted a traditional Hungarian doll by the ambassador of Hungary & he instantly fell in love with it. As his fascination with dolls grew, he began collecting dolls from all around the world on his trips abroad. Soon he had a large collection and started holding exhibitions for children wherever he went. In one such exhibition,  Mrs. Indira Gandhi suggested that a permanent museum be made for the dolls. In 1965, a separate section was dedicated for the museum, spanning a huge area on the first floor of the Children’s Book Trust building. 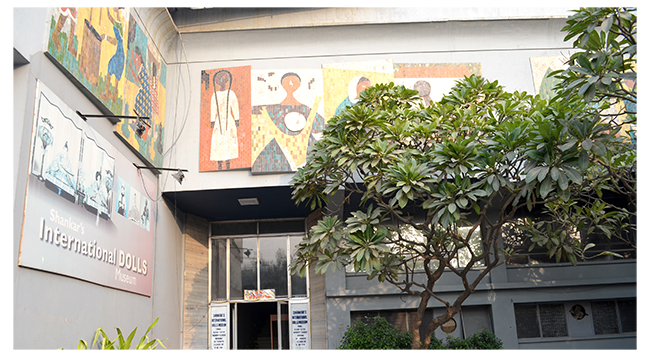 Dolls from every part of the world, depicting every aspect of the society and culture of a country, have been displayed, covering almost all the countries in the world. There would be close to 7,000 dolls on display from all over the world, from America to Africa; Europe to Asia. Each doll is beautifully dressed in costumes that represent the country or the region they come from.

There are two sections within the museum, the first one that showcases dolls from European countries, e.g. Germany, Hungary, Poland, the UK, the USA, New Zealand, Spain, Australia, Romania, France, the Commonwealth of Independent States while the second one holds exhibits from the Middle East, Africa and India. European dolls were the first to welcome you. 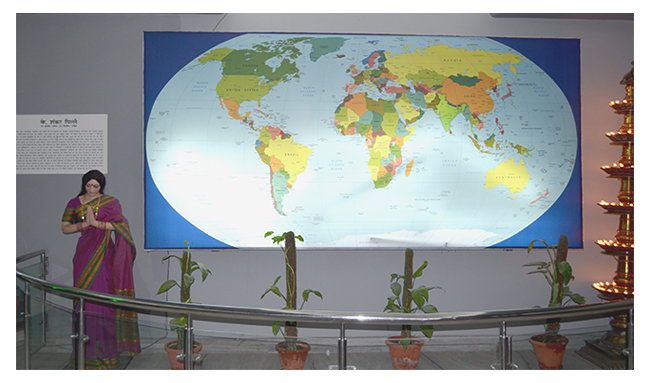 From life-size dolls to miniature ones, they were in various sizes. Most of these handmade dolls are of clay, cloth, wood, bone, leather, straw, porcelain, plastic, even terracotta. You will be amazed to see one 250-year-old doll from Switzerland, scenes from the Ramayana, Kabuki & Samurai dolls, Thai dolls depicting scenes from the Ramayana or the flamenco dancers from Spain, just to name a few.

There’s an exclusive section on Indian dolls. Here you can find dolls as brides and grooms from different states, a group of dolls showing how to wear a Saree (ethnic dress), step-wise, folk dancers from across India, scenes from mythology, history, Dandi March, Man on Moon, life size doll of a snake charmer and many more. Favourite dolls…that will be extremely difficult and I don’t want to differentiate. All of them are my favourite. 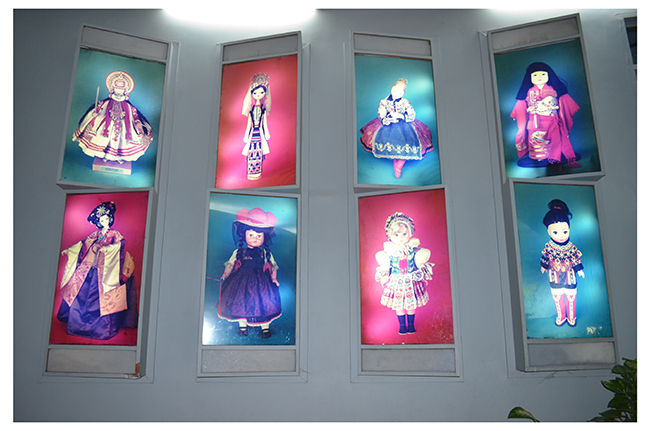 Photography is not allowed inside…

So, what are you thinking? The summer is already here in this part of the world…your kids are eagerly waiting for the long awaited summer vacation and have so many plans to enjoy their vacation like to attend summer camps, going to hills or sea, other places of their interests or also to go to their native places to meet everyone, so you are. You must also want to spend some  happiest moments with them in between. So, if you are visiting Delhi, you may plan to visit this museum as well and for Delhiites, even if you have visited the place during your school days, go with your kids. This Museum is a must visit for everyone who loves dolls and this write-up is also for those who are not, go fall in love with them and relive your childhood.

A visit to this museum would have a great impact in a child’s mind. There is a great educational value as well. Almost every country is inhabited by a people differing in manners and habits, language, religion, dress. Such visits will help them to know about different countries, to distinguish between individuals from other races, how very different they all look, to learn how people in different countries dress up during their festivals or their way of living.

These dolls are a visual delight and their expressive faces will definitely remind you to come back once again.

ps.: Photography is not allowed inside, hence you will have to go and enjoy yourself.

If you still have some time, there is one unexplored spot near Dhaula Kaun. I heard about the place, but never thought to visit. While returning to Gurgaon, the idea to visit the place came to my mind since we have few hours in our hand. After identified the spot with the help of google.com, we proceed to Delhi War Cemetery. 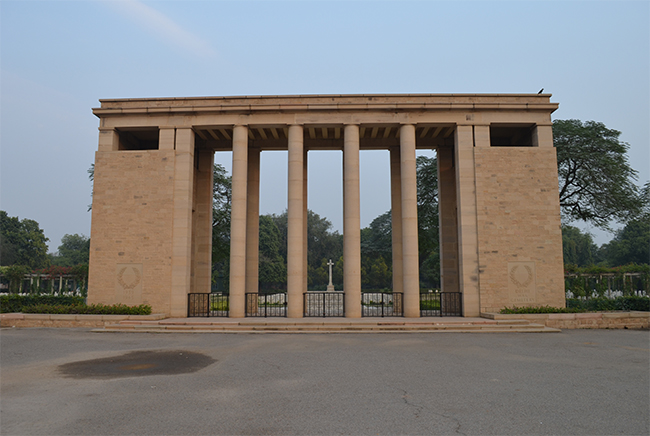 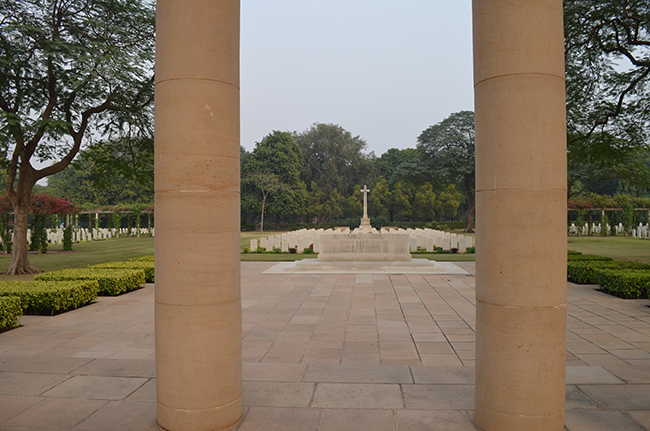 The neat, beautifully landscaped and manicured lawns of the Delhi War cemetery are now home to the remains and memories of many soldiers who fought for the British Commonwealth, especially on the Eastern Front during World War II. 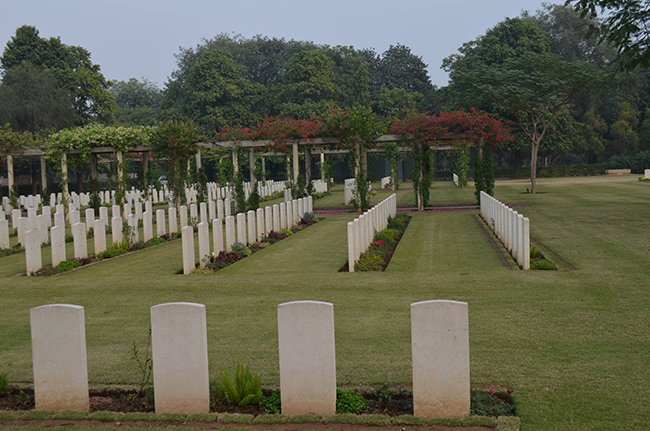 …and they live here forever

Delhi War Cemetery was created in 1951 to ensure permanent maintenance of graves from many cemeteries in Northern India. Graves were moved from cantonment cemeteries in Allahabad, Cawnpore, Dehra Dun and Lucknow, including 99 First World War burials from Nicholson Cemetery, Kashmir Gate in 1961. 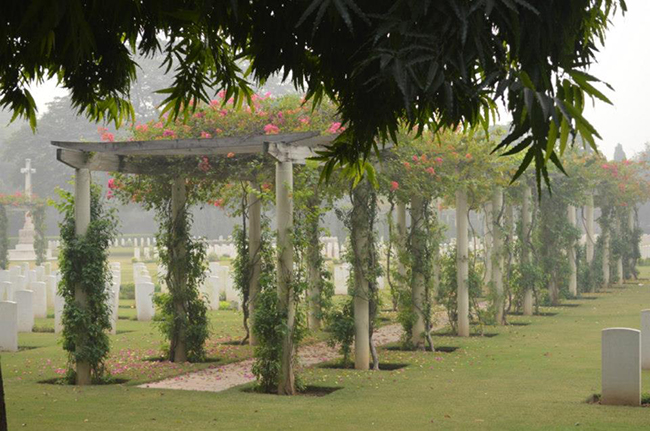 An identical memorial stands in Karachi War Cemetery. No names appear on the memorials but a Roll of Honour at each site, one in Hindi, the other in Urdu, record the names of those commemorated.

From Daula Kaun, take the Ring Road in the direction of Naraina and proceed towards Delhi Cantonment. Exactly after 3 km, you will reach Brar Square traffic junction (adjacent to BASE Hospital). At present the crossing is blocked due to Metro Work, so drive another 1 km and take  ‘U’ turn from the flyover. Take a left turn over the railway crossing and after approximately 1km, you will find the cemetery on the right hand side of the road.  Don’t go there in the evening, as the road is almost empty and I would recommend going there in a group, if traveling with family.

A date with some unexplored places of Delhi was last modified: June 7th, 2021 by Amitava Chatterjee

Shivam is very much fond of bathing in River and sea so he started taking off his cloths and I was also excited to take a holy dip as soon as possible, so without wasting time we both put our first step in the pond, since it was hot that time so we felt this bath pleasant.