So after paying my respect at Jwalamukhi temple, we proceeded towards Kangra.   The divine flames of Jwalaji had filled our heart with energy and positive feelings.  We were very happy and in good mood for our onwards journey to Kangra. The route from Jwalamukhi to Kangra (35 Kms) is scenic and dangerous.  This is the only patch in this area which has many solid mountains otherwise at this height, we find only the lose stoned hillocks which are prone to landslide during monsoon.

We by-passed Rani Taal, a railway station for the toy train coming from Pathankot.  Just after Rani Taal, a road towards left goes to Masroor, the famous mini ellora of Himachal.  We continued on the main road towards Kangra and Dharmshala. 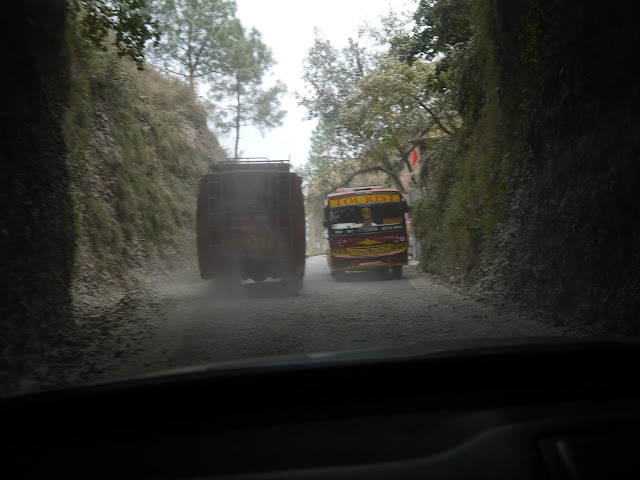 coming out of tunnel

We crossed the only tunnel in the way and after the tunnel, we were welcomed by beautiful and green valley.  The toy train railway track crosses way many times.  We waited for some time to take a photo of the toy train, but were disappointed. 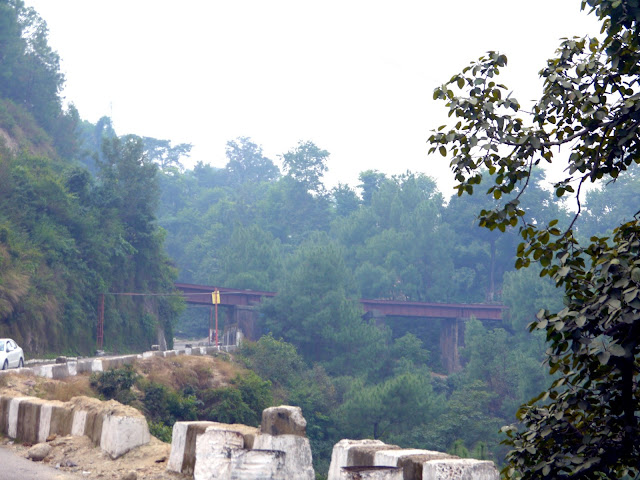 Beautiful way to Kangra, with toy train bridge in background

As on way to Shimla, this route is also infested by monkeys.  Many cars stop there and throw eatables to monkey despite the fact that at many places the administration has barred people to give eatables to monkeys.  This causes many accidents and feeding the monkeys, disturbs their natural habits as they stop searching for food and wait for the people to give them food, which is not suitable for their stomach.  Thanks to Maneka Gandhi, the population of monkeys has increased manifolds.

Any moment we halted, a group of monkeys would appear from no where and see towards us, as if asking – अबे कुछ खाने को देगा क्या ?? 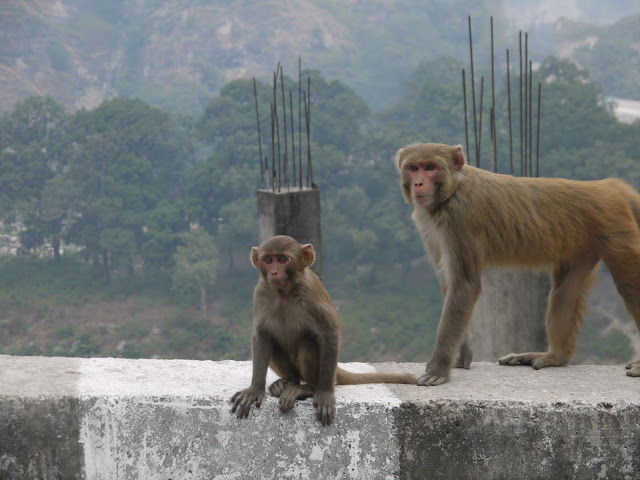 We ignored the monkeys and continued our journey towards Kangra.  One has to drive very carefully on this road, because the road has sharp curves, heavy traffic and deep gorges.  This road is also infamous for fatal accidents.  The sides are so steep that if a vehicle skids off the road, it will reach the ravine, by air… as the  mountains are wall like at many places.

We were fast approaching Kangra and the Kangra Fort was visible.  Earlier when I brought my son to Jwalaji, my son got a promise that I will show him Kangra fort too.  My son had no interest in temples, but deep interest in history.  We had then visited Kangra Fort and were fascinated by its magnificence. 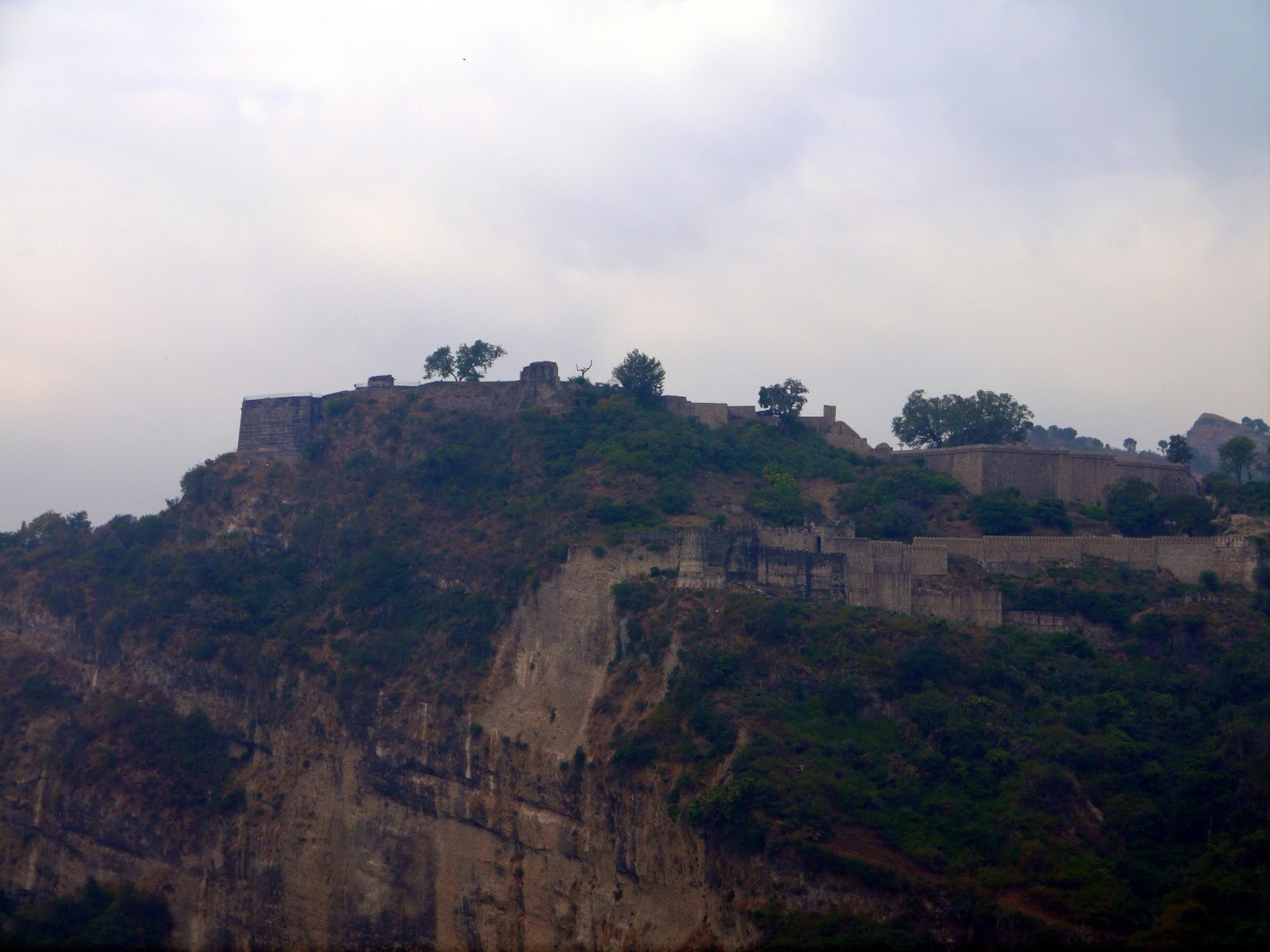 Kangra fort was built by Katoch rajputs of Kangra and was almost invincible, due to its mere geography.  The fort is situated on a wall like mountain, surrounded by a deep and fast flowing Baan Ganga river from three sides.  Fourth side had dense forest.  Many Muslim invaders tried to win it but were always defeated.

It was due to treason  of one minister of the king that the fort was finally won by Jahangir, the mogul king.  The traitor minister asked moguls to make him the king and revealed the secret entry point to the invading army.  However, the minister was beheaded by the invading army after conquering the fort.  A good lesson for traitors !! 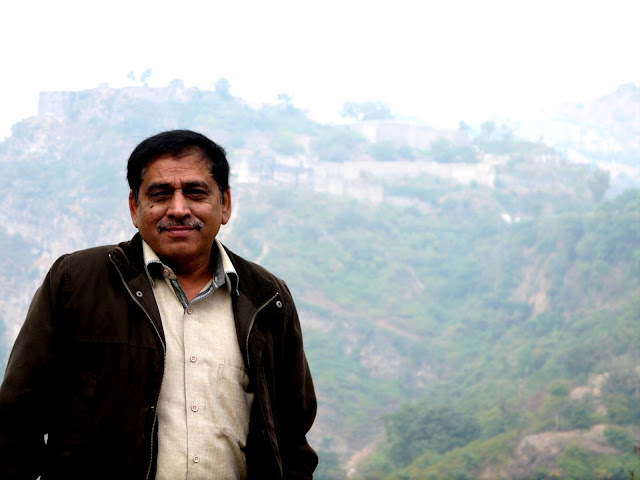 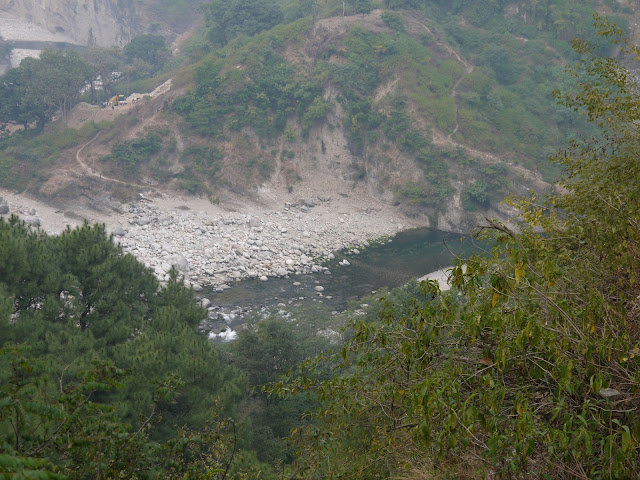 It was after the fort was conquered that the mogul army destroyed and looted the famous Kangra temple of Brajeshwari Devi, where we would be going next.

The toy train bridge crossed our way for the last time.  The high beams supporting the railway tracks were still strong enough to carry the weight of the train, even after 100 years… tks to British 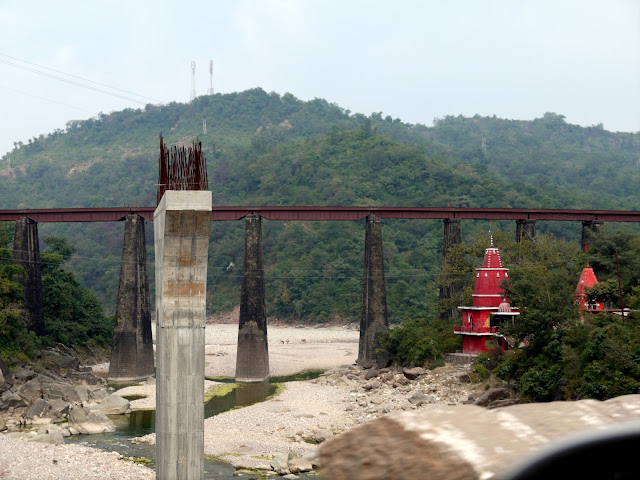 After crossing the old iron bridge over Baan ganga, we entered the beautiful city of Kangra. 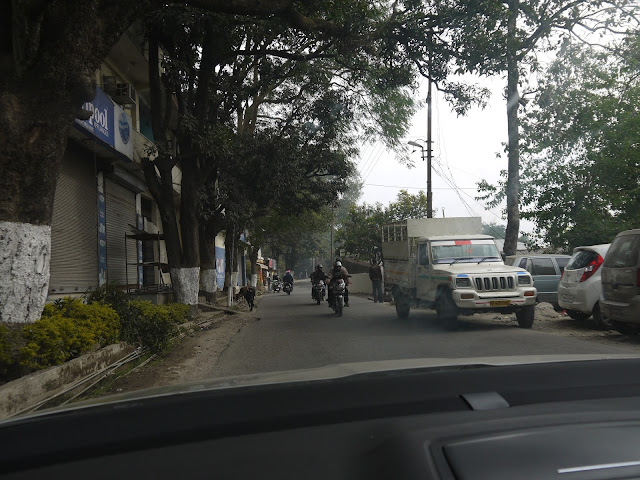 On reaching Kangra, we entered the busy bazar and there was a car parking near the bazar leading to Brajeshwari Devi.

Brajeshwari Devi or Nagarkot ki Devi temple is historic temple in Kangra valley.  This temple alongwith Chintapurni and Jwalaji, makes a perfect Shakti Trikone, which is adored by all Devi Bhaktas.  This Shakti Trikona is mentioned in our scriptures as Jallandhar Peetha. 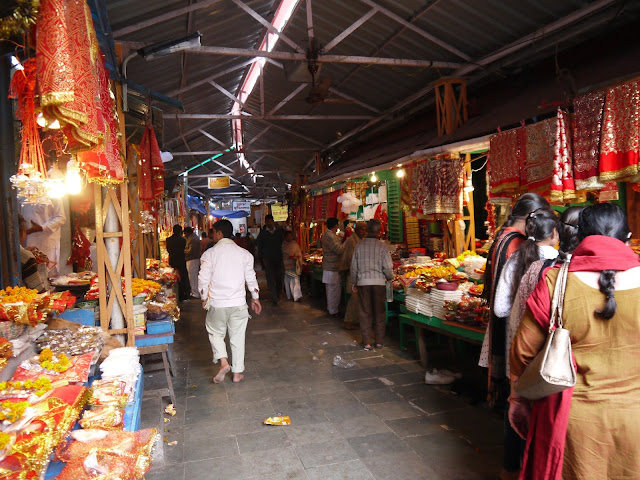 Passing the long bazaar we reached the main temple.  Brajeshwari Devi is a deformed name of Varah-Yogini.

It is also said that left breast of Sati fell here hence it is also a shakti peetha.  Pandavas when came to the village of Nagarkot (now Kangra) they saw a dream of Durga who asked them to make a temple in her name.

This magnificent temple was looted several times, but each time it was re-built with more galore.  The first of the plunderers was Mahmud of Ghazni, who looted it in 1009. A mosque was built on the ruins and a garrison was left behind. 35 years later, the local king regained its possession. The shrine was repaired and a replica of the idol was enshrined. The temple was filled with gold, silver and diamonds only to be ransacked again in 1360 by Firoz Tughlaq. Later Emperor Akbar visited the shrine with his dewan, Todar Mal and restored it to its former grandeur. The temple was razed to the ground by an earthquake in 1905, but a new one came up the very same year, thanks to the Kangra Restoration Committee 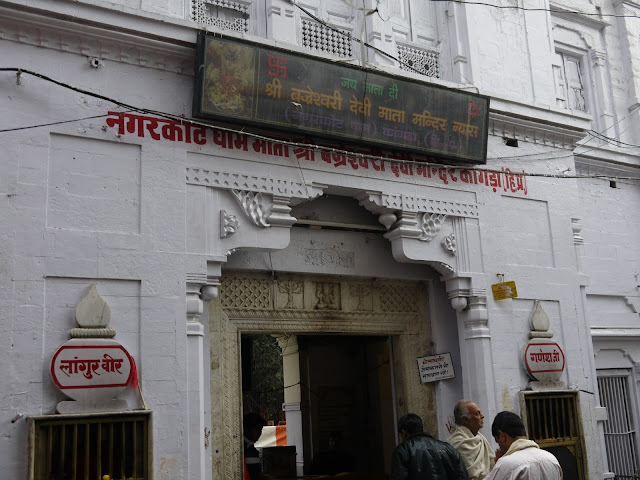 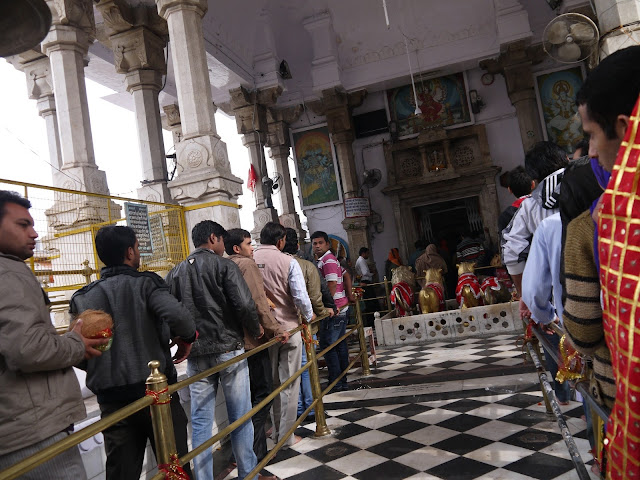 This time also the temple was full of people and a long que before us.  Lakshman revealed that he knew someone here who can arrange early darshans for us. But I declined the idea, as I did not want any special favours or any dishonesty in entering the temple.

I had come to this temple after some 10 years and I remembered that Dhauladhar snow range was visible from inside the temple…but that scene was missing now, due to clouds perhaps. 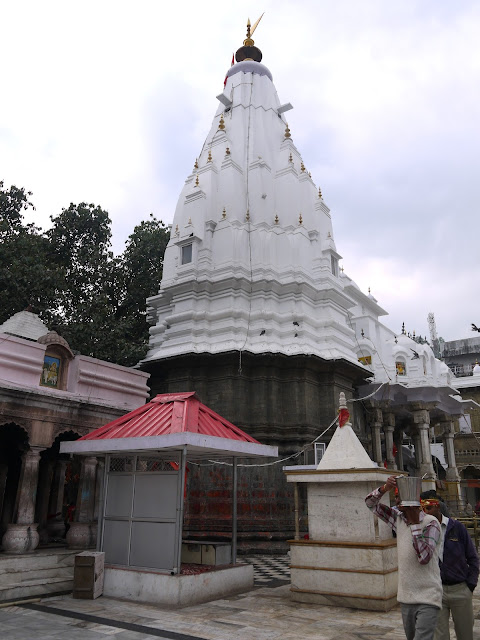 Like in other temples, this temple too had a very old banyan tree.  People had been tieing red Chunnis as a request to the goddess to fulfill their wishes 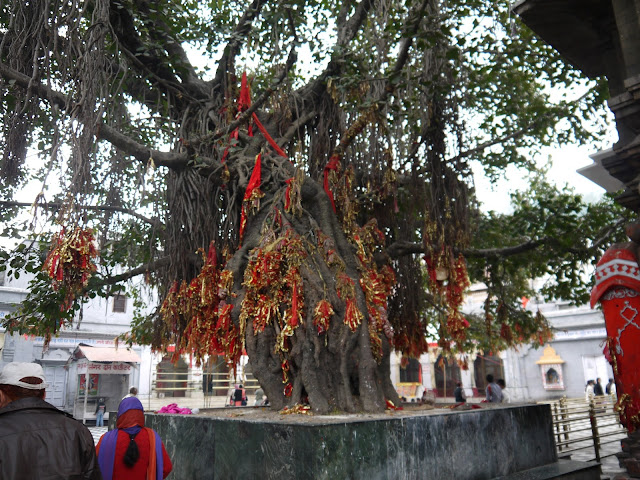 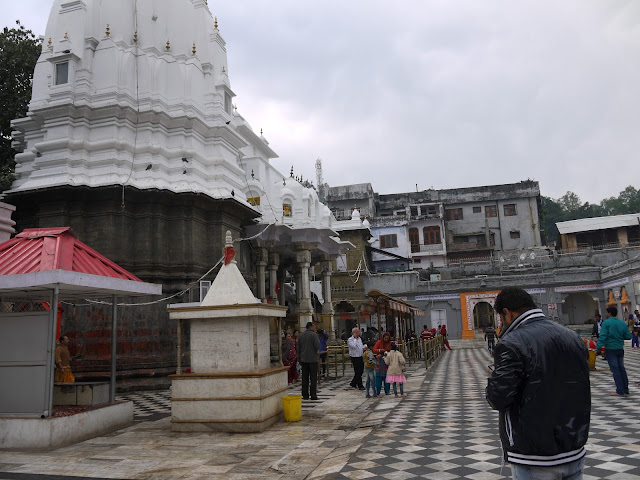 Another view of Kangra temple 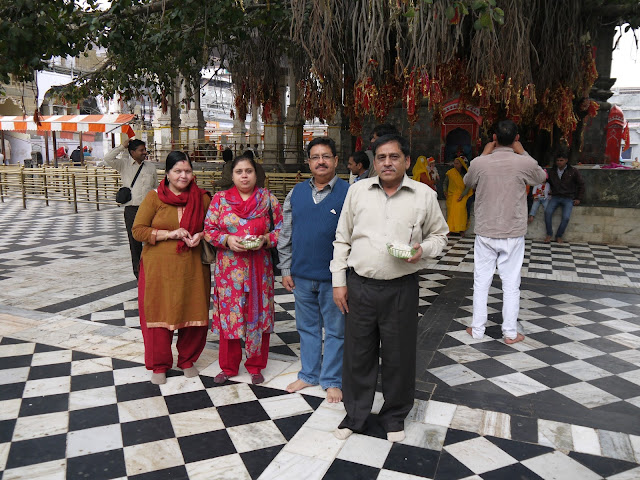 In about one hour we were out after having darshan of the Pindi of Brajeshwari Devi.  On Lohri day, each year this pindi is worshipped with butter, ritualistic applying of balm on the wounds of Durga, after her fight with Mahishasura. 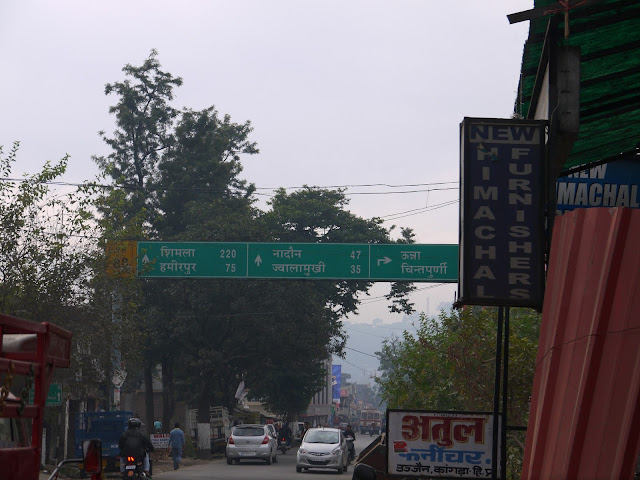 We came out of temple, had some refershments in Kangra bazaar and started our onwards journey towards Palampur

“Is it possible to see Washington D.C. in a day?”, my friend asks. “Of course it is possible”, I reply confidently, just like it…