Day two started off with a bright sunny morning and the Tavera waiting all set to begin the local sightseeing. A sumptuous breakfast and an all-smiling jovial face of our Chauffeur made for a perfect start. We headed off for the first view point Handi Khoh, also called the suicide point. It was a sheer surprise with impressive ravines having 300 feet high precipice and so very vertical sides. 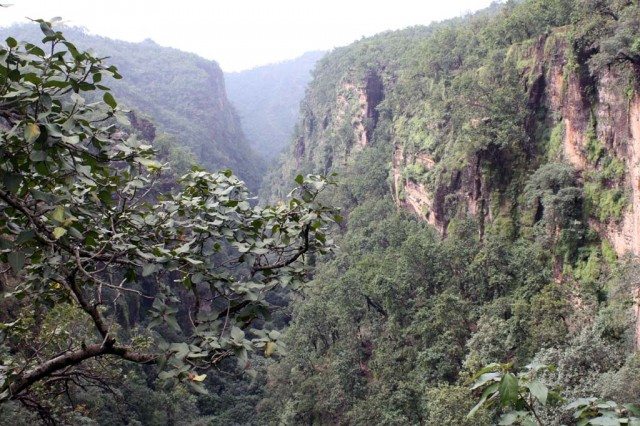 Breathtaking beauty of the Satpura rock strata that made the ranges stunned us – especially the coloured bands of distinguishing ancient rock layers where Geography met History. Next destination was Priyadarshini or the Forsyth Point. 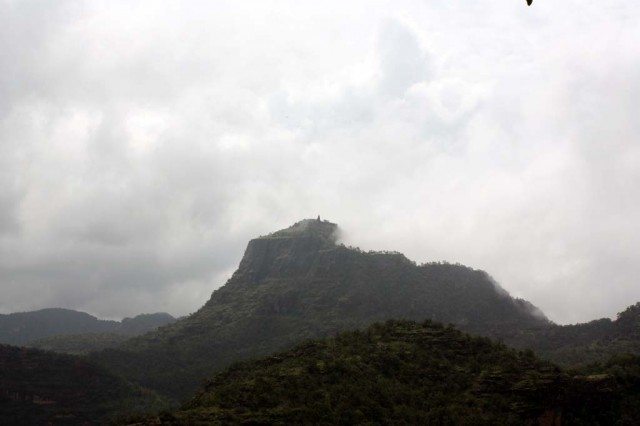 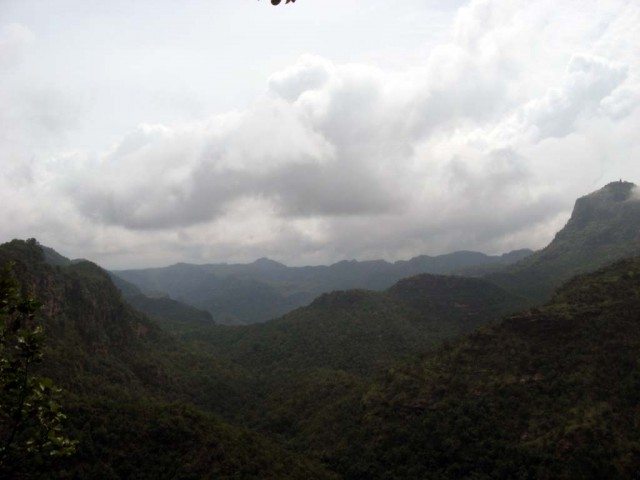 Rain clouds and the folds of blue mountains from Priyadarshini

The point owes its name to Captain Forsyth who discovered it in 1857 when Pachmarhi served as a British getaway from which you can admire the beauty of the Satpuras, the protruding mountain shapes stretching out into the sky alluring you to climb upon and touch the skies. Next, we headed for Bara Mahadev. It turned out to be a huge shrine of Lord Shiva with an impressive Shivlinga and also has a cave shelter beside it with beautiful cave paintings. Next, it was the turn of visiting the Chota Mahadeo, also called Gupt Mahadeo, explicitly making it obvious that we were right into the lap of Shiva’s own domain. It was a religious spot in a narrow ridge of the protruding rocks in the valley with the gushing water of the streams speeding past. There was also a larger-than-life idol of Hanumanji, seeming to guard the entrance to the sacredness. After this, it was already lunch time and revolting empty tummies dragged us back to the resort for our lunch and a couple of hours of rest. 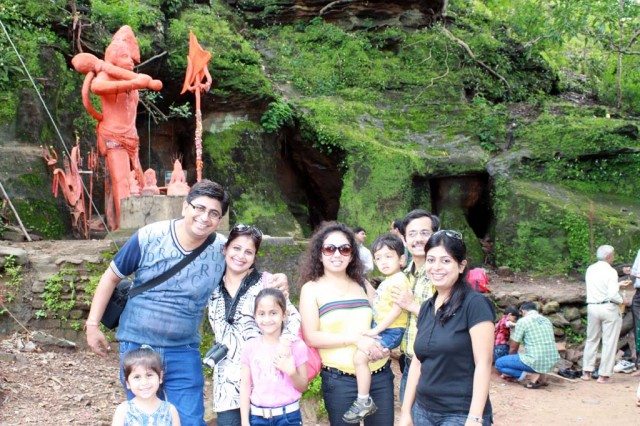 The post lunch session started off with a glimpse of the magnificent Protestant church (also called Christ Church) at the heart of the city. 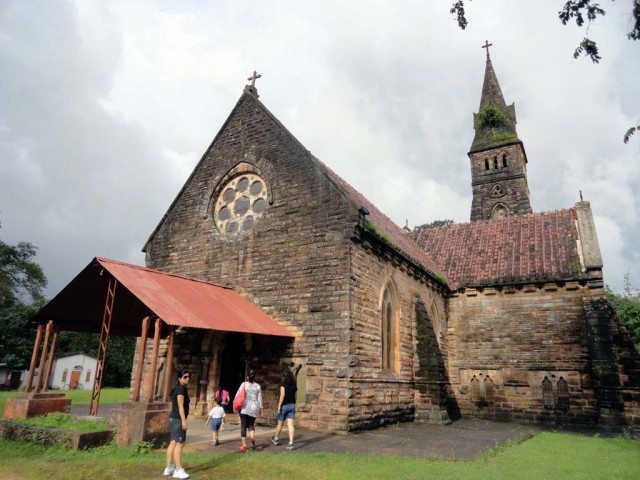 The fading sunlight streaming in from the stained glass work of the Church windows created magic inside. 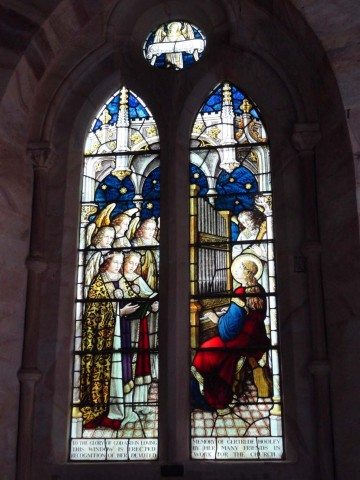 The interiors were as magnificent at the external structure and engendered ferocious religiosity where the elders reverently sat down at the front row of the laid benches with folded hands even as the eyes were taking in every architectural detail of the structure. Evening tea was waiting for us at the Rock End Manor, supposedly the most expensive nest in Pachmarhi inhabited temporarily by the film stars, starlets, and other celebrities whenever they step in this hilly town for business or pleasure. 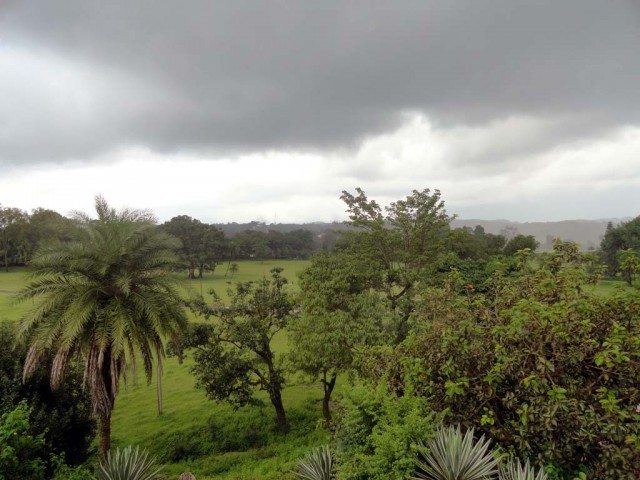 View from the Rock End Manor

We enjoyed the expansive views, the USP of the hotel, I guess, and moved off to the next destination. Rain had started dripping and by the time we reached the next astonishing sacred cave of Jata Shankar, it was pouring. To avoid getting drenched, we decided to go around the quaint little mysterious town and crossed clumps of picturesque eucalyptus creating unparallel beauty, green grassy meadows, a little market with tiny shops selling varied items, and the muddy ponds and streams. By this time, rain had thawed and we headed once more for Jata Shankar. It was a dark deep surreal cave creating mystery and myth. Nestled under mass of loose boulders and with a gushing stream oozing darkness and hazy smoke from drizzling rains, Jata Shankar was indeed unreal and hence its beauty was obscure. Satisfied with the day’s events, we came back for our quota of dinner and retire for the night. 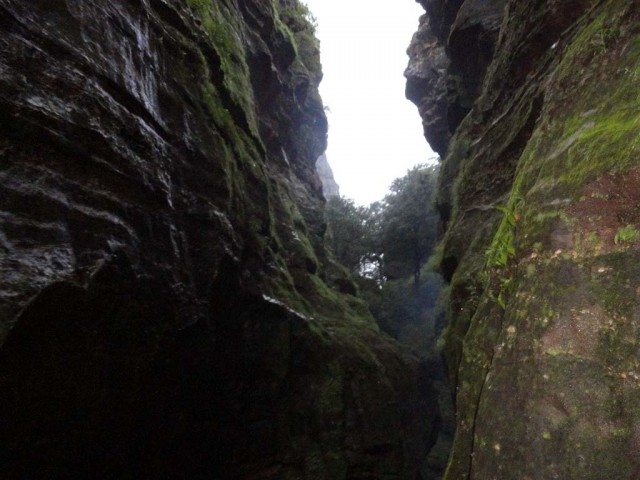 The surreal caves of Jata Shankar

Day three started off with breakfast in the similar lines. Sightseeing started off with Bison Lodge that was constructed in 1862 making it the oldest existing house in Pachmarhi. The lodge was a sort of museum and had a lot of native animals and cave paintings, a model of a miniature representation of the real-life worth-seeing spots and preserved remnants of the native animals of Pachmarhi, such as tiger, lion, bison head, snakes, insects and the wide variety of local trees found. 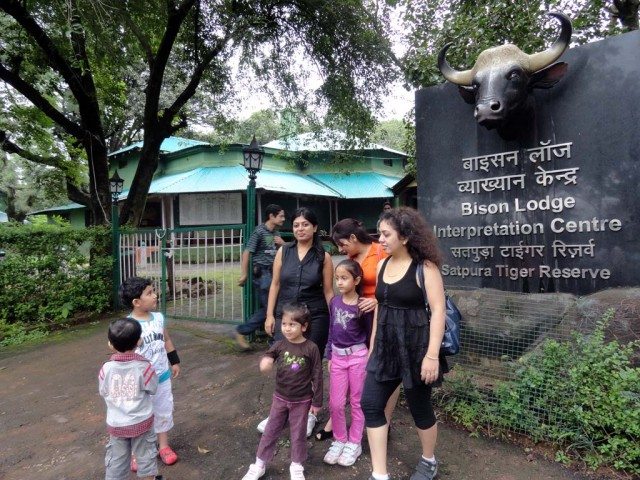 In front of Bison Lodge Museum

Each object was patiently explained by the knowledgeable guide who was able to satisfy all curious questions from the young and the old. Then, it was time for the Pandav Caves. Five caves, now protected by the authorities, stand in three layers with a manicured garden surrounding the rocks sheltering the caves. You could get a nice view of the surroundings from the highest tier. Climbing was not very difficult as stone steps have been built, though it was a bit slippery with all the rains and the mud. Pachmarhi is said to have derived its name from these five caves (Pach meaning five, and Marhi meaning caves) and it is said to have a mythological significance as the Pandavas from The Mahabharata are believed to have taken shelter in these caves during their 12 years of forest life. 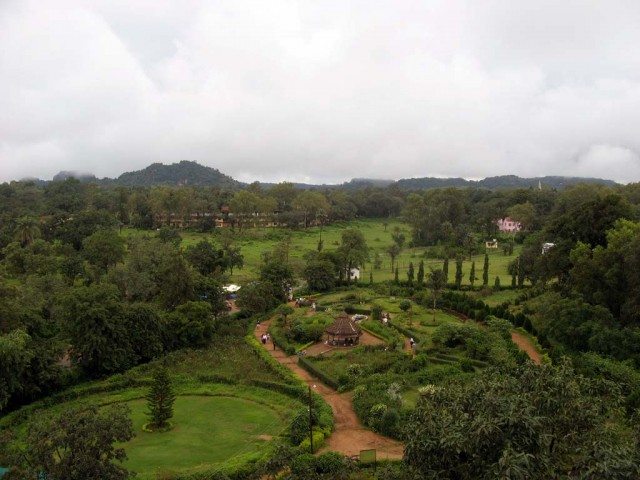 Pandava Caves at the backdrop

From there we headed to the Bee Fall, the first waterfall that we are going to visit in this trip. Given the steep trek of 2.5 kms down into the crevices to be a party to the brilliant white waters tumbling down from 150 meters high bare rock face, it was difficult with the children. The two tiniest of the lot were given to be carried by the guides on a chargeable basis of 200 Rs. each. The trek was worth it which we realized once we reached the bottom. A refreshing bath in the fall waters erased the traces of muscle fatigue. 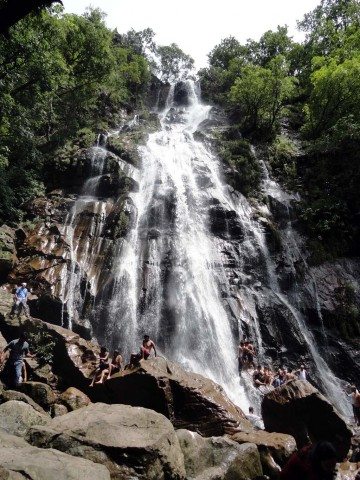 This tumbling fall is the place where the Liril beauty had bathed shooting for the famous old Liril ad, reminded our guide. The climb uphill was multiple times more difficult and tiring. Glasses of nimboo paani, cola, maggi and chips at a vantage point in between did us good. By the time we returned to our cab, we were ready to drop off at a leaf fall and decided to get back to the resort to catch back our breath and have our energizing lunch. In the evening, after the lunch and a brief rest, we went to visit Dhupgarh. 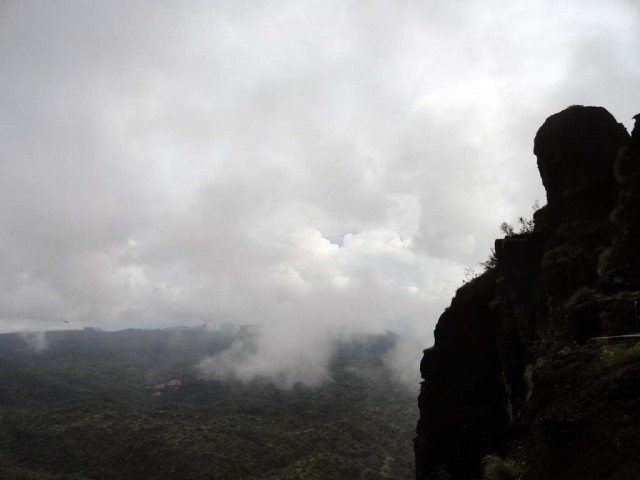 This highest point between Himalayas in the North and the Nilgiris in the South, offered wondrous views of the smoky hills and floating clouds playing hide and seek with the mountain tops of Chauragarh. The hazy rocky outlines got hazier with the rain starting to pour. This is also the sunrise and the sunset point giving a bird eye view of the entire Pachmarhi city. We could spot the white-socked bison crossing the mountains paths and disappearing into the adjacent forests through the cloudy smoke. After a wild session of photography, we decided to creep back to the bungalow and settle for our evening tea/coffee snacks. We returned to the Champak Bungalow to find another bunch of nine families had arrived from Mumbai and had spread their laughter, kids, belongings, shouts, cries, and enthusiasm all around. This jovial group was busy getting muddy and wet with an ancient game of pittu garam in the green stretch in front of the bungalow. After dinner, we lingered along a bit gossiping, enjoying the misty downpour and planning the day ahead, with the babies running about excitedly with more babies from the other group.