Life is a journey and journey with in life makes it more interesting. This becomes awesome when it is by Meter Gauge Train. Through Google Baba I came to know about Lothal, a harappan excavation site just 78km from ahmedabad. I am sure everybody must have heard about Lothal in school history books same do I. Now It’s a golden chance for me to explore Lothal so I along with my wife planned a Sunday Visit to Lothal via meter gauge train.

We reached to Gandhigram Railway Station in ahmedabad at 8:45am (its hard to wake up early in weekends). Train was scheduled at 9:00AM; we took the ticket of Rs. 20 each and boarded the train.  Gandhigram is a peaceful station with handful of passengers. (I never thought a station like this can be in the middle of a metro city)

Train was not very much crowded; it got passengers in equivalent ratio to its capacity. Though we were late but we got a window seat very easily (getting a seat is luck and getting a window seat is god’s gift). Indian Diverse Culture is clearly visible during the whole journey. Young group of girls wearing beautiful ornaments and with a smiling face boarded the train; I thought I didn’t saw such a single happy face in the near past. Either its natural environment of village (prakriti ka sparsh) or attitude towards lively life whatever it is; it is really admirable. In the running city life and always lack of time scenario make us forget the peacefulness of nature. During these thoughts train left the platform at 9 o’clock sharp but stopped soon after (later we realized it is the fitarat of this train). People were busy in talking and eating. Nobody is bother about train halting problem as happens in express trains; people get angry over the Indian railways, rail minister and even see corruption in the same. People de-board the train and catch it again when it gives horn (the caring train gives sufficient time to get back).

We constantly looking through the window and talked about flowers, birds, animals, various varieties of zoology and botany things (a bio-expert wife is very helpful and knowledgeable in this case and I am blessed with this). After 2 hour journey (at 11:00am approx) we arrived at Lothal Burkh Station. It’s a sub urban station with no facility at all. Lothal site is 6km from the railway station but there is no convince facility available. A local man suggested a trolley van leaving in that direction. We got to the trolley and completed rest of journey in standing position with few co-travelers. It was an amazing experience traveling on a long road between large green farms of wheat, with hurdle-less blowing wind. 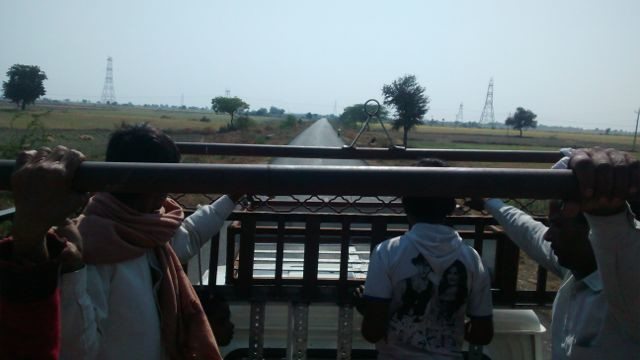 In the trolley van.

After 15mins we saw a board bearing direction to the Harappan site; we came to know its 2km more. While talking I came to know that Cambay is just 70km from there on that road. An advanced extended trip could be made if interested.

I closed my eyes and allowed the wind to go through my face. It’s like surrendering self to the nature in form breeze. I opened my eyes when driver told us to de-board. 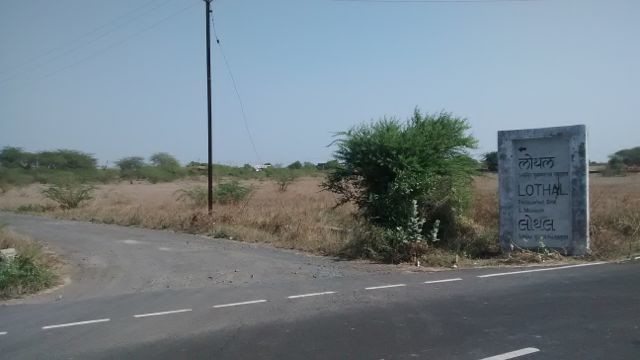 Excavation site is walking distance of half km from there. Sun is at its peak but cool breeze was maintaining the temperature. At most 20-30 people were there including the staff and visitors. We first visited the Archaeological Museum and it’s better to visit museum first because it contains a lot of information about the site and that will help you to understand and visualize the whole architecture at the site. As photography is prohibited in the museum so no snaps are available inside of it. 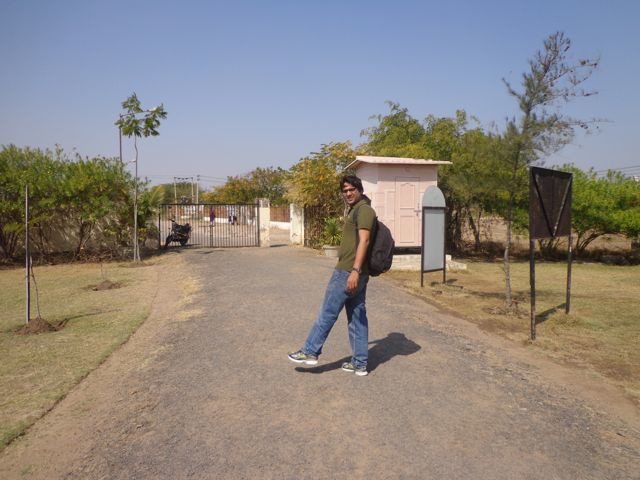 Museum visit is of 40-45 mins when you read all the things carefully else 5mins is more than sufficient. Museum consists of the beads, terracotta found during excavation process and many toys. Before going to the site I want to tell the information I extracted from the museum. For understanding I downloaded an image from google. Just walk-through the below map:

For further details you can go through the below picture. 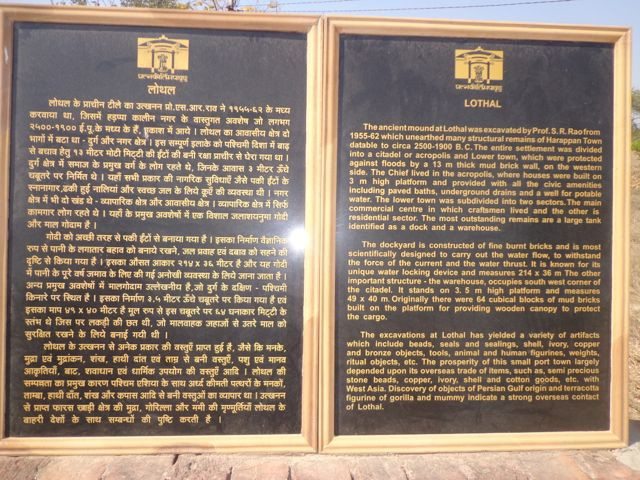 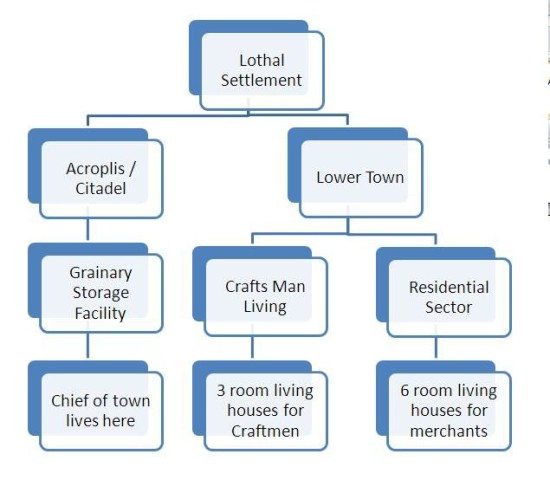 You can figure out the Dockyard (214 x 36 m) in the following snap. The dockyard is constructed of fine burnt bricks and is most scientifically designed to carry out the water flow, to withstand the force of current and water thrust. It is known for its unique water locking device.

In the next picture you can see the opening in the wall of the dockyard that goes to the river from other in form of small open tunnel to carry out water thurst.

Next snap is of Citadel also called as Acropolis. The chief lived in acropolis, where houses are built on 3m high platform and provided with all civic amenities including paved baths, underground den and a well for potable water. It is situated (see in the map) near to the dockyard because grains are used to store at this place so that can be saved from flood. 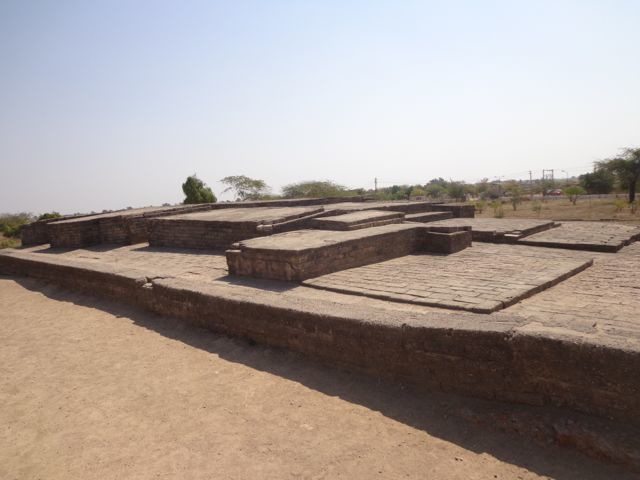 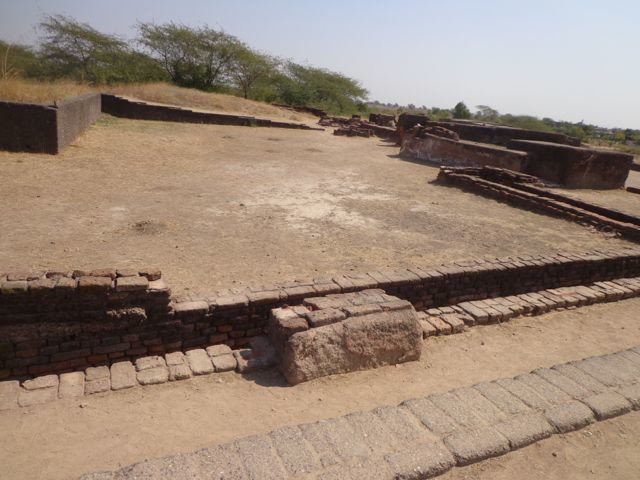 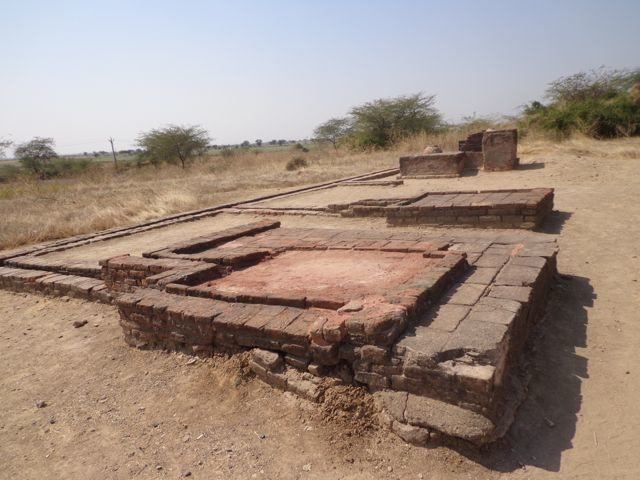 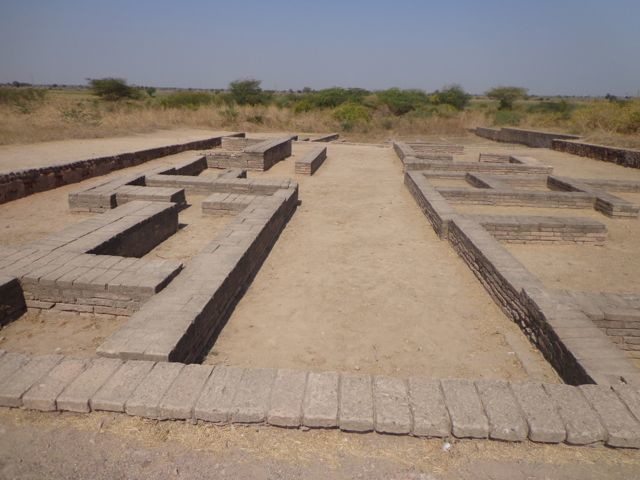 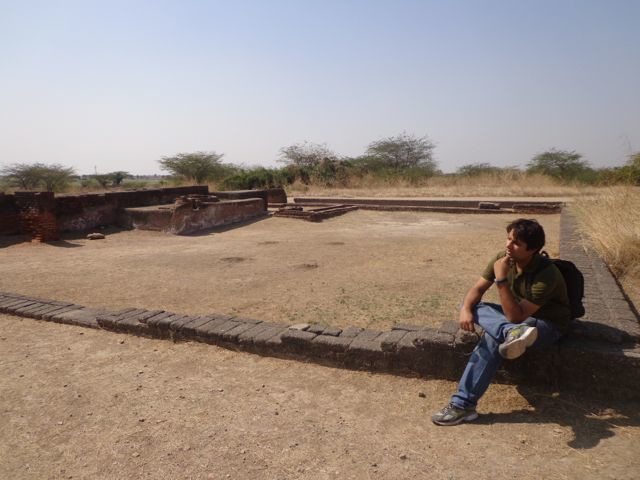 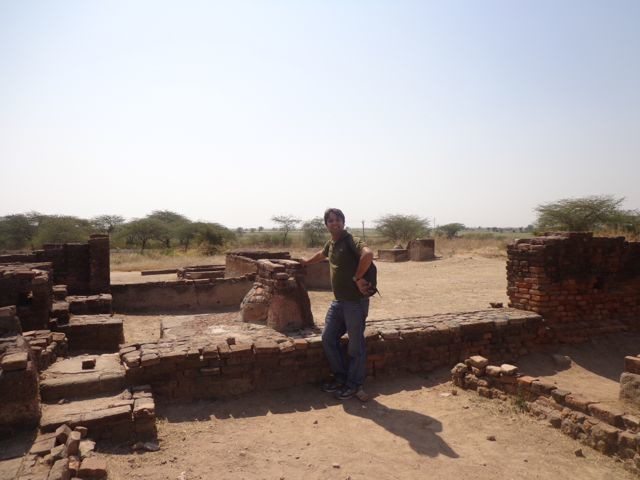 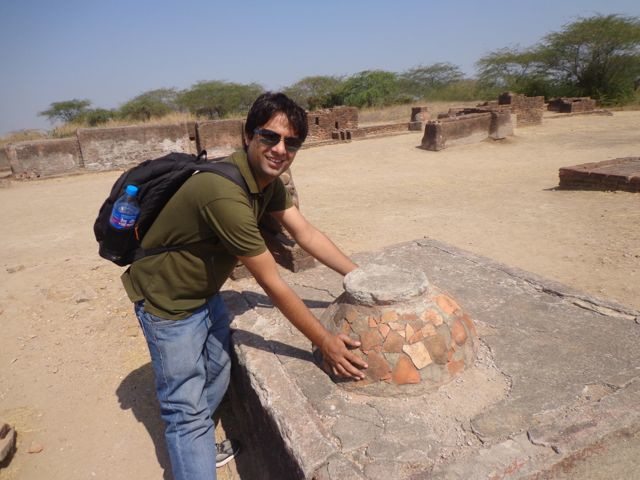 It took around 30mins and we were ready to back. Clock was showing 1:00PM O’clock so we headed towards the point where the trolley driver dropped us.

It was a sunny day and my wife was covering her face to avoid dust and UV Rays (she says so) all the time. We played with Sun.

Returning train was from Lothal Burkh Railway Station at 4:00pm in the evening and we were completed by 1:00pm so we thought how we would spend next three hours. We reached the spot. After waiting of half an hour there was no sign of any vehicle. We started photo shooting there. 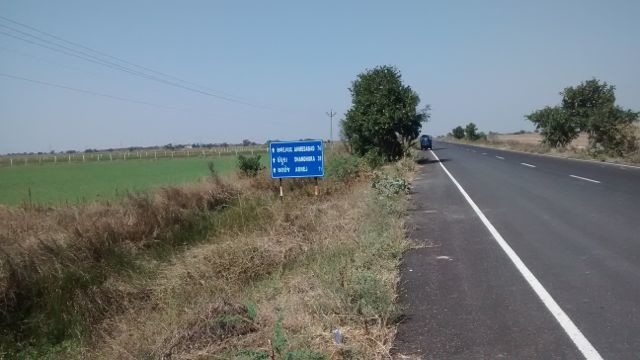 After 1.5h waiting we got a loaded trolley van. It was going to Arnej Railway Station; a next to Lothal. In such a deficient situation we decided ride. It was again a memorable ride we seated in open trolley hanging our feet down. 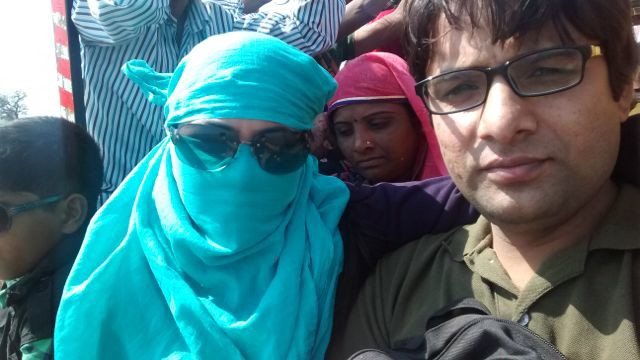 At 3:00PM we reached the Arnej Railway Station. Train to Gandhigram was scheduled there at 4:17pm. We asked a woman in waiting about nearby market and came to know there is a famous temple too. Its almost 1km walking we were in a village market. 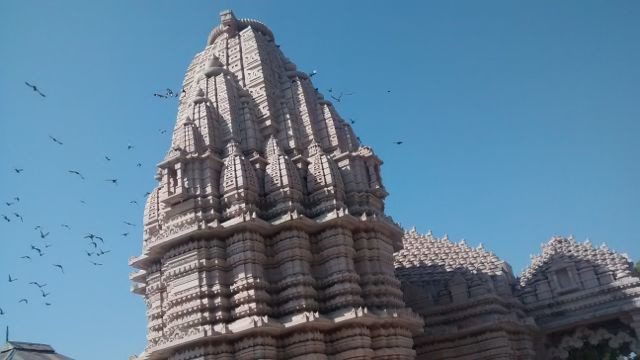 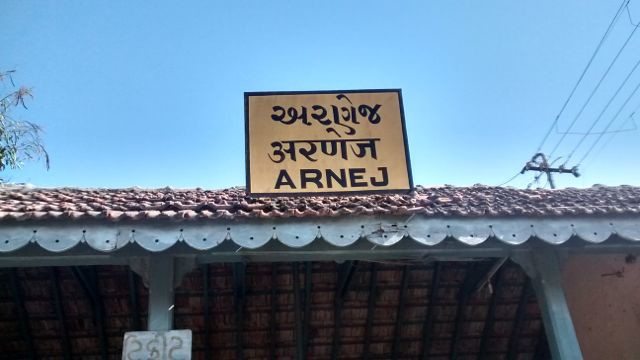 We came back to Arnej station at 4:00pm. Train was late by half an hour. Waiting is good when views are beautiful.

Train came at 4:45pm and we were back to Ahmedabad at 6:40pm. It was a memorable journey we learned a lot about ancient civilization and also searched a new grand temple.

Visit to Lothal near Ahmedabad : An introduction to Harappan Civilization was last modified: November 6th, 2018 by Shivam Singh

An Engineer, Works for GoI and presently posted at Ahmedabad. Balancing the eagerness of traveling and compulsion of Studying. Above all enjoying married life with my childhood love...

After a long tiring week, 3 people from Dental Provider Team (Metlife) decides to spend there time at some religious place. There are several…