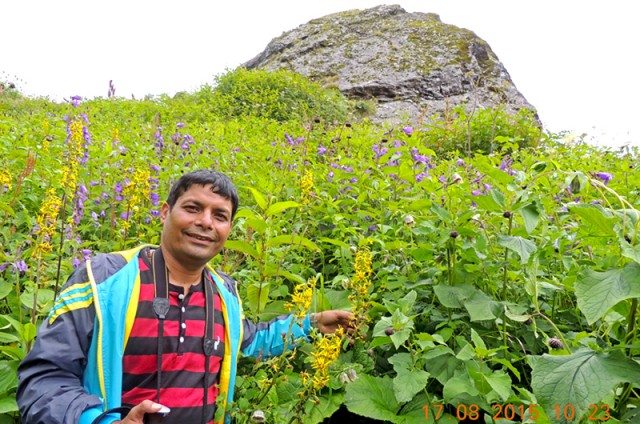 In the Valley of Flowers

Truly it would have been impossible for us, to take a step without crushing a flower, had there been no stone paves deep into the Valley of Flowers. We walked deep into the valley; saw many flowers of different colours, pink, blue, red, white, yellow and many others. Every single flower, though tiny, is so beautiful and colourful that none gets less attention from the visitors. These flowers are all wild. They vary in shape and colour at different altitudes. The flowers in the valley keep changing in different phases of monsoon. So after every 10-15 days of interval, a new set of flowers replace the old flowers and the Valley gets a new look every time such changes are happened. But do not expect to see any big flower in the valley as they do not reside here. 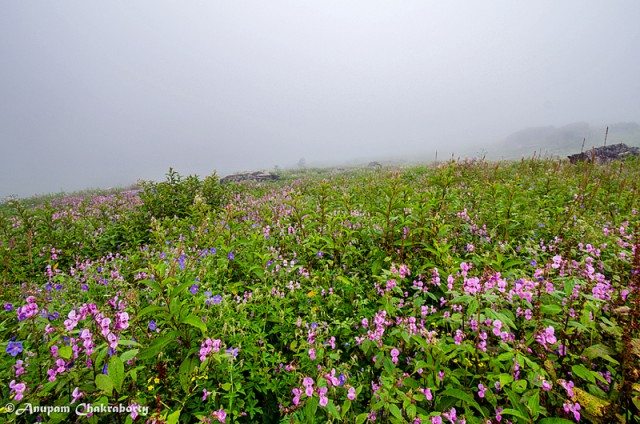 The magical sight of the Valley of Flowers

We reached the base camp, ‘Ghangaria’, yesterday. Ghangaria is a small settlement which remains open mainly during mid-May to mid-October when pilgrimage to Hemkund Sahib goes on. Surrounded by the high mountains, Ghangaria is a cold place with many hotels having basic amenities, and a Gurudwara where one can stay at free of cost. There are many restaurants here who claim to serve only vegetarian food though we found them serving omelets also. 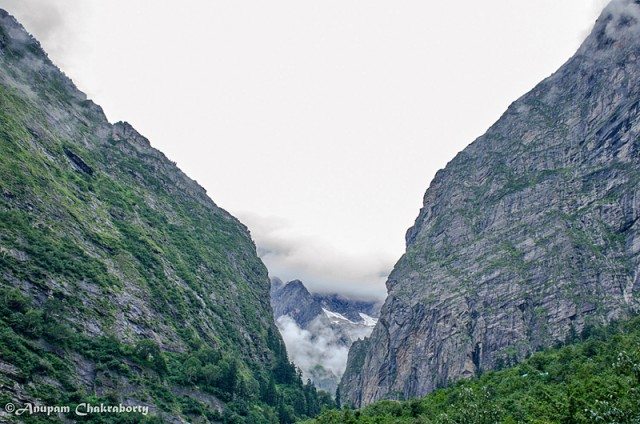 The Valley of Flowers is behind those mountains!

It was a cold and cloudy morning in Ghangaria. After the breakfast, we set out to the Valley of Flowers at seven in the morning. We climbed about 600 meters; here the trek bifurcates; the straight route goes to the Hemkund Sahib and the one on the left goes to the Valley of Flower. A few meters of walk on the left trek and we reached the Nanda Devi National Park entry gate where we collected our entry permit at Rs.150/- per head. 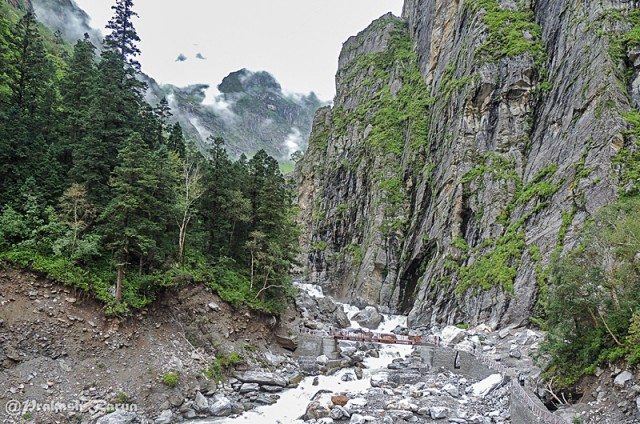 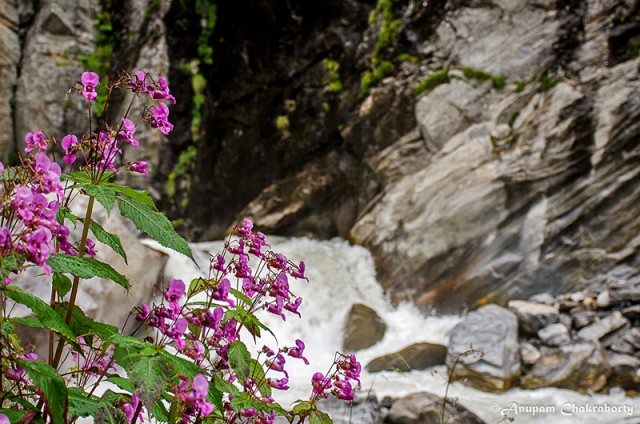 Balsams (Dog Flower) on the bank of river Pushpawati

After an easy walk of few more meters, we crossed an iron bridge over the river Puspawati that flows along the entire valley.  The actual hike of the trail starts from this point. Much of the trail before 2013’s devastating flood, as we were told, was along this river and was not as arduous as the present one which goes mostly through uphill to the valley. Continuing with the climb, we arrived at a point that was completely covered by the clouds. Ah! The magical clouds; they were hovering too around the magnificent surrounding peaks. 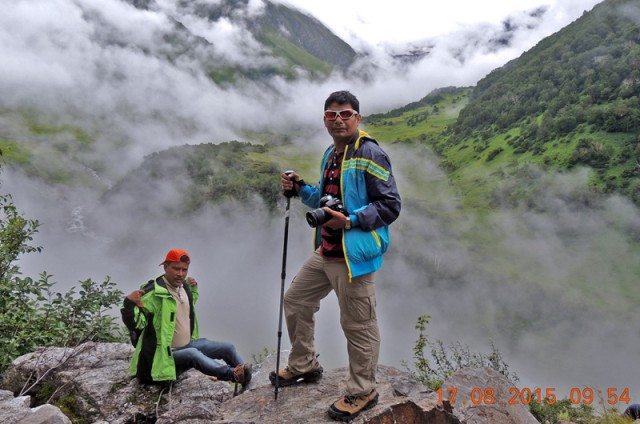 A walk in the clouds! 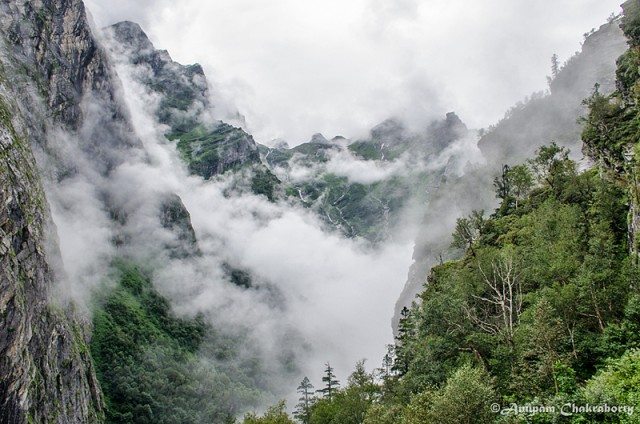 Clouds hovering around the mountain peaks

The steep ascent continued and along the trail we were encountering with many wild tiny flowers. We were engaged so much in clicking the array of colourful flowers that hardly exhaustion of the trail could lessen our gusto. Reaching to a spot, we stopped near a tree.  The tree looked very different. We were introduced first time with the Bhojpatra tree. I wondered how its barks were used in ancient times for writing. It is believed that on its barks Ramayana was written. They were many on the trail and it felt great to encounter with such distinctive species. 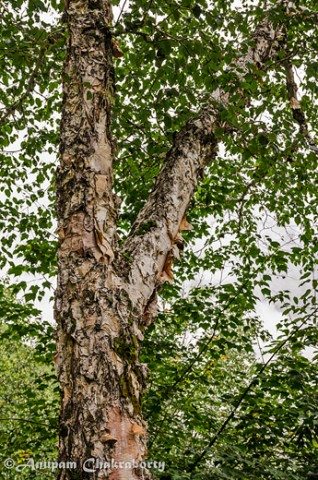 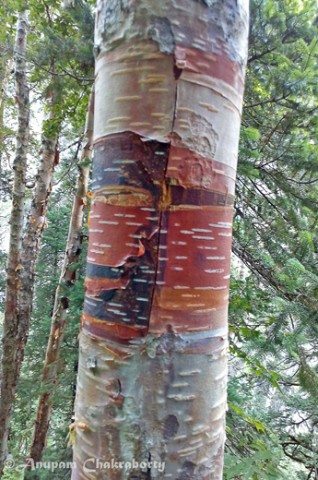 Bhojpatra tree – its barks were used in ancient times for writing

We continued the climb of about 2 Kms and arrived almost on a flat trek which continued to the main valley.  After a kilometer or so, the trail became narrower as the whole valley was carpeted by the hundreds of species of wild flowers, dominated mainly by pink flowers. 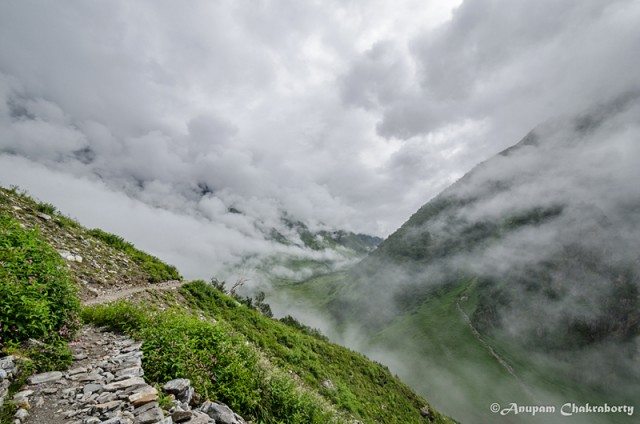 The trail to the main part of the valley 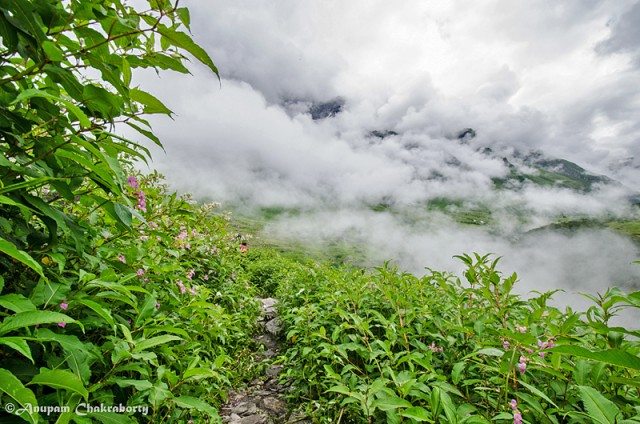 We continued trekking and..! 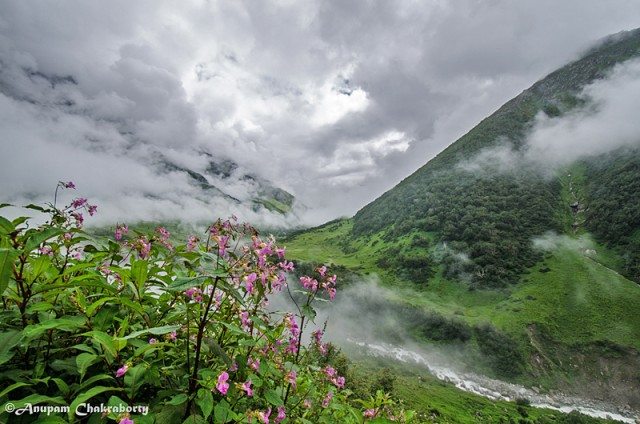 How one can get exhausted on such a trail! 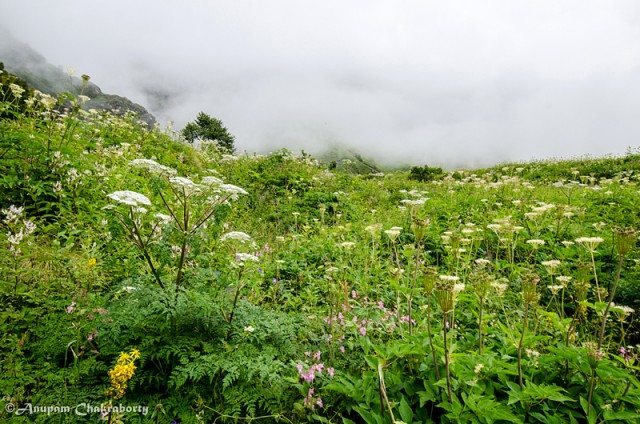 …..and the vista appeared!

As far as our eyes go, we could see vistas of flowers, the finest vista that the valley presents. Through the narrow path, not hurting any plants, we were moving ahead carefully. But luck was not with a few who unfortunately get mashed under our feet. 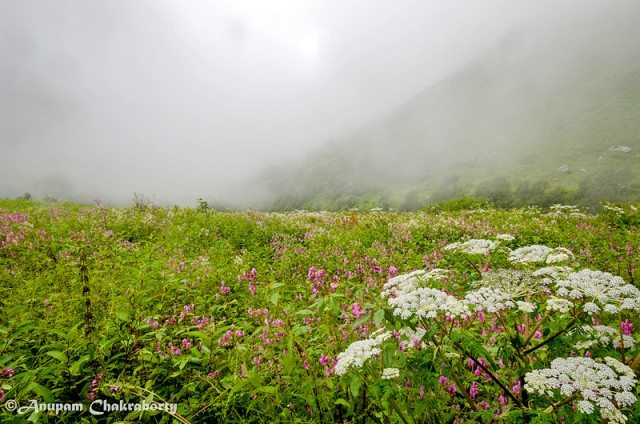 We now arrived near a giant rock; it provides the trekkers shelter from rain and a place for lunch. While a group of trekkers occupied the area for their lunch, we chose to continue with our journey further into the valley. 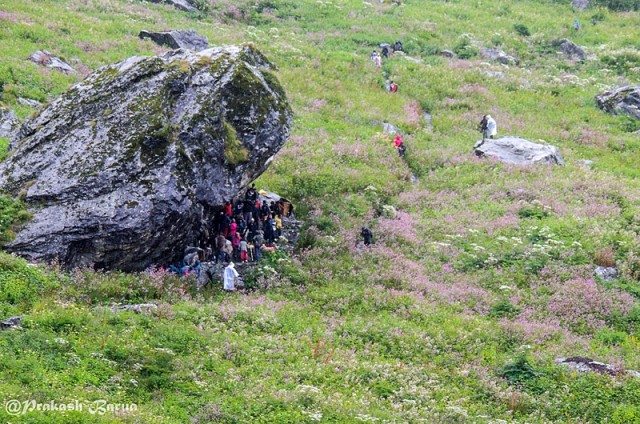 The rock in the valley which provides shelter to the trekkers

Most of the trekkers were returning from this point except a few who had the energy to explore little further. As we headed for some yards, weather changed quickly and all of a sudden it started raining heavily. Those who were not well prepared for the rain or whose cheap plastic raincoat (these are sold at 20INR in Ghangaria) could not shield them well, they had to run back and took shelter under that giant rock. My friend also joined them. 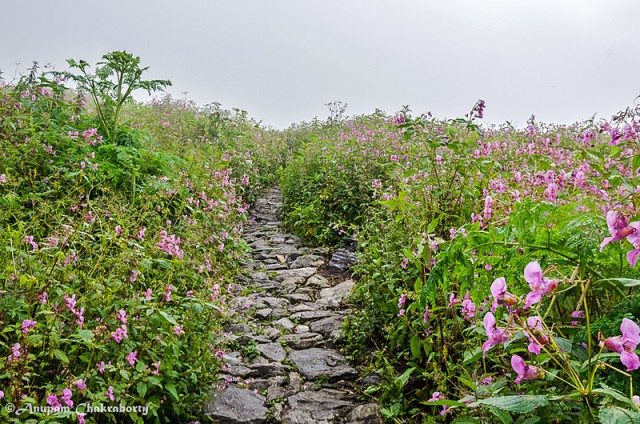 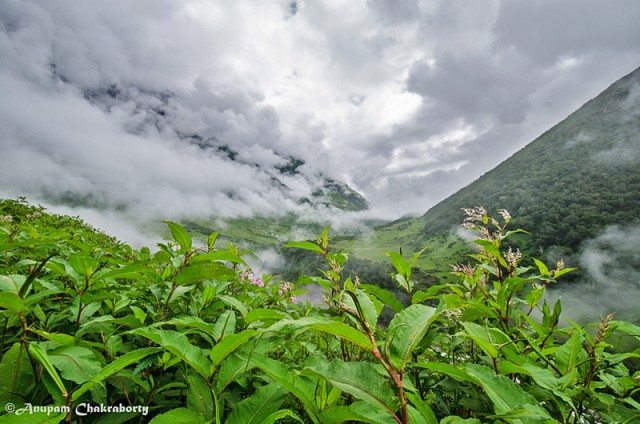 I looked at far and this is what I could see!

I covered myself with a poncho and headed to explore the place which is marked with the grave stone of Botanist Joan Margeret Legge. British Botanist Joan Margeret Legge, inspired by the work of Mountaineer Frank Smythe, came to this valley for further study in 1939. But as ill luck would have it, while collecting samples of flowers in the valley, she slipped and fell to her death.  Her sister came to the valley and erected a memorial for Legge which stands even today. 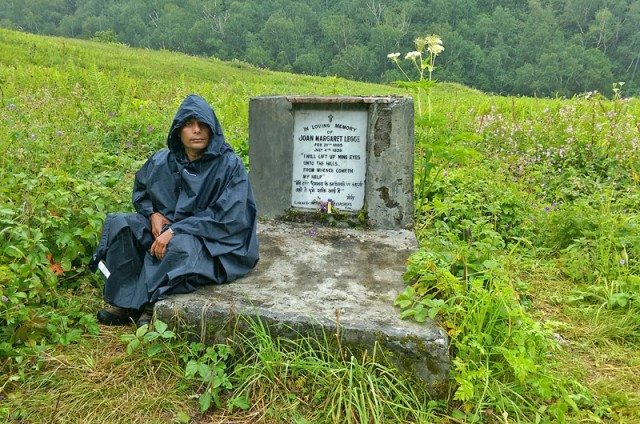 Nearing the grave stone, I carefully crossed a stream of gushing water. Now, winds accompanied the rain to play and dance with those tiny flowers. I stood amidst the tall flowering plants for a while, looking at the scene presented by the colourful flowers intermingling with each other by the winds. I stood for a while and then a little more, wondering all the time gazing at them; such was the joy of being there and trekking in the God’s hidden valley, the Valley of Flower. 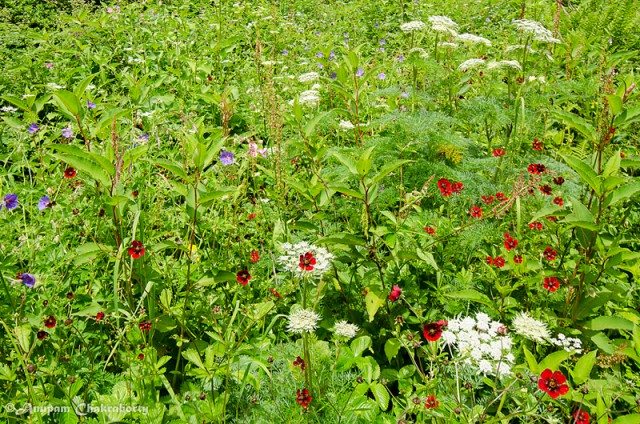 Colourful tiny flowers in the valley 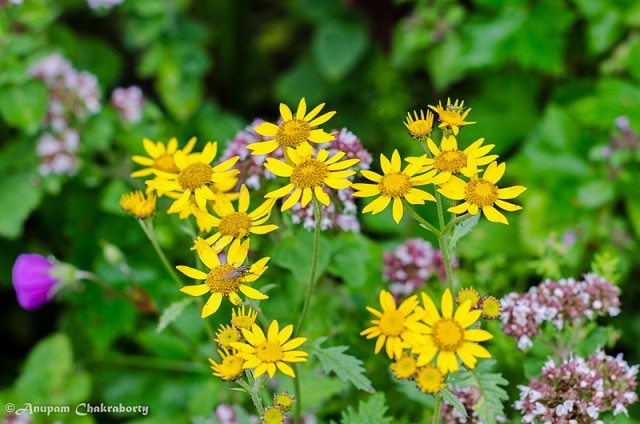 Botanical name of these flowers is Senecio Laetus 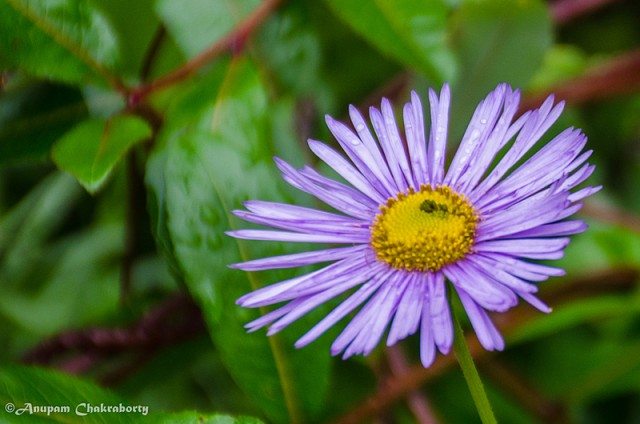 This dark purple flower has its botanical name “Erigeron Multiradiatus” 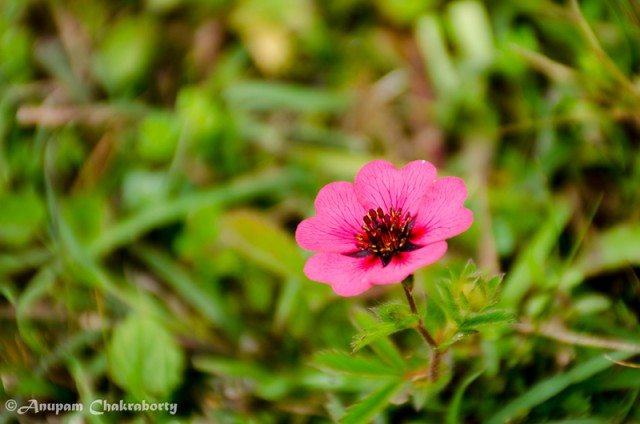 Returning from the grave stone, I joined my friend under the giant rock to finish the packed lunch we brought. Times flew in the dazzling valley of flowers. It was time to return, for we had to reach the base camp before the dusk as camping is not allowed in the valley.

We made our return, often looking back to capture the mesmerizing sight of valley for the last time. We knew, there are miles to go before we sleep and returning here may not happen again. 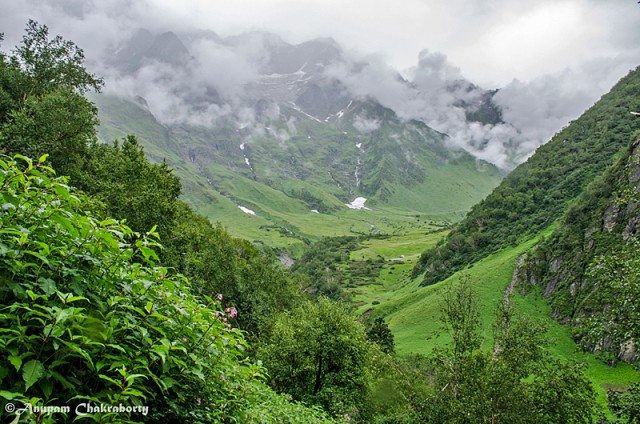 Looked back once more at the pristine valley

I have spotted many flowers in the valley all of which I can’t post here in a single post. They deserve a separate photo post which I have made in my blog Go And Wander and you can see them here. 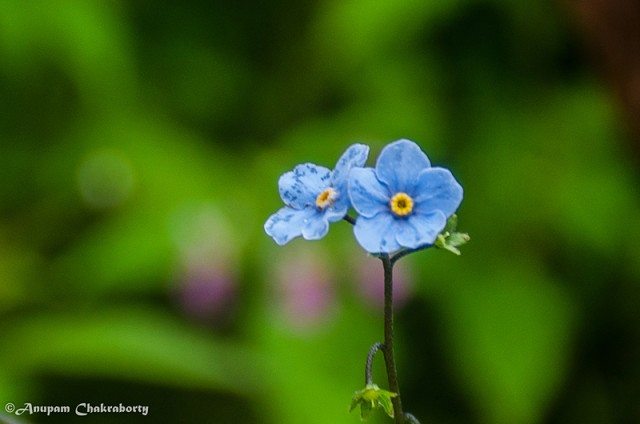 They call this tiny flower as Forget me Not! (Botanical name of this is  Eritrichium)

In our expedition to the Valley of Flowers, we were accompanied by the guide Dinesh Bhatt, an experienced trekker, mountaineer, Ski Coach and a guide for trekking in Uttarakhand who did expedition to Mt Kamet with Indian Air Force and also with a Gun Factory of West Bengal. Dinesh Bhatt may be contacted at 94115-55330/78951-65705. 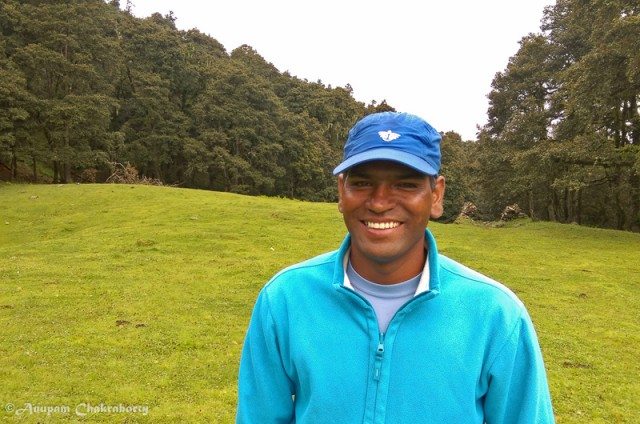 Valley of Flowers | The Wonderland was last modified: March 11th, 2022 by Anupam Chakraborty

This one sentence accurately defines the trekking experience 19 of us had in our recent trip to Kedarkantha. Kedarkantha peak at 12500 ft. seem to be too remarkable, but as the name says shaped like Shiva’s Neck, (Kedar means Lord Shiva and Kantha means Neck), actually one of the most scenic trek and offers great views to the Himalayan ranges, reason behind making it to one of the Top 10 treks in India by Conde Nast