Summer days are here again – with bagful of fantastical to-do’s in the oncoming vacations. I suppose we, who are on the wrong end/side of thirties and already quite distant from the teens’ generation, have more reasons to be nostalgic about such vacations……..Remember those ‘Great Indian Railways Voyages’ in scorching summers to the nanihal/ dadihal ? The joy of getting away from rut of schools; and mind you, back then, our vacations used to be AFTER the academic session (unlike today’s age of enlightenment; when vacations commence after START OF THE NEW SESSION). So we were lucky to be free of academic accoutrements of the next class.
Not that my daughter gets very fondly engaged with her books during the vacations – still, she is at least forced to lug them along in a perfunctory manner, and of course, the threat of ‘stop monkeying around and sit down now with your books’ always looms.
This summer, once again allurement of the Great Himalayas became too tempting; especially with Delhi heat starting to gnaw at body and soul. Gangotri being on our agenda for some time, it was Uttarkashi and Gangotri, – pilgrims’ revered trail, this time. 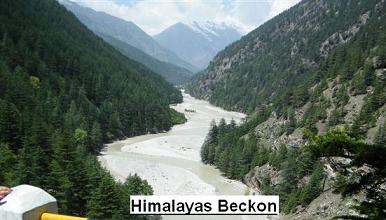 Route plan for the 07 days trip during first week of May was;

Starting leisurely at 9.30 AM on a Sunday, we reached Haridwar by 3.30 pm. Exit route from Delhi, till you get on to Meerut Highway in Ghaziabad, is a bit confusing and despite having done the route a number of times, I managed to loose the way in Trans-Yamuna/Ghaziabad area once again. Such occasions inevitably cause a number of losses, viz, loss of time, loss of petrol, and substantial loss of Sharmi’s temper. After getting on to NH 58, it’s a smooth sail till Haridwar. Remember not to miss Meerut Bypass (well marked). There was sizeable amount of traffic till at least Meerut. Road conditions are quite good throughout, though single lane roads start from a point somewhere between Khatauli and Muzaffarnagar. There are many options of the route, which have been discussed in the previous posts. 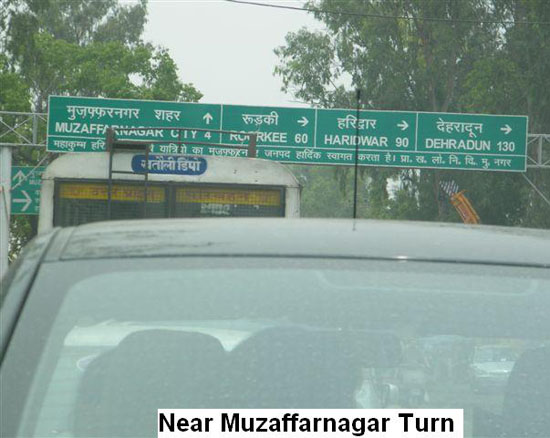 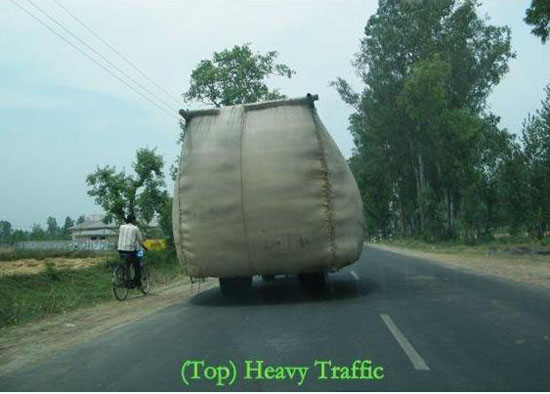 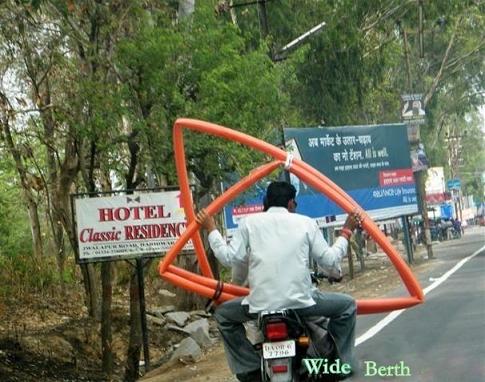 The route has enough petrol pumps and food joints – from the unending series of our very own dhabas to big names viz. Nathu, Bikanerwala, Jain etc, throughout the stretch.

Haridwar/Rishikesh offers a variety of stay options, including a wide selection of Ashrams/Dharmshalas (which are no less than well-appointed hotels, with options like AC rooms, family suits etc). 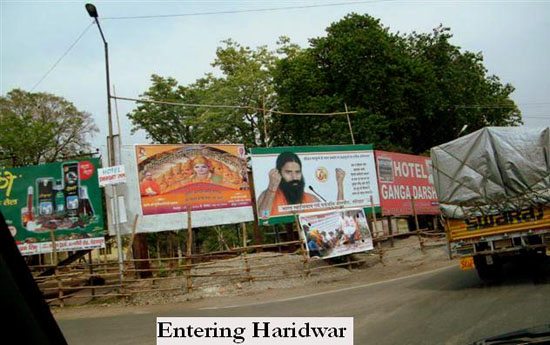 We had scheduled our night halt at Rishikesh only because Debosh wanted to take dips in the cold Ganges water at the earliest possible opportunity. That, I must say, is an important must-do. A dip in Haridwar Ganga in peak of summers – and you instantly acknowledge the magical powers of Gangajal. I avoid dwelling on Haridwar/Rishikesh here, because (i) enough posts exist in Ghumakkar (ii) I would like to devote an independent article on the place subsequently. 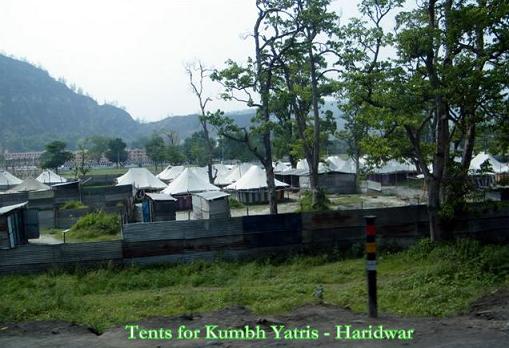 Logically, the first night halt should have been at least at Chamba (60 kms beyond Rishikesh) or further down (metaphorically; geographically, up). But, then we would have missed out on our holy family dip in Haridwar.

Alternatively, Delhi to Uttarkashi in one day….. is possible but avoidable, especially self driven. Anyhow, to accomplish that you need to get out of Delhi early in the morning, not later than 5 am, if not 4 am.

Another point I must mention is that the entire route is TOLL FREE (though I think I saw at least one toll booth which was under construction). 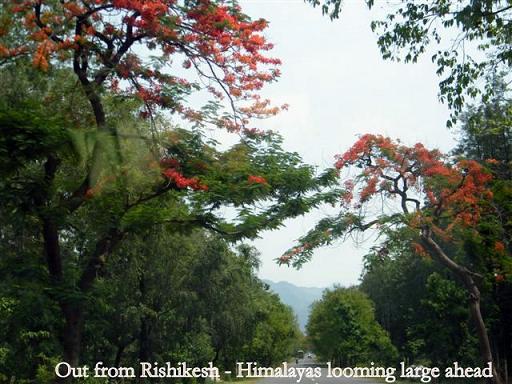 At 10.45 am, we were passing through the exit points of Rishikesh. Rishikesh marks the end of plains. In other words, Ganga, after her tumultuous journey through the Himalayas, makes first contact with the plains at Rishikesh. Rishikesh also acts as traditional gateway to ‘Char Dham’ namely Gangotri, Yamunotri, Kedarnath and Badrinath, as also other pilgrimage circuits viz Panch-Prayag, Panch-Kedar etc.

The road from Rishikesh to Uttarkashi is excellent (contrary to reports I had), perhaps due to recently concluded Kumbh Mela. It is reasonably wide, very smooth and scenic. Narendra Nagar is the first town, 15 kms beyond Rishikesh. There is a well-marked bypass to avoid Narendra Nagar, but I feel that it does not offer much advantage over the road through Narendra Nagar (in terms of time/distance etc), so one can try both the ways during up and down journeys. This is followed by Chamba (7050 ft/2148 Mtr ASL), situated 45 kms beyond Narendra Nagar (different from Chamba of HP, which one comes across on the way to Sach Pass from Dalhousie). Be careful to ask for directions in Chamba, because one divergent road leads to Mussourie/Dehradun and after a while another one takes you towards Tehri (both unmarked). If desired, a detour can be made to the famed picturesque Tehri dam, about 10 kms from Chamba.

Thereafter, another vital town is Dharasu, about 115 kms from Rishikesh. This is an important junction because the route to Yamunotri (100 kms away from Dharasu) bifurcates from here.
Thanks to a flat tyre and its subsequent repair, we reached Dharasu by 4 pm. One gets the first view of Bhagirathi about 10 kms before Dharasu – and what a grand view! After this point, she keeps you company all the way till Gangotri. 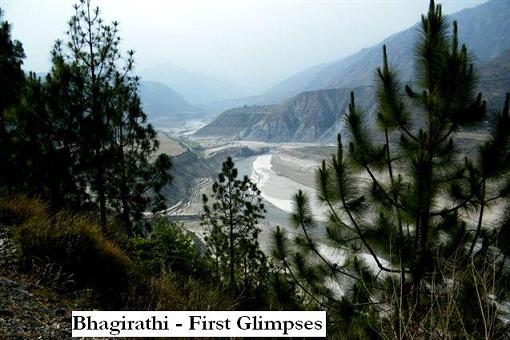 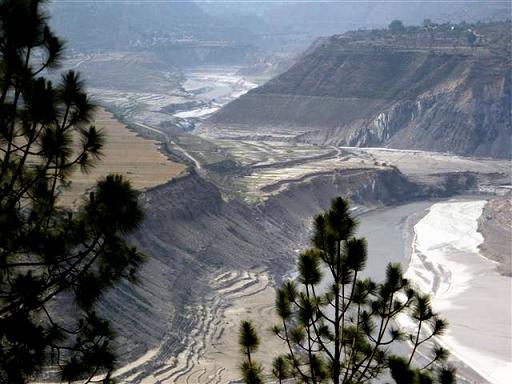 We were approaching Uttarkashi by 5.30 pm. Entrance to Uttarkashi proper is marked by a tunnel (like Shimla), difference being that there is also a road running parallel to the tunnel from outside. Both are equally and inter-changeably usable i.e. One-Way rule does not apply. 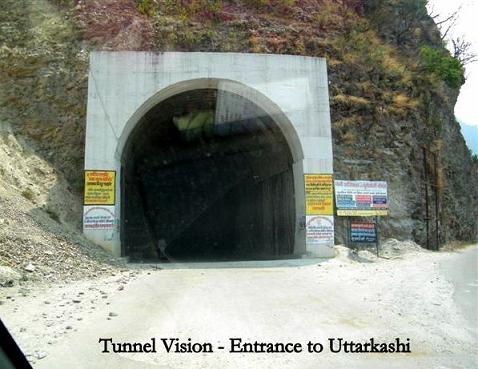 The entire stretch of road from Rishikesh to Uttarkashi (barring a patch of around 3 kms near Dunda) is excellent (I mean real smooth and tarred) and immensely drivable. 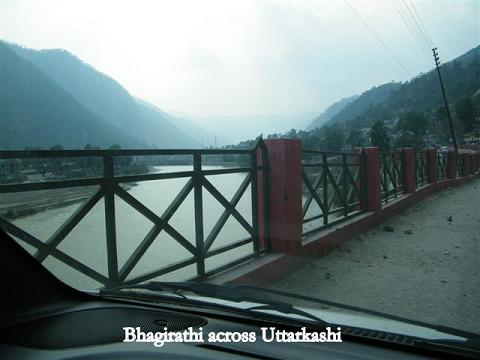 Nestled along the wide, looping Bhagirathi, Uttarkashi lies at a lower altitude than the surrounding ranges, which makes it comparatively warmer. It is also the headquarters of Uttarkashi district, which contains two dham, viz Gangotri and Yamunotri. This has been the traditional stop-over for pilgrims proceeding to Gangotri. It is considered at par with Kashi in terms of religious sanctity (thus the name, Uttar – Kashi). Uttarkashi has its own Vishwanath temple with a swayam-bhu shivling. Mahantji at the temple described that Uttarkashi was ordained to be the real Kashi of Kal-yug and the logic is bolstered by the fact that though Uttarkashi is not among the 12 (dwadash) jyotirlings, it replicates Kashi jyotirling, since the rampaging forces of Aurangzeb had desecrated the Kashi jyotirling in 17th century. 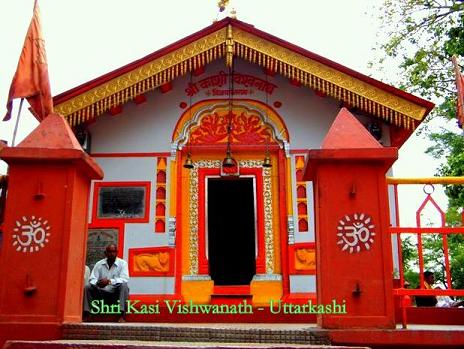 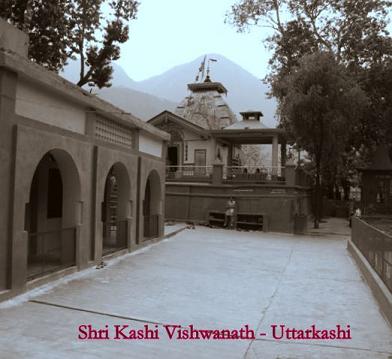 There are many other temples in Uttarkashi, viz, Shakti Mandir (opposite Vishwanath temple, on display is a massive, 26 ft trishul), Bhairo Mandir, Kedareshwar Mandir etc.

The main market and bus-stand are almost co-existent on the main road running along western side of Bhagirathi. The big market area offers enough options of hotels (though I was told that during the season, i.e. when Gangotri doors are open, it would be advisable to have a booking beforehand), shops and restaurants to meet basic needs of tourists. There are also numerous ashrams along the highway, which offer good stay option, in addition to providing access to bhagirathi ghtas and breathtaking views.

We had identified one such ghat about 5 kms beyond the bus stand (towards Gangotri), which had well paved stairs from the main road going down to the river. Having the entire area to ourselves, we had good, prolonged time frolicking in the chilly streams of Bhagirathi. 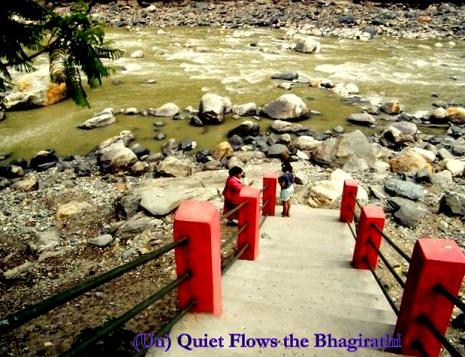 Excursions from the Uttarkashi include Dodi tal and Nachiketa tal etc, which are also good trekking options. One may also visit NIM (Nehru Institute of Mountaineering), situated at about 05 kms from Bus stand on other side of the river.

Note :-
1. Though there are at least three ATMs in Uttarkashi, my experience –don’t BANK on them – they will be either out of order or out of currencies. Stock up your wallet adequately in Rishikesh itself.
2. Uttarkashi has the last petrol pump on the way to Gangotri. So DO NOT FAIL to tank up here if proceeding ahead. 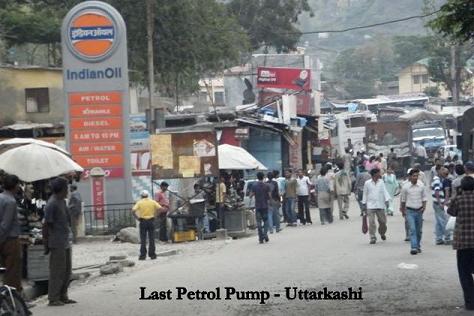 We stayed in the Guest House of NIM, thanks to a long lost friend’s friend, who is a mountaineer. The institute, established in 1965, is an important centre providing variety of courses on mountaineering. NIM is a place worth a visit, with its museum/ souvenir shop and the mountaineering set-up. 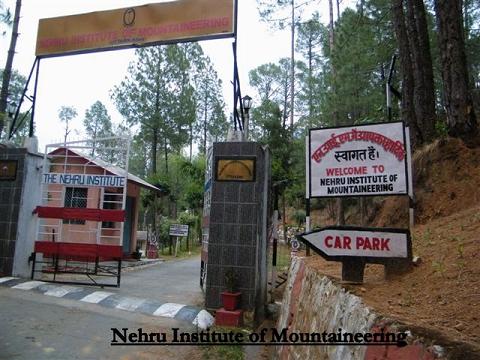 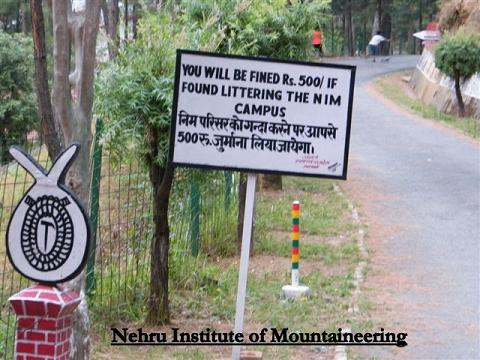 After spending two days in Uttarkashi, we moved on towards Gangotri. Will cover that phase in part II.
Thanks. Auro.