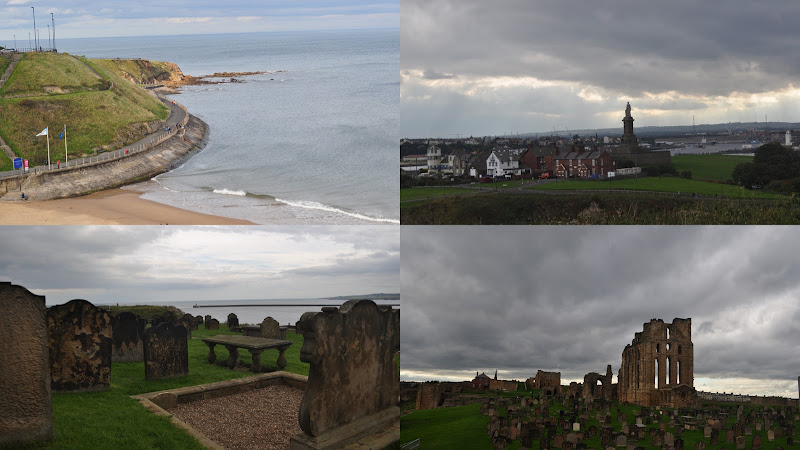 It was one of those days when you wake up with the eternal question- What to do?
It wasn’t even a week since I arrived in the Geordie land a.k.a. Newcastle Upon Tyne. Tyne is the river ‘upon’ which the city named Newcastle thrives. A couple of days before that day, I visited the Quayside, which, along with Tyne bridges, is the poster picture for Newcastle. Although, the place was up to the marks with its description on many a blogs and guides, but I found it a bit too crowded. And as I am more of a solitude seeker than a keen shopper, there were two options in front of me – First, to sit by the window in my room and watch the lonely seagulls flying from nowhere to nowhere; second, to google keywords like ‘Newcastle + Silence’, ‘Newcastle + Solitude’ or even ‘Newcastle + peaceful’. If I’d selected the former, then I wouldn’t have been writing this blog at all. After some googling I came across a place called Tynemouth castle. Yes, even I was surprised how everything over here was ‘Tyned’. The pictures looked nice, and the fact that this place lies by the sea, sealed the deal for me.

The month was September. And up here, 450 km north of London, September is almost equivalent to Indian December. Geordie people are known for their chill bearing capabilities (google Geordie Thermometer Joke). But far from the Geordieness, I wrapped myself in thick woollens and left the solitude of my apartment to search for the wilderness of the open. With an all-day metro pass I set off for Tynemouth. Just two or three stations before Tynemouth, I got the first glance of the sea from inside the metro itself, the great North sea, blue as sapphire. And when a person, who has spent most of his life in Delhi, which is 1100 km away from the nearest sea, gets a glance of the sea – He has every right to open his eyes wide.

The Metro station of the Tynemouth was bustling, it seemed as if some bazaar had been set up. And it was as it seemed. It was the ‘famous’ Tyneside weekend market. Used books, local paintings and some other ornamental goods were on sale. I don’t and I didn’t mind a book market at all. In fact I bought a used James Joyce novel, from an old woman, for just £1. I was happy to strike that deal until I walked out of the metro station (market held inside the metro station only) and saw that the price mentioned on the book was 75p. I didn’t go back to argue with the old woman and consoled myself for I have bought a tale for the 25p. A small tale of mine, in line with the infamous ‘chor bazaar’ tales of Delhi. 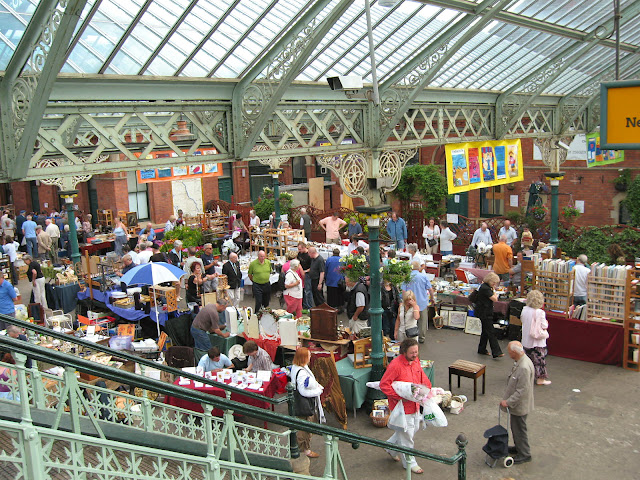 I strolled my way to the Tynemouth priory & castle. Facing the North Sea, I could see the rocky stairs going down to the beach (King Edward’s Bay) in front of me, a centuries old stone building on my right, a café on my back, and a road leading to horizon on the left. Chasing horizon was out of question, hence I decided to explore the other three sides, in no particular order. 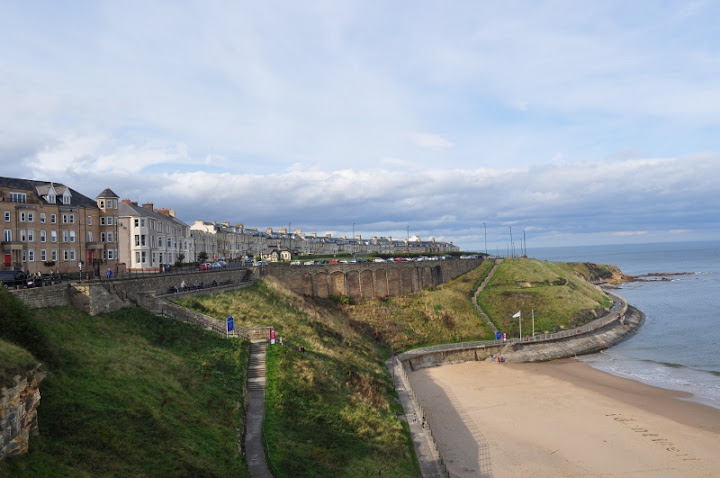 After picking up a take-away coffee, I descended down the rocky stairs to King Edward’s bay. I had seen beaches prior to that; but, as immensely clean, as sparsely engaged, as glitteringly magnificent, never. Upon putting my first foot on the beige coloured sand, I literally counted the number of people on the beach- 2 men, 3 women, and a dog. Fair enough; couldn’t ask god for a private beach altogether. In fact, those five humans were too busy, with their barbecue machine, to attract or dispense attention. Result: I had a much imagined solitary walk which turned out to be even better than I supposed it to be. The sun shone out of the clouds, for five minutes or more, at least three times during my stroll. The sunlight, mingled with the sea wind, made for an excellent recipe of leisure. I didn’t regret the fact that I was no swimmer, for the water was cold enough to frighten even Ian Thorpe. The vastness of oceans and mountains, I think, act as the real mirror for human kind, they reflect on us our actual size. I incessantly gazed at the horizon, for more than a minute, trying to experience the feeling of standing at the coast, looking at the horizon, and anticipating that ‘my country lies somewhere there!’, but in vain, as my acute interest in Geography shouted at highest of its pitch- ‘It’s Denmark over there’. 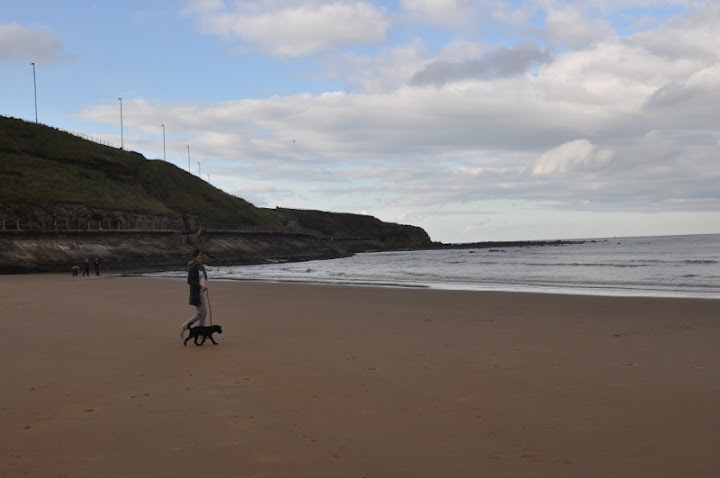 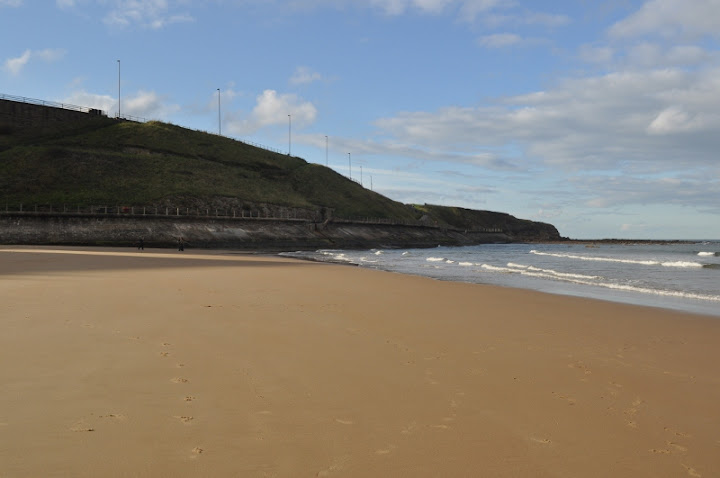 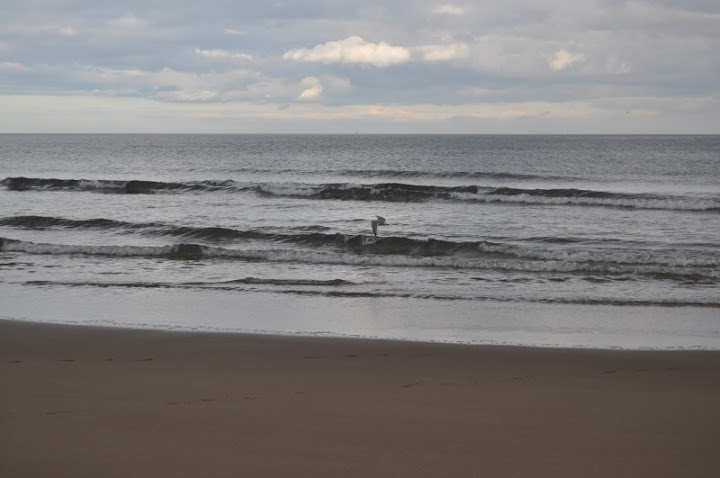 After finishing up with the bay, I ascended the rocky stair case, with some sand in my shoes, and turned towards the Tynemouth Priory and Castle. The entrance was marked with small uplands and lowlands covered with bright green foliage. As I faced the entrance, on to the left was a ramp, to sit and gaze at the Edward’s bay while feeding bread pieces to the seagulls, on the right side was the town establishment with a giant statue ‘Collingwood’s Monument’ standing proudly for last 166 years. As I entered the main gate, which happened to be without any door, I came across a parallel gate which was duly blocked. I noticed a small door on the right, which opened into the Museum shop. I entered in and saw another door on the far end of the shop. I could see that there was something marvellous hidden on the other side of the half-glass door. I wondered whether I needed to ask/pay anyone to cross that door. I, trying to be at my casual best, walked to the door and tried to open it.
“Mister, you need to buy a ticket to go there.’ shouted the receptionist bitterly.
“Oh! Al-right.”
I bought the ticket, which costed £4.50, wondering how did she expect a stranger to know about the ticket without any signage. Later, I found out that sign post was well placed outside the door of the shop, from where I entered, and that I clicked it as well. We all come across those dumb moments in our lives, or at least I do. 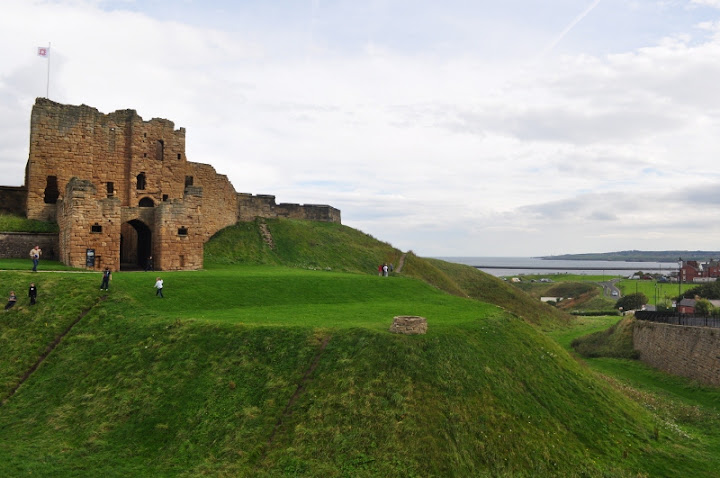 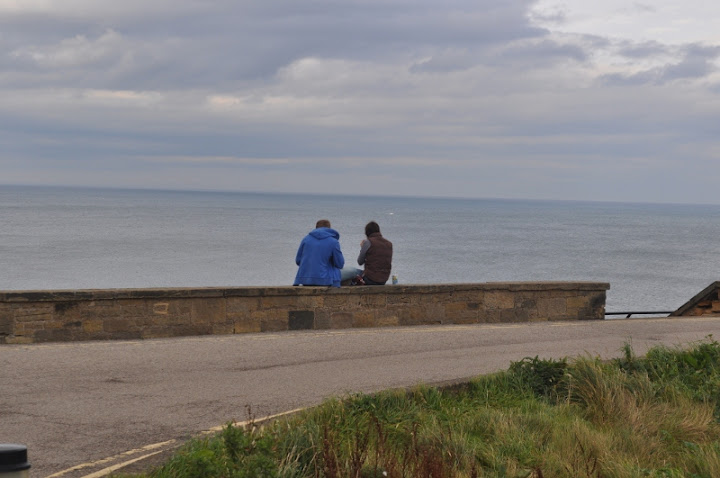 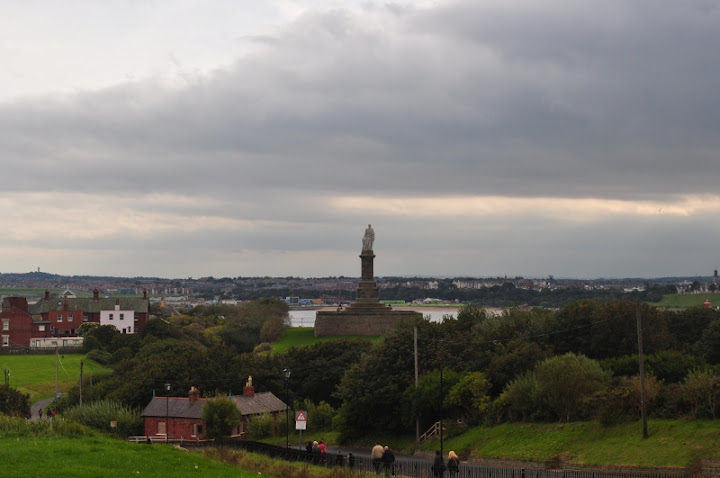 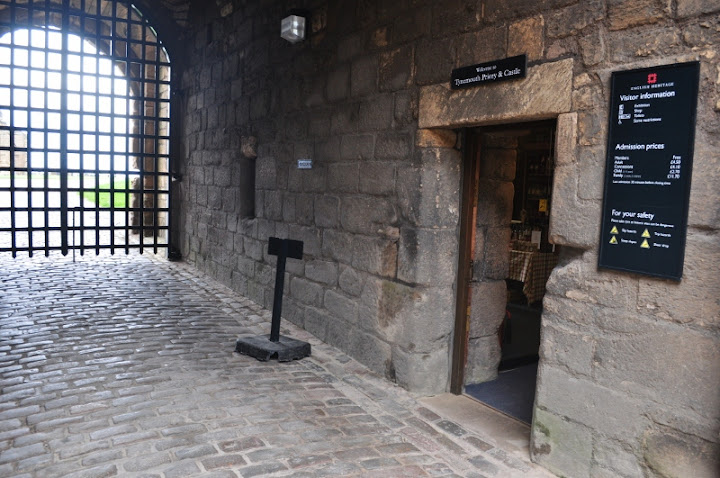 The door, which opened for £4.50, I suppose, belonged to Alice in Wonderland. For it opened into a kind of place, to which I had never laid my vision before. A green landscape with a building, of the likes in children’s sci-fi movies, in the centre, surrounded by innumerable graves. And above all, not even a single soul except mine and of the ones resting beneath the graves. God is really kind. I got to know that the building in the centre was the priory which means ‘Residence of a prior (the religious head of a sect)’. The, now defunct, priory was written to be fourteen centuries old. And there were no less than three kings buried in its vicinity: King Oswin, King Osred and King Malcolm 3. The fact that the Kings were resting among many unknown souls was bold enough to sum up the mortal truths of us humans. I collectively paid my reverence to the graves (the Indian way, by bowing the head) and moved further towards the sea. The remains of castle were also evident all around. As I reached the brink, I could, once again, see the horizon (with Denmark somewhere beyond it). But this time, I could also see a light house (or so it looked) standing at some distance from the land and joined to it by a long pavement. I came to know that the whole arrangement is called a ‘pier’. I didn’t know that word. I can say with some confidence, that if you are searching for some nice wallpapers for you pc/mac, an image search for the word ‘pier’ won’t disappoint you. I could see the people crawling down the pavement towards the light house. But I didn’t want to walk down the pier. For it looked so beautiful from a distance. Moon might not be such a lovely panorama from near. 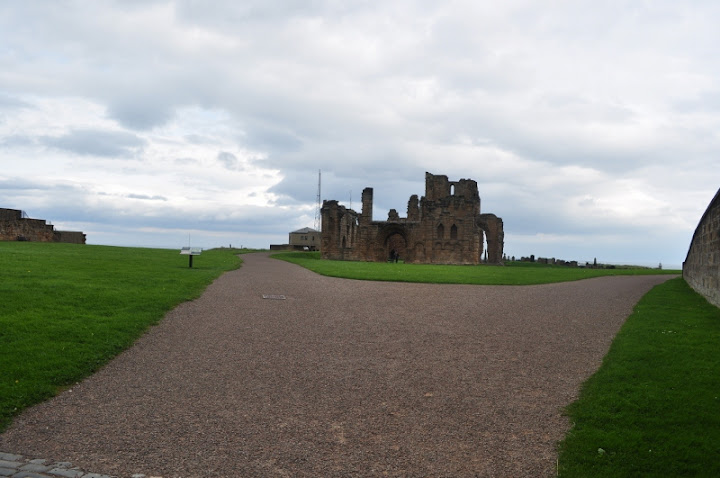 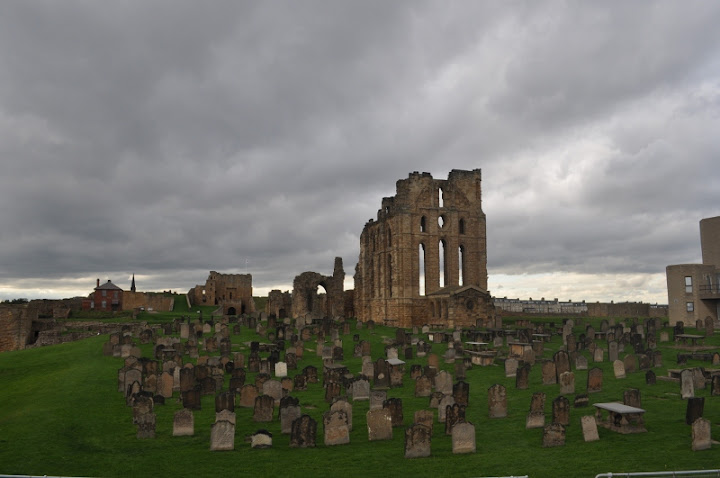 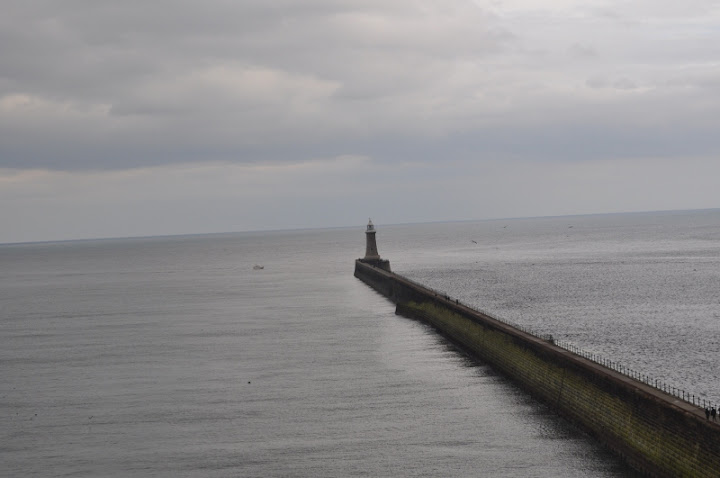 I, finally, took a U-turn, making sure that the base of the U be as wide as possible. The views on the way back were as glorious as they were when I came in. As I was approaching the Museum shop’s door, or rather the ‘Alice in Wonderland’ door, I saw three wooden tables with attached benches onto my left side. I decided to stop over for a few more minutes. The tables had a clear view of the pier. There was nothing one can do but admire. I scribbled some words on my diary. 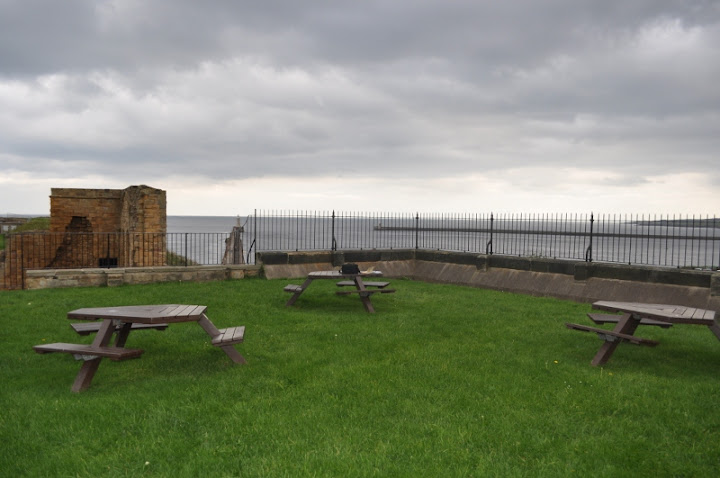 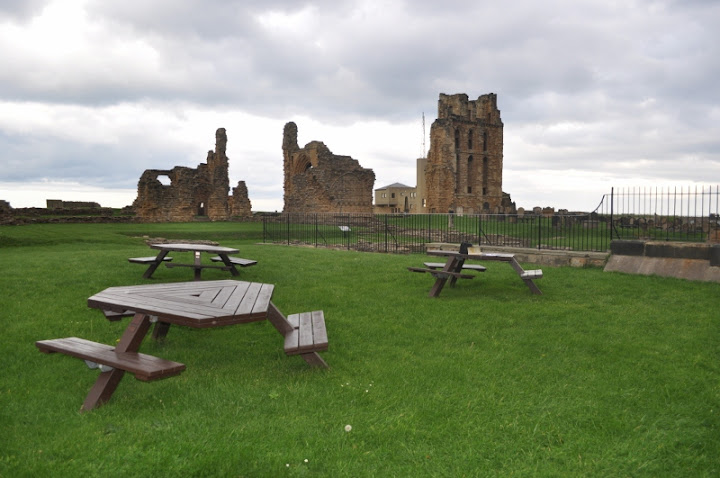 And imbibing the whole ambience, I got up and turned towards the door, only to find out that a couple just entered the premises. My time of solitude was over and their started. Universe does conspire. 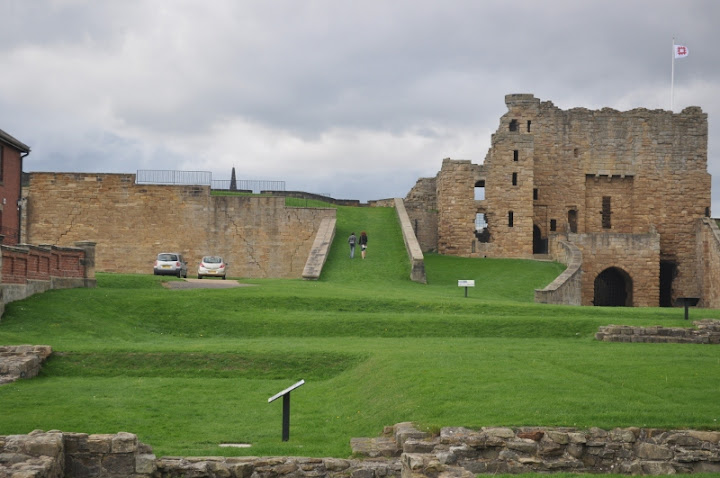 Our next stop was Sonamarg, around 83 KMs from Srinanagar. Sonmarg is situated in the Sindh valley at a height of 8950 feet. The snow clad mountains over the horizon that we got used to by now was like the clouds in the sky. Something that you could see but not touch!