This is Naman, back again & this time I’ll take you on a journey to Mysore. I along with my family toured Mysore in January’11. I had heard a lot about the city & was really excited to be discovered the charm of this city. Mysore is the second largest city in the state of Karnataka, India. It is the headquarters of the Mysore district and the Mysore division and lies about 146 km (91 mi) southwest of Bangalore, the capital of Karnataka. The name Mysore is an anglicised version of Mahishūru, which means the abode of Mahisha. Mahisha stands for Mahishasura, a demon from Hindu mythology. The city is spread across an area of 128.42 km2 (50 sq mi) and is situated at the base of the Chamundi Hills. Mysore is famous for the festivities that take place during the Dasara festival when the city receives a large number of tourists. Everyone must have seen the visuals of the beautifully decorated Mysore Palace during Dasara/Dussehra.

Dusshera’s not far away & so I decided to write a travelogue on this particular city. So, to begin with, I reached Mysore on 6th Jan’11,though we stayed in Bangalore (I’ll be covering Bengaluru in my coming stories). We took a Karnataka Tourism’s Bus & set off,the reason we chose bus over a taxi was because of the very knowledgeable Guides, which these tour operators provide.

Our first halt was at Mysore Palace.

The Palace of Mysore is a palace situated in the city of Mysore in southern India. It is the official residence of the Wodeyars – the erstwhile royal family of Mysore, and also houses two durbar halls (ceremonial meeting hall of the royal court).

Mysore is commonly described as the City of Palaces, however, the term “Mysore Palace” specifically refers to one within the old fort. The Wodeyar kings first built a palace in Mysore in the 14th century, it was demolished and constructed multiple times. The current palace construction was commissioned in 1897, and it was completed in 1912 and expanded later around 1940.

Mysore palace is now one of the most famous tourist attractions in India after Taj Mahal with more than 2.7 million visitors. Although tourists are allowed to visit the palace, they are not allowed to take photographs inside the palace. Price of admission for foreign tourists is 200 INR, and for Indians 20 INR. All visitors must remove their footwear to enter the palace.

This Palace is worth visiting and trust me guys its has the most beautiful interiors. One needs to literally examine this palace carefully. It needed many hours to be discovered completely. This palace had three unique rooms mainly:

Temple in the palace complex

Out of these Ambavilasa was the one which appealed to me the most.The palace complex also includes twelve Hindu temples. The oldest of these was built in the 14th century, while the most recent was built in 1953.

Bronze leopard at the gate

View of Temple & the Entrance Gate

Another View of the Palace

After the Palace,we proceeded to Chamundi Hills. Its average elevation is 1,000 meters. According to legend, the demon Mahishasura, king of the area that is currently Mysore, was killed by the Goddess Chamundeswari (also Chamundi) after a fierce battle. The hills are named after the goddess and a temple honors her in the hills. The temple has a beautiful idol of the goddess. The temple has always been patronised by the rulers of Mysore. In earlier days, the Maharajas of Mysore would ride the ceremonial Dasara elephant during the annual Dasara festival; since the seventies, the idol of Goddess Chamundi is taken on an elephant. There are two ancient temples on the hill, the Mahabaleshvara and the Chamundeshvari. It is a place of pilgrimage.There are about 1000 stone steps, from the bottom to the top of the hill, caused to be cut by Dodda Devaraja Wodeyar in 1664. He also installed the colossal monolithic statue of Nandi, which is beside the steps leading to the Hill. It is about 16 feet high and 25 feet in length.

We then moved on to St. Philomena’s Church.St. Philomena’s church is a church built in the honour of St. Philomena in the Diocese of Mysore, India. It was constructed in 1936 using a Neo-Gothic style and its architecture was inspired by the Cologne Cathedral in Germany. I was really surprised to see this kind of architecture for the first time.The Church was good but not excellent.

It was already 6:00PM. We had some Brunch in one of the Cafe’s of the City and then proceeded for the last spot i.e Brindawan Gardens. The work on this garden was started in 1927. It was constructed in a terraced fashion and named Krishnarajendra Terrace Garden. The main architect for the park was G.H. Krumbigal, then Superintendent of Parks and Gardens of the Mysore Government.

It was shocking to know that the garden is visited by close to 2 million tourists per year.I was highly disappointed because the battery of my Camera was drained, though I was able to capture some memories of Garden. 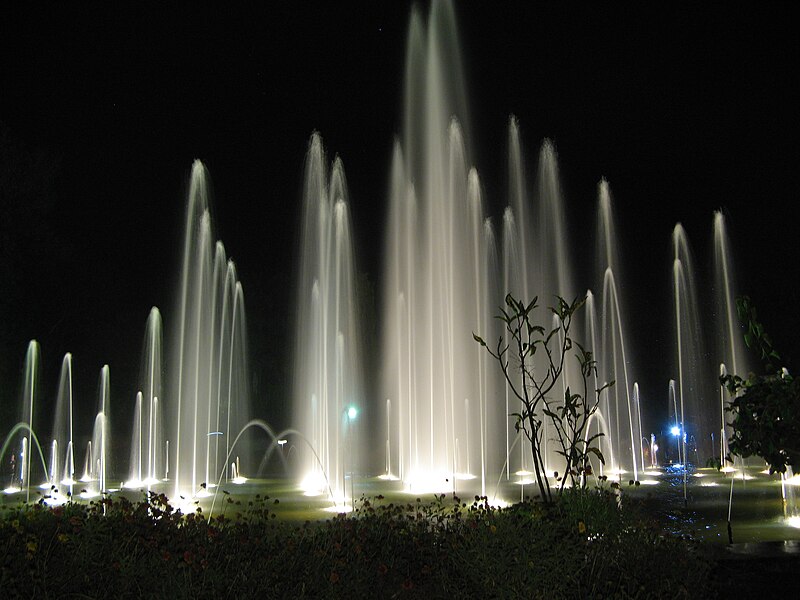 After Spending 2 hours in the garden, we needed to rush back to our Bus. It was the End of a beautiful journey and we were back to Bangalore by 12:00 in the night. All of us were really tired & had no energy left.We then proceeded to our hotel.

All in all, it was a memorable journey. That is the reason which makes me write “Exotic” before Mysore. One must come here and take away long-lasting memories. It’s a Bye for now & finally, here’s Wishing you all a very happy Dusshera.

…Travellers love rains and we weren’t very happy that we missed the rains. But a cloud burst is a different thing, and the kind of tent Nandan sends us with wouldn’t survive such winds…Drive after Chamoli is beautiful, the river flows right next to the road, and the expanse gave me an eerie deja-vu, Alaknanda felt like Tons around Tiuni-. It rained a little here…