Day 4 of the trip was the final day of the trip. We had a train back from Bhopal to New Delhi on the evening of the 4th day, and there was no plan to visit anything more in Pachmarhi. We had planned to return back to Bhopal right after breakfast, and on the way, visit two places on the way back. These were 2 places that we had always wanted to visit, and these were called Bhimbetka and Bhojpur. In addition, we had wanted to do a trip to Bhopal Lake and also see Bharat Bhavan in Bhopal.
In the morning, after another good breakfast at the Misty Meadows Resort, we took our time before finally winding up. Once we had paid our bill and confirmed that the return taxi would cover the trip to both these places, and also cover Bharat Bhavan and the lake, and would take up back to the railway station, we set off.
It was a fairly long journey (seemed to be longer than the journey we had while coming from Bhopal to Pachmarhi), and since Bhimbetka is pretty close to Bhopal (45 kms away), it took a couple of hours to reach Bhimbetka.
So what is Bhimbetka ? Bhimbetka is essentially a series of rock shelters where pre-historic man lived, one of the earliest traces found of man’s presence in India. How was this found ? Well, there are a series of rock paintings over here, and these paintings are fairly well-preserved. They are also a reason why the place is so famous, and Bhimbetka is also marked as a UNESCO World Heritage site.

Approach to Bhimbetka is off the main highway (there are markings on the highway indicating the turnoff), and you need to cross a railway line on this route. As you head towards Bhimbetka, the local land settings change (it becomes progressively more rocky and barren (sem-arid) rather than the lush green farmland on the main highway).

Approach terrain to the rock carvings site at Bhimbetka

You also need to pay an entry charge way before that depends on the number of people in the vehicle. The road is well maintained, but is only a 2 lane road.
Once we reached Bhimbetka, it was fairly crowded, and initially we were surprised at the number of school buses and trips, but soon realized that this is a great educational experience for children who are interested in history and India’s heritage. 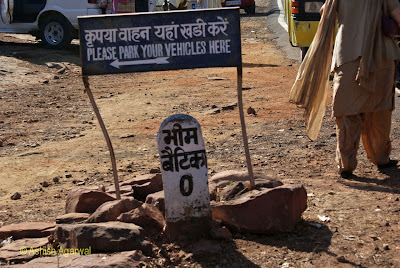 Rock carvings of cattle and smaller animals at Bhimbetka

Rock paintings of humans as stick figures in Bhimbetka

Inside the rock shelters, we tagged onto a group that was getting a guide to run them through the various rock paintings, and got to hear a fair amount. The rock paintings were made over the years, through the thousands of years when man was living at this site. We also saw a cave where they must have lived, which had natural holes at 2 ends for ventilation, and was big enough to accomodate a large number of people. 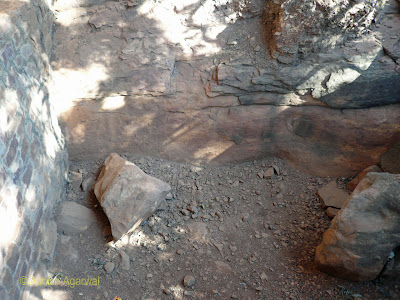 The spot in Bhimbetka where a pre-historic skeleton was excavated 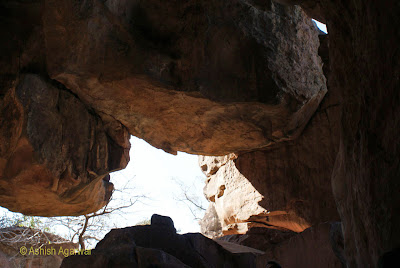 We were shown a large number of rock paintings, depicting either the people over there, or the animals they would have come in contact with; we were also shown natural rocks shaped into different forms by the action of winds, water and sea (the place was under a sea a long time back). It was hard to go from the place, but we had a schedule to keep.
After Bhimbetka, we were next targetting the sun temple at Bhojpur, around 25 kms away from Bhopal, and also off the main highway. The path to Bhojpur from this highway is not exactly the smoothest, but eventually we reached. Bhojpur has an unfinished sun temple (called the Bhojeshwar temple) which has the largest Shiv Lingams in India. This looks like a ruin, but the temple is functioning with people coming to pray and make offererings to Lord Shiva. The temple is a short slightly upward sloping walk from the main gate, and is located on a small height where you can see the neighboring area for quite some distance. 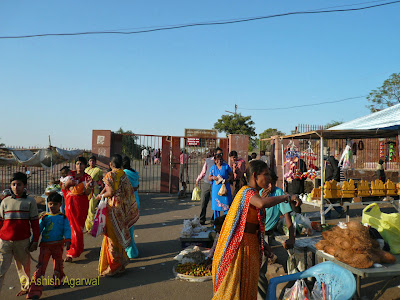 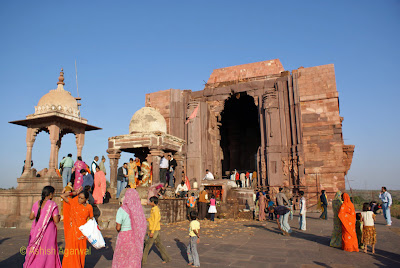 Ladies at the temple compound in Bhojpur in Madhya Pradesh

Offering prayers at the Lord Shiva site in Bhojpur

As you reach the temple complex, you can see a small shrine where offerings are made to some priests sitting there, with a statue of Nandi also over there. Once the offerings are made, you can climb the short steps to the huge Shivalingam inside the main temple. The temple is small, and very beautiful inside (you can admire the architecture, the high roof with carvings on the pillars, the height of the platform on which the Shiva Lingam is placed). We spent some time inside the temple, did an internal round of the Shiva Lingam and were then ready to leave. 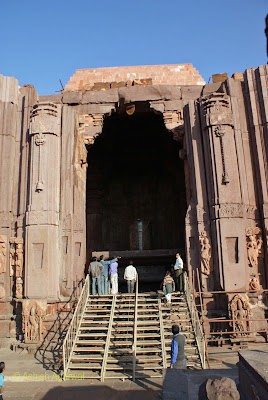 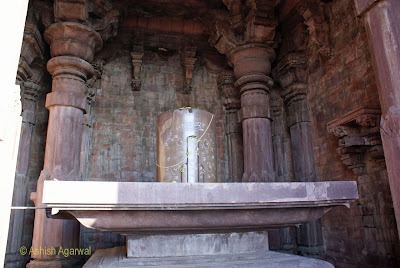 A view of the giant Shiva Lingam at the Bhojpur Temple 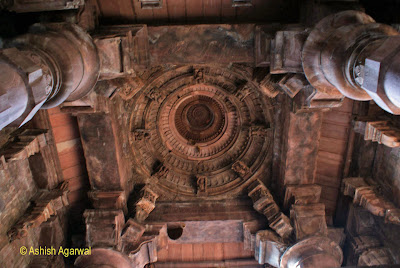 Roof framed between the pillars of the Siva Temple at Bhojpura

By this time, we were running pretty late and decided against trying to do some boating in the Bhopal Lake (it was late, and darkness had set in). We reached the Bharat Bhavan complex, spent time inside, including admiring the architecture, the paintings, the photographs, and then when it was getting close to the time for the train, we left. And that was the end of our journey.

Trip back to Bhopal from Pachmarhi (Day4) – Bhimbetka and Bhojpur was last modified: September 26th, 2019 by Ashish