It’s a crowded jeep-ride down to Sanchi from Raisen. The jeep hurls along at a terrific speed, except that it halts as suddenly to pick up yet more villagers with their baskets full of vegetables or utensils. It’s a typical Indian rural shared jeep-ride, except that here the road is decently good and green fields stretch across on either side. 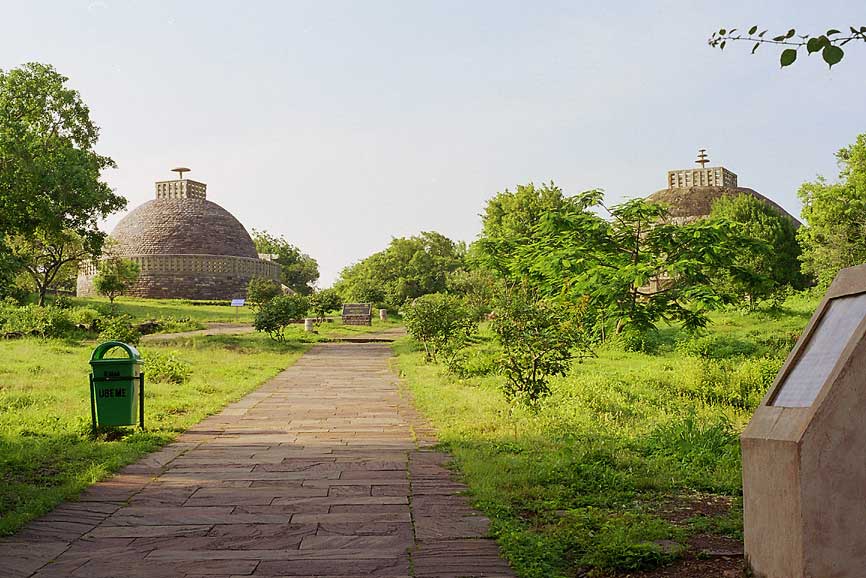 Once in Sanchi, only very limited accomodation is on offer. A total of two or three private lodges (Jaiswal lodge – 2 rooms, New Jaiswal lodge – 4 rooms: you get the picture), apart from the government tourist hotel. This is because most tourists visit just the stupa and go away. A pity. They prefer to base themselves in crowded, hot Bhopal; whereas Sanchi offers a pleasant, quiet, meditative ambience to spend a few nights in.

Sanchi, not the Stupa

People are generally nice. They smile, they go out of their way to help without being too intrusive, they say welcome to a thank you. The owner of the dhaba where I took to eating took me to the railway reservation counter at Vidisha. He also dropped another traveller there when he had to catch his train. The owner of the cyber café where I took to checking mail gave me his bicycle for free to take to the Udaigiri caves. Little gestures that mean so much when you are alone, out on the road, and hungry for any sort of human warmth, touch or contact. The smallness of the place makes it personal, un-anonymous, human.

All right, the Stupa

Being in the precincts of the Stupa feels like being high above the world, untouched by it. In this peace, one almost comes to understand the meaning of being in the world, but not of it.

As there are two ways of going through the whole Sanchi experience (the use-and-throw model, i.e. come and go away; or the stay and live-it model), there are two ways of approach to the Stupa. Either you motor up by the road, or you approach it with feet reverentially struggling up towards it. The climb up is really nice. Many Buddhist (and generally religious) places seem to be located at a height, at least where possible, and not coincidentally.

Before entering the stupa complex, one might sit awhile in the peaceful modern temple just outside it, called the Namo Buddha Vihara. Within the complex itself, the huge stupa confonts the eye. The eye tries to skirt around it. It tries to take in the smaller pieces first or look at the greenery. It cannot bear the large roundedness of the huge hemisphere that is the stupa. The spirit rambles through the ruins.

Eventually one circles the stupa, clock-wise, as is the custom. One looks at the art, tries not to be overwhelmed by it. Scenes from the Buddha’s life. It makes one feel what the best of art makes one feel: either you understand me fully, immediately, or you try to grasp me in bits and pieces, analytically, with your mind. One is a slave to one’s time: one puts one’s mind to work. There are boards explaining the sculptures on the toranas, but only in Hindi. I run from the explanation to the torana, trying to find correspondences. This dance continues for a while because there is too much explantion, too much to understand, too much to grasp. I gasp. And simply stand back to admire what I see.

I return the next day and watch a beautiful sunset, sitting on a bench facing away from the stupa. The stupa is not a jealous lover; it says, you may turn your back to me if it is beauty that you are imbibing. I imbibe by the gulpfuls.

Time is slow here. Hold it in your hands and feel it.

This piece dates back several years. I visited Sanchi in 2004.
© Vipul Rikhi

Timeless in Sanchi was last modified: February 4th, 2021 by vipul

Vipul Rikhi has worked as scriptwriter, editor, teacher, and translator, among other things. In 2010-11, he was fellow for literature at the Akademie Schloss Solitude in Germany. Vipul is currently based in Bangalore. His novel, 2012 Nights, is due out in October this year from Fingerprint Press.

If you decide to meet your destiny, God will help to achieve this, I had gone through this face, my childhood dream was to drive on hills on a grand Royal Enfield machine, my dream comes true on 20th June 2018 when we five friends me Mohammad Saleem Haider, Rakesh Kumar Singh, Praveen Kumar Aswal all three riders of their Royal Enfield Classic 350, with pillion on Rakesh and Praveen’s bike is Vijay Sharma and Mohit Srivastava,