While driving along the airport highway,  a massive, magnificent, multi-domed edifice springs up, seemingly out of nowhere from the stark desert environs . We are on  the outskirts of  Abu Dhabi, the capital of the United Arab Emirates and gazing in wondrous disbelief at what is arguably the most beautiful building this side of the Arabian Sea, the Sheikh Zayed bin Sultan Al Nahayyan Grand Mosque. It is purportedly the third largest mosque in the world, after the great mosques at Makkah and Madina.

The Emaratis, as the citizens of the Emirates are called, love superlatives. They are keen that everything they build is the largest, the biggest, the highest and so on. And it helps to have one of the highest per capita incomes in the world.

The main entrance lobby. The arches are of Moorish origin

For starters, have a look at these mind-boggling figures:
• The mosque can accommodate more than 40,000 worshippers
• The 180,000 square foot courtyard provides praying space for 22,000 people.
• The main dome is 33 metres in diameter and 85 metres high – the largest mosque dome in the world
• The floor of the main prayer hall is covered by a 47 ton carpet, the largest of its kind
• Suspended from the main dome is the world’s largest chandelier
• The Mosque has approximately 1,000 columns in its outer areas which are clad with more than 20,000 marble panels inlaid with semi-precious stones. 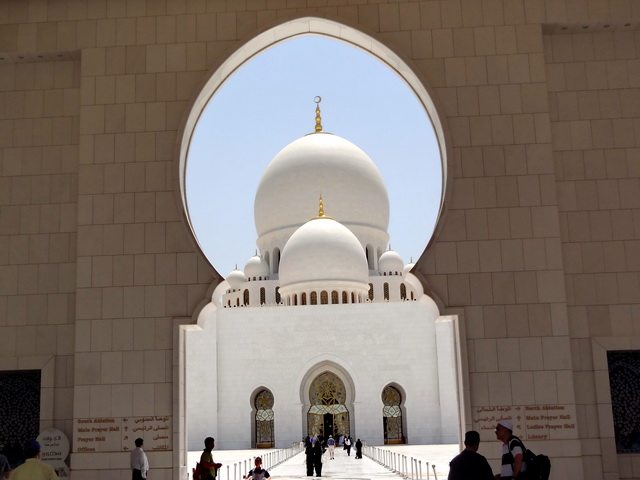 The main dome as viewed from the main entrance

As a rule, non-Muslims are not permitted to enter the precincts of a mosque, but, the Sheikh Zayed Grand Mosque is a glorious exception to the rule. The late Sheikh Zayed, the visionary founding father of the UAE after whom the mosque is named, wanted to showcase the true spirit of Islam to the world at large when he ordered the construction of this mosque.

Admission is open to all and entrance is free of charge; there are no restrictions on photography except at the tomb of Shaikh Zayed. All that is required is that people dress and behave in a decent manner and do not touch articles such as the Holy Quran. Guided tours are conducted daily at fixed timings. For more information, please visit the official website. 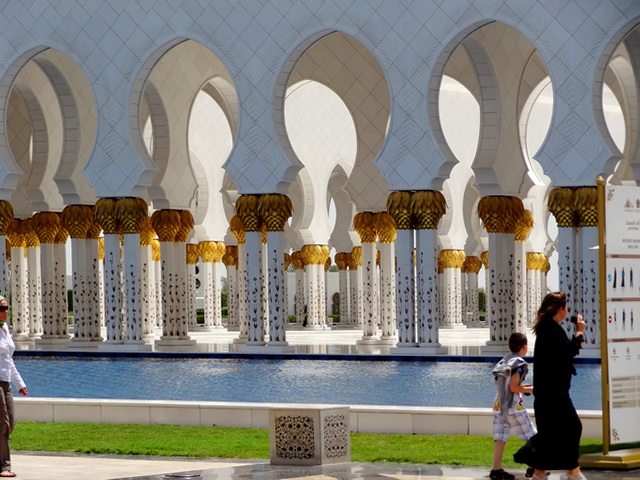 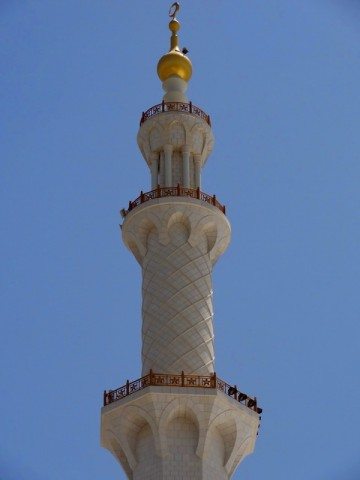 Built at a staggering cost of Dirhams 2.5 billion (approximately Rs.4,500 crores at the current exchange rate), the architecture is a fusion of various Islamic schools like Mughal, Arab, Turkish and Moroccan. Architects and artisans were drawn from all over the world. Construction began in 1996 and it was inaugurated on the occasion of Eid Al Adha in 2007. Unfortunately, Sheikh Zayed did not live to see this day as he passed away in 2004. However, in accordance with his wishes, he was buried in a simple grave in a quiet corner of the campus. It is an open air crypt fenced in by latticed screens. As a mark of respect, photography is not allowed at his tomb.

The mosque is surrounded by colonnaded walkways which are characterised by a profusion of Moorish arches supported on marble clad hexagonal columns topped by gilded fronds. The columns are embellished by floral designs embedded into the marble cladding by a technique developed in the Mughal period known as “parchin kari” and is reminiscent of the inlay work seen in the Taj Mahal. Semi-precious gemstones like lapis lazuli, red agate, amethyst, abalone shell and mother of pearl were used for the inlay work.

Shallow rectangular pools of water have been constructed along all the periphery which, in addition to providing a cool ambience to the environs, enhance the visual splendour of the mosque with shimmering reflections. Though the ambient temperature was about 48 degrees Celsius, the moment we entered the walkway, it felt like stepping into an airconditioned chamber. 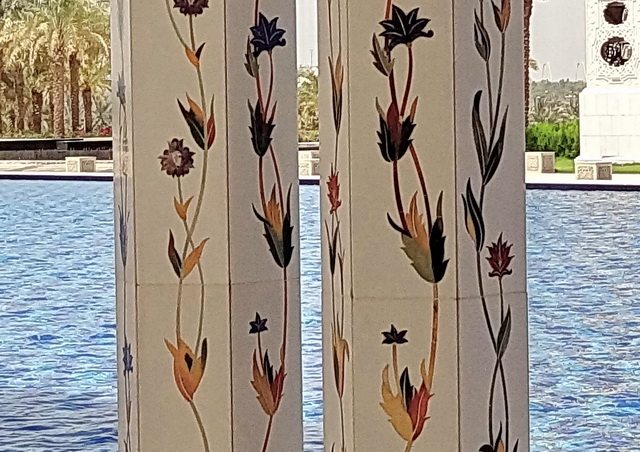 A close-up of the parchin kari or inlay work on the columns, remniscent of the Taj Mahal 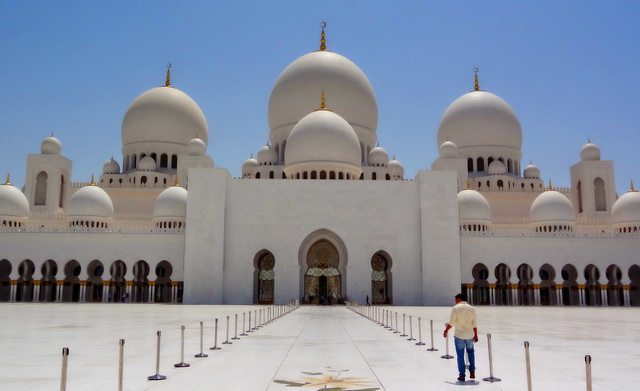 The open courtyard is called the Sahan. It has an area of 1,80,000 sft, making it the largest of its kind

In addition to columns and arches, there are also 82 domes, which look distinctly Moghul, of varying sizes. The domes are clad in snow white Sivec marble from Macedonia. On the inside, they are covered with fibreglass. The ceilings too are  ornamented with exquisite floral designs. 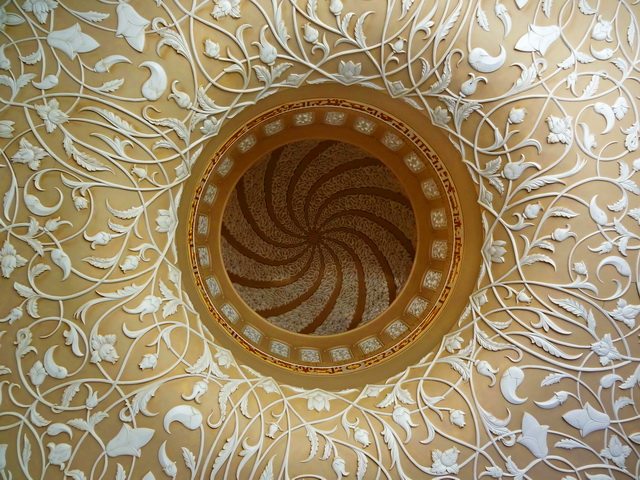 A close up of the inside of a smaller dome. The ceiling is covered by exquisite floral designs in bas relief.

Prior to entering the mosque proper, we are handed out plastic bags into which we place our footwear. We carry them along with us during the tour. The entrance lobby is dazzling. The walls and floor are a dazzling white and are festooned with colourful inlay work. While it looks as if the designers have gone overboard, the end result is, surprisingly, aesthetically pleasing. 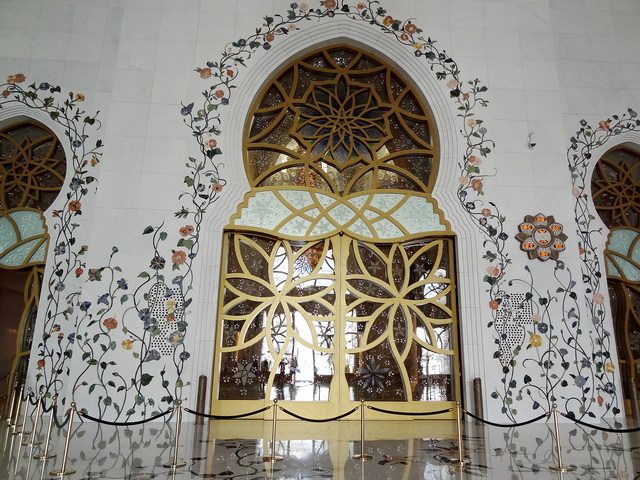 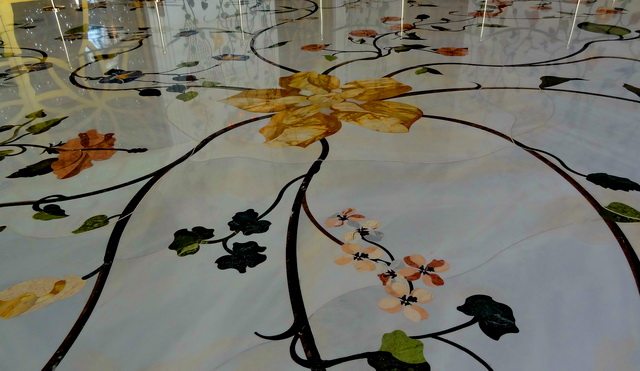 The main prayer hall can accommodate more than 7,000 worshippers. The Qibla wall, which all worshippers face, is 23 metres high and 50 metres wide, and is beautifully backlit using optic fibre technology. 99 attributes of Allah are inscribed on this wall in Kufic calligraphy. The 24 carat gold plated niche in the centre is the Mehrab, which indicates the direction of the Holy City of Makkah, which is the focal point of all prayers. On the right of the Mehrab is the Minbar, a raised wooden pulpit from where sermons are delivered by the presiding Imam. 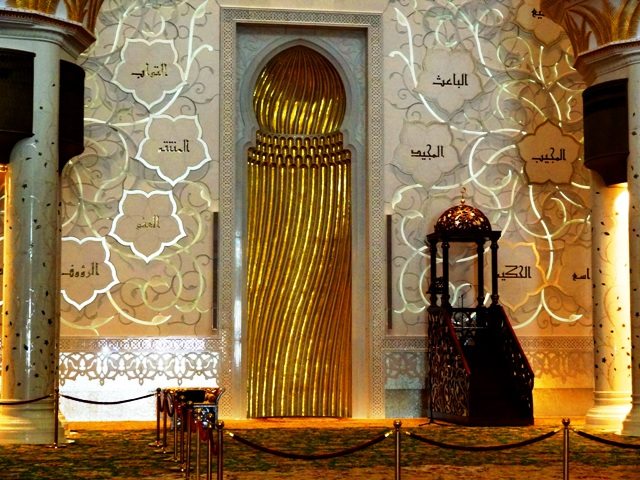 The Qibla wall. The niche in the centre is called the Mehrab, The Minbar is to the right.

Above this prayer hall is the massive main dome from which is suspended a magnificent 9 ton chandelier, the largest in the world. It is 10 metres wide and 15 metres high. 24 carat gold and thousands of Swarovski crystals have gone into the making of this 8 million dollar objet d’art. 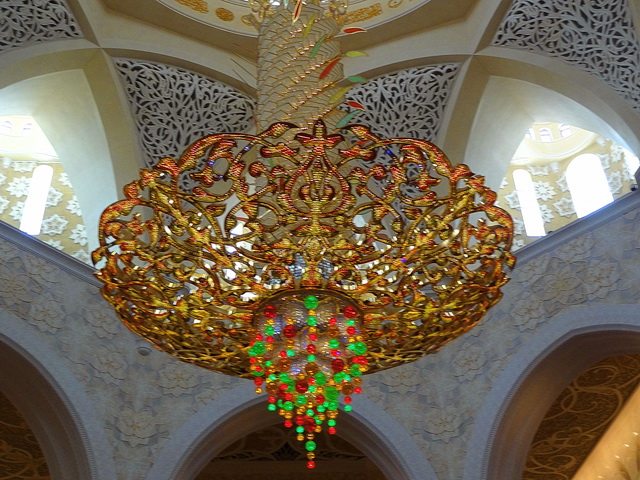 The world’s largest chandelier hovers above the main prayer hall 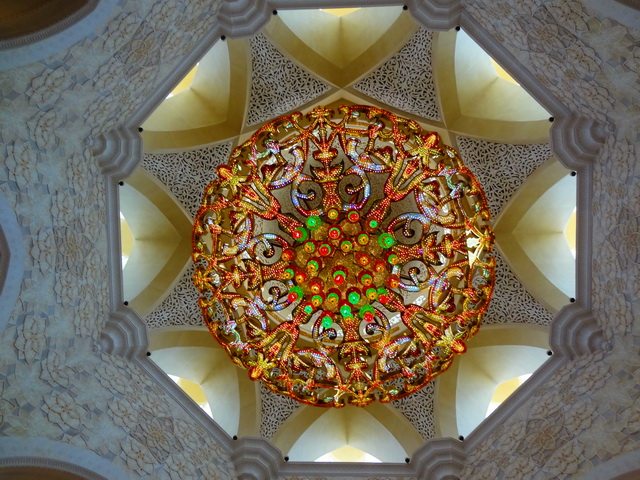 A view of the magnificent chandelier from below

There are a total of seven chandeliers and below is another chandelier, smaller, but no less beautiful. It is located in the entrance lobby. 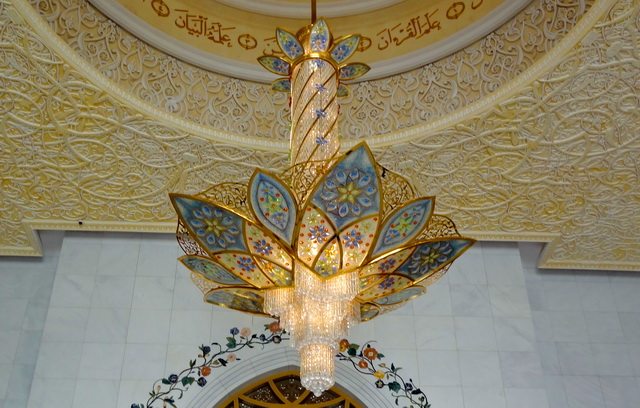 A smaller chandelier in the entrance lobby. Even the ceilings sport exquisite patterns.

The floor is covered by the world’s largest carpet. It is trapezoid shaped and covers an area of about 60,000 sft and weighs a whopping 47 tons. Made in Iran with the finest grades of wool, silk and cotton, it took 1,200 artisans 20 months to complete it.

A close=up of the world’s largest carpet

There are several niches in the walls which are embellished with handpainted Iznik ceramic panels, which are very popular in Turkey. Only floral designs are used as depiction of images of humans and animals is strictly forbidden in Islam.

At night, the mosque is beautifully illuminated by a sophisticated lighting system based on the lunar cycle. On full moon nights, it is bathed in white and wispy white clouds drift across it. As the moon wanes, the colour subtly shifts to blue and it is at its bluest on the 14th night. Unfortunately, I could not stay till dark as I had a flight to catch.

A last glimpse of the splendid edifice

The memory of its sublime, and at times overwhelming, beauty lingers on in the mind long after I left it. It felt like I had travelled back in time to the 17th century, when the Taj Mahal was still new and yet to be ravaged by man and time.