The paddy fields patchwork touched the horizon, bunch of coconut trees interrupting the flatness of the landscape, the entire yellow green expanse swathed in setting sun, the fresh puddles and lakes glistened in golden rays.
The bus is racing forward to take us to the place haunted by history. .

The land of warrior kings, grand palaces, even grander temples, the Sanskrit chants, the pauranik rituals, the forested ruins, beckoned us from thousands of miles to come and see the legacy of a culture.
We are now in Cambodia to see the Angkor temples and to relive the past, to revisit the forgotten legacy, to bond with a piece of greater India outside the boundaries of present India.

Once upon a time, thousands of years back, came a Brahmin called ‘Kaundinya’ to this place from India. There he married a local Nag princess and ruled the territory. The seed of Indian culture sowed on this ground turned into a tree laden with fruits and flowers. This is the anecdote which marks the beginning of Cambodia the original ‘Kambhuj Desh’. 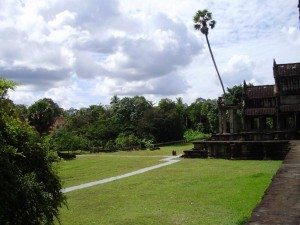 The Indian influence was so powerful that generations of kings across several dynasties called themselves with Sanskrit names such as Jayvarman, Yashowarman, Baladitya and their capital cities were Vyadhpura, Aninditpur, Shambhupura and so on. Indian literature including Ramayan and Mahabharat along with several pauranik stories became so popular, that they were written back in local Khmer languages and found place in several carvings, folk arts and importantly in peoples’ minds. The gods worshipped were Shiv, Vishnu, Uma, Durga, Ganesh and Gautam Buddha. If Indian mythology made Gautam Buddha as Vishnu’s tenth incarnation, it’s south east Asian variant made him brother of Shiva. Several large temples and schools were built for learning of Sanskrit and other faculties such as Nyaay, Mimansa, Kaavya. Several of the Cambodian kings were tutored in Indian education system.

Their social rituals such as coronation, marriages etc were entirely based on our customs as written in Smriti and Sutra literature. There are several inscriptions written in Sanksrit and that too as ‘VrittaBaddha kavya’ – verses in metres. There was constant interaction with India, as scholars and merchants travelled between the two lands. Present day Cambodia was the first Indian settlement dated around first century AD. Funan, Chen-la and then Angkor were the prominent Khmer empires giving ‘them and us’ both, a history to be proud of.
The success story of India Shining thus flourished around 2-3’rd century AD, came to an end around 14-15’th century. The Buddhism took over more aggressively and the Chinese influence increased, shutting the doors to Indian winds. Same time India was shackled by Mughal empire which also acted towards neglect and dis-interest in keeping this south-east connection alive.

And now we were here as a part of a large group of history enthusiasts trying to capture the glimpse of our culture from the monuments, sculptures, carvings all scattered in front of us. 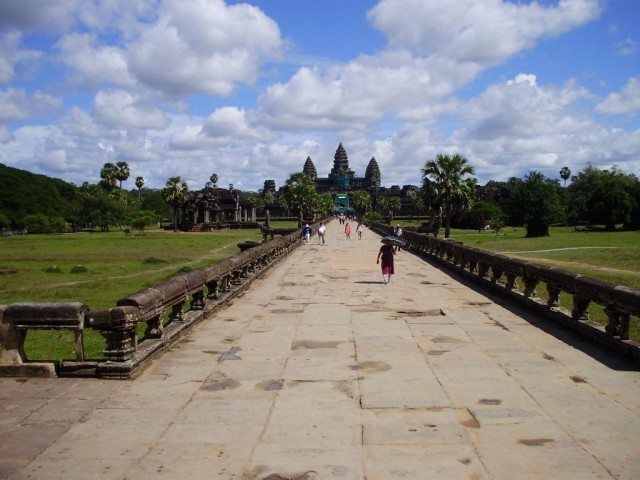 The first and the foremost destination was no doubt the much celebrated Angkor Wat. Vat itself means temple. And this is the biggest religious monument as well as the biggest Vishnu temple in this world. This temple was built by King Suryavarman II in 11’th century AD. 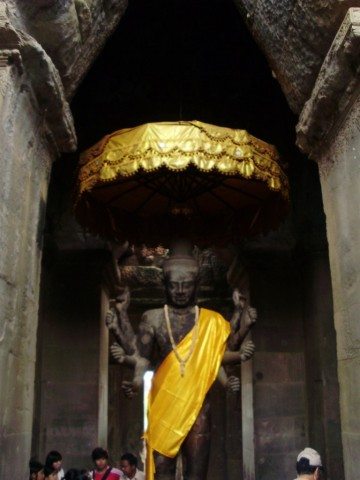 The Vishnu idol is no more in the main sanctum. There is an eight handed standing Vishnu idol residing in the ‘Gopur’ section, which could be the original one. According to myth, the original Vishnu idol was made of pure gold. Now nobody knows what happened to it, and as of now, the main sanctum is occupied by a Sleeping Buddha idol.
The square premise (1.5 km * 1.3 km) is surrounded by moat, as seen in most of the temple monuments of Angkor area. The entire construction is done in sandstone. The heavy downpour, humidity and bright sun has given a black weathered look to the entire monument. As you pass through the bridge crossing the mote and enter through the ‘Gopur’ , the vast expanse of Angkor Vat enfolds in front of your eyes. Given to it’s sheer size, Angkor comes across as the most elaborate and grandest of the structures ever seen. 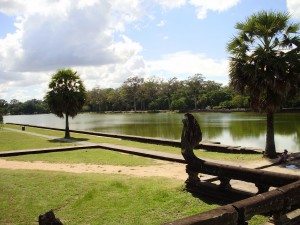 The Khmer concept of temple is different from Hindu concept. It is not a meeting place for the devotees but is primarily abode or palace of gods. The temple structure represents the mount Meru and the moat around it is the sea of milk (ksheer sagar) or the primordial ocean. The god sits atop the mount Meru, and concentric enclosures are the mountains surrounding the Meru Parvat.
The temple has 5 ‘shikhar’s built in Dravid style and only three are visible from all angles except some. You have to walk for half a kilometer to reach the main temple. Since it is a west facing temple, and our entrance is also from west, the structure can be viewed best in the evening when golden rays of sun give a magical touch to the black, drenched stone. The temple has a square plan, each side aligning to the cardinal directions.

The large open galleries on four sides are replete with wall carvings in low relief depicting the scenes from Hindu mythology and epics. Most impressive among them was the ‘Amrit Manthan’ scene carved with 92 demons and 88 gods, with Vishnu standing in the center of the ‘Vasuki’ rope. It was intriguing to watch all our gods including Yam, Kuber, Indra with their proper vehicles such as bull, elephant etc. carved to perfection with all their glory. Inside the ‘outside’ wall stood the main structure of Angkor Wat which is again square with 5 shikhars, the middle one being the highest. To get to the main sanctum one needs to climb up a good 35-40 steps. But then the fatigue and outside noise and blazing sun everything fades away as you feel the cool touch of age old stone, look at the serene and calm Buddha statue as if waiting for ages to give ‘darshan’ to you. Unknowingly you sit in the corner, marvel at the blue sky visible from one of the windows, your eyes trapped in the maze of the corridors, your mind surrendered, it is like coming home… 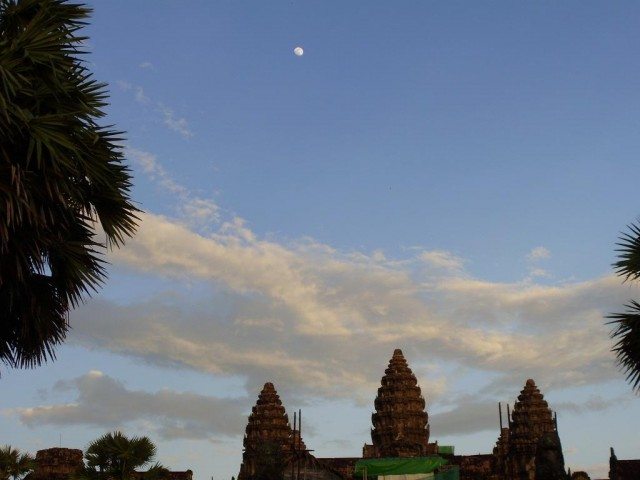 Out of Angkor Wat, dragging ourselves out in midday sun in all its glory and fury, the next stop gave a much needed respite to the eyes.
‘Srah Srang’ is a lake full of blue bright water, it’s horizon laced with green trees. This lake on one side is bound by steps similar to our ‘Ghats’. Also were present several sculptures of cobra with hood. 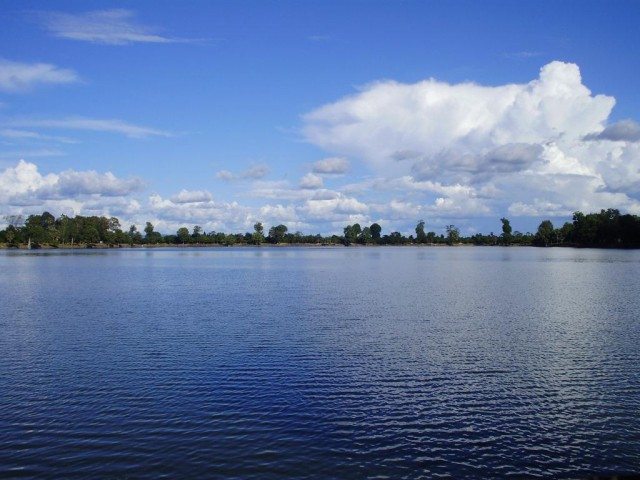 One can notice the abundance of these cobra images in all the temples of Angkor area. And this is not the normal single hooded cobra but the massive cobra king with five or sometimes seven hoods. The entry path of Angkotr Wat is also lined with the cobra heads. This must have originated from the myth that this land belonged to the ‘Nag’ people.

Our next stop was etched in public memory, not necessarily for it’s place in history but more accurately for it’s place in celluloid. The ‘Ta Prohm’ temple is where Lara Croft – The Tomb Raider was filmed and people seemed to be more excited about following into Ms. Jolies’s footsteps.
Never the less Ta Prohm by itself is nothing short of enticing and mysterious. This is really a battle of stone sculptures with nature on the backdrop of time. We walk for a distance through a jungle listening to shrill sound of secada. And next comes a structure, once erect and impressive and now crumbled and ruined ,a huge tree rising to the sky, thrusting its massive roots deep inside the steps, the walls, the ceiling. Ta Prohm is a jumble of building and temples and trees and shadows. A former center of Buddhist learning and mediation, now it is engulfed by aggressive tropical nature with its’ green fingers. 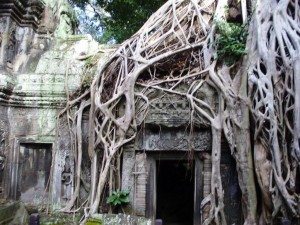 The walkway which takes you inside and around makes you stop at several places, to witness this fierce fight of domination. Very large fig trees have grown from the walls and the ground, their branches, trunks and roots encroaching the centuries old faces of apsaras, demons, gods. And somewhere from this jungle rise a bunch of citadels, proudly basking in the sunrays, their elaborate gateways now blocked by branches, give way to another corridor leading into another temple and just around the corner, the huge white trunk of the tree is brushing against the carved temple wall. The ground slippery with fresh rain, the stone slabs fallen down now covered in moss, the dense rainforest feel and lovely Apsara images set beautifully in the side window, it is easy to get charmed and lost here. 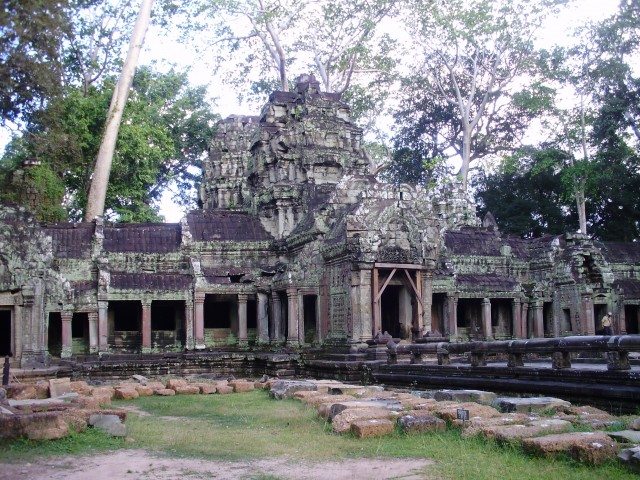