We started from Delhi 3 days back and after spending first night at Shimla, we moved to Kinnaur. In Kinnaur, we visited Chitkul Village and then returned to Kalpa for the night stay. Now, we take the journey further

Day 4: Kalpa, Khab (Entering the Spiti Valley), Nako, Tabo
Time to get up early in the morning to get a view of the awesome Himalayas from the balcony. It was so cloudy all around at 6AM, that hardly anything was visible. With a cup of tea, we started waiting for the fog and cloud to clear up. After that it was cloud moving around with occasional clearances of the mountains. Believe me, its one of the most awesome views as the clouds play around with the kailash range. And with the sun occasionally coming out in between the clouds with clear lights, another lovely worth seeing site. 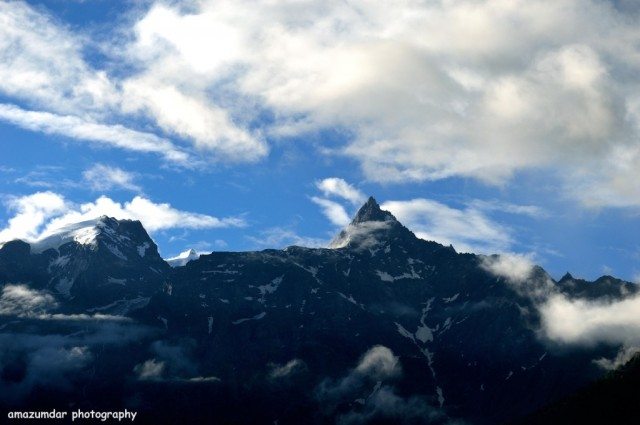 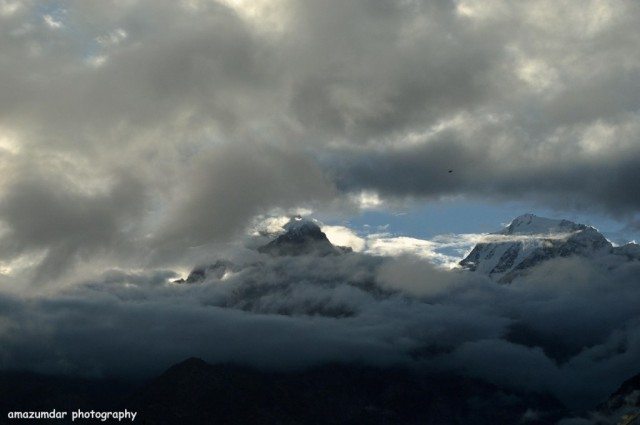 A bit of light through the clouds 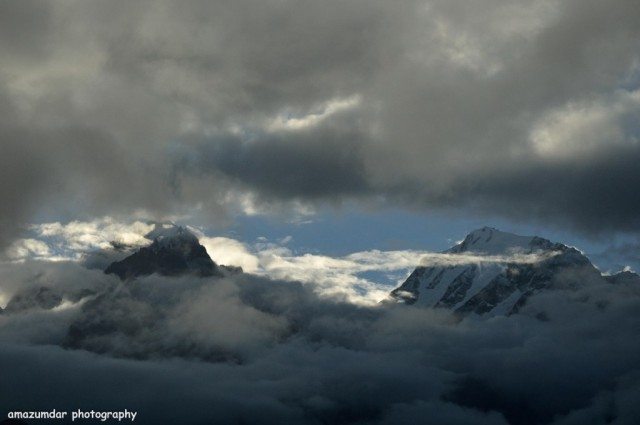 While we were able to see the Kinnaur kailash easily, we were not able to spot the shiv ling. The hotel staff said, because of the fog we might not be able to view it. It was hidden behind the clouds. But then suddenly, one of the hotel staff said, its visible now. As we saw, the 69 ft height shiv ling was clear visible from that distance not more than 1 inch. But a very beautiful view. 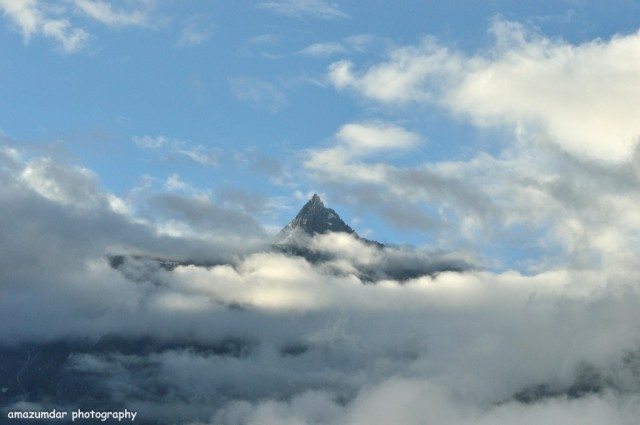 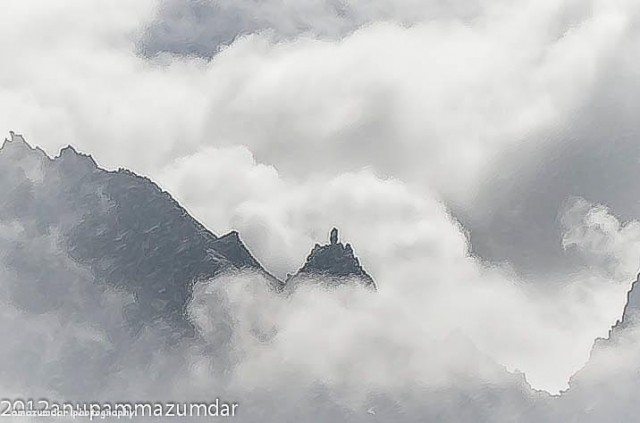 We had an initial confusion of whether it is the original shivling of Kailash. But then one of the guys cleared us that, this is the shiv ling in Kinnaur Kailash. The original Shiv ling is in Mansarovar Kailash which is in Tibet.

We ordered our breakfast, got fresh and after breakfast as the sun light become more strong, the view becomes even better.
After some nice breakfast and fantastic view of the area, we checked out of the hotel and started for our next destination. We will now be proceeding for Khab and we make our entry on Lahaul and Spiti Valley. Started around 10 AM in the morning.
We crossed Recong Peo by 10:30 AM and by 11:00AM we were in Powari, from where we had to take the route to Khab. From this point onwards, one can start noticing what Himachal actually is, and how Spiti along with Ladakh are two of the well known heaven in earth.

One does not find many people visiting Lahaul and Spiti because of the height and the extremely curved roads of Himachal. But mainly foreign tourists may be seen. The route till Khab is also prone to occasional Landslides and one might get stuck in few landslide clearances. We also got stuck in one such landslide clearance, but then enjoyed those moments on the side of the viciously flowing Sutlej river. 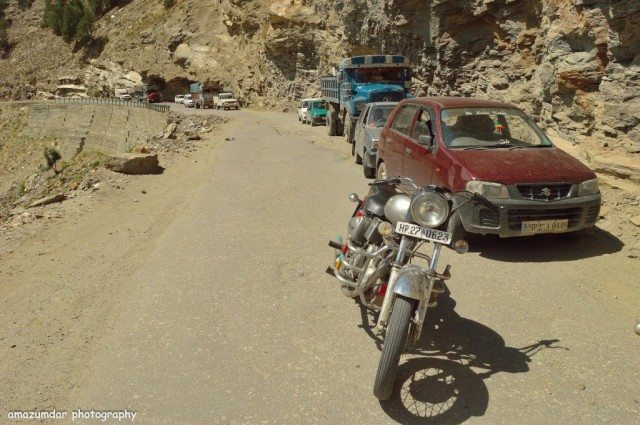 Another Landslide on the way to Khab

From now on its all dry brownish mountains, which are rarely seen in any other part of India. The variation of the scenic beauty as one moves out of Kinnaur District and enters into Lahaul Valley is really unimaginable. There are some beautiful villages Akpa, Pooh enroute to Khab. Light drizzles in between make the journey even better. One might also get to view some waterfalls in between on way to Khab or green patches in dry mountains showing the migration from Kinnaur to Spiti. 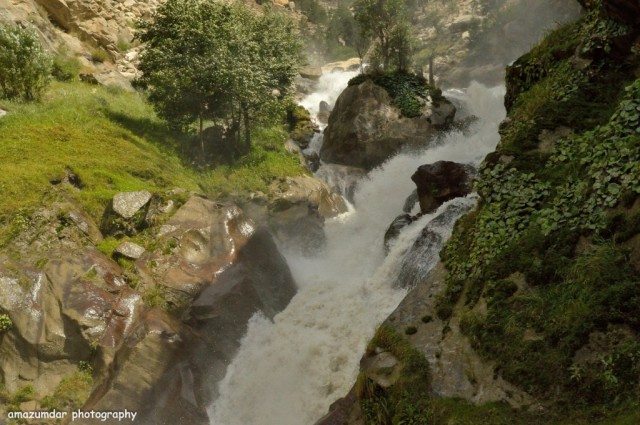 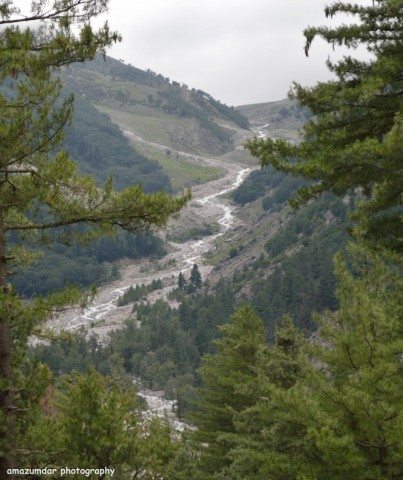 Around 1PM, we reached a place called Tobling, which is a place for some nice tea. While having tea, we can clearly view Khab, where Sutlej meets the Spiti River and Lahaul valley starts. There is a bridge that takes you onto the Lahaul Valley.
While having tea, I had a chat with one of the foreigners who had been to Ladakh. He told us that there are few really big monasteries in Ladakh compared to Spiti. He was also on his way to Nako and Tabo. So I had a feeling the hotel we are going to stay would be the same. And it turned out to be true. 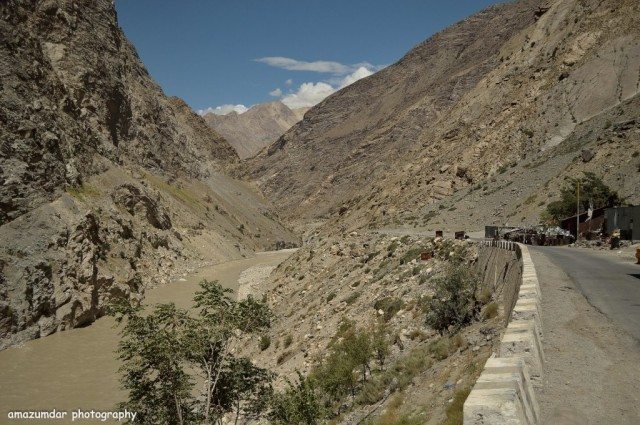 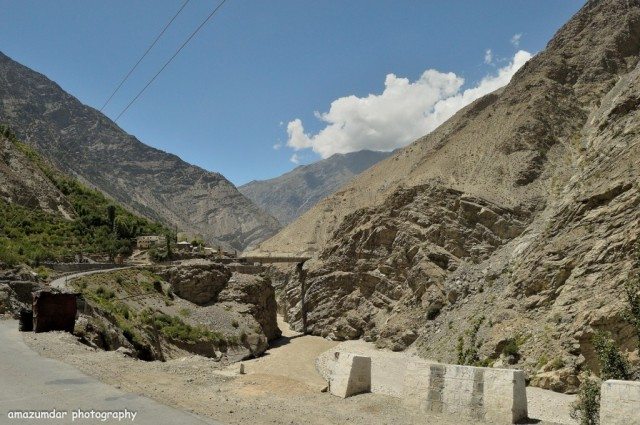 After completing our tea break, we got onboard again and as we crossed the bridge to move into Lahaul and Spiti Valley at Khab, we could clearly see the difference in the colors of the Sutlej River and the Spiti River where they were merging. 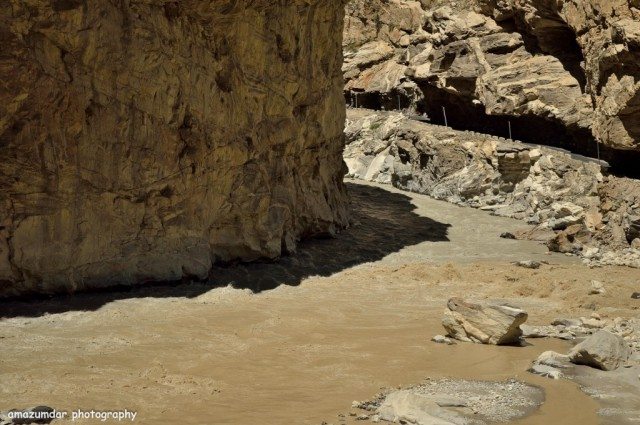 All the way from Khab towards Nako, you just keep going up. Nako is a village at a height of around 10000 ft, and as one goes up, the Spiti River just looks like a small distant water pipe, deep down b/w the barren dry mountains. It was another 1 hour and we were at Nako by 2 PM. 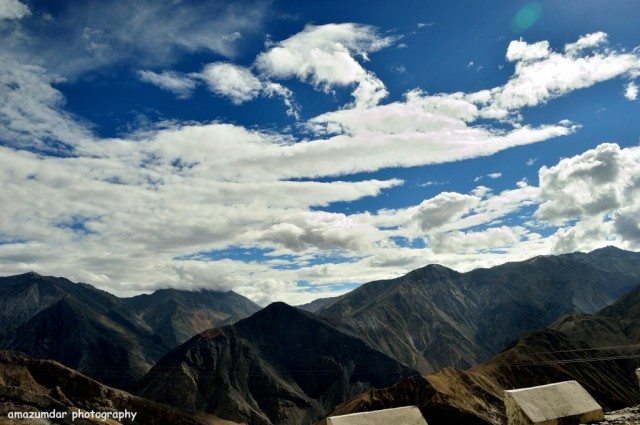 What a lovely, beautiful village Nako is. It’s an entire small village with a population of around 300 at such a height. Lovely greenery, farming. And off course the best part was the Nako Lake. It is beautiful, pure, lush greenish water. There are few Himachal Emporiums there with typical Himachali garments and apparels. One can do some time of shopping in there. 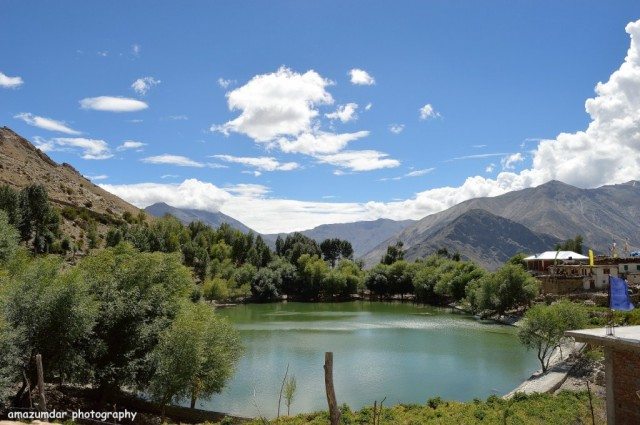 Go in for a nice little walk through the entire Nako Village for around 30-45 minutes is a lovely experience. Occasional interaction with local village people gets you a lot information about the entire area. 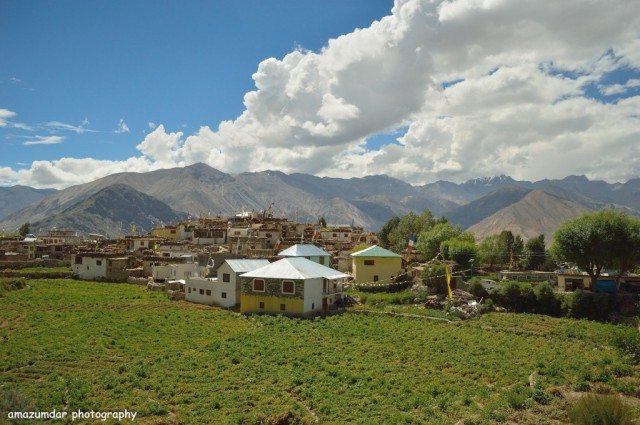 Another view of lovely Nako Village

Lovely hotel with a lovely lunch. One more special thing about Himachal specially the Spiti region is the peas and apples there. Peas are really sweet and my recommendation will be to have anything with peas in any hotel.
Apple Trees in Kinnaur districts in Himachal (Sarahan).

We finished off everything including a nice walk of the market by 3PM and started for Tabo. Nako to Tabo is around another 2-2.5 hours and through the lovely valley with the Spiti river gorging through with huge flow, we just kept moving ahead. Numerous stories by Lekhram, gossiping along with the amazing surroundings all through makes it really enjoyable. We slowly crossed Noiling, Chango and many many small beautiful villages with populations ranging from 30-200 and reached Samdoh. Although Lekhram told us that Spiti Valley starts from Khab, but officially, the Spiti district starts from Samdoh and ends in Kunzum pass. The entire Spiti Valley route averages a height of 14000 ft, which makes it really dangerous, yet adventurous. 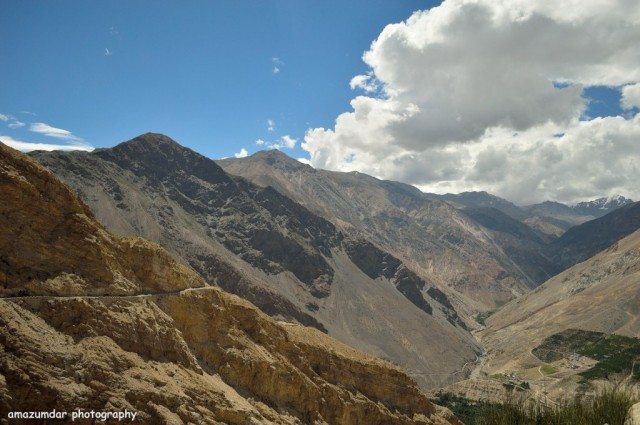 From Samdoh on way there is Kaurik which is around 17KM up and is one of the borders with Tibet. The way goes into Tabo village, and we off course took that route. 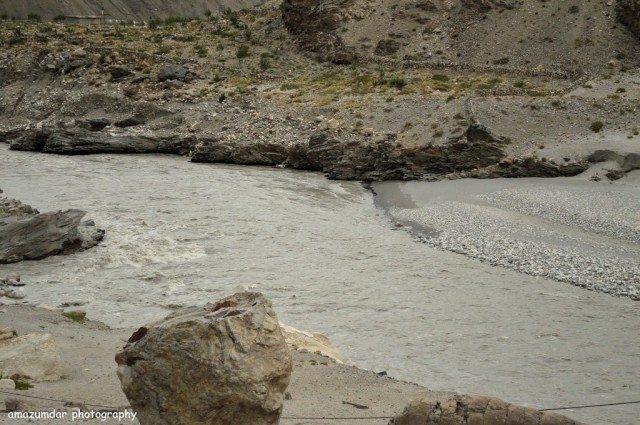 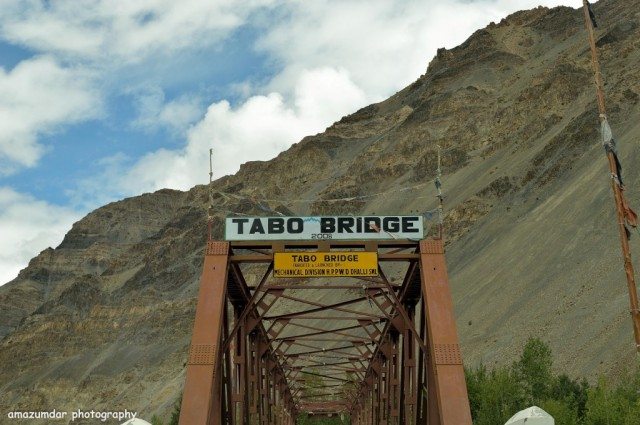 Bridge – Entrance to Tabo from Nako 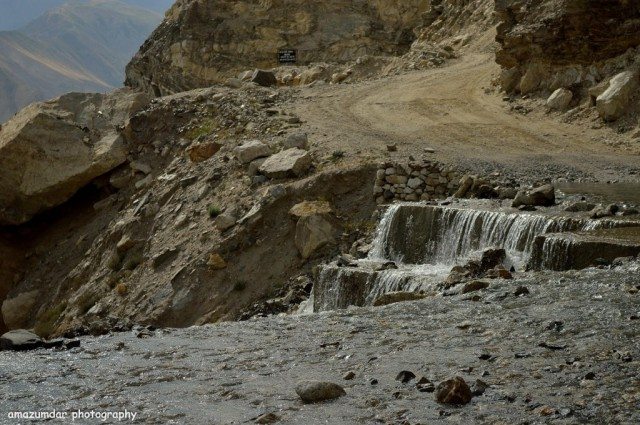 Waterfall onway to Nako to Tabo

Moving this way, we reached the lovely and one of the best villages Tabo, by around 5:30PM. And what a beautiful village it is. The hotel was easily reachable, and we checked in quickly and put the luggage in the room. Without a small delay, we just rushed out of the room to have a view of the village. The Tabo monastery considered to be one of the oldest and most important, was close and was to be opened next morning. So me, and my parents decided to walk through the village. On one side there is a huge helipad at that height, by the side of the Spiti river, while on the other side, a lovely farmland across the village with small kids playing all around. 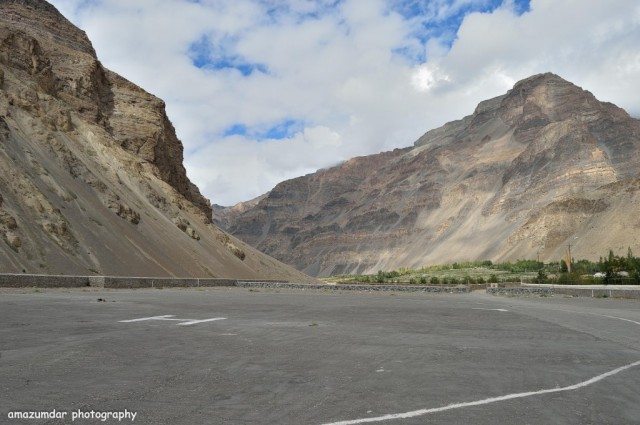 Far off in a mountain is written in big big Tibetan letters, the name of the village Tabo. Oh it’s just awesome. 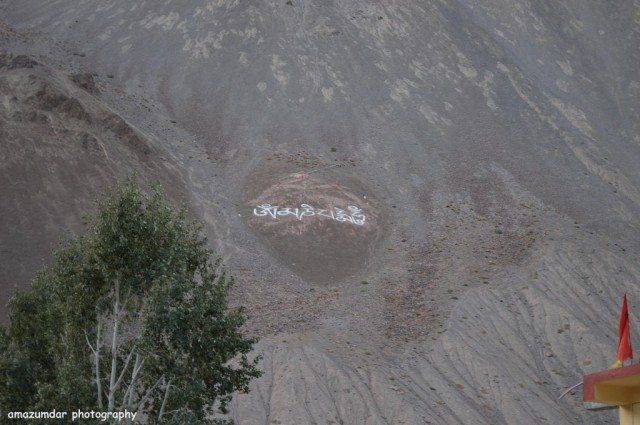 The entire evening and during late night, we ended up roaming, gossiping with other guys and foreigners around in the hotel. Lots of foreigners all around. As a suggestion to visitors, there is no harm staying in the place for one day and spending.
We almost had tea more than 3 times in the evening before having dinner, where we off course ordered for something with peas. There are lots of pea and Apple trees all around the village. Finally time for some sound sleep and way to go ahead the next day.

The drive to Rankandiyal from Kirtinagar is around 8 kms along a small hill stream.In the month of June,the water was very clear and one could even drink it.I can vouch for its purity.The whole feeling was nostalgic since it was after 6-7 years that I was visiting the place.The sun was following with us and in no time,we reached the village.We went straight to the nani’s ancestral house where there was a big pandal and music was full on.The whole atmosphere was very divine and we were feeling very light after a long day of travel.We both were given a room in my uncle’s house.The room was small but quite cosy and we had to take blankets in the night.Soon we both were dead.