It was fourth day of our W.Sikkim trip in May 2007. We woke up early and jumped out to see Mt kabur. It was grey outside. We stood there as if we continuously stared at those ominous clouds, they will disappear. Instead the greyness seeped into our body and mind and we felt that perhaps we would have to spend the day indoors only. A sweet gurgle of a stream provided some relief. A pot of tea arrived and we sipped it quietly. Suman informed us that it will clear up soon and so we got ready for another day.

I would better call that day’s trek as “Dubdi Monastery trek”. Suman, our guide for the day, told us that first we would walk up to the Dubdi monastery which was a steep 2 Km uphill walk from hotel and then we would return by circuiting around two villages nestled amidst dense forest.

We crossed a river and passed by some water driven prayer wheels and started to climb up. Suman was telling us about vegetation around us.

Then he plucked these yellow colour berries and gave us to taste. The berries tasted GREAT – A bit like orange but with some bittersweet taste and the texture was like strawberry. Rachit liked them a lot. He was asking for more. Plucking them was tricky. You had to have feather touch fingers else berries just fall on ground. We spent next 15-20 minutes plucking more and more berries and started moving only after Suman assured Rachit that there would be many more berry plants ahead. 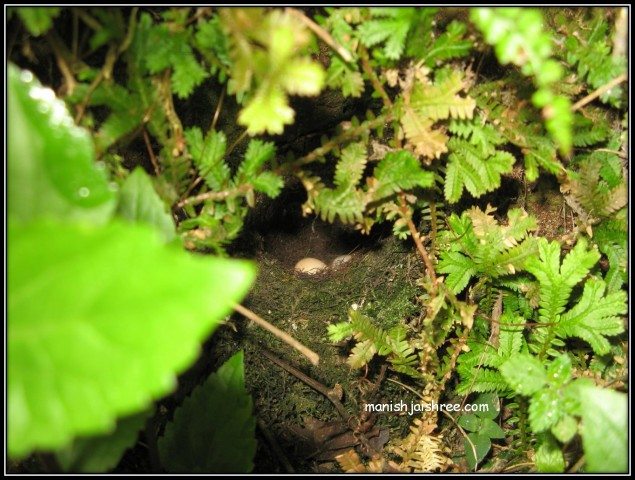 The climb was very steep. Just at that time, Suman showed us this nest with eggs. The nest was hidden between rocks and he told that he spotted the nest because he saw the bird just flying away from its nest. We were thrilled. It was after a long time that we saw any nest. He told us how he loved to watch bird’s nest when he was a young boy. So much so that he would not return home until he found at least one nest. Then he told about how he used to change eggs from one nest to another and noticed the bird hatching another bird’s egg. He also told us about some birds which first eat other bird’s egg, and put their own in that nest. Once those eggs were hatched the kids would eventually eat the bird that hatched them. It was so cruel to listen, but that is the way Mother Nature is.
Soon Rachit was holding Suman’s hand and we were walking in a pair of two. We were a little behind, hearing them chatting about what he does, what Suman used to do; What is it like in Delhi-NCR, what its like in Suman’s village and so on … 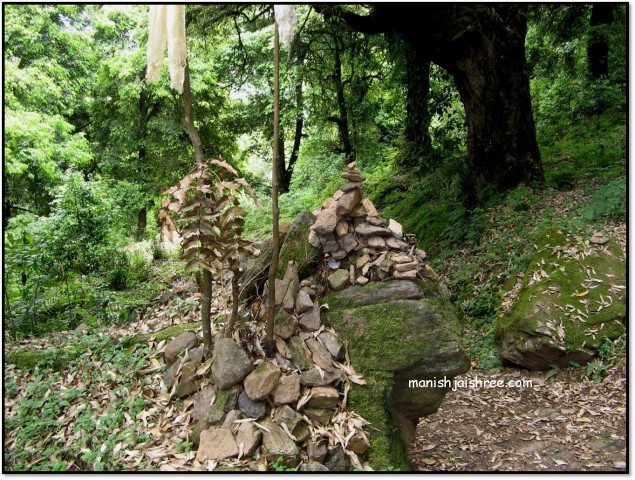 A pile of stones in Stupa like structure caught our attention. It is a general practice there to put five or seven stones one above another and make a wish. Rachit, as he is fond of pebbles, made a Stupa with Suman’s help, but did not make a wish. So Suman did it for him – “Rachit will study a lot and will become a Great man.” Amen! I wished in my heart. 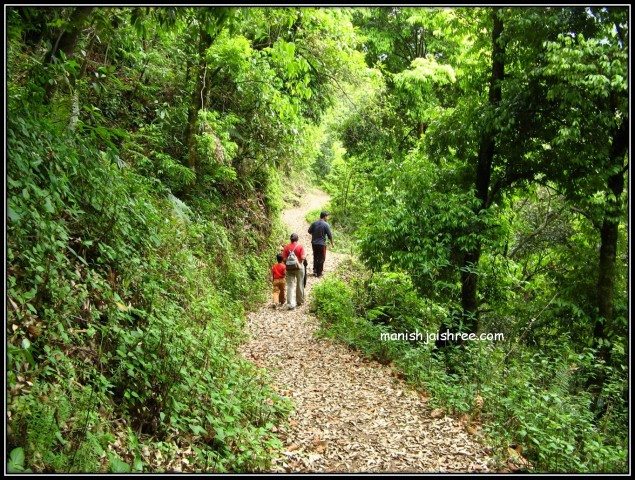 We were passing through dense forest and the path was covered with dried leaves. I felt as if not a single leaf has been taken away from there, since the day GOD first created this place. 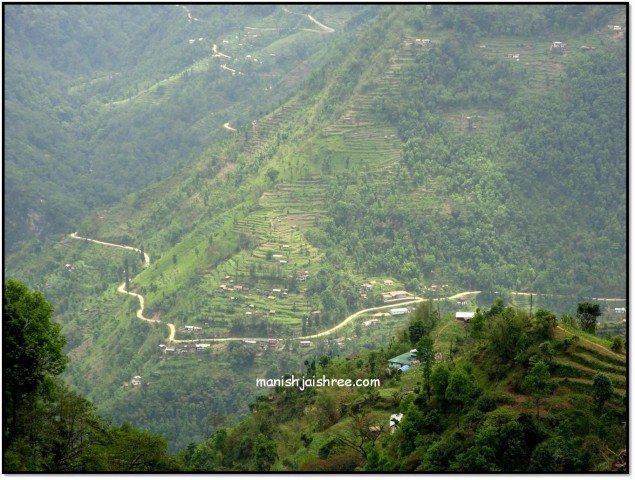 After almost two hours we reached at “Dubdi Monastery”. It is again a highly revered monastery of Nyingmapa order, built in 1701. Its location is dramatic, looking out all over Yuksom. Suman and Rachit sat outside and we went in. This time we were lucky to have a Lama who could speak Hindi. He explained us most of the things inside the monastery. There was a hall upstairs housing hundreds of Tibetan manuscripts, which were brought here when the Monastery was built. These manuscripts are taken out once in a year for a procession of a festival. Priceless treasure – scattered all over India. 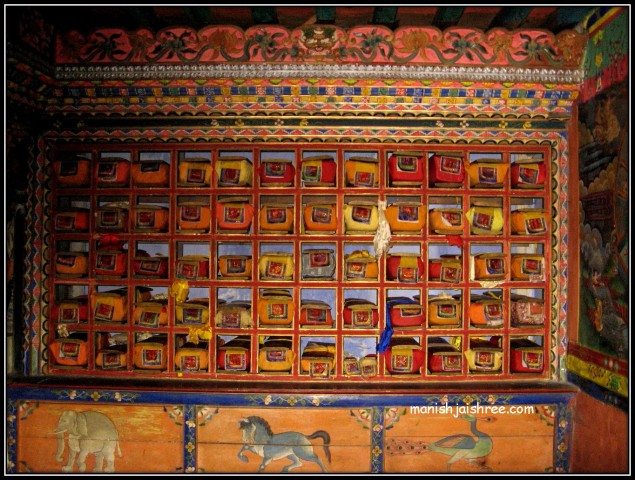 Here we learned about different forms of Guru PadmaSambhav. Each form is for granting a particular wish, just as we have Lakshmi for wealth, Saraswati for knowledge etc. In the same manner different monasteries are revered for granting particular wishes. Dubdi Monastery is revered by Childless couples to get a child.

We moved on and were passing again through wild woods. We were walking along a big wild waterfall and deep down there was a bridge up to which that stream of water was flowing down. I wondered if we could go there. 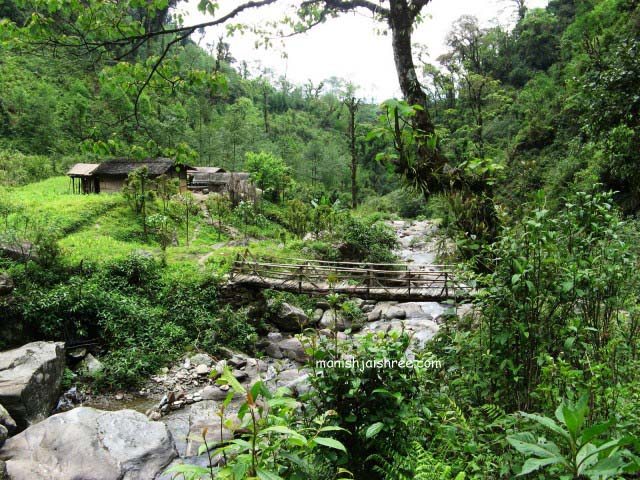 This was all so extravagance of Mother Nature. We have been to many places from Kerala to Europe, but this was awesomely different. We reached that bridge, crossed it and told Suman that we want to get down to river and sit for a while. When Rachit heard it, he was out of bounds. We took a detour, got down to river and settled ourselves on rocks. All of us were busy in our jobs – Rachit was throwing pebbles, Manish was busy taking photographs and I was sitting silently. 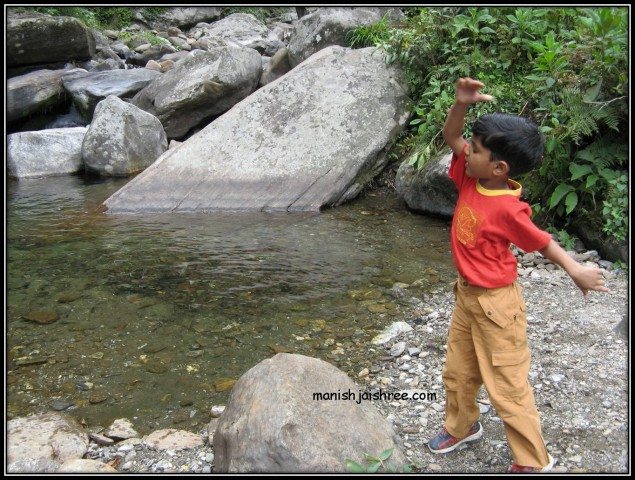 Suman was searching for something in the near by cardamom farm.

This is what he brought with him- young shoots of some shrub and offered us to eat. We peeled it off, added salt (our weapon against any Leech attack) and put in mouth. YUMMY! It was little sour and very juicy. Rachit came running towards us. He wanted to taste it and he too liked it, although not as much as yellow berries. Time to go. Rachit did not want to move. But when Suman told him about another bridge on the way, he jumped up.

Now we were moving along Cardamom (Bari Ilaichi) farms. Ginger and Cardamom are the cash crops of Sikkim. We stopped at a small house, which was the only house in that entire wilderness. There was no one in the house. Their Goats and hen were there in their pet house. Manish wanted to take Rachit close to chicken. I stopped them from going too close. I explained Rachit that Papa Hen (Cock) simply does not like it when anybody goes too close to its kids. In-fact it may attack you to defend its kids. Questions came pouring on me, which I directed to Suman for answers. So again, the duo was walking and chatting.

Suman showed us different varieties of bamboo. There are some 20 varieties of bamboos in Sikkim. We asked him about Rhododendrons, but the season was over. Sikkim has 34 varieties of Rhododendrons that bloom from late March to April. Orchids also bloom at that time. Alas! The school authorities do not know all about this. He showed us Orchids (without bloom) on trees- sometimes four five varieties of Orchids on one single tree. We were going deeper and deeper into forested hills. Except for the Dubdi hike, the trek was gentle. One can come here even with a small kid.

Suddenly the duo stopped and waited for us. Suman pointed to a wild white orchid in bloom. 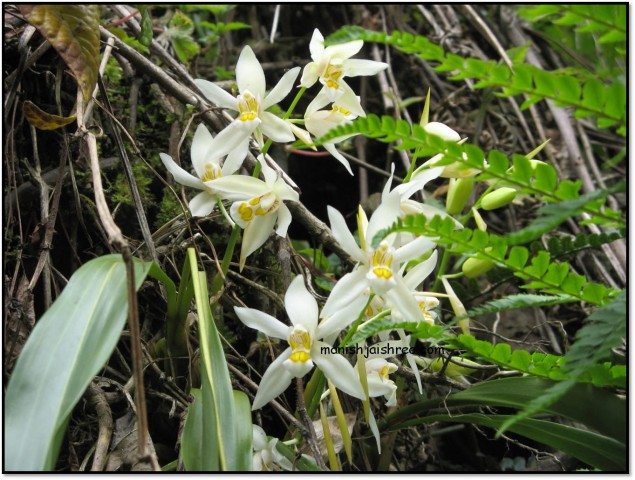 How wonderful it was! It was for the first time that we were seeing any orchid blooming in natural habitat. He offered to pluck it for us, telling that it will remain fresh for a month in flower vase. I politely said No, let others also enjoy the beauty. 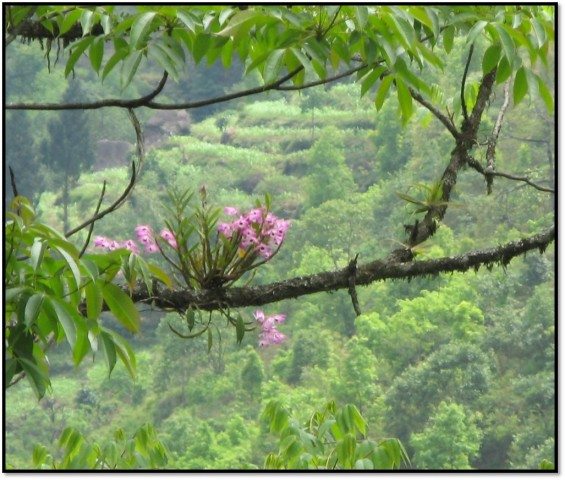 Then we spotted this pink Orchid in bloom. These were common orchids. The rare varieties of Orchids are generally taken away and sold at price of 15,000 to 30,000 Rs. To see the rare kinds one has to trek at high altitudes and that too on off beaten paths.

We reached at some flattened mountaintop and took a break to snack on Pistachio, peanuts, cashew nuts and “Aloo parantha” with juice. Having got our strength back, we climbed down to another bridge, passing through bamboo trees, wild flowers & Orchids.

It was a long bridge held in place with ropes above a big stream. We crossed it and stopped at bamboo grooves. They were huge bamboos, so thick that I couldn’t hold them with both palms.

Finally we reached hotel around 3:30 pm and ordered for the usual lunch of dal,roti, sabzi, rice and a sikkimese dish Thupka. It is a noodle soup with vegetable. All the preparation was good and Thupka tasted GREAT.

We stretched our legs in their lovely garden, sipped coffee and handed over camera to Rachit. It was good watching him photographing the flowers so keenly. End of yet another Joyful day for three walk alcoholic teetotallers :)

Summer in Sikkim IV – Yuksom was last modified: May 17th, 2019 by Jaishree Khamesra