“Thousands of tired, nerve-shaken, over civilised people are beginning to find out that going to the mountains is like going home; that wilderness is a necessity”

Having burnt sufficient calories while trekking to Bodha caves, we re-fueled ourselves with Dal-Roti-Sabji sans Aloo-Pyaaj and stretched in verandah. Mt. K was still hidden. The Maharashtrian family(another guest at resort) had to leave next day, maybe without any glimpse of snow-capped peaks. We were showing them photos of Mt. K , captured in Pelling. They took a sigh. Again the wish rode on wind. Suddenly clouds started dispersing and glimpses of mighty Kanchendjonga were visible right from the verandah. Manish was surprised, as he was not aware that the veil of these clouds was covering such spectacular views.

That day the clouds had decided to show us the beautiful views. And it had got the appreciating spectators too. Everyone from the resort was out – Guyrmee, the Bengali couple and the Maharashtrian family. The Kanchendjonga was also revealing its ranges slowly and slowly. First a few peaks were visible, then some more of it and in the end a big range of it.

All of us were enjoying the views, sharing the binoculars, imagining how beautiful it would look once the rays of setting sun would fall over it. Even Gyurmee was excited although the view was not so rare for him. Everyone was spellbound, only a little short of clapping. I think all good things are for short duration only as otherwise we would not be able to appreciate them and start taking them for granted. Soon the show was over and the curtains were down. A thick veil of clouds again covered the mountains. 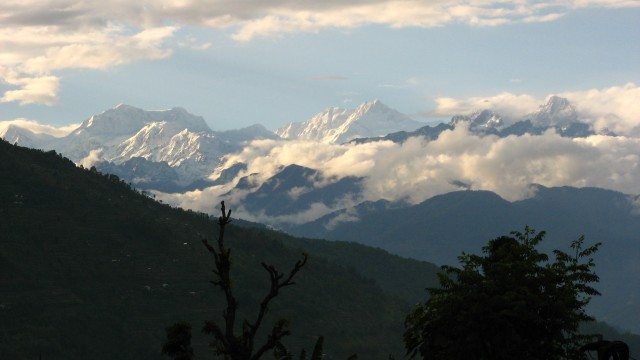 The venerable Mt Khangchenzonga is the world’s third highest peak at 8596 mtrs. From the Sikkimese side, Mt K has been scaled a few times but the climbers returned from a few feet below the summit in reverence to the religious feelings of people.

Coming back to my day-log, a very rewarding trek to Rahu Ney (the Bodha cave), the spectacular show of snow-peaks, was to be followed by a bonfire. Dorjee had done the arrangement for bonfire. Initially it drizzled and we thought that the effort of Dorjee would go in vain. Soon the drizzle was over and all of us were sitting around the fire, talking and enjoying it. Gyurmee’s father also arrived on that very evening. He was in administrative services with a very personality suiting to his stature.

Discussions ranged from: The victory of Mayawati in then recently concluded UP elections, communist regime in West Bengal, about the Sikkimese administration fast catching the mainland’s sluggishness and corruption, Bengali sajjan blessing Rachit to do something in applied Physics –Manish’s chip designing does not bring enthusiasm to him as there were no chances of radical innovation. Manish asked Gyurmee’s father that which is the safest state among seven sisters and the answer bowled us out – Nagaland. He told us that in a recently concluded meeting of N.E state, representatives from Nagaland wondered that why tourist feel so unsafe to come to Nagaland? Nagaland has a tribal culture and these tribes are very protective about their guests. I was unsure, but this was the reply from a person who has more knowledge of the subject.

Fourth day in Bliss resort and my last day in Sikkim: Next day again we woke up early. Mount K decided to show its beauty once again. 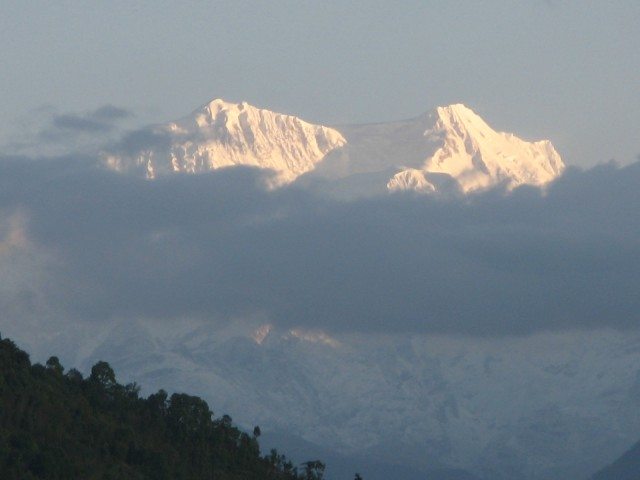 I wanted to enjoy the wonderful Bliss resort just relaxing. But Manish is a restless creature. Sitting whole day at one place and that too in resort, is very difficult for him! Ok Fine, we would go down till Rangeet River and walk along it. We walked in the opposite direction to the Mangalbarey town and reached a small village. We planned to go hitchhiking down to Rangit River, take a walk along the river and, come up again hitchhiking. We waited there for a long, but couldn’t find a single vehicle going down.

After some time we realized that it had become too late to go down and to walk along Rangit River. It was quite possible that while coming back we would face similar problem and in night the situation will aggravate. We walked back to the resort. Gyurmee was surprised to see us back so soon and asked the reason. After knowing what happened he announced, “Ok guys, come with me and we will go to the river.” Rachit jumped. Gyurmee drove us to the same small village, (I am not able to recollect the exact name now) but instead of taking the way that was going down, he moved in other direction. There were mountains everywhere, in all hues of green, brown and yellow; painted with randomness and spontaneity, oozing strength and beauty on a canvas of blue sky. Rich and poor, naive and intellectuals, young and old, all could have a fill of their eyes and feel equanimity.

Gyurmee asked us what you feel about roads here. We told him it’s so nice to see such good roads even in remote Sikkim villages. He stopped and pointed to a road that was on the mountain in front of us. He said that the people would never know that how others have suffered for their convenience. At least twenty eight workers laid their life to make road on that mountain. At that time I understood the cost of that road. I wish that someone would put this fact on a board there. A gentle reminder of the extreme sacrifice made to ensure the smooth drive. 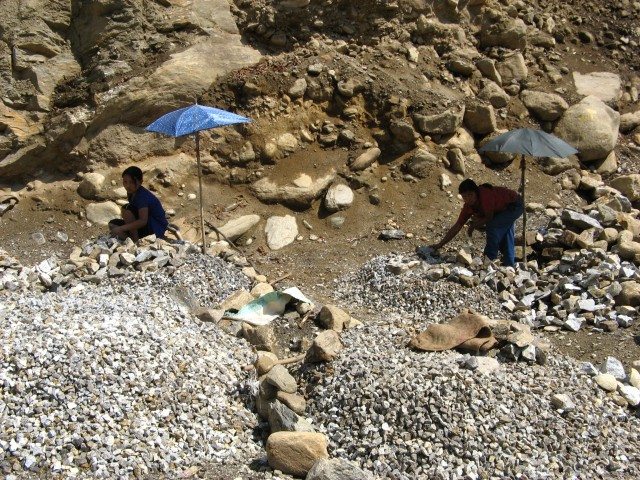 Suddenly a beautiful bird picked something from road and Gyurmee immediately stopped. We had to shoot it fast. Gyurmee had the camera, a perfect click and the bird was shot. There was a smile on Gyurmee’s face as the bird vanished very fast; still Gyurmee was able to shot it. 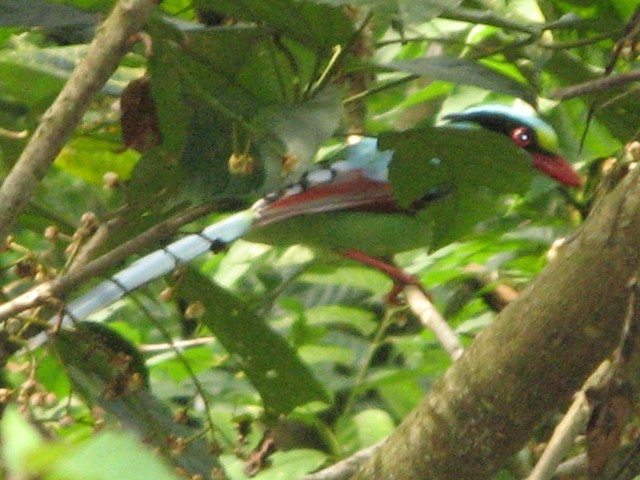 He stopped the car and led us to a park and then a bridge and onto a stream with huge boulders which forced its otherwise ferocious nature into gentleness. 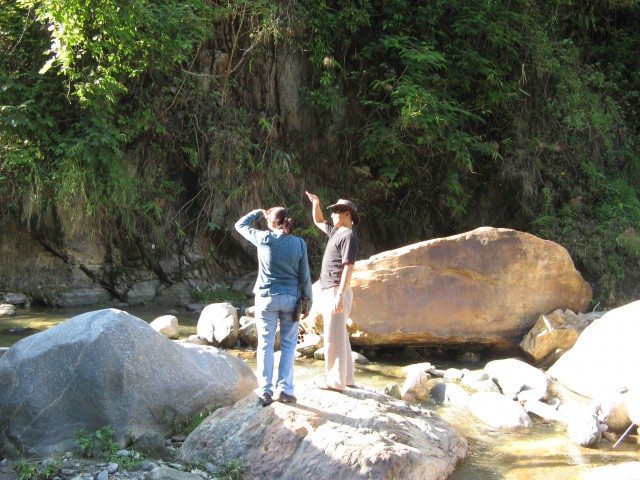 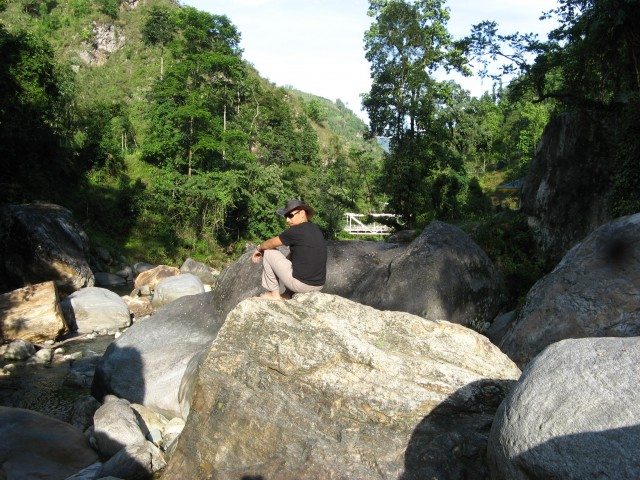 Rachit was busy balancing himself through the stream from one end to another-again and again. Then he started to float boats, first with the leaves and then with the twigs. 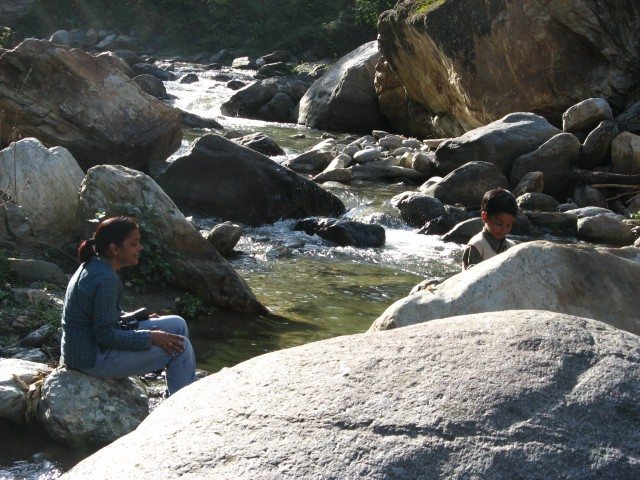 Sun was about to set and hence the time to return back. Tomorrow early morning I would have to say good-bye to Sikkim. I wanted to capture every moment in my eyes. While coming back Rachit slept in Gyurmee’s Max. It was a surprise for me. He must be very tired otherwise he cannot sleep in moving vehicles. When I was telling this to Gyurmee, there was a naughty smile on Rachit’s face. He was fooling us!

I had to make the most of my last evening. Once Rachit slept, we came out. 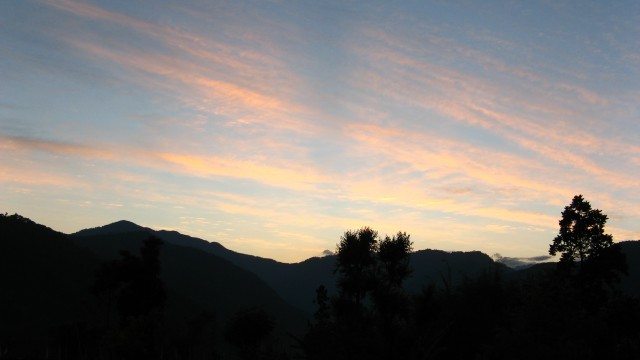 It was a clear and starry night. It was the sky of my childhood when we would sleep on roofs during cooler nights of summers of Rajasthan and do nothing but star gazing. I was walking with Manish hands-in-hand. A scented cool breeze was blowing. There were few houses on faraway hills, all twinkling with lights.

Something captured my imagination. Behind us, in pitch dark surrounding, there was a house in which a bulb was hanging from the ceiling. There were three friends who were playing carom. It again made me nostalgic of my childhood when I used to spend evenings playing carrom and chauper with my brother, sister and daadi. It was a beautiful photographic opportunity, but my camera could not capture the night scene so nicely. The picture was getting blurred in camera but crystal clear in my eyes ……… even today.

Bliss Resort is situated at Biksthang in Pelling district. It can be reached either through Pelling or directly through Bagdogra/Siliguri(120 kms). It is very much an off the road place, perhaps too much ‘off the road’ for too much ‘on the road’ people.

The main building has four large rooms at ground floor and two on first floor.

There are two cottages a little away from the main building, nice for those wanting privacy.

One has to take a personal or hired vehicle to reach there. Public transport is very irregular.

Things to do :-)
Wake up to see great views of Mt Kanchenjunga.
Simply unwind and chase birds around the resort, spend afternoons under the shade of trees or in the sun.
Walk barefoot on lovely walkways among flowers,shrubs and trees, and let the dew get yourself out of you.
Trek to Rahu Ney and lhentse monastery.
Visit hot springs near Reshi