Hahahaha. Yeah I know the name of the post is an oxymoron but that’s exactly what happened this Saturday. Me and PBnrg were just lazying around at her home, just had lunch pretty late at Adair’s Kitchen (chicken fry and waffles) and planning to watch a movie or take a nap (whichever seems better) after the lunch. Well, after returning home, we did watch a movie and then all of a sudden one weekend, during my sojourn in the US that PBnrg and me had this ebullient urge not to sit at home the whole day but go out somewhere- around Houston or far from Houston. Well, there is a saying “God proposes man disposes”, PBnrg proposed a short trip to San Antonio and I disposed.. :) :D

Off we went on PBnrg’s Volkswagon Jetta (an uber cool, sensational car of superior caliber- hope to buy one day) via I-10 E. San Antonio is approx 200 miles from Houston. We lazed around most of the time on Saturday morning till late afternoon and hit the road by 5 o’clock. We set out at around 5 or 5.30-ish in the evening and reached our destination at around 8.30-ish (of course the roads are leading exemplar of how a national government should be executing their duties towards its citizens. Anyway, no point continuing the usual jargon of us (read fellow Indians) who are apathetic towards the sordid state of affairs in our own motherland and our “esteemed” politicians and representatives on the global map are detrimental to the already discreditable fettle of my motherland.) While on our way, we watched the sky changed its colors as the sun went down to rise again on the other hemisphere (also containing my man who was sound asleep while I was on my way to San Antonio on a 3 hour drive). The change of the colors were simply mind blowing. (picture below)

So we parked the Jetta at a public parking place and ventured into the alluring city with our DSLR’s. Below is just one of the numerous shaky photos which I could take with my simple iPhone. But yes, the drive was refreshing with numerous discussions on life, living, people, relationships, friends. Long drives are always refreshing.. 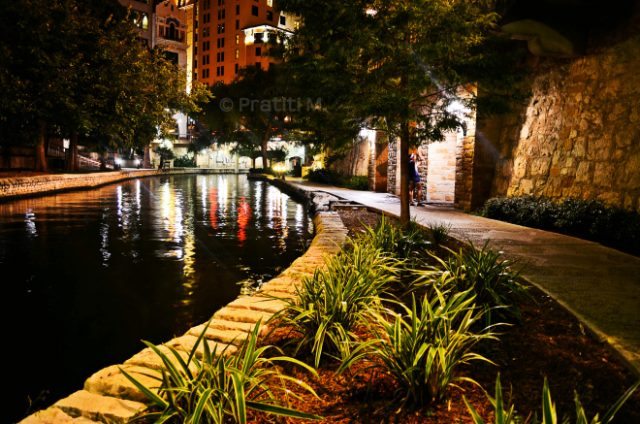 Glimpses of the Riverwalk, San Antonio

Above is just a glimpse of the famed San Antonio Riverwalk right at the heart of the city, the euphonic chatter of the people and the soft music from “that” restaurant appeased the exhaustion. The ergonomic environment of the place in totality is so invigorating that it would be a blasphemy not to be ensorcelled by the tranquility of the place. The Riverwalk is an artificial, man-made body of flowing water right at the heart of the city and one of the most beautiful locales in the city. Almost all the famed hotels are built right along the Riverwalk like Hilton, Trident, Radisson etc etc. We spend the evening at the Riverwalk, doing what we love the most- clicking and watching merry people enjoying the perfect evening by the Riverwalk as if there is no tomorrow. The people here do live their lives king size, with no worries in the world.

We had our dinner- chicken roast and bread and some soup at one of the restaurants by the Riverwalk at around 11pm. It was pretty late and we were exhausted, in dire need of a warm, fluffy bed. PBnrg had already booked a hotel online just to stay for the night as we would be leaving the next morning driving all the way back to Houston. We stayed at El Tropicana hotel, along the Riverwalk at Lexington Avenuejust across the famous Tobin Centre for Performing Arts, by the Riverwalk. The lobby of the hotel is renovated but the rooms are quite old. The locality of our hotel was not so clamorous and the tranquil neighborhood assuaged our exhaustion. We had a nice warm bath and dropped dead on our beds. The hotel was a bit old and shabby in appearance, but nonetheless the rooms were comfortable. I can only faintly remember @PBnrg waking up at wee hours in the morning but didn’t have enough energy to notice the time, but the adhesive power between my upper eyelid and base of the eye was so string that they closed soon enough.  :P :P

Finally when I woke up, the sun was streaming inside amidst the shabby old fashioned curtains of the window and it was about 8.30 pm. PBnrg’s bed was empty, obviously she is a much more enthusiast than me in terms of perfect lighting, perfect mood for photographs (no doubt her photographs speak volumes of her dedication). I sat up in my bed, was in two minds whether to venture out or laze around in the hotel room. Finally, the enticing view of the city (the previous night) allured me to get ready as fast as I can before the sun becomes unbearable so that I can get some quick snaps of the beautiful city. Below is a photo of the Tobin Centre for performing Arts on a bright sunny day in San Antonio.

The Tobin Centre was the 1st photo on a bright sunny Sunday, I ventured along the quiet empty roads towards Downtown San Antonio where I presumed PBnrg would be, capturing beautiful moments with her Canon. I had more or less memorized the road directions (you see I am an accidental geologist, so we are by default trained to remember road directions :P ) as I did not have international roaming activated due to my company’s policies (don’t know what policies of a US based MNC refrain from activating your employee’s roaming services). Soon enough I reached Downtown San Antonio and thankfully I did find PBnrg, engrossed with her Canon. I did not feel quite right to disturb her and I took my own Nikon out to take some pictures.

Entrance to the Riverwalk

By the Riverwalk, San Antonio

The Riverwalk in the morning

A view straight out from the dreams.

While descending, I saw the River Shyok flowing at a distance. As I rode further, I came across the road widening into sandy plains long-drawn-out between the rows of mountains. I stopped and filled in the changing views – the river, the mountains, barren sandy plains on which the roads look like thin, dark lines drawn till horizon. Hereinafter came several small villages, where kids would waved at me, tempting me to given them a Hi-five! The mountains around me were full of gravel, which threatened to come down anytime! This was indeed one of the most unusual places on the planet!