Even Goa will start wailing if we did not make a yearly visit here, thanks to our fondness of this stunning place of beach shacks, the sandy breeze, the yellow sands (unlike the black sands of Maharashtra) and also offering booze at extremely affordable and economic price.

We had a long weekend coming up including Holi and Good Friday and of course Saturday and Sunday- a package of 4 days. We hadn’t quite decided what will be our program for these 4 days, as I was in a pretty bad temper and we have our possession of our new flat coming up. So we were crunched financially (at least we endeavored to spend less and save the maximum amount of our meagre, invisible salaries and have succeeded in retaining a considerable amount of reserve still), and especially I was the one who is uncompromising when it comes to use the paltry reserve to any sort of extravagant expenditure. It is again I who is fond of traveling and exploring exotic, alien locales. So, off we went, embarking on a road trip to South Goa this time propelled by the exuberance of our “youth”- no we are not “that” young, everybody is on the other side of 30 except me…!!! Yaaayyy..!! ;) ;)

We commenced our journey at around 7 am on the day of Holi, aiming to reach Palolem by 8.30-9 pm, of course including the short recess for breakfast and lunch and responding to the calls of nature on the way. The heat was still endurable, the yellow ball of fire was playing hide and seek behind the greyish white fluffy stellar balls of cotton. We decided to take NH4 (obviously) but that one has quite a number of tolls which charge exorbitant amounts for no goddamn reason. The roads are not of premier caliber, the traffic is equally deplorable and road management is another ignominious facet of our country.

We parked our vehicle at A’s friend’s society and embarked on A’s friend’s Honda Brio- a compact yet adorable 4-wheeler of the bourgeoisie with superior mileage. As soon as we crossed Panvel and hit Mumbai-Pune Highway/Expressway, our stomachs felt the hunger twinges. Nonetheless, the Mumbai-Pune Expressway is a prodigious construction by the GOI, expediting the jaunt between Mumbai and Pune. This phenomenal piece of “architecture” exalts the caliber of the GOI, IF they sincerely adjudge the service to the common people as sacrosanct.

But you are bound to get hell lot of traffic when you reach Lonavala or Khandala exit because-1. the truck/lorry drivers are gallant enough NOT to follow lane discipline and they are so preposterous that the cacophony of the indecorous honking behind them does not seem to castigate them already. This is such an idiosyncrasy of the truck drivers, all of them seem to enact this facetiously and in concord, 2. there are some abject, callous, obtuse sadists who perceive overtaking the already queued vehicles and barging onto the lane of the forth-coming vehicles is “sagacious” and will catalyze their “expedition” on the expressway.

So we propelled ahead on our own torpid pace and finally we could go past the imbecile truck drivers. Anyway, once again the needle could hit 120 km/hr on the speedometer and with our blithe fervor, we reached Pune within 2.5 hours, which would had taken 1.5/2 had we not encountered the debacle near Lonavala/Khandala. We had our lunch at a Maharashtrian dhaba, I was pretty surprised that the food was delectable, especially the chicken curry. Usually Maharashtrian dishes are unappetizing (I remember the insipid Malvani cuisine we had at Tarkarli- my tastebuds were tormented and crying out for salvation). More or less the cruise was pleasant, occasionally checking the Google Maps for directions. And finally the Goan breeze on our tired faces heralded that we have reached our destination- Palolem. We had made arrangements for lodging at Cupid’s Castle right next to the Palolem beach for that night as they were charging too much for an air-conditioned room. We tried to parley with the reception guy there but he was adamant and an obtuse fellow, so we dropped the idea of wasting our time and took 2-a/c rooms. The rooms were comfortable enough and we were contented. We squandered no time and soon we were out on beach leaving our luggage in the rooms. The cool, pleasant Goan air felt so invigorating that all our exhaustion wore away.

We made our way to the breezy Palolem beach, our hunger pangs left us quite exasperated. We were desperate in our search for a restaurant, as most of them had shut down (it was past 11 pm). Finally the Gods rescued us and we found a (good) restaurant right on the beach, a perfect ambience and the sea-breeze in our hairs. We ordered quite a number of dishes- mainly chicken as I am unable to ingest the typical seafood like Mr. H or his friends or my friends. We had our share of satisfaction of our paunch, had a nice stroll on the beach, wetting our feet by the Arabian while the fishermen are out there on the horizon- an onerous task of finding the fish- for their family and for selling them to earn their livelihood.

We returned to our comfortable AC rooms soon enough, hoping for a leisure-filled day the next morning. The respective husbands woke up quite early the next morning seeking for a more cheap lodging as we don’t believe in wasting money on staying at the hotel, rather it is economical to spend the same or more amount of our finances on beach shacks or food or sight-seeing.. :)

Meanwhile I attended some of my work which needed my scrutiny and got ready to move out of the costly Cupid’s Castle and moved into a cheaper one- the rooms are shabby and very basic amenities were provided- but thank the Gods the rooms had AC. We dumped our luggage and set out for breakfast at Round the Cube and had “English” breakfast, but the mash potatoes in the menu wasn’t really “mashed”. It was more of an Indianised version- aloo dum.

The “English” breakfast with “aloo dum” 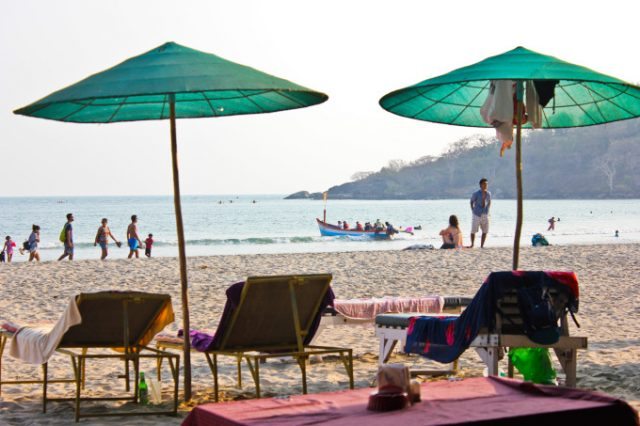 Then we were in two minds- whether to go dolphin sighting or kayaking or sight-seeing. We decided on kayaking and I must say- it’s an extremely good exercise for the hands and upper portion of our body. I had a gala time kayaking while poor Mr. H was scared out of his wits when we ventured far into the sea. It was NOT too far, there were many other people who were kayaking further but nonetheless had to come back to the safer shores. After kayaking, we had our beach extravaganza- getting tanned to the core. Finally we decided we had tanned enough and now it’s time to have our lunch, the breakfast had long disappeared somewhere within the body. We had our bath and came to Fernandez for our lunch. The Fernandez is a nice beach shack with plenty of white skinned people lazying around in the vicinity.

I ordered chicken sphagetti pasta while others had some prawn dishes in which I had no fascination. We lazed around the whole afternoon, gazing into the sea while I tried taking some snaps. I do hope you find the snaps good enough to lure you away to Palolem for a short trip.. :)

I recently had an opportunity to visit Chitrakoot by Road as part of my official travels. The summary of the route followed is given…