Bang Saen, a beach destination in Chon Buri province is situated 100 kms south east of Bangkok along the Bight of Bangkok. Same beach stretches to Pattaya, which is some 30 kms further south. Bang Saen is a haunt for Thais families from Bangkok, who swarm the place during weekends. Otherwise, during weekdays the beach remains somewhat peaceful. We reach here on a weekend evening thus witnessing the beach at its gorgeous best.

We arrive at this cosy guest house run by a friendly Thai lady, Nuan before sunset. It is located right on the beachfront and our room offers inviting view of beach across the road lined with coconut trees and food stalls. Soon we are ready to explore the night market, Bang Saen Walking Street, situated 5-min walk away. 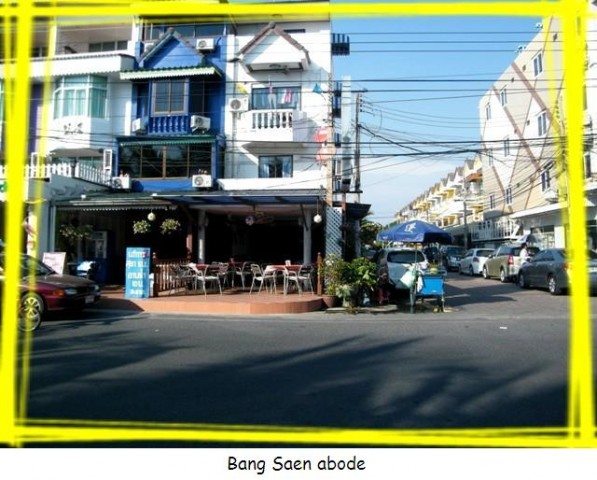 The concept of walking street here has probably originated from nearby Pattaya. This is a make-shift market set up on weekend nights on the beach front, off-limits for vehicles. The scene is supplemented with performance by in-house band groups, mostly students from local university. It makes a heady mix of street market selling exotic wares, rows of food stalls and a live band show on the backdrop of breezy Gulf of Thailand. On offer are funky jewellery, decoration stuff, paintings, tops, skirts, shorts, footwear, accessories and similar objects of desire, many times over. Other two companions are quick to get in ‘shop-like-tomorrow-may-not-be’ mode. 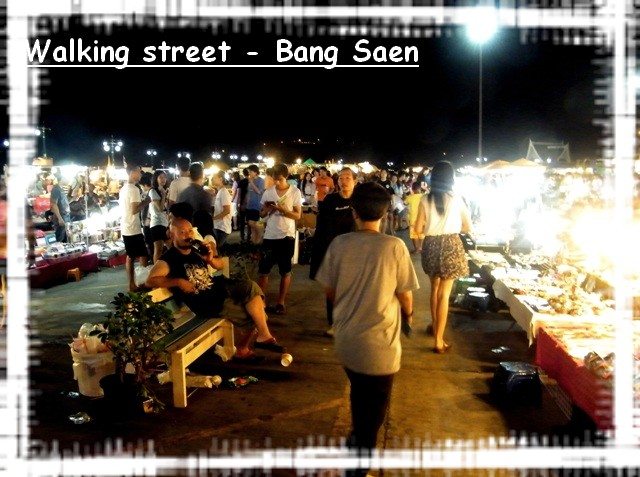 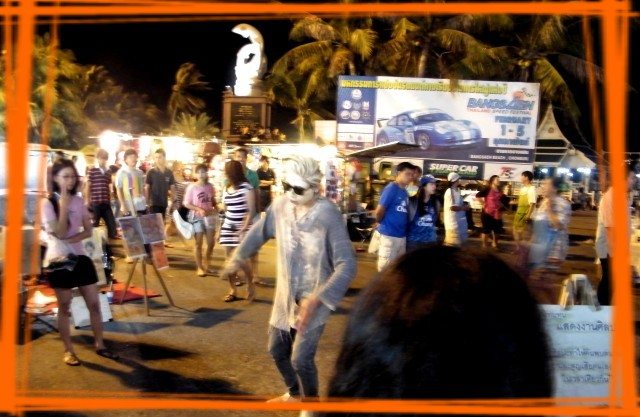 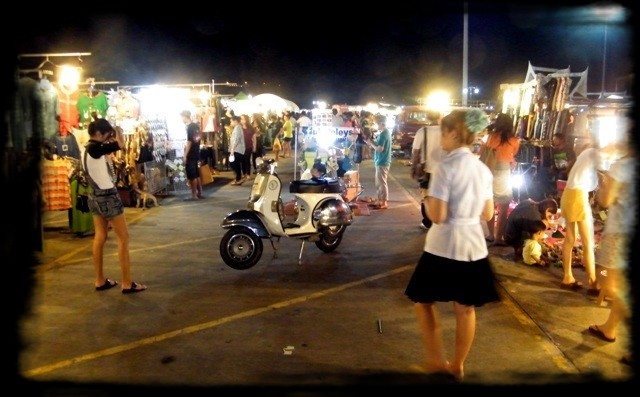 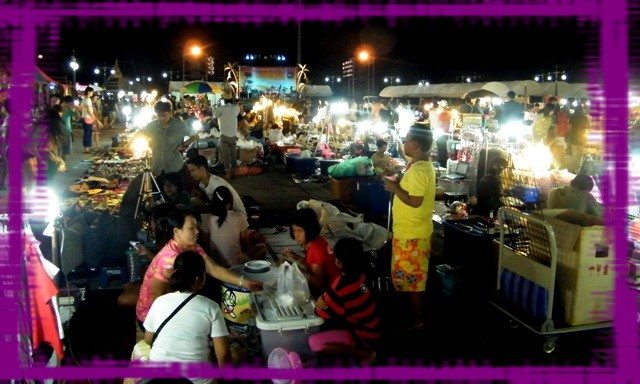 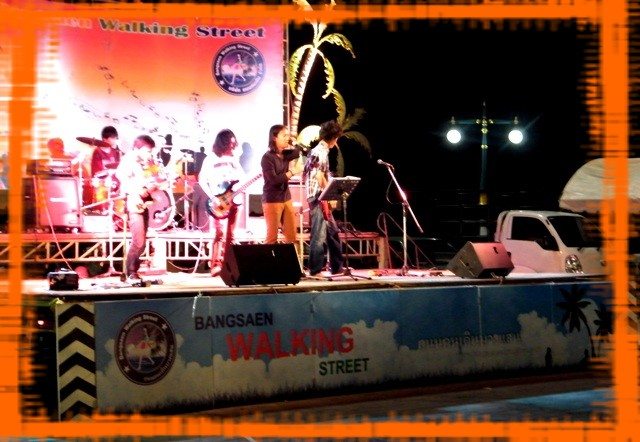 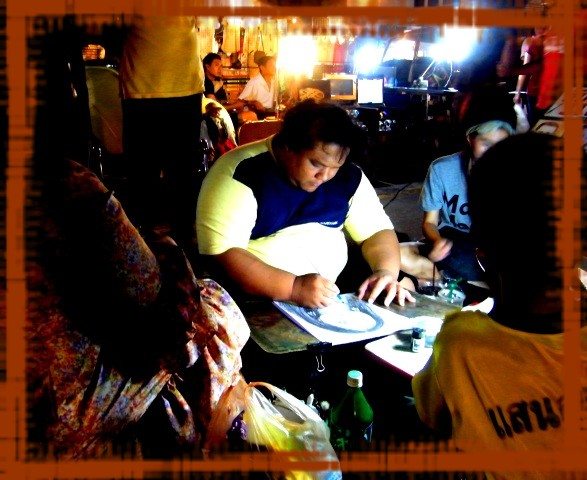 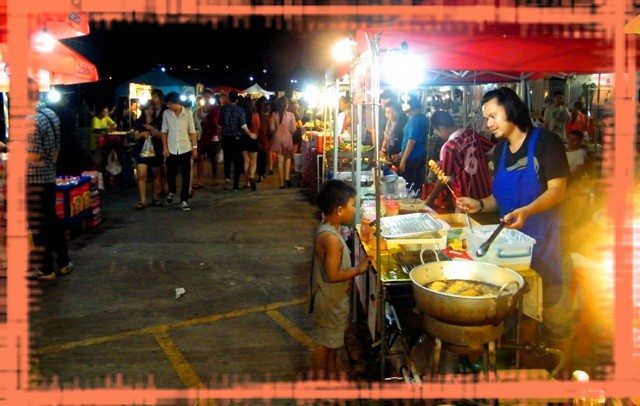 The food scene here is amazing. There are rows of eating joints with sit-outs offering wide variety of seafood and other stuff. We try some known and some unknown recipes. Seafood exotica on offer include prawns, shrimp, squids, mussel, lobster, oyster, sponge apart from fish (includes some unknown varieties), chicken, mutton, pork etc. The main dish is complemented with sticky rice or noodles.

Rice is the staple diet of Thailand. Traditionally, the Thai word for rice is synonyms to ‘eat’ and a traditional greeting is derived from ‘have you had rice yet?’ Jasmine rice is one of the most sought after variety due to long grains and flavour (akin to Basmati). Thai rice is usually of ‘sticky’ variety forming lumps after cooking. Even Jasmine rice, which is supposedly less sticky, have grains sticking together when cooked.

Soup is served in a large bowl which has a hollow portion at the centre filled with red hot charcoals. This helps in keeping the soup hot. There is an outlet offering recipes of banana – the final stuff looks like a banana coated in different colours like pink, orange, blue, green etc. 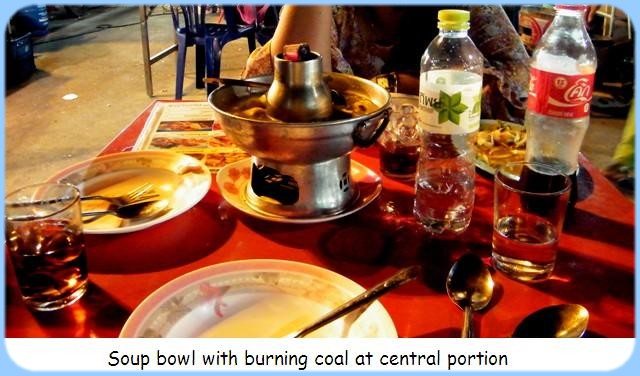 Soup bowl with burning coal in the central portion 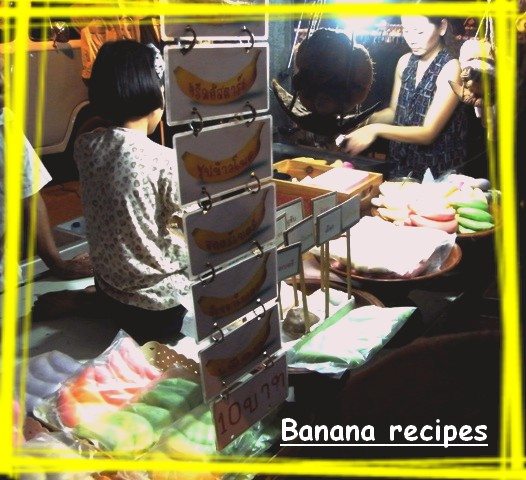 Next day we walk down to the beach. Beach has its own share of food stalls and other knick-knacks counters. We come across a lady vending ripe jackfruit flesh. This is an exotic dish in Bengal (Bongs famously say that you either love it or hate it – immensely; primarily because of its strong odour and quaint taste). Sharmi tries the fruit and it tastes good. Jackfruits look quite different here. They are larger in size and pricklier in appearance. We saw them yesterday while entering Bang Saen but did not recognise them for what they are. It’s only today, on coming across the peeled version, does the realisation dawn. 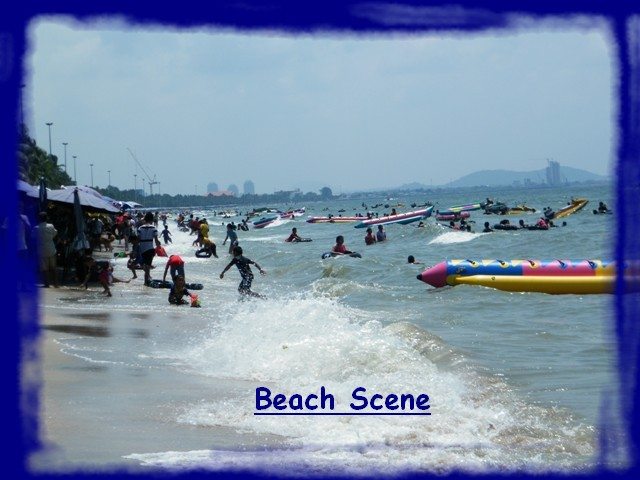 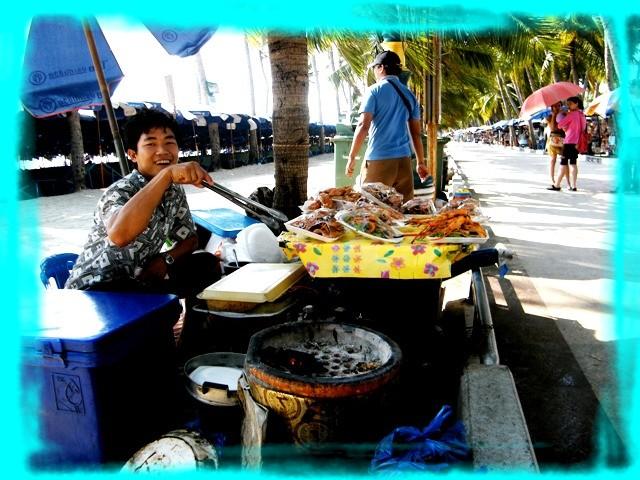 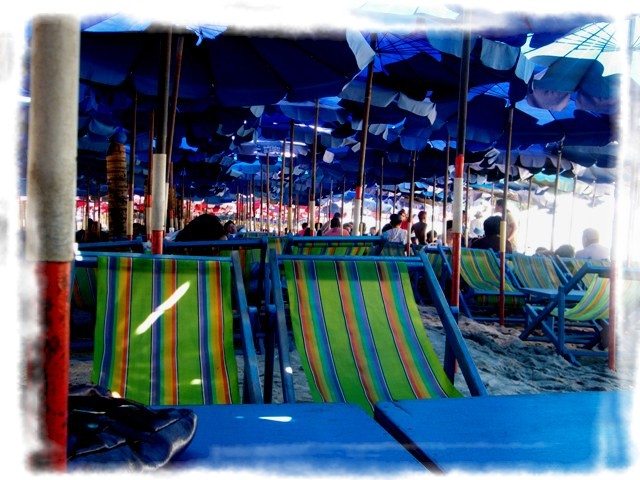 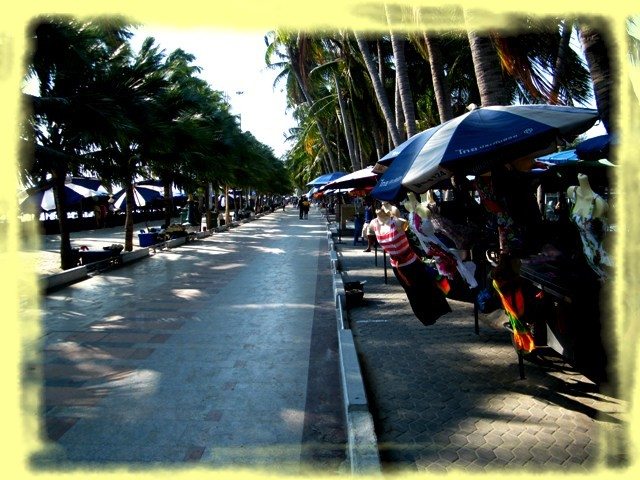 On this weekend day the beach is a “families day out” scene. Families and groups of varying composition have gathered here, as if for a celebration. It is high water time and waves have laid claim to most of the beach front. Outside this, the area is laid out with unending rows of umbrellas erected like a continuous canopy; beach chairs & tables spread squarely under them. The seating can be hired for a small fee for the whole day. We book a 4-seat setting next to the waves and get on to our business; daughter runs into the waves, madam lays herself luxuriantly on the chair and I scamper to the food stalls lined up across the promenade. We spend almost the entire day (as against our plans of limiting it till noontime) enjoying ourselves, observing others and getting into scrambled chats with the locals. 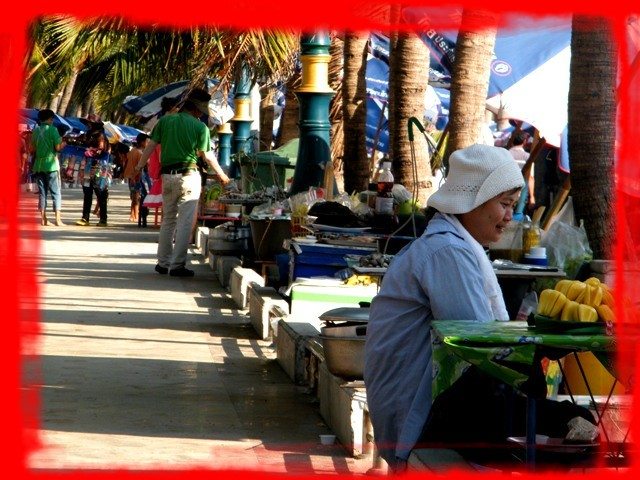 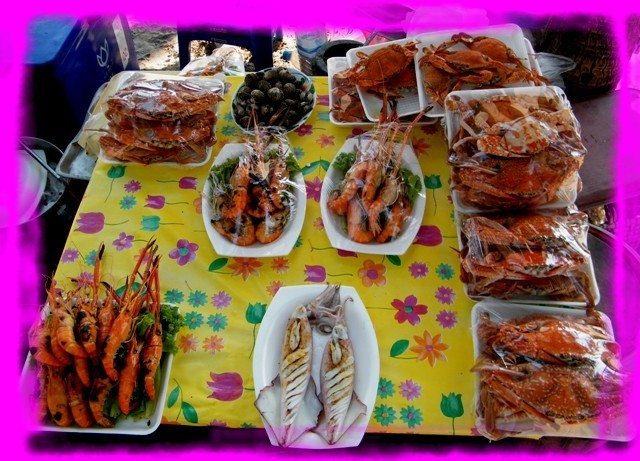 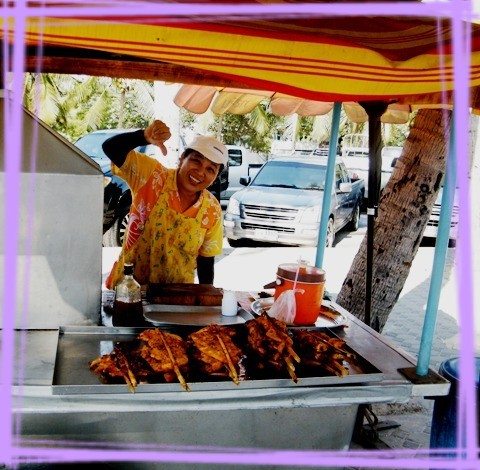 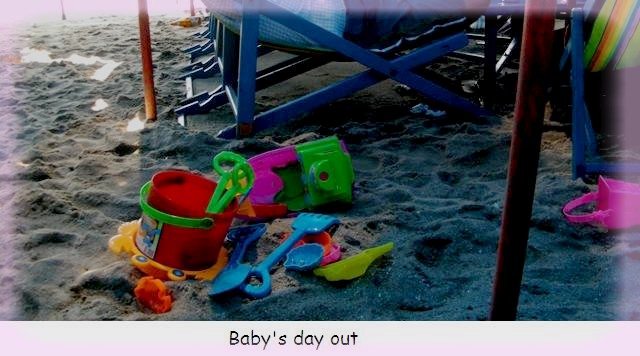 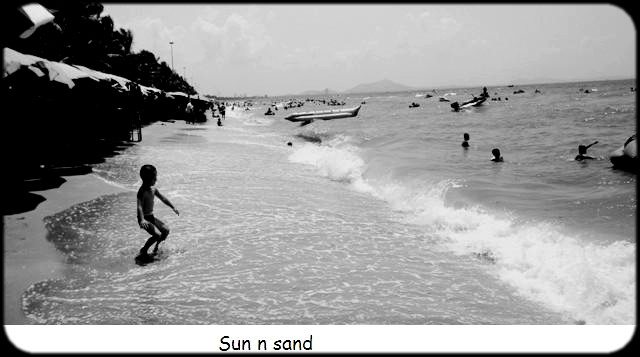 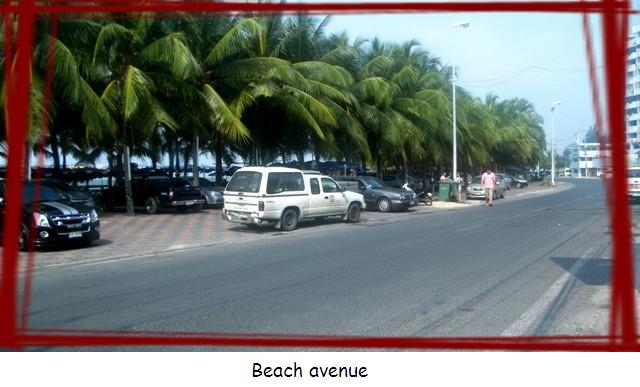 Constant stream of vendors selling foodstuff and other wares criss-cross the area. Soon Sharmi links up with a lady offering Thai massage. Though it was on her agenda before coming to Thailand, she did not probably expect to get it so soon, so easy.

Fact 1 is understandable. Fact 2 is what we observe in Thailand, here on this beach and elsewhere. Thais enjoy eating and they do it constantly through the day – on a beach day the family arrives and orders something from one of the stalls. After a while, family members take out their own eatables from the picnic basket. Not much later the scene is repeated, punctuated by irritants like children running off to the sea, husbands flashing out bottles of beer, ladies getting into intense discussion about something apparently not very unfamiliar and so on. Many families carry their own barbeque sets (chulha like arrangements) complete with semi-cooked or raw food which is to be had in between savouring the locally available stuff.

We force ourselves out of this place by late afternoon, not having had enough of it.

Our next destination is Pattaya, some 40 minutes drive from here. Once there, we do a perfunctory ‘Pattaya darshan’. The place looks ‘plasticky’; as if coated in a shiny wrap where wrapper matters more than the wrapped. We drive across the malls, get a peek into the floating market et al, but my companions are not much interested in spending time here. They are clearly focussed on a more critical issue – Bang Saen walking street. Soon enough, we are driving away from Pattaya so as not to miss the night market.

It may be worthwhile to mention here that Pattaya’s notorious hedonist streaks are attributable to the American soldiers. Some five decades back this was a sleepy fishing outpost which was discovered by American GIs posted in nearby Army base. Later on during Vietnam War, Pattaya became a hot destination for fun and frolic (and sleaze) for the American soldiers on leave. Inflow of dollars followed by other international visitors and currencies helped in bringing about the transformation, as also disrepute to Pattaya. Things are apparently improving since authorities here have taken cognisance of the matter. Concerted efforts are now being made to place Pattaya as family destination.

On our way back I try this transaction at local ATM using my bank’s debit card (about which I mentioned in Part 2 of this series). A withdrawal of 5000B, I am informed by sms, entails INR 9980 (when the going conversion rate is 1B = 1.63 INR).

The owner of the seafood stall whom we befriended yesterday does a prolonged handshake with me. I am getting addicted to Singha beer (popular brand here; another being Chang beer) while my better parts are away shopping. I work on the beer cans and engage with this friendly owner through partially comprehensible exchanges. I would put the figure at 10 percent – no, not the alcohol content in Singha beer but my understanding of what the guys is saying. It does not bother me though; or him, by the looks of it.

Spoken words are not the only way to create bridges between humans.

Traditional Thai greeting is called Wai. it is similar to ‘Namaste’ where both the palms are folded together. However, vertical position  of the palms vary with occasion, viz. palms held high at the level of forehead is meant for divinity, etc. As we depart, we exchange a wai with the stall owner turned friend of ours.

We are already deep in love with this country.

Next part covers our drive to Kampaeng Phet/ Chiang Mai.

For the longest time of my stay in the US, I waited for an opportunity to visit Niagara Falls. When a friend from Rochester invited me, I gladly jumped at the opportunity. Niagara Falls is accessible (with a valid visa of course) both from the American side, and from the Canadian side. I had to stick to the American side, for the lack of a Canadian visa. I had previously heard everyone tell me how the Canadian view of Niagara was way prettier than then American view. I never understood why.