I read about Jakholi, a small village near Rudraprayag in Uttaranchal, in 2008 in a Travel magazine named “Bhraman” published in Kolkata where I hail from. I have been to Rudraprayag several times and visited some places around it such as Siyalsour and Koteshwer. Kartikswami and Hariyali Devi, also in the surroundings of Rudraprayag, were in my wish list. But somehow we developed an curiosity for Jakholi and wished to visit the place immediately. A long weekend of Dewali was approaching. That time I was recovering from an attack of Hepatitis and was on strict dietary restrictions. But, a call from the Himalayas is irresistible. Instead of Alu Parantha or Khichri with pickles and omlates, my favorite dishes in the hills, Srabani, my wife, suggested me to survive on Fruits, Sattu and Chira with Milk powder. Two other colleagues in office also showed interest and finally a travel party of eight was formed:

We planned to follow the following route- Ghaziabad- Rishikesh- Rudraprayag- Jakholi- Ghansayali- Tehri- Dhanaulti- Dehradun- Roorki- Ghaziabad. GMVN Tourist Rest houses at Jakholi and Dhanaulti were booked and after calling several taxi operators, we finally managed to get one Innova.

I planned to start sharp at 5 am and reach Jakholi in the evening covering a distance of around three hundred and fifty kms in my estimate. However, there were some delays typical to such group outings and we finally headed towards Haridwar at around 6 am. Unfortunately for us, shortly after leaving Meerat, one of the tires punctured and the driver did not know how to replace tires of Innova. As a result of this we lost very precious two hours in the morning. After lunch, we left Rishikesh at 3 pm and started our journey through the hill roads. As usual, the view of Ganges along the Bardinath Highways was extremely refreshing. The air was filled with the aroma of jungles. We took a tea break at a place near Deoprayag. With daylight fading I was getting increasingly doubtful about reaching Jakholi on that very day. While the team maintained a high spirit, exhaustion was creeping in and while crossing Srinagar at 7 pm, I felt that with the driver from plains who is unaware of the route, it will not be safe to reach Jakholi in the darkness which had settled in already. We called it a day at Rudraprayag. Char Dham Yatra was about to close and there were not many tourists and we got a descent accommodation at a private lodge. Our Son, who remained cheerful throughout the day, had fallen sick and was crying. The whole team, ignoring their fatigue remained awake till very late at night and stood by us. At last a dose of Homeopathic medicine from Pishi worked and Om could sleep peacefully. We all went to bed with the hope for a better tomorrow.

When in 1st standard in school, I read Jim Corbett’s “The Man Eating Leopard of Rudraprayag” for the first time. Jim Corbett became my childhood hero like many other kids and Rudraprayag became a dream destination. Leopards, for obvious reasons, may not dare explore the crowded streets of Rudraprayag these days. 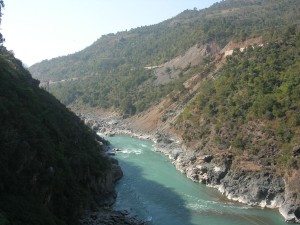 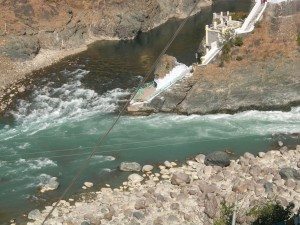 Rudraprayag is now a district head quarter and is an important place on the Char Dham Yatra route. From here, one road goes towards Badrinath and another towards Kedarnath. The main attraction of Rudraprayag is the confluence of the two rivers originating from the high Himalayas: Mandakini from Kedarnath and Alakananda from Badrinath. In Hindu Mythology it is said that at Rudraprayag, Bhagaban Shiva gave new birth to the Ragas and Raginees of our music and Debarshi Narod witnessed the holey event. The eternal music is probably still being played day in and day out at the confluence without interrupt originating from the vibrant and bustling ice cold waters of the two rivers. Near the confluence there is an old hanging bridge (Jhula) which reminds one of Corbett’s stories. We spent good time at the confluence and visited the ancient temples of Rudranath and Narod Jee. Om was doing well and kept all of on our toes.

After having breakfast we started for Jakholi. Around ten km from Rudraprayag, at Tilwara, one has to take the Tehri road heading west. After passing through serene Pine and Cheer forests we reached Mayali, a small village and leaving the Tehri road took a Kachha road to reach Jakholi. Jakholi is a small  village and the GMVN tourist house is located at the top of a hill a kilometer away from the village. 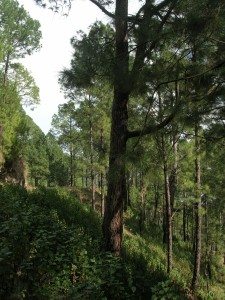 On the way to Jakholi

There is no other house/shop nearby. Silence prevails here which is occasionally interrupted by chirping of birds and sound of the mysterious wind typical in the Himalayas. All four sides around the tourist rest house are open and you can see a vast expanse of mountain landscape all around. I believe the place is at an altitude of around 7000 feets. The coexistence of agricultural fields, forests and villages can be seen all around in the hills and vallies. 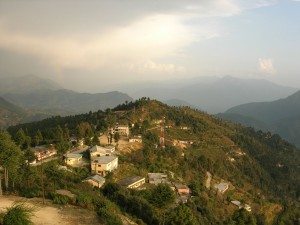 When we reached, the sky was covered with cloud and the preparation of a thunderstorm was on which started shortly then followed by rain. We were enthralled to see two rainbows for a period of half an hour. A chilling wind was blowing at a vehement pace and once I felt that it would pull me out of the ground. 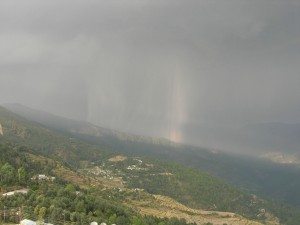 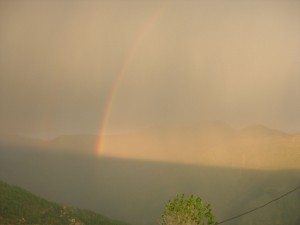 At the closure of the day, the jugalbandi of rain and storm ended and the snow clad peaks of Bandarpunch, Gangotri, Kedarnath, Choukhamba appeared behind the dark forested hills in the north and north-west. Far away towards north- east I could see the great Nanda Devi peak. Nanda Devi did not appear as bold and awe-inspiring as it appeared to me at a place near Bageswer in an early morning during my journey to Munsiyari in October 2006 when I had the opportunity to see her for the first time in my life. Here, in the fading daylight, the summit appeared like a small and beautiful golden crown. I could also spot the “A” shaped great Dhunagiri mountain, Trishul and Mana peaks which appear much closer from Auli. It was an extremely fulfilling experience. 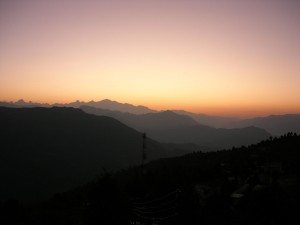 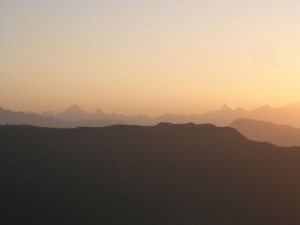 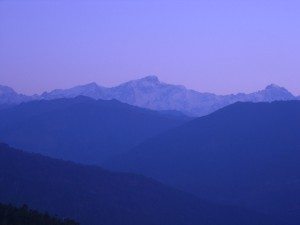 Garhwal range in the early morning

Almost till mid night, we all engaged in a prolonged Adda session and topics of discussion included Silk route and Younghusband, Nandadevi, Rupkund, Jim Corbett, Witchcraft and of course our plan for the next day.

We got up at 5 am and witnessed a memorable sunrise. As the sun shined brighter the color of the mountains changed from Gray to red and then to silver. 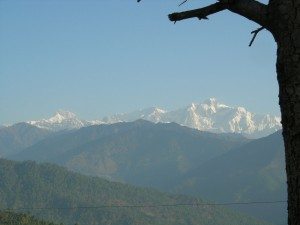 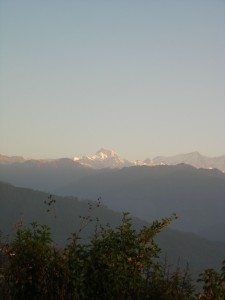 At 7 am we were again on the road on the way to Dhanaulti via Ghansyali and New Tehri. The journey from Jakholi to Ghansyali is simply unforgettable. All along, the road passes through small villages and forests. Shortly after Jakholi, from a small village en route, the towering peaks of Kamet and Choukhamba were seen. I can’t recall seeing the Kamet peaks so close from anywhere else. Pilgrims often follow this route to reach Kedarnath from Gangotri. Since the Char Dham Yatra was about to end for the year, the road was empty. The region was rich in cultivation. We were often accompanied by a beautiful river, I believe it was Bheelangana. Till Gadolia we experienced the orchestra of forested hills and green cultivated lands with the Bheelangana flowing by the side of the road. After Gadolia we met the massive expanse of Tehri Dam encapsulated by green hills all around.

We reached Dhanulti via New Tehri and Chamba in the afternoon. Just before Dhanaulti, from Kaddukhal, the snow range of Gharwal and distant Kumaon were again seen. 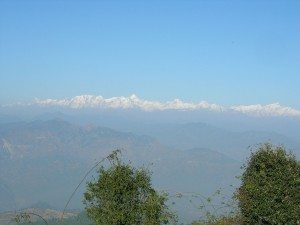 We walked along Mussouri road at Dhanaulti till night. After Dinner, we again started the Adda which lasted even longer this time and one of the topics was where should we plan our next trip. This was the last night of our trip.

Next morning, we drove down to Kaddukhal to trek to the Surkunda Devi temple. But looking at the altitude we gave up. The team rather concentrated on the delicious Puri Bhaji served at a dhaba nearby. While I prepared my humble breakfast of Chira and Milk powder, Srabani and Kaushik finished one after another Puri and continuously teased me. It was the day of Dewali and not much traffic was on the road. From Dhanaulti to Ghaziabad, via Mussori, Dehradun and Roorki, it took only seven hours. We completed the tour under budget and on time with everyone carrying unforgettable memory of the hills.

I wish to visit Jakholi again, but not just for a night this time.

Rahul is from West Bengal. He was exposed to the fun of travel by his parents. He loves nature and enjoys going to Himalayas.