WOW … we had reached our destination … 1200 kms, 3 states, 7 riders … and we were sitting in Mount Abu. The last 1 month, 16th July – 18th August came in a flash, when Ayush sent the first mail, to reaching where we had to. It was an amazing feeling of satisfaction, pride, happiness and achievement.

Personally for me, it was a huge achievement. Who would have thought 4 years ago, when I was bed ridden due to a severe infection in the back bone, and started walking after 1 month with the help of a walker and a Tripod Stick, that in 4 years’ time I would be riding on a Bike, a Royal Enfield for 1200 kms … I was soo elated and proved to myself that Determination and grit can overcome all obstacles, it re-enforced the feeling, that it is never too late in life and you need to bounce back harder when u reach the bottom fast…. Sorry … enough of Gyan … let’s go back to the ride … enough action still awaiting … and as Shahrukh Khan said … we had just reached, we had to return, … “Picture Abhi Baaki hai mere Dost” aur interval ke baad to real action shuru hoga….!!! Abhi tak to Suraj BArjatiya ki Film Chal rahi thi … all good good … Rohit Shetty ki Film to Ab Shuru Hogi … !!! 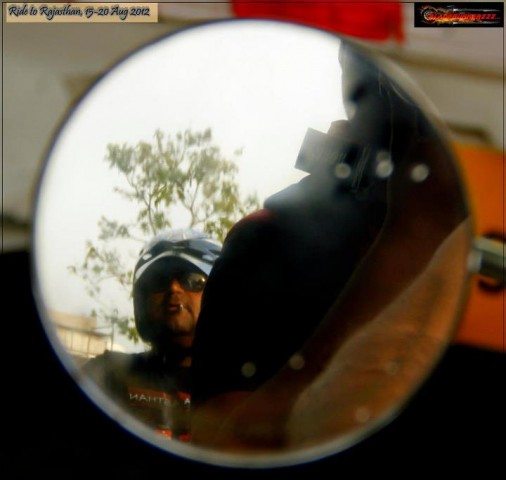 me in Rear view mirror

We were Greeted very well in the resort, with the entire staff an guests wanting to have a lok at the 7 Daredevils, who were riding from Pune to the beautiful Mount Abu, 1200 kms. I want to assume daredevils … they might also be thinking as … “what Jokers … they could have taken a train and bus … why ride … “

But we were quite used to the attention now, we were getting the same attention all through … hmmm… yeah yeah … show off, show off …. !!!

The weather at Mount abu was very pleasant, and the Resort was Beautiful … we decided to catch up on a cup of tea and then leave for sight-seeing, as we just have today and we need to leave tomorrow morning, very early. There was a lot of planning and discussion on the return … but let me take you through Mount Abu right now … !!!! 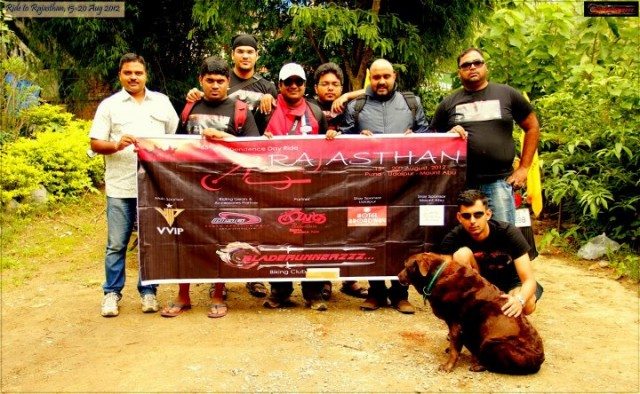 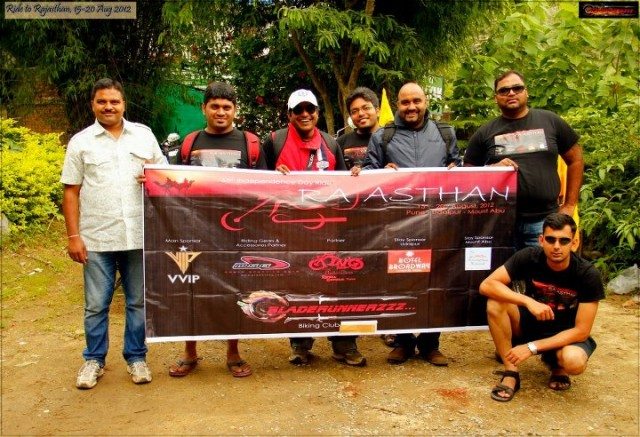 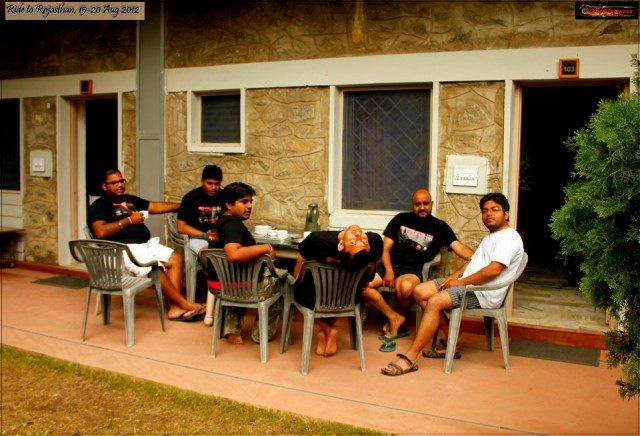 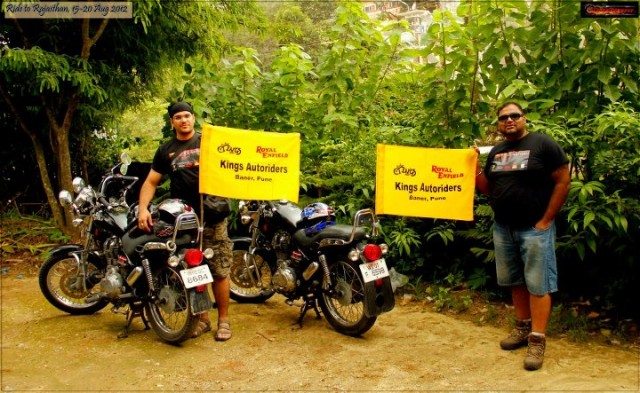 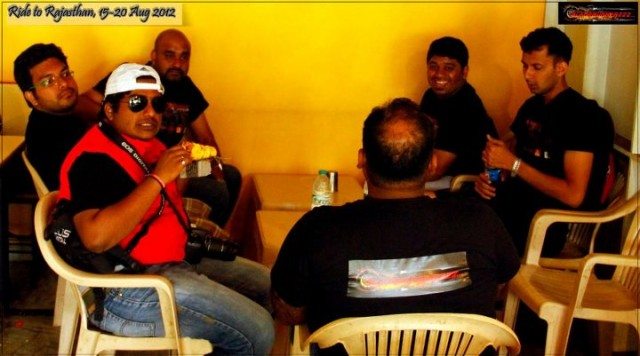 Lunch on the way to Gurushikhar 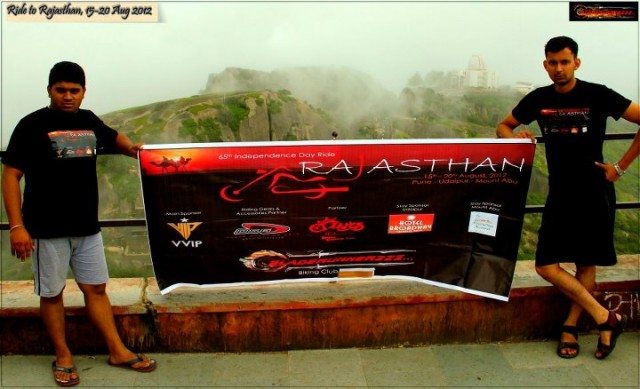 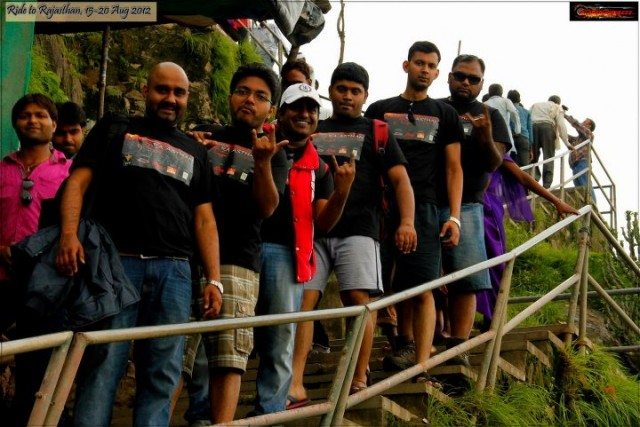 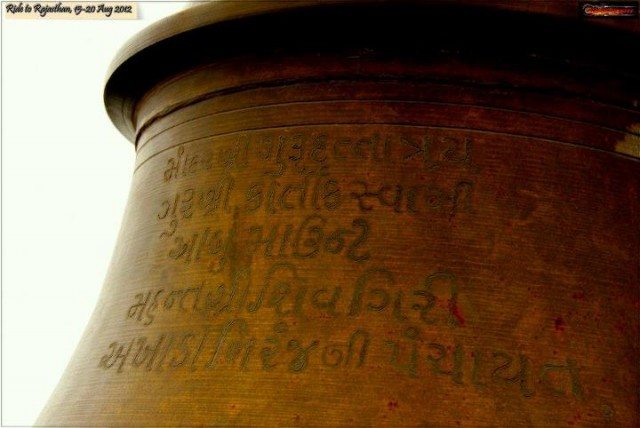 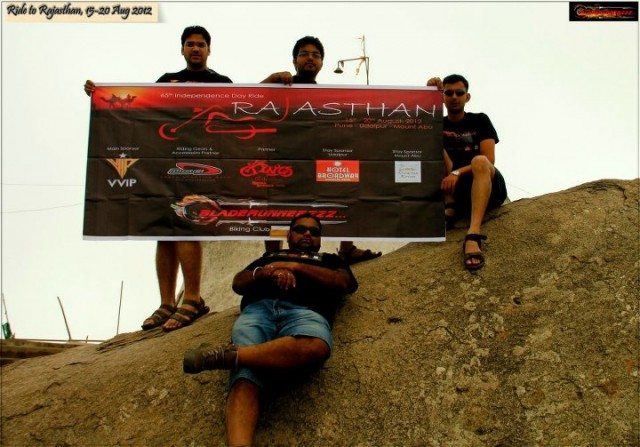 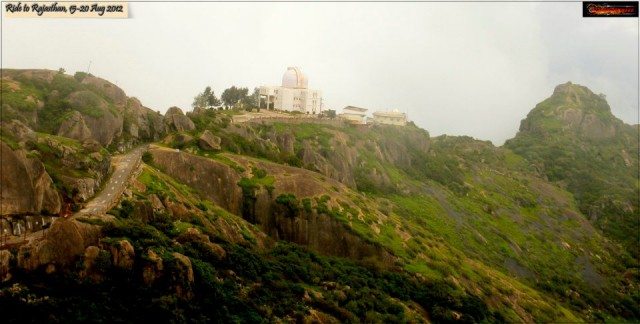 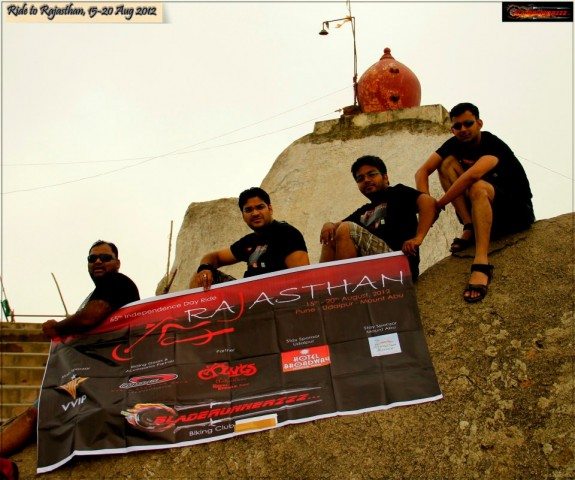 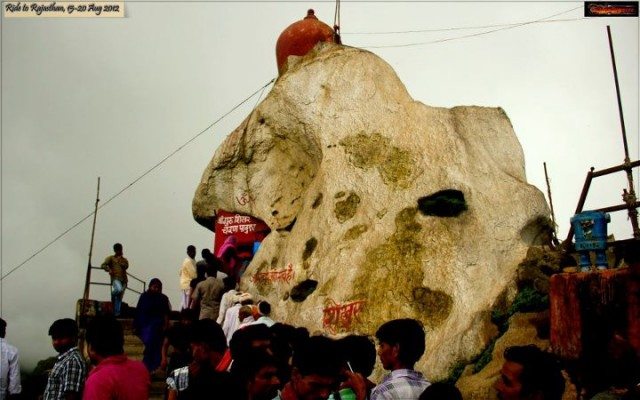 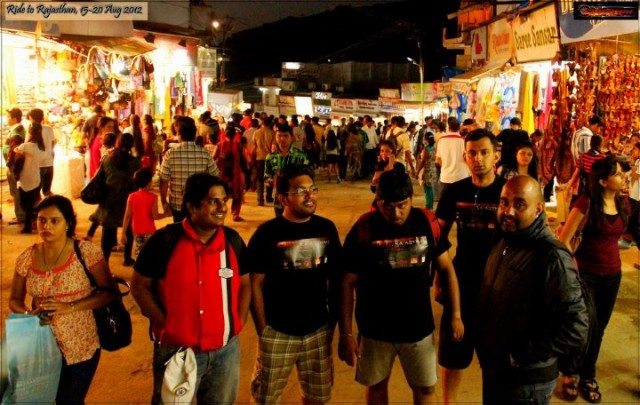 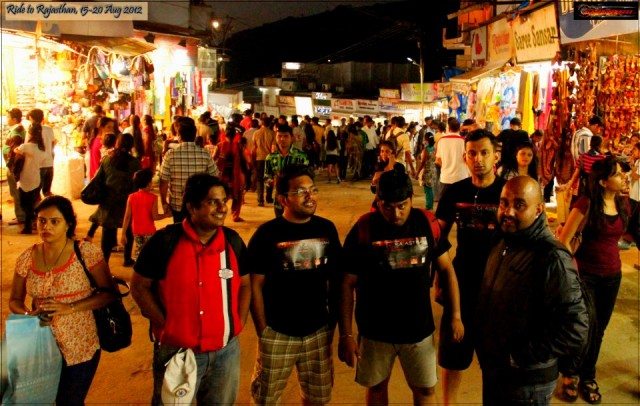 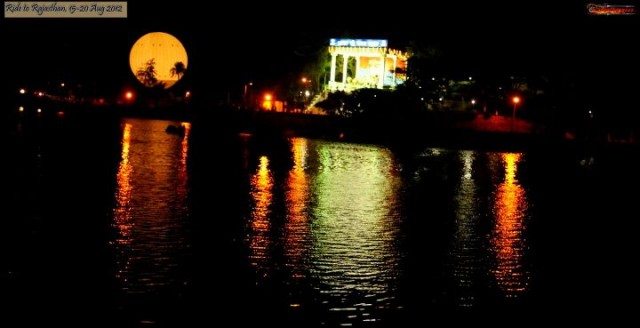 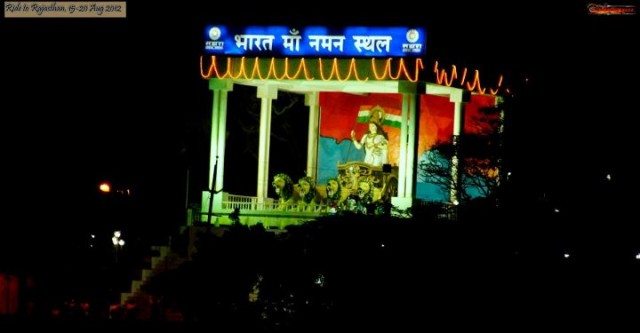 The Day came to an End at the Mount Abu market … there is something so unique about these markets on Small hill stations … the Pop Corn, the Ice Cream Cone, The Corn … yeah … we loved it. The finally came to a close with everyone shopping, that was also amazing fun … Someone from our group had just changed his facebook status from single to committed … and he had to buy something for his girlfriend … and OH MY GOD … Everyone was giving him suggestions … and it was real fun … Ayush had to buy some gifts for his wife, and me too … after 6 days and 2400 kms, if we reach without a gift .. we will be killed. So we finished our shopping around 9:00 pm and headed back to our hotel … we were all hungry and decided to get some food delivered at our resort … where we had to discuss the plan to go back, which was not same as it was while coming … !!!

We had lots and lots of Dinner … and started the discussion in the Cold Night @ mount Abu … !!! here is where the real fun starts …

We had the following options to return:

Now the challenge and discussion: where to halt for the night.

Mount Abu – Ahmedabad was 240 kms and to Vadodara was 350 kms .. the first group had a view that we should halt at Vadodara since it is the second last day of the ride and we are all tired.

Second view was, that we should halt at Surat – 500 kms, so that the last day we do only 430 kms … since we all need to cross Mumbai, and people who have been on Mumbai roads know how much time it may take to cross the city. So we wanted to cover as much distance we can on day-1 of the return journey… but at Midnight, after a long day it was looking quite impossible that everyone would get up early and start to reach Surat by the end of next day, but we have to cover it if we need to reach Pune on 20th evening. So we decided, after discussions again and again, that we will start asap the next morning and try reaching Surat, but we didn’t know what was in store for us the next day.

I am 35, Husband of 1, father of 1 son ... I work for Infosys and am an Avid Traveller. I love travelling on my Royal Enfield Thunderbird ... I visit new places, far off destinations and love the roads and food.