Ranikhet, an endearing hill station, is yet to be invaded by pizza/burger/ice-cream joints. One could rather try out pahadi rajma, meat/ chawal or momo/ chowmein stuff. Sorry!!! It may be a tasteless idea pandering to taste buds in the very opening sentence of a travel piece, but then, isn’t taste-testing an important feature of travel ? :-)

Again, like any good Himalayan destination, don’t expect a stupendous PLACE or POINT really to be covered. Ranikhet is just there, a nice, quiet outpost, for you to relish in its entirety. 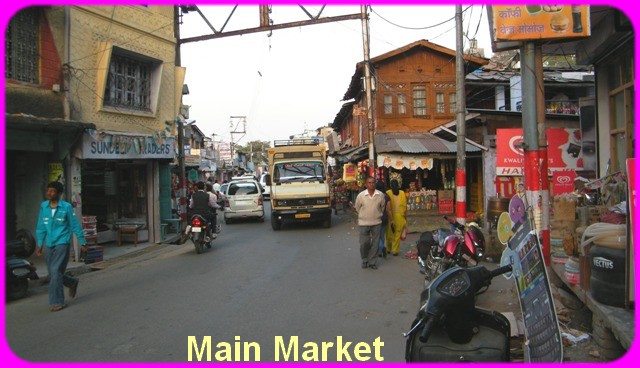 The main market has wide enough roads for you to side your car without having to suffer incessant honks from following vehicles. The bazaar begins with a car parking area (at the Haldwani end), juxtaposed with bus/taxi stand and two petrol pumps. Ideally, one could park the car here and take leisurely stroll through the elaborate bazaar to enjoy the local flavour. This road ends in a bifurcation, well beyond the market area – one proceeding to Majhkhali and other towards Dunagiri/Karnprayag. 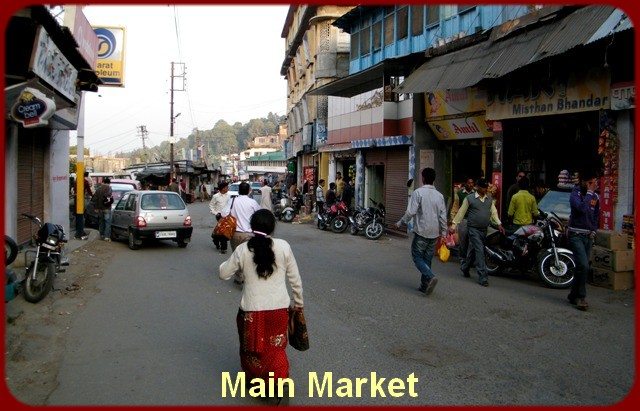 Being a cantt area, it is well laid out with a generally regulated traffic, thus providing you with abundant space physically as well as metaphysically.

Yes, there is a Mall Road, but it is an exclusive affair (in Ranikhet, the action is on main Bazaar, which is on a road running parallel to Mall Road in the lower reaches) – it does not have shops but colonial bungalows.

Drive beyond the Mall Road and you reach Jhula Devi temple. The temple is well revered in the area and boasts of innumerous bells all over the temple, presented by the devotees seeking some or the other gratification from the God. When we saw similar collection of bells in Golu Devta temple in Almora last year, we thought it to be specific to that temple. Now we realize that it is a trend in this part of Kumaon, to present the God/Goddess with bells (size and make of the bells vary, based on economic ability and emotional intensity of the giver). 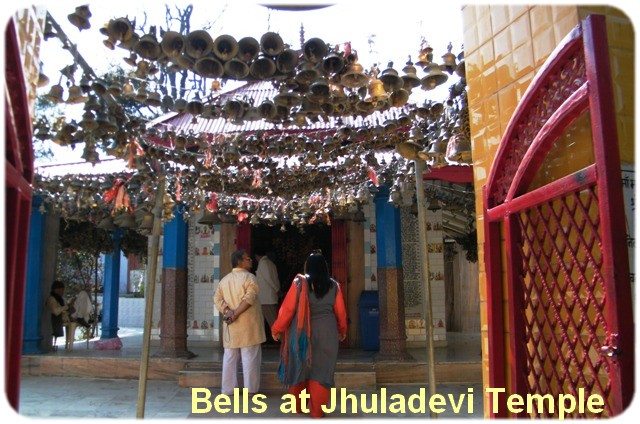 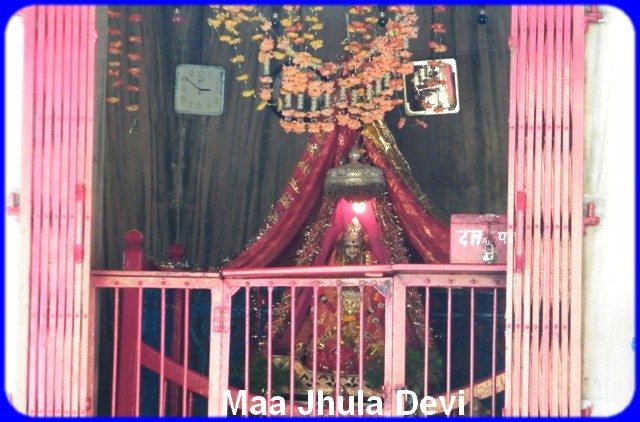 Travel 2.5 kms beyond the Jhula Devi temple to reach this marvelous garden/orchard/nursery run by the government. The place is worth a visit, since it boasts of a large number of trees of various hues and shades. Sample this – the apple orchard here has 167 varieties of apple trees.

You can hire guides, available at the gate, to show you around. There are two main guided visits; first is within the main garden (about half an hour) for Rs 100/- and second being deep forest visit (which takes you inside the forest area, where you are acquainted with varieties of Himalayan herbs and plants; the varieties which have become so popular now-a-days thanks to Baba Ramdev) for perhaps similar amount. 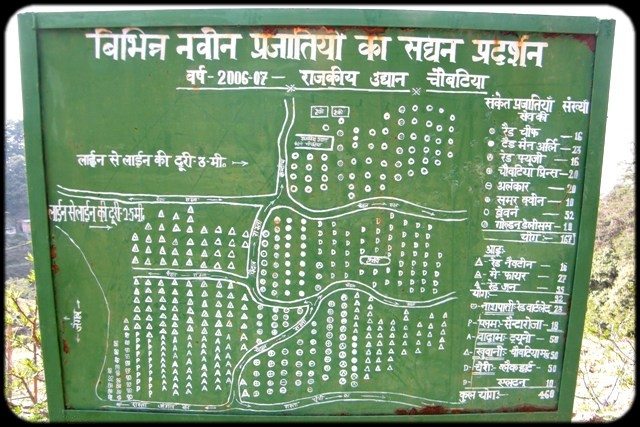 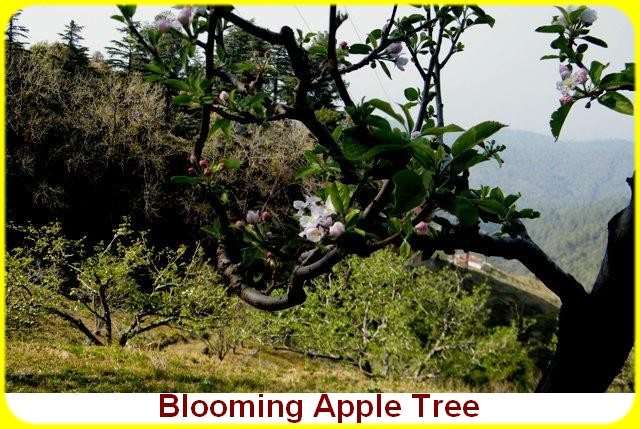 There are two shops inside the garden (both claiming to be Government outlets, which they are probably not) selling various juices/pickles, etc locally produced in nearby villages. They also had the famed rhododendron juice (famous for high medicinal value, especially for sugar/BP related ailments). We picked up a can of rhododendron juice, apart from some pickles etc. No complaints really against these shops, except for the fact of their claim to be Govt outlets. The real Government outlet is located just outside the main entrance – a shady looking, old ration shop-like appearance – sporting a not too keen guy as its brand ambassador-cum-shopkeeper.

It is here that I came to learn closely about nettle (a shrub locally called Bichchoo, meaning scorpion). This shrub, whose crabby-looks perfectly match its wickedness, grows in abundance in this part of Kumaon. We had been watching it all along the area but never thought much of it. Then this guide (not Raju, perhaps Manoj), while taking us around the garden, discreetly enquired whether I knew about a plant called nettle. My ignoramus self taking over the better senses, I coolly replied that I would not really mind trying this out – whatever it is. That’s when he swiped the shrub along my bare left arm (thankfully, it was left) – the mere contact led to a sudden flashing of high voltage bulbs in front of my eyes, number of bulbs equaling the number of cells on my arm which made contact with that plant. Later, Debosh told me that I had actually (as against literally) jumped on the spot. It is no exaggeration when I say that my senses had momentarily left me. It was the most powerful electric shock I had ever received. Soon enough, there were globulous formations on the arm and back of the palm. On recovering my senses, while I was still scheming about appropriate reprisal to this insensitive act of the rogue guide…. he plucked a spinach look-alike leaf from the same spot, crushed it and applied along the offending area of my arm. The effect was instantaneous, at least the immediate effect, since there was a sense of relief – as if someone had poured cool water over a burning part. I was flabbergasted and sensing my mood, the guide plucked a leaf of the nettle and chewed it in a huff claiming that it is not really that dangerous and that locals sometime cook this plant as saag. Then he went on to inform that nettle is a dangerous plant, whose contact with any part of our body leads to the feeling I described above…and it remains for a full day (24 hours), after which it subsides. However, he also told that nature has provided an antidote to this nettle – wherever the nettle grows, you will have this spinach-like small plant growing alongside – so whenever you happen to contact this deadly nettle, look around for the antidote – pluck a leaf and apply it to the affected part of body…… and then, of course, pray non-stop for next 24 hours. 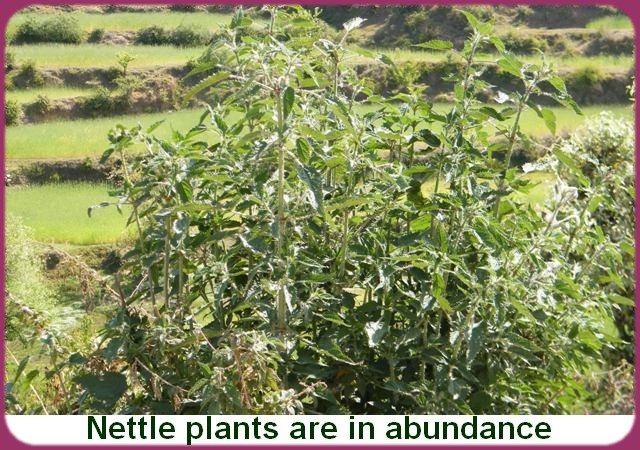 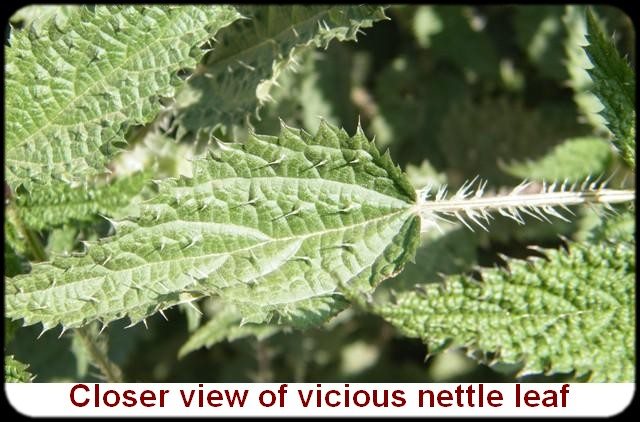 The garden gets filled with all sorts of flowers and plants and shrubs and what not during the season, I was told. It must be a heavenly experience during bloom times.

Ranikhet has been aptly termed as ‘walker’s paradise’ – one needs to put on the walking shoes and start off – direction or destination does not really matter. The main road, on either ends from Sadar, has those benches built all along, making traveling relatively easier and pleasurable.

Weather should be pleasant even in summers since ceiling fans (not to mention air-conditioners) have not yet arrived at this place.

So go ahead, enjoy your summer solitude in Ranikhet. 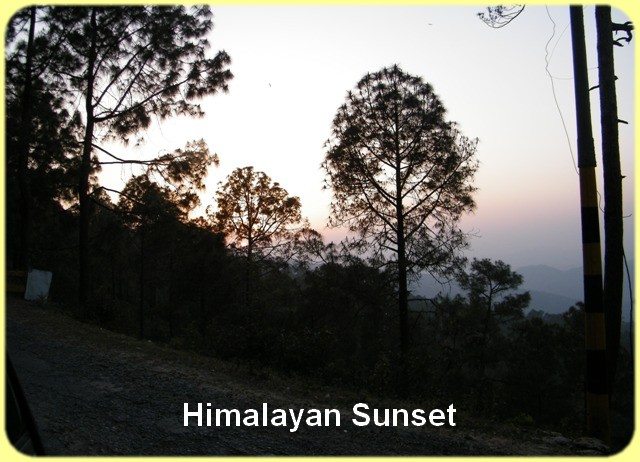 Onto part IV about Kausani….

The room was clean and spacious matching with railway superintendent’s comment. As soon as the kids lied down, they fell asleep. The train finally arrived at mid-night. Luckily, by that time the kids managed to sleep for a while and looked better.