Parasnath Hill, or Shikharji, is a famous Jain pilgrimage site situated in Giridih district in Jharkhand. It lies on NH 2, the Delhi-Kolkata highway in a section called the Grand Trunk road. Shikharji rises to 4,429 feet (1,350 meter) making it the highest mountain in Jharkhand. The pilgrimage to Shikharji is a round trip of 30 km through the Madhuban forest. The section from Gandharva Nala stream to the summit is the most sacred to Jains. The pilgrimage is made on foot or by a doli along a concrete paved track. Along the track are shrines to each of the twenty revered Tirthankaras. There is an option for parikrama of whole Parasnath Hill of 54km. The pathway of parikrama is throughout the forest and is only for walking. 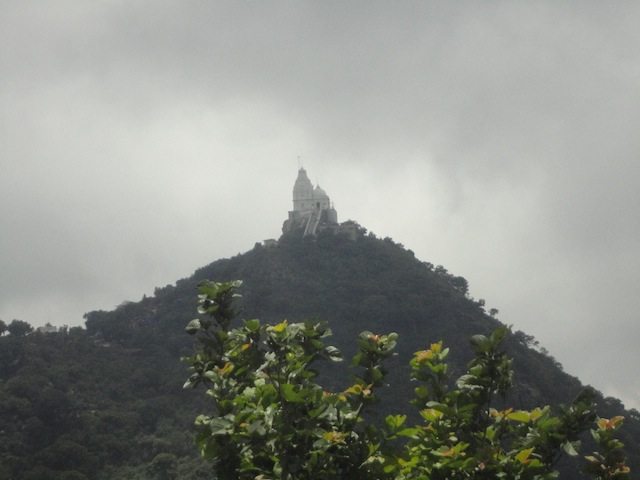 SIGNIFICANCE
Shikharji (Śikharji) means the venerable peak. The site is also called Sammed Śikhar or Sammet Shikhar, meaning the peak of concentration, because it is a place where 20 of 24 Tirthankaras attained a state of mokṣha through meditative concentration. Name of the 20 Tirthankaras who attained moksha here are : Ajitnath, Sambhavnath, Abhinandan prabhu, Sumatinath, Padmprabhu, Suparshwanath, Chandraprabhu, Suvidhinath, Sheetalnath, Shreyansnath, Vimalnath, Anantnath, Dharmnath, Shantinath, Kunthunath, Arnath, Mallinath, Munisuvrat Swami, Neminath and Parshwanath. The word Parasnath is derived from Parshwanatha, the twenty-third Tirthankara of Jains, who also attained nirvana at the site. The earliest reference to Shikharji as a place of pilgrimage is found in the Jñātṛdhārmakātha, one of the twelve core texts of Jainism: at Shikharji, Mallinātha, the nineteenth Jina practiced samadhi. Shikharji is also mentioned in the Pārśvanāthacarita, a twelfth century biography of Pārśva.

It was made accessible since the construction of a road in 1838. Significantly the oldest of the Jain temple appears to date only from AD 1775. Parasnath is the “Marang Buru” or hill deity of the Santhals of Hazaribagh, Manbhum, Bankura and Santhal Parganas. In his book, Mahopadhyaya Lalitprabh Sagar ji described Shikharji as follows: “When just one auspicious event of one Tirthankar can convert a place into a pilgrimage, it will be quite impossible for human intelligence to assess the holiness and power of that pilgrimage where as many as twenty Tirthankars have lit-up the inextinguishable light of nirvana”.

Why I went to Parasnath Hill
For 9 years, I was posted at Santaldih Thermal Power Plant which is situated at Santaldih, a town in Purulia Dist., WB, located near the border of Bengal and Jharkhand. Parasnath Hill is well accessible from Santaldih. The factor of proximity prompted me to cover the famous Jain pilgrimage shrine, which is otherwise a long way from Kolkata. 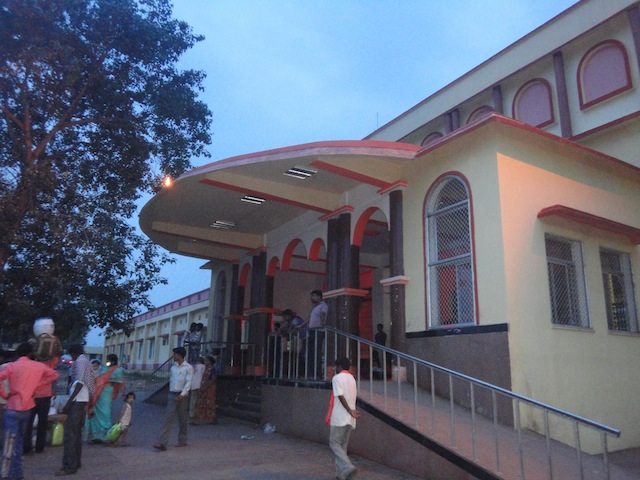 Parasnath railway station is an old one. It was opened in 1906 and electrified in 1961-62. That is why infrastructural facilities are available at this remote place. Just outside the station there was a taxi stand and a rich market. We took a Maruti van for Rs.350/- for going to Niharika lodge at Madhuban. It was a neat and clean modern Jain lodge, under control of Saswat Trust. The journey took apprx. 40 minutes. We had a pre-booked double bed room for 2 nights for a total cost of Rs.1000/- only. Astonishingly cheap. The manager of Niharika Shri Aprameya Pandeya was a helpful person. Since there was no dinning facility at the lodge, we took dinner at a nearby local restaurant. It may be mentioned here that, entire Madhuban town is a complete veg one, you will not find a non-veg restaurant there. 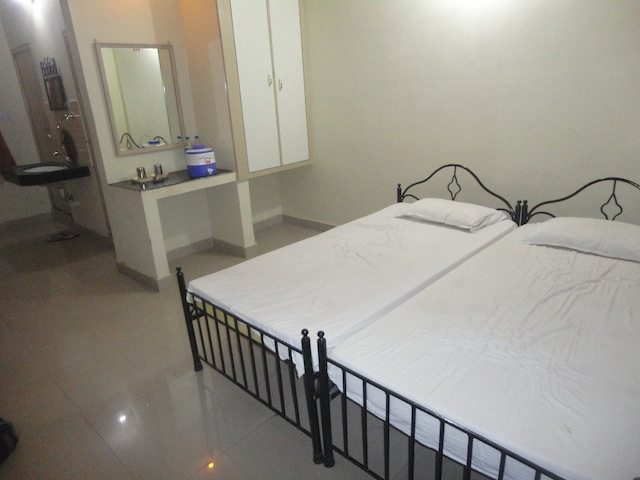 Our room in Niharika Lodge 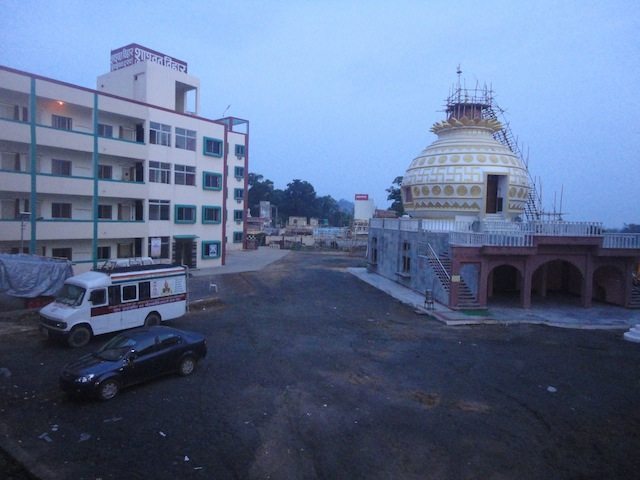 Niharika Lodge with a temple inside the lodge campus

For going upto the top, it takes normally 5 hours covering apprx. 13-14 km through a short route. Niharika staff advised us to start from 3 am in the morning. But we were tired, so we could get up only at 5.30 in the morning of 23rd. June 2013. We saw the sun rise, got ready and took an auto from the gate of the lodge at 6.20 am. It reached us at the starting point of the yatra at 6.25 am. So we started our long walking journey from that point. The walkway was cemented. 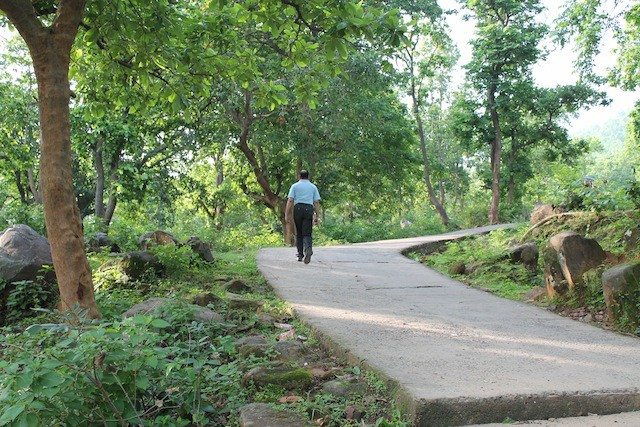 Walking along the lonely way through the jungle

Slowly we were gaining height. We could see the skyline of the city. The way was through natural forest. We carried our rucksack with small quantity of drinking water and pack of cake and cashew. We were of the assumption that lots of snack stall will be available on the way – at least such type of information was available in websites. But we were proved absolutely wrong. Except very few tea stalls and lemon water stalls, nothing more was available throughout the entire journey. 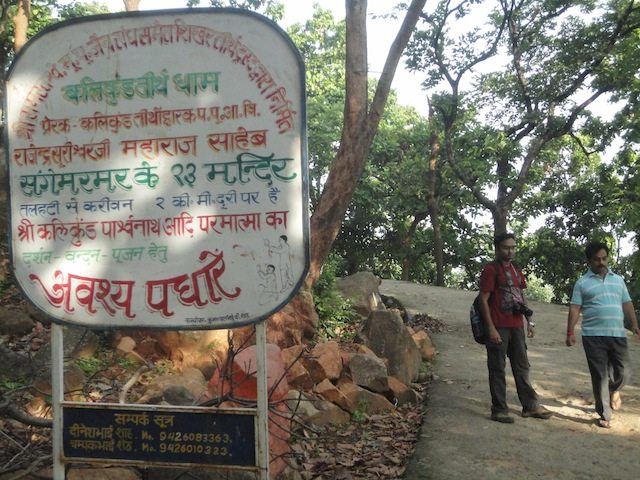 My colleague Rajat watching a Yatri returning from the top. Don’t miss mobile numbers mentioned at the bottom of the roadside board

Later we came to know that during the month of Shravan, such fooding facilities are made available temporarily. However, we noticed with astonishment that, after every 4-5 km, some semi covered hutments were there with laced cots (which are used in villages having local name of Khatiya). Tired yatris used to take rest by sleeping on such cots, which are provided free to the yatris. 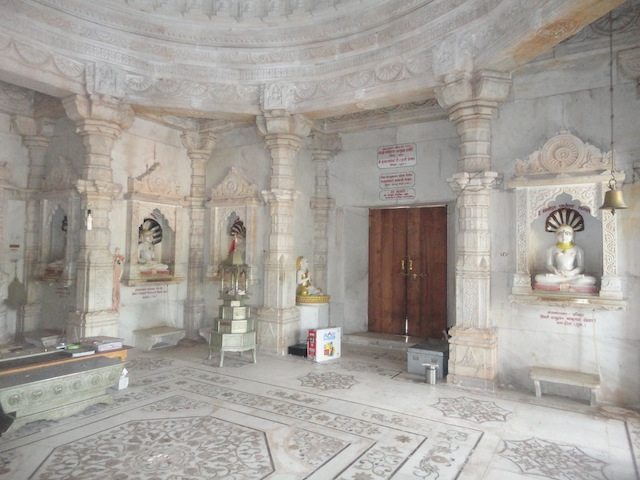 Inside a Jain Temple on way 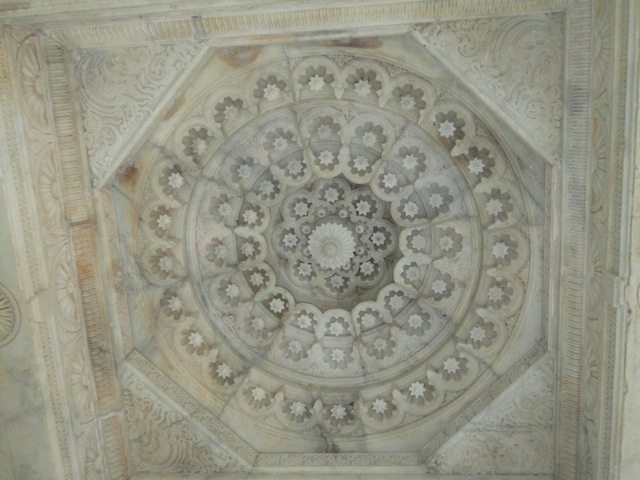 Marvellous marble work in the ceiling

After walking for one and a half hour, we stopped by a roadside tea stall. The stall owner lady was Nimya Devi. On talking to her we came to know that, for running such type of stalls, they come from the ground level. They do business in the hill for some hours and again return to the ground. We had some hot tea and biscuit and again started walking. The road was lonely. 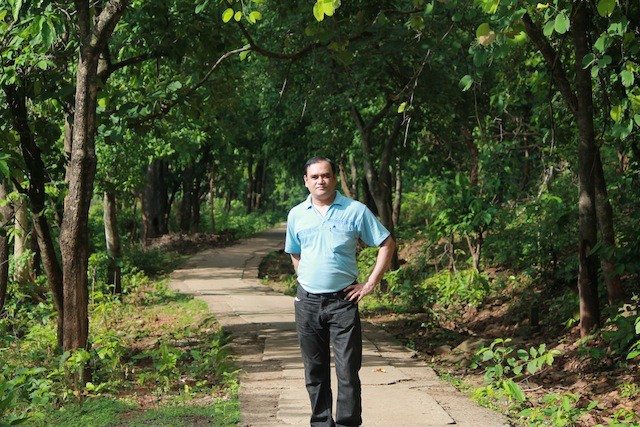 Pausing for a moment

Jungle flower with a majestic hill in the background

Dense trees surrounded the hill. Hardly could we see the sun through the jungle. Weather was very humid. Unknown types of birds were flying around us. When we were passing through a small habitable area, suddenly some aged persons came out. Many hutments were seen here and there with clear marks of poverty. Such poor people asked for money. They were too aged to do any job. What a destiny! We could not understand whether they lived there on their own or they had been dumped at such interior and remote place. We found no answer, gave them some money and marched forward. What an experience that was.

At around 11.30 am, we arrived at a deserted Jain temple situated by the side of road. It was open, but nobody was there. We entered inside, where pictures of many Tirthankaras were hanging from the wall. We visited the temple and surrounding and then we moved towards the top. 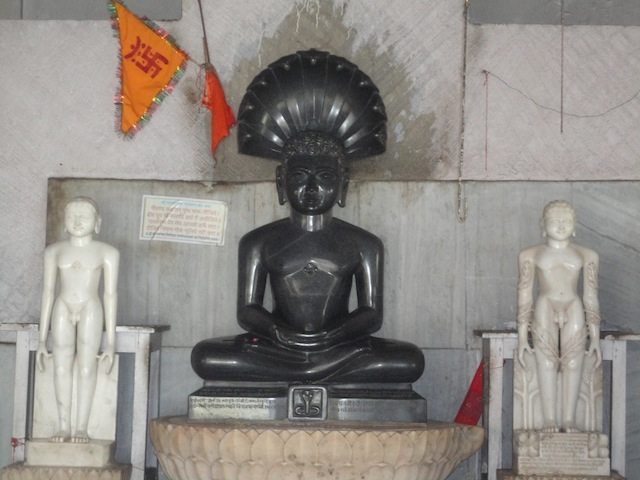 Inside the deserted temple

Pictures of Tirthankaras hanging from wall of the temple

At around 12.15 noon, we reached a flat place on the top of the hill. Though it was not the peak, but the flat area was very wide. From that area, many walkway went towards other adjoining hills. Each walkway ended at a different tonk devoted to a Tirthankar. 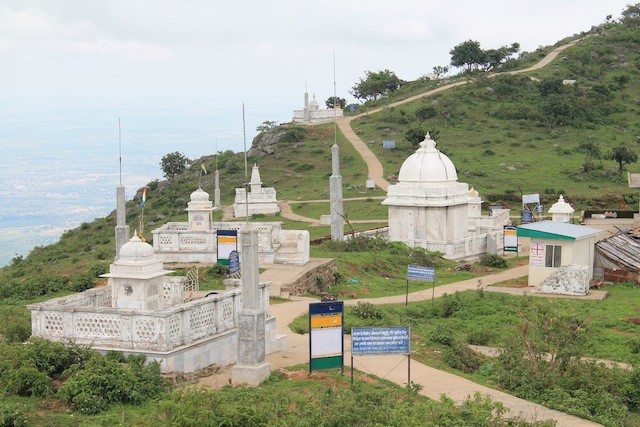 So many Tonks on the hill

A tonk is a small civil structure made of white marble. Inside a tonk there was impression of feet on stone of the Tirthankar after whom the tonk was made. We visited some of the tonks. Each tonk was placed far away from each other situated on different hills. 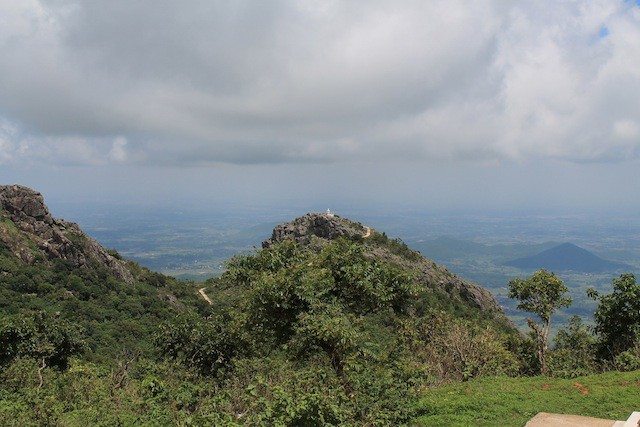 A Tonk on the hill placed far away. Forest of Topchanchi can be seen behind the hill

So one needs time, physical fitness and abundant energy to cover all the tonks, after covering apprx 12 km of ascending distance from ground level. From here we had the first view of the main Parasnath temple. 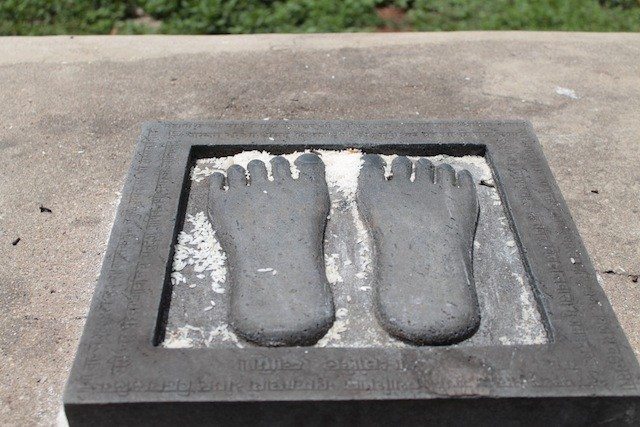 Impression of feet in a Tonk

There was another famous temple called Jal Mandir. It was a complete white-marbled temple. 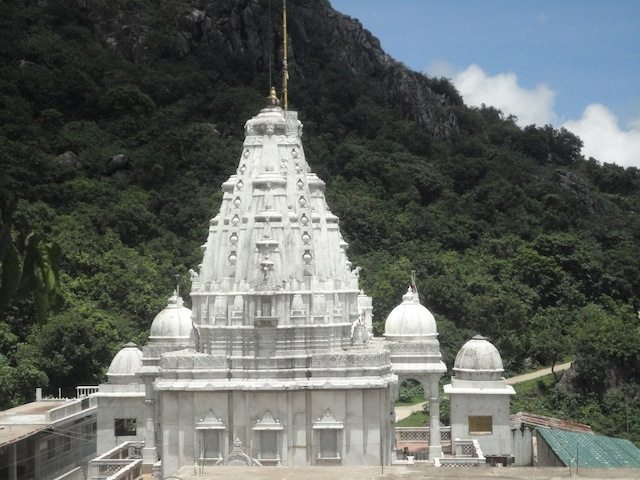 A statue of Tirthankar inside Jal Mandir 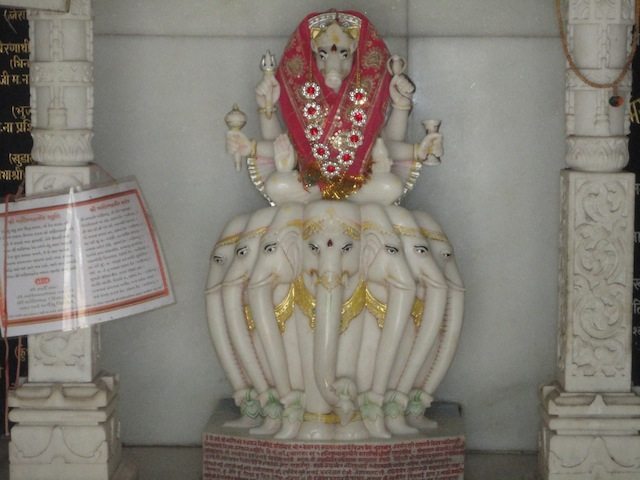 Idol of God inside Jal Mandir

There were idols of tirthankaras and other gods inside the temple. Provision for taking food was also available at a bhawan adjacent to the main temple. We observed with much appreciation that each Jain temple was very neat and clean. 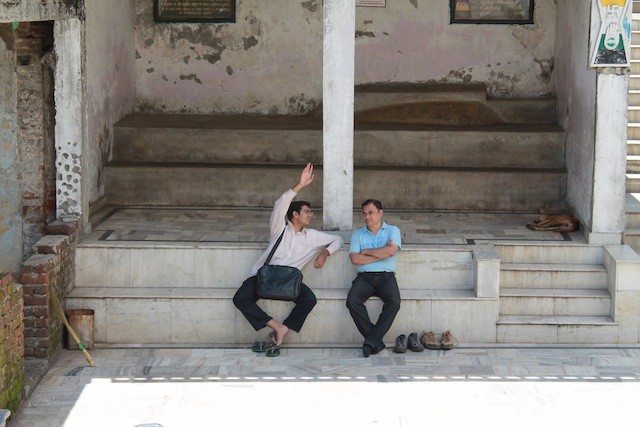 Listening to a Jain Yatri. I have a reputation of being a good listener

Then we progressed towards the main attraction, the Parasnath temple. Please read the next part of the travelogue, soon.

Parasnath Hill – the revered pilgrimage of Shikharji in Giridih was last modified: February 12th, 2022 by SANTANU

Our family has a tradition of visiting Baba Balaknath Shrine in Himachal every year. Usually we drive down to the temple during the summer…