On one cool morning last year, we some of the members of Marthoma Church, Karimba, gathered at the Parsonage. After coffee at 6 am we started for Palayur (an important pilgrimage center of Syrian Christians) in a hired Bus. Shortly before 8 am we reached, as planned, at the Ravi Varma orphanage at Trichur run by our church. We had free breakfast with the inmates, wash our plates ourselves and gave donations to the institution. And go around and saw the institution and talked to some of the inmates. 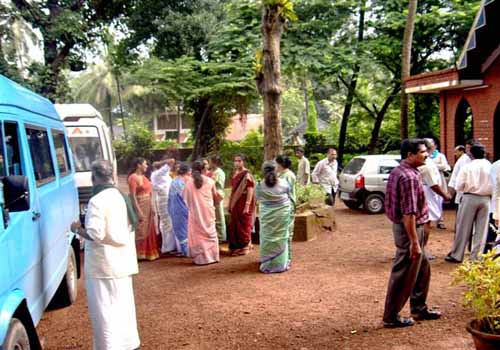 How to reach Palayur?
Palayur is a part of Trichur District and is located on the west Cost of Kerala. By road it takes 28 Km to reach Palayur from Trichur. It is on Trichur – Chavakkad route, via Pavaratty. To travel by train catch Trichur – Guruvayur train (24 Km). From Guruvayur to Palayur take a bus or a taxi/auto rickshaw (2 Km). Nedumbasserry International Airport is only 80 Km from Palayur.

We then started to see many ancient churches on our way to Guruvayur where we had Lunch at another old age home run by our Church. Here I had talked to some of the inmates who expressed their anguish at their children leaving them to this old age home, while they long to be with their children and grand children as it was in their younger days. (Money is not what they expect from their Children). I then decided that it will be better to be in the jungle of concrete in Delhi along with my children than in the God’s own Country. Soon Kerala will become a geriatric asylum as the youngsters will leave Kerala. 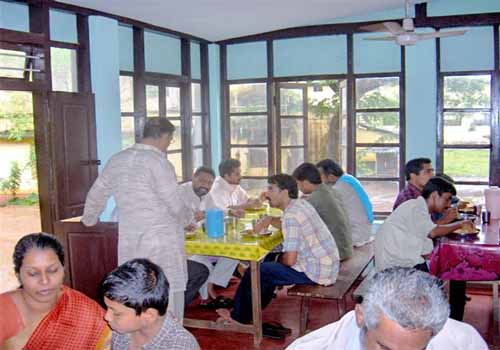 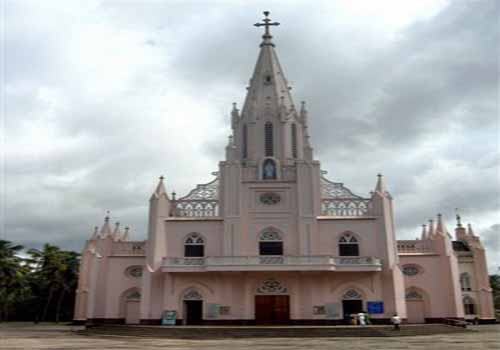 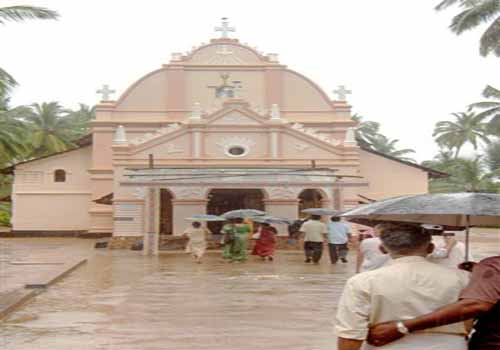 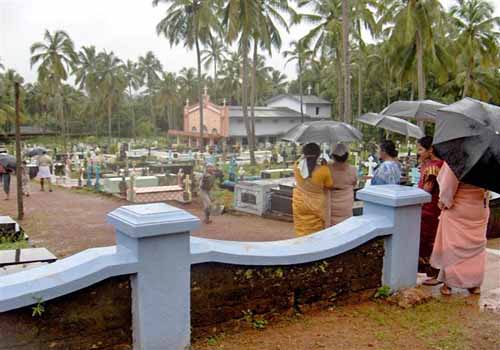 Before I Go to Palayur let me tell the story of Syrian Christians of Kerala.

Syrian Christians are not a particular Christian Denomination. It is a high cast name for all Christians now found in many Kerala denominations who claim their origin to Brahmins converted by St. Thomas and later intermarried with the Christian families migrated from Palestine etc. They were known as Nazraneys (ey pronounced like money) to the local people, and to the out side world as St. Thomas Christians. Only after the arrival of Portuguese they are known as Syrian Christians.

Throughout Kerala, one can find Christian families that claim their descent from Brahmin ancestors who were baptized by Apostle Thomas. St. Thomas Christians were classified into the caste system according to their professions, in accordance with the Hindu tradition, with special privileges for trade granted by the benevolent kings who ruled the area. Syrian Christians had a king of their own. After the eighth century when Hindu Kingdoms came to sway, Christians were expected to strictly abide by stringent rules pertaining to caste and religion. This became a matter of survival. This is why St. Thomas Christians had such a strong sense of caste and tradition. Local rulers had given them 172 special privileges including right to own Slaves; right to have special architecture for their houses, right to use 2 Plantain leaves at public feast, use of Palanquin etc.

Thus, Most of the Kerala Churches are Hindu in culture, Christian in religion, and Judeo-Syro-Oriental in worship.

History
Even before Christian era, Arabs had trade with Kerala for spices mainly Pepper, Ivory and sandal wood. Even King Solomon got wood from Kerala for making the first Jewish temple. Many Jews settled in Kochi and Palayur before St. Thomas came to Kerala in AD 52.

It is believed that St. Thomas came in one of the boats with the trading Jews.

Christianity in India
It was one of the early eastward movements that first brought Christianity to India. According to tradition it was brought in the first century by one of the twelve apostles, St. Thomas. This has been the constant tradition of the Syrian Christians of Malabar, and it has been widely believed in the West also that this apostle’s sphere of work was in India.

The Tradition
Palayur was the stronghold of the Namboodiri Brahmins (the super class people in Indian communities). When St. Thomas arrived from Kodungallur, Israelites had a settlement at Palayur, two thousand years ago. Ruins of an ancient Jewish Synagogue are still seen outside of a Brahmin temple about a furlong away from the Church.
“When Thomas came to the great Brahmin centre of Palayur, a leading Brahmin Gramam (Village) among the 64, he came across some Brahmins doing the Pithru Yajna or Pooja to the manes or ghosts of deceased ancestors. They were throwing water into the air (Tharpan) while reciting manthras. The Apostle learned from them the meaning of this ritual and remarked: ‘If your performance is acceptable to the gods they could keep the water suspended in the air without allowing it to fall again and again’. “The Brahmins said that this was unthinkable as it was opposed to the laws of nature. Then Thomas asserted that the One true God he worshipped could do it, and he proceeded to perform a miracle on condition that the Brahmins accept his faith if he is successful. The Apostle, invoking the Holy Trinity, made the sign of the Cross and threw a handful of water up into the sky. After reaching a particular height the water stood still in the air, the particles glittering like diamonds. Looking down the Brahmins could see the cavity made by the removal of the water still there in the pond. Most of the witnesses were baptised on the spot. However those Brahmins who did not accept the faith called the place ‘Shapa Kadu’ or Cursed Place and left the place immediately promising to take the next bath only at Vembanattu, unpolluted by the new faith. Even today, true to the oath taken by their ancestors, the Brahmins do not eat or drink in the vicinity of Palayur or Chowghat (Shapa Kadu).” Palayur church is one of the seven churches established by St. Thomas in Kerala.
Subsequently a series of Migration took place by Christians of Palestine Syria etc. At first Nazraneys do not intermarry with tem, but later intermarried with them.

The following pictures are taken from the compound of Palayur Church depicting the Story of St. Thomas and his Martyrdom at Mylapore in madras. The church was a temple before St. Thomas Converted the Brahmins. The oil lamp used in the temple is still there. Tippu sultan burned down this church. But later it is reconstructed with the Persian cross established by St. Thomas and the oil lamps of the temple. 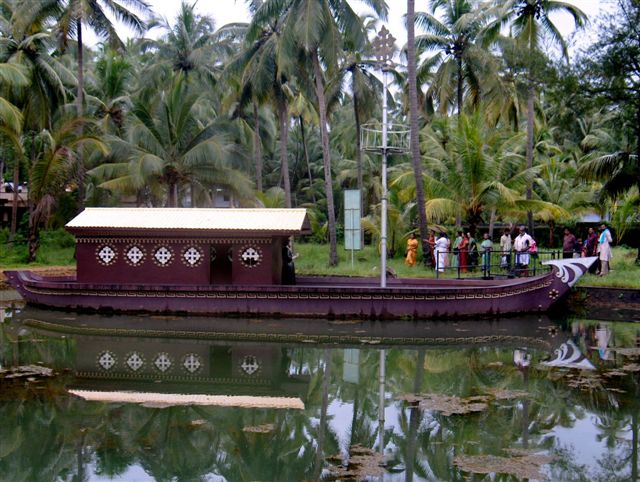 Kind of boat in which st. Thomas came to Kerala 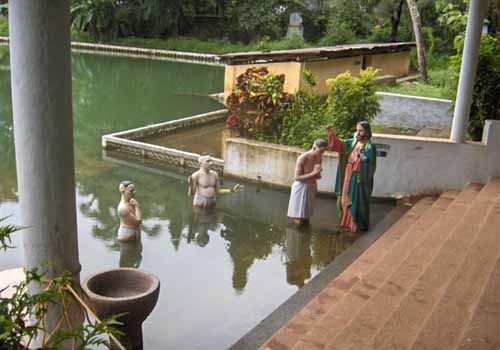 This pond and statues at the Palayur church represent St. Thomas baptizing the Brahmins 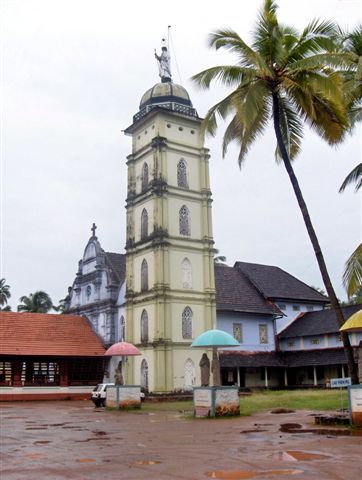 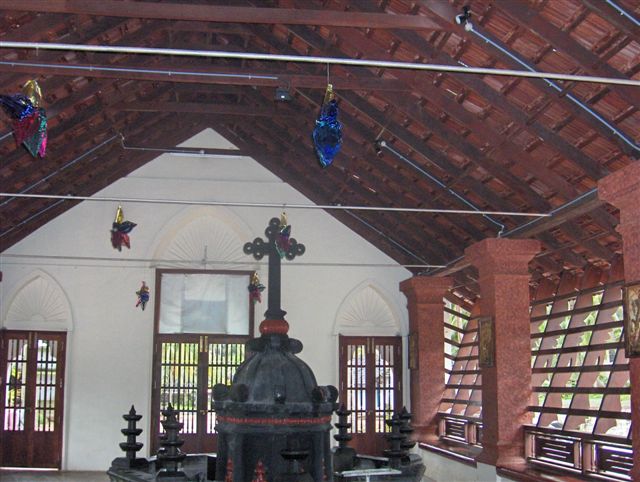 The Persian Cross planted by St. Thomas and the Oil lamps used in the Temple 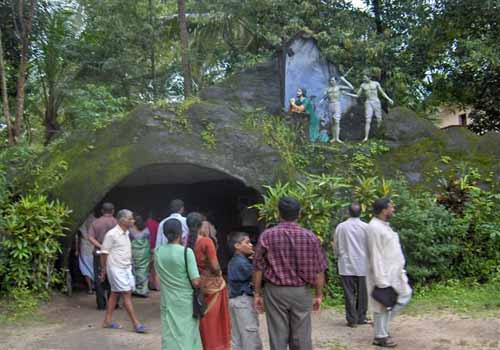 Till 16th century the Syrian Christians were not fully aware of the Bible and the Christian Theology. They were following the Mesopotamian liturgy (Worship order or Chanting) in Syriac language understood only to a few. Following some rituals of the Eastern Churches of Mesopotamia. (Not Roman Catholic rituals as in Rome)

They follow many Hindu rituals like Shaving head and keeping a tuft of hair in the middle, applying Sandal wood paste on Forehead and on arms and Chest like Brahmins. They also worship their own deity in the form of Idols. In marriage, they tie a mangal sutra by the groom to the brid’s neck.

When Portuguese came to Kerala they saw these strange Christians and wanted to make them civilized like the Catholics. By using Bribes to leaders, using force and frightening the local king, they succeeded in convening a Conference by all bishops and lay representatives and made to follow the Catholic rituals and Liturgy. In effect all were made Catholic for about 50 years. In the conference they burned most of our old liturgy and other historical records.

Their bishop who came from Mesopotamia was put to jail by Portugese. There was a big protest by many to release him. But Portugese turn their canon on them so they have to retreat and make a vow that they have nothing to do with Rome. So the new denomination came to be known as Jacobites. Later when British came and started printing Bible and started teaching bible, Marthoma Church also separated from them.

Now in fact Hindus, Christians and Muslims in Kerala are culturally alike and so there is no communal trouble in Kerala. Each community influences the others. There are innumerable stories and traditions that this space is not sufficient to include all. Before I finish I am giving two more photos showing a Syrian Christian (or Nazraney) dance form called Margam Kali and elephants of Guruvayur. 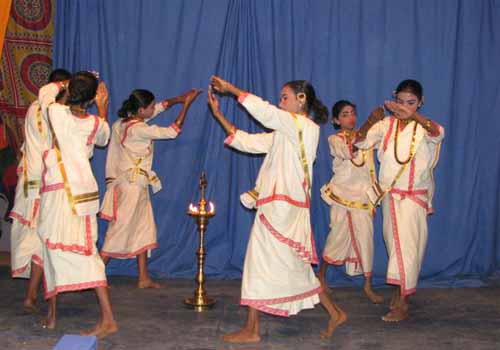 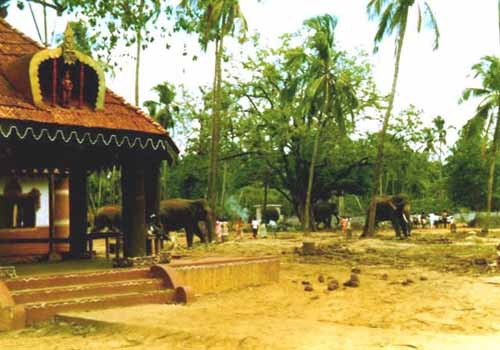 After visiting the Chavakkad beach nearby we returned home. While returning we saw the Elephant keeping yard of the Famous Guruvayur Temple where more than hundred Elephants are maintained for the temple. It was a very thrilling experience.

Palayur and the Story of Syrian Christians was last modified: July 24th, 2019 by Philip Mathai

After the darshan we immediately went to the rear side of the temple to see the ‘Bhimshila’, the miracle boulder that was perched at the boundary of the temple and had supposedly diverted the mud flow from damaging the temple. It really seemed to be a true act of God. The path the mud flow had taken from Gandhi tal, whose walls had ruptured leading to the floods, were clearly visible.