Akshay & I headed excitedly for the Nizamuddin Station for our 5 day MP trip, anxiously waiting for Kapil to arrive from Punjab and join us. To our relief he joined us on time to board our train to Bhopal. Our journey had begun!! 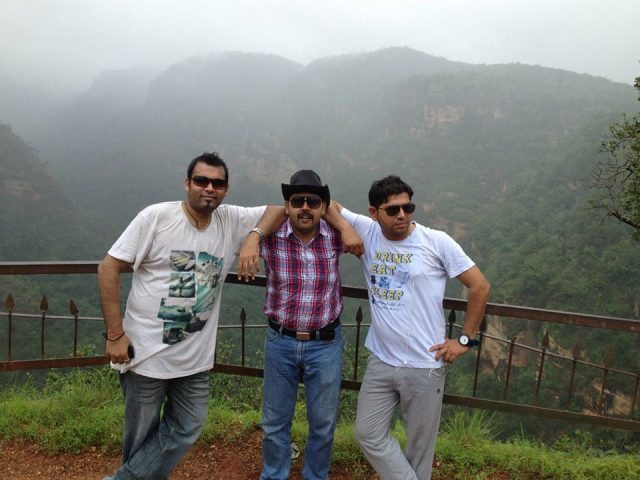 Bhopal welcomed with its signature breakfast “Poha” after which we continued our Journey to Panchmarhi by road. Enroute we admired Bhopal for its verdant, exquisitely laid out parks & wide avenues and roads. However someway down the road our drive became bumpy and was no longer fun. The rains had damaged the roads leading to traffic jams and lot of potholes. Though the Enroute small hills, water streams running parallel to roads kept us engaged, we somewhat regretted choosing road. We reached the outskirts of Panchmarhi. & drove through dense jungle on both sides offering breath-taking views & calm that enthralled us completely.

The entire journey took 5-6 hrs instead of 2-3 as promised by driver and it was evening when the Beautiful Panchmarhi greeted us. The entrance was covered with dense fog & crowded with devotees from Maharashtra going to Dhoopgarh for a pilgrimage tour. This holy journey covers dense jungle, ponds & hills and as per locals is even tougher than Amarnath yatra. We reached our hotel and to our surprise were checked into a honeymoon suite, painted in bright red & pink with a heart shaped bed! However all this at a Tariff of Re. 1,500, who were we to complain? So after taking some rest and strolling the market where Maharashtrian thali was the most sought option we retired to our hotel. 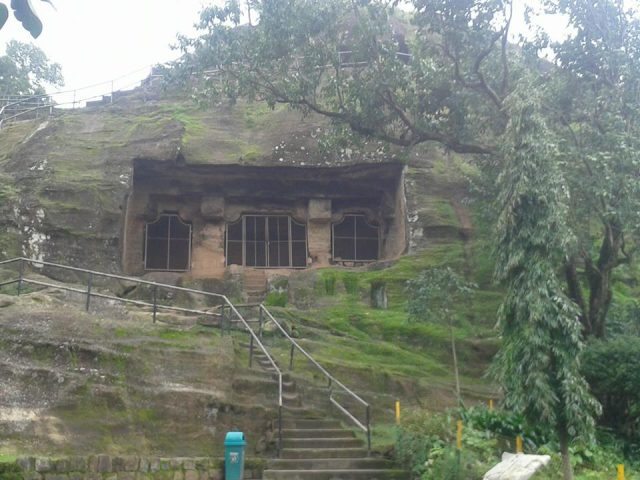 Next day the much awaited Panchmarhi tour started on hired jeep. First on the list was Pandava Caves & our guide Mr. Tiwari from the Govt. Tourist centre shared with us the legend of the 5 ancient dwelling made of sandstone rock, having provided sanctuary to the Pandava’s during exile &, how the city got its Name. The 5 caves are carved out of a big mountain standing out in middle of the beautiful landscape. The Panoramic view during climb to this steep but stairs equipped site was spectacular. You can see very far from top & it was worth the climb and we admired the splendid 360 degree views. Rains welcomed us like a prize on reaching top & a few minutes in to this we decided we had enough and ran to our jeep.

View from Top of Caves 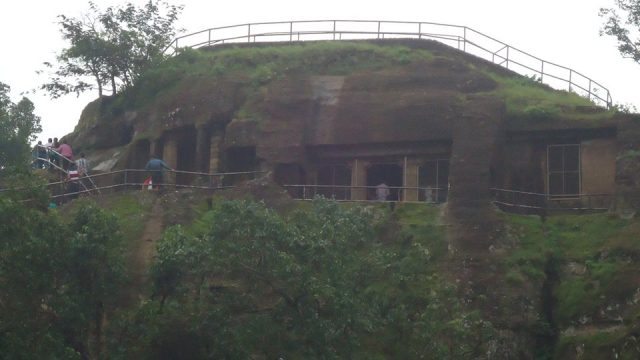 We then proceeded to the dense Satpura jungles and once the jeep stopped Mr. Tiwari was in his best form explaining about the place. We were regaled with the facts & stories about the jungle while we covered the 1.2 km walk through the forest, hills, stones, trees, shrubs, small waterfalls.

One of the gorgeous stream

The poet in me recited lines from the poems of Hindi Poet Bhavani Prasad Mishra “Satpura ke Ghane Jangal neend mein Khoye hue se, Unghte Anmane Jangal , Jhaad uche or neeche chup khade hai aakh meenche. By the end of trip both of my friends were able to recite those lines as well and I wondered how? We were fed with stories of leopards & tigers & last fortnight tiger attack. While the thought of sharing space with man-eaters left us edgy, it couldn’t dampen our high spirits. We moved further & reached Pandav kund – group of 6 small natural ponds, which could have worked just fine for the 5 Pandavas and Draupadi.

The entire site was presenting a very nice and fresh view. The alternate name of site “Apsara Vihar” was given as in Pre –Independence time the British women used to swim here and used the site for picnic. The Native tribals on seeing them used to think that they are fairies, hence the alternate name. While we indulged in photography, Kapil had a sudden urge to take a bath in pond. While he tried unsuccessful swimming we just sat there and enjoyed the quietness & serenity of the place. 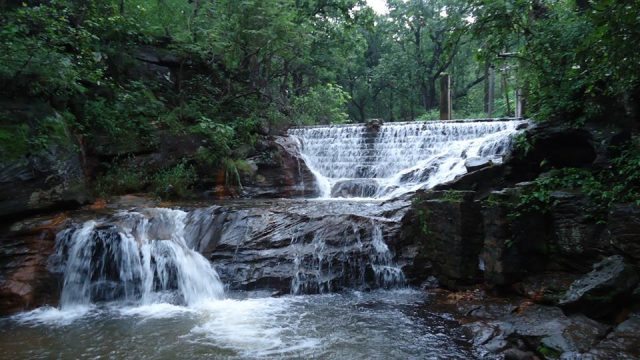 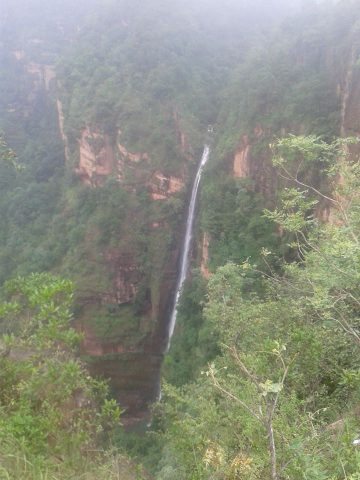 Next on itinerary was Rajat Prapat, a horsetail type waterfall with a single drop of 351 Ft. Watching the waterfall like a sheet of silver as the sunlight falls on it, it is not just a thrilling experience but also a visual delight! The gurgling water as it cascades down is music to the ears! The fall passes through a deep Green Valley, which is out of bound to visitors so you just have to watch from a distance. In the surrounding valley we saw the incredible view of Clouds hovering just below & above the valley, moving slowly & giving us fantastic life time moments. The sound of the fall was audible despite being a good distance. We kept admiring the place, capturing those views, moments through lens and in our mind. 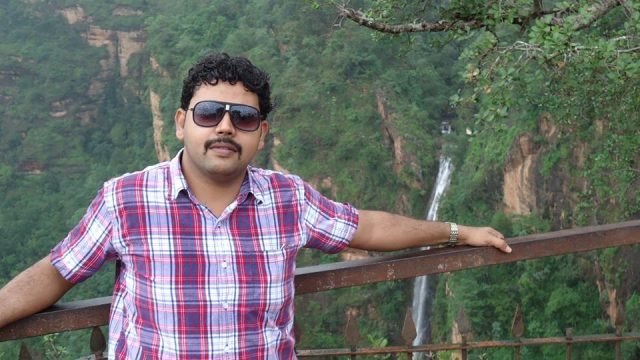 We headed to our Jeep which dropped us at a site & after 1 km of trekking we reached an open spot, from where the Lush Green Valley was visible. It was around 3 pm and Tiwariji instructed us that we have to go down the Gorge, which is a 500 Mtr. Journey to bottom of Valley to find waterfall. The trek, I must say passed through such thick greenery and vegetation which I had never seen in my life & , I was forced to wonder if it’s real? After 15min of climb down we were greeted with another Spectacular view this time of Bee Falls. The water from fall while coming down strikes the rocks and breaks into millions of droplets which falls in the gorge & in sunny day’s gives impressions like thousands of bees. While Akki decided to be a view admirer and our Camera operative me & kapil went in to take bath.

We enjoyed a lot & moved in till we were right under those splashing down water cannons. The water impact was bearable and it felt like some therapist massaging our back. We kept exploring more points & had the most amazing & freshest bath of our life. Sun descending on us & the 4 pm deadline in consideration, we bid adieu to our Natural showers. More stories were served along with hot tea by the Vendor whose shop was washed away during monsoon rains which fills the entire gorge, we were thrilled to imagine what scene it would have been.

Bidding Adieu we made a tedious journey back up the gorge & as expected the return journey was difficult due to height of steps. With and darkness descending, the valley was looking stunning and the silence & calmness of the place was incomparable. We moved on and although we missed our 4 pm deadline tiwariji didn’t mind. Rain gods again decided to play hide & seek and we called it a day and sat down to have lunch at the canteen operated by Army. With rain & monkeys for company our meal was a unique experience. The day’s adventure left us tired and then the rain forced us to remain indoors that evening. 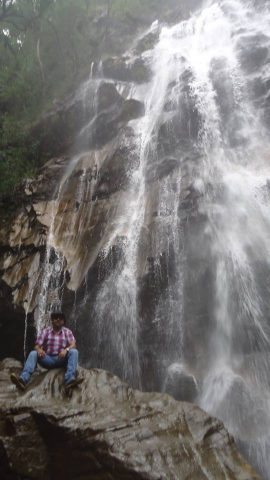 Below the Bee Falls 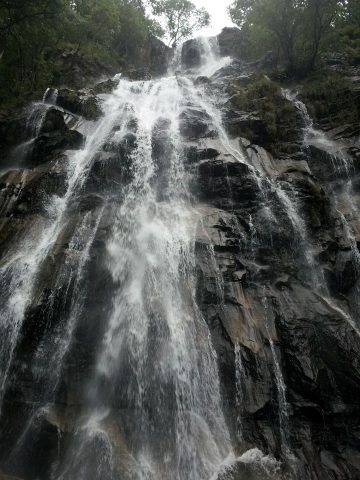 Next morning clad in raincoats we started off for Handi-Koh an imposing canyon with 400 ft high Craig amidst a dense forest endowed with unique scenic beauty. The vegetation was so thick that even the bottom of valley was not visible. The place carried many stories with one told by our guide that a British officer Handi riding a horse had fallen into valley when he couldn’t see the dense fog, but I overheard another Guide that he committed suicide riding his motorbike into the craig and as it’s so deep and dark even his remains couldn’t be retrieved.

Near to this site was Indira Point were then PM Indira Gandhi had visited and the place got famous after her. But due to Rain we couldn’t see much but got an idea that on a clear day with good visibility the spot would have given any other spot a run for its money. The green valley point seemed like a repetition of the Indira Point with site overlooking the Green Valley and producing a nice fresh view of lush green forest. 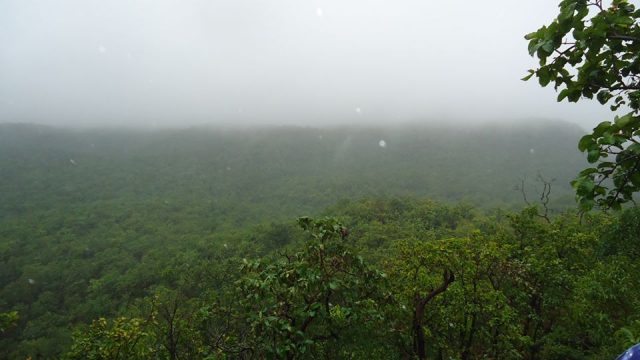 Being last day we wanted to make most of it and decided to cover Gupt Mahadev Temple as well. The route was a lil tough and by the time we covered muddy potholes, small ponds braving the heavy rains we were completely drenched. I don’t know what kept us going in such testing conditions the faith or the thrill factor but we covered the 2 km Trek without any complaints. The cave path is so narrow that only 1 person walking sidewise can pass it with group of 10 people allowed at a time. The 100 Ft narrow passage opens into a sanctum where the Idols of shiva and Shivlinga were present. So the place was definitely not for claustrophobics but the beliefs of people kind of overpowered this fact. 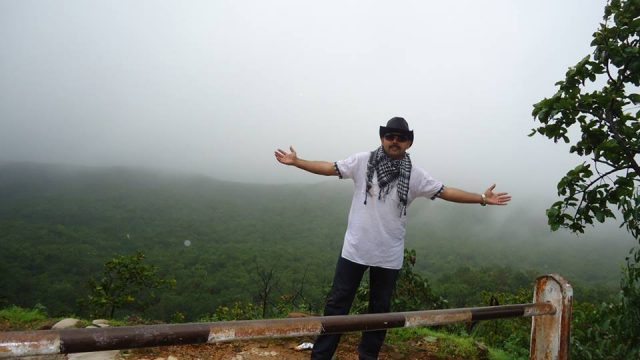 Nearby was Bada Mahadev Temple which has natural caves inside the mountain with natural Shivlingas. The place is incredibly huge and its unbelievable how a Temple has been carved out of such enormous cave.

When we reached hotel we were completed tired, drenched & muddy but in a state of euphoria completely awestruck with the scenic beauty & unmatched peace. At Night we started our journey back home but not before we in our heart bid adieu to this Incredible place and in believing those lines. “MADHYA PRADESH THE HEART OF INDIA”