Our son Captain Gaurav Bhatia, Master Mariner, lives in high end Old Mahabalipuram Road (OMR) Hiranadani , Chennai with his wife Shefali and our 7 years old granddaughter Ariaana while our 10 years old grandson studies in the prestigious Lawrence School in Ooty. Our grandson had long desired that his grandparents come to pick him up for his winter holidays break commencing from 23 Nov 2018. Gaurav chalked out our 6 days itinerary from 22 Nov 2018 from Noida to Ooty, Madurai, Mahabalipuram and Chennai and return back to Noida as any longer programme would upset our daughter Neerja’s busy work schedule and our pet dog Happy.

On 22 Nov 2018, Neerja dropped us at Terminal 3 and I and my wife Rajni boarded the Indigo flight at 1120 hrs for Coimbatore, reaching there by 1530 hrs. Gaurav, Shefali and our granddaughter Ariaana had already reached at the airport driving down their Duster from Chennai covering nearly 480 km from OMR Hiranadani Colony.

Coimbatore also known as Kovai is a major developing smart city in the Tamil Nadu located on the banks of the Noyyal River amidst Western Ghats. It is often referred to as the ‘Manchester of South India’ due to its cotton production, garment and textile industries. Coimbatore is also called as the “Pump City” as it supplies country’s large requirements of motors and pumps. The city is one of the largest exporters of jewellery, wet grinders, poultry and auto spare parts and is renowned education centre. Proudly, Coimbatore is also rated as the safest city in India for women according to the National Crime Bureau Records. We had our first taste of refreshing South Indian filter coffee and quickly left for Ooty.
The Western Ghats are the UNESCO Heritage Site also known as the Sahyadri (The Benevolent Mountains) famous for its biological diversity in the world. They are spread from north to south along the western edge of the Deccan Plateau and separated by a narrow Konkan coastal plain along the Arabian Sea, starting south of Tapti River near the Sonagadh town in Gujarat, running through the states of Maharashtra, Goa, Karnataka, Kerala, Tamil Nadu and ending near Kanyakumari at the southern tip of India with an average elevation around 4000 feet.

The road journey from the Coimbatore to Ooty is roughly around 87 Km. Udagamandalam, also known as Ootacamund, Udhagai or Ooty is a popular hill station over 7000 feet above sea level in the Nilgiri Hills (Blue Mountains). Its economy is based on tourism and agriculture, along with the manufacture of medicines and photographic film. There are numbers of good residential schools including ‘The Lawrence School’. The town is connected by the Nilgiri Ghat roads (NGR) and narrow gauge Nilgiri Mountain Railway (NMR). The Ghats section starts from Mettupalaym which is nearly halfway in between. The roads are quite windy with two route options- firstly, via Mettupalayam-Kallar-Burliar-Coonoor- Ooty with 15 hairpin bends and heavy traffic, while the second option, that we took being Mettupalayam-Aravenu-Kotagiri-Ooty which is slightly longer but with lesser traffic and fewer hairpin bends. Due to heavy fog and drizzle, the visibility was poor and driving slow and fraught with dangers. We reached Ooty around 1930 hrs tired and quickly moved to our 2 room accommodation booked in advance in the Ratan Tata Officers’ Holiday Home (RTOHH). Built around 1890, this colonial era majestic property, nestled on top of a small hillock amongst oak, pine and deodar trees was graciously gifted by Sir Ratan Tata’s wife. My take is that if there’s a place to stay in Ooty, it is this military like Holiday Home right in the heart of Ooty, yet away from the city’s hustle and bustle and a perfect getaway stress buster. There are 20 spacious rooms, recreational area for kids with an outdoor badminton court, Burma Bridge, swings and a walkers’ path while many decent eateries like Hyderabad Biryani House (HBH) located at stone’s throw. We all were dead tired and slept like logs. 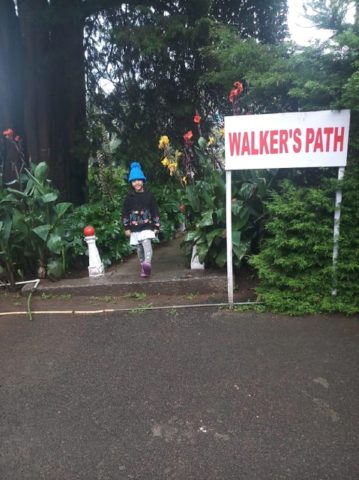 Next day morning, I and my granddaughter went for a long walk and she enjoyed swings and climbs on to Burma Bridge. After breakfast, we enjoyed the trip on the largest tourist attraction on the narrow gauge Nilgiri Mountain Railway from Ooty to Coonoor and back. Coonoor, known for its production of Nilgiri tea is located at an altitude of 6,070 feet above sea level, and is the second largest hill station in the Nilgiri hills after Ooty. The train passed through Ooty Lake, Lovedale where our grandson’s Lawrence School is located and Wellington, which is the home of the Defence Services Staff College (DSSC) – a premier military training institution. The Madras Regiment originated in 1750s and one of the oldest Indian infantry regiments, has its Regimental Centre in Wellington. The fascinating journey with floating clouds, lovely nature’s landscape and well laid tea gardens was very soothing indeed. We saw many foreign tourists too enjoying the ride. At Coonoor Railway Station, we clicked many pictures, enjoyed filter coffee at the platform and boarded the return journey train after 15 minutes. 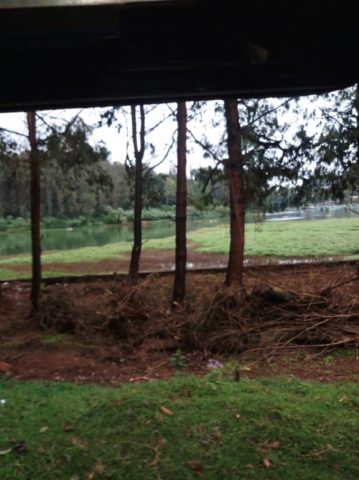 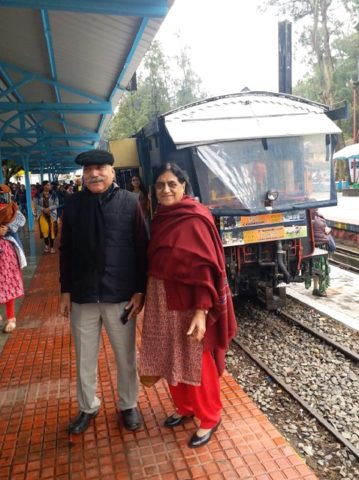 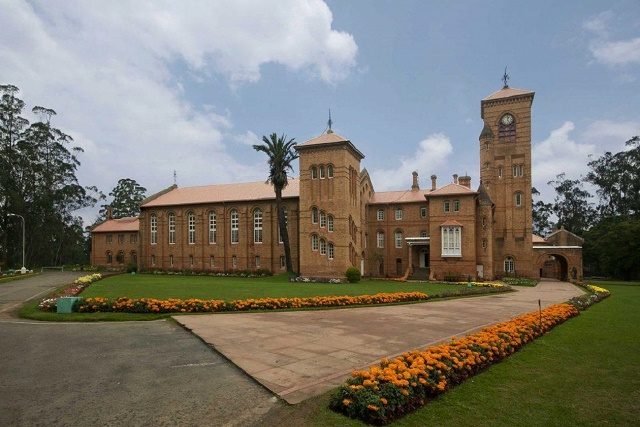 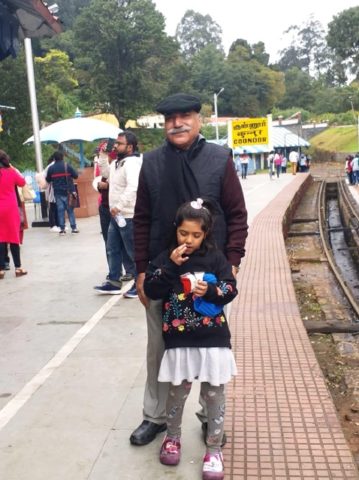 Around 1300 hrs we went to pick our grandson from the Lawrence School located 5 km away at Lovedale, for his winter vacations. The Lawrence School, Lovedale, established in 1858 by Major General Henry Lawrence, is one of the premier coeducational residential public schools in the country which makes the ordinary students into extraordinary. There was sea of high end cars with parents and guardians coming to pick up their kids making a very solemn and emotional reunion. Aahaan initially feeling very shy, after bidding farewell to 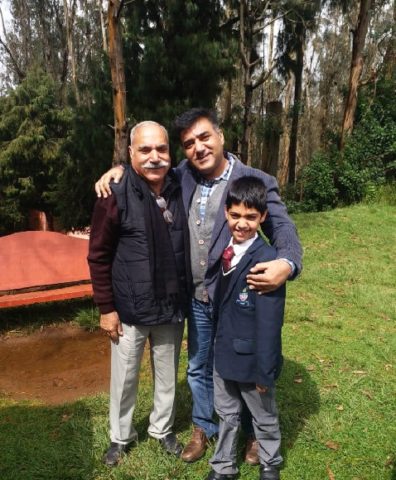 his friends, warden and class teacher mingled with all of us warmly and lovingly. Being very hungry we all drove to Hyderabad Biryani House (HBH). HBH has good ambience and its Biryani, roasted chicken, kababs and numerous food options are gourmet’s delight. We all were tired with day’s events, had a short nap and remained cuddled in our quilts while it was my duty to keep constantly brewing tea for we four adults while our grandchildren enjoyed munching chocolates and playing in the Holiday Home’s well spread and immaculately manicured garden. In the evening, everyone was feeling bit lazy and tired and both Gaurav and me drove up to HBH for collecting packed dinner that we ate and went to sleep. On 24 Nov morning, we packed our stuff and after sumptuous breakfast and drove to our next destination Madurai. The drive through tea gardens spread over the slopes of the Nilgiri Hills was good as we missed that on our way up journey due to fog and late evening darkness. The road and civic sense in the entire South India are much better than what we go through in the North India. While in the hill stations in the North India, tourists from plains through plastic waste everywhere and deforestation is destroying the ecology, the Nilgiri Hills are ecological delight. 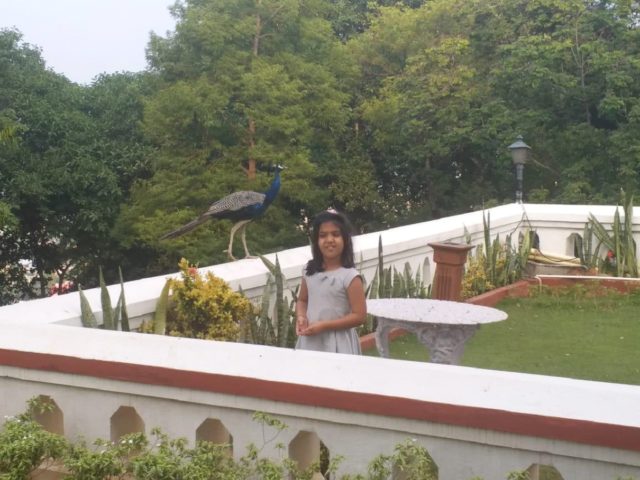 ‘The Athens of the East’, Madurai, located on the banks of Vaigai River is the second largest city of the Tamil Nadu famous for its Meenakshi Temple. We reached our pre-booked accommodation ‘THE TAJ GATE AWAY HOTEL’ located on top of a small hillock. The main building was the erstwhile residence of the CEO of the Madura Coats Ltd, since 1890 and acquired by the Taj Group in 1989 that has now 63 rooms in 5 blocks. The warmth, food, layout, ambience, nature walk, birds, flora and fauna, the romantic ‘Moon Deck’ and gastronomical Madurai Cuisine were out of the world experiences. It was fascinating to see peacocks mingling with tourists nibbling roasted chanas from their palms. In the evening, we went for the Darshan of ancient Meenakshi Temple which is major pilgrimage destination within the Shaivism tradition, dedicated to Meenakshi (Parvati) and her consort Shiva. 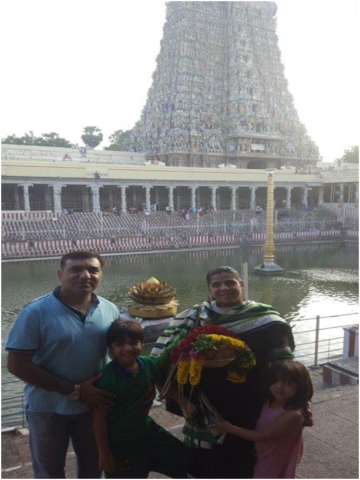 On 25 Nov after breakfast we left for our onward journey of nearly 435 km to Chennai. We reached late evening very tired and hungry but the house maid had prepared delicious dinner that we all ate and slept. 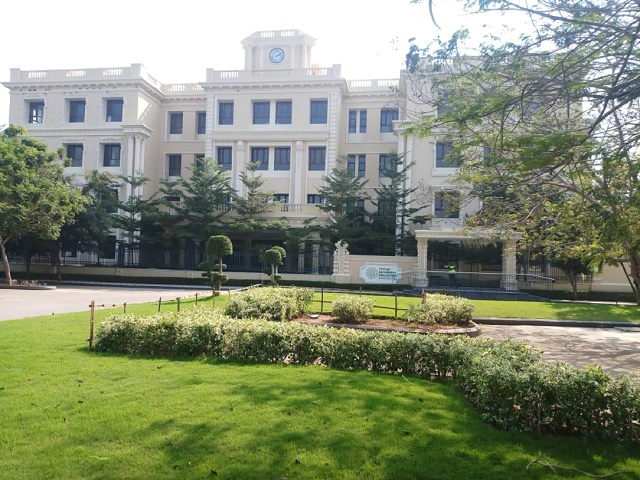 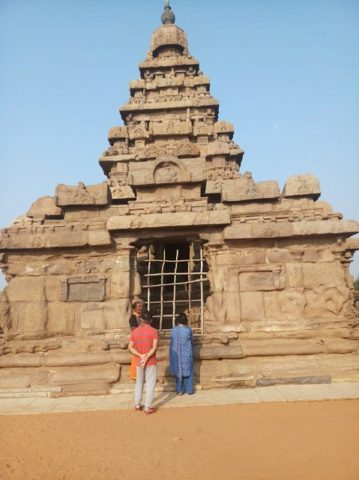 The next morning I went around the sea facing side of the complex for my early morning walk. After breakfast we visited Mahabalipuram which is 28.5 km via East Coast Road and 35 minutes drive, to see the monuments built during the Pallaya dynasty. In the afternoon we had hurried visit to our granddaughter’s Chettinad-Sarvalokaa, an extremely impressive school. The infrastructure is eye opening, the classrooms spacious and air-conditioned and the teaching methodology laying emphasis on creativity. It has classes from grade 1 to 5 with only 30 students in the entire school laying greater emphasis is on creative learning. Later, we visited Dinesh Vihar where we has acquired a new flat in the AWHO complex and the Officers Training Academy (OTA) which was our last agenda of the itinerary. On 27 Nov we flew by 1120 am Jet Airways flight to Delhi thus ending our hectic schedule carrying nostalgic memories for ever in our bodies, hearts, minds and souls. 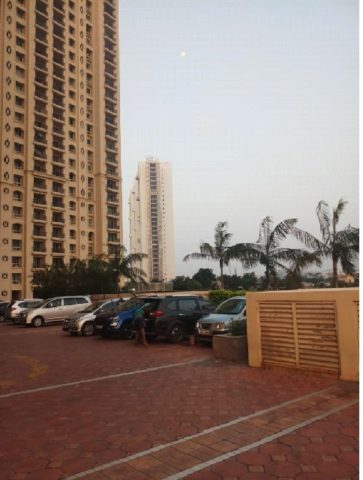 Col NN Bhatia ,popularly known as Nini Bhatia in the army was commissioned in the Kumaon Regiment in 1963 and retired in Sept 1995 after 32 years of distinguished service. He is a die hard Kumaoni & written four books- Kumaoni Nostalgia, Industrial & Infrastructure Security in two volumes & biography of another die hard Kumaoni mountaineer of international fame- 'Soldier Mountaineer'. He is prolific writer & has been columnist with 'Lahore Times' & 'Turkey Tribune'.

We called up our hotel in Phnom Penh as well as Can Tho, but no luck. Everyone shared the bus routes but all of them were going to Can Tho, via Saigon. It seemed so lame and dumb to do that. When everything fails, Internet comes as a savior so we started scavenging sites like TripAdvisor, Lonely Planet and what not. To our luck, we found one hard-to-believe post saying that