The last and the only smoke happened in the warm balcony where I stood overlooking those tall and shiny structures, defying what Issac said many moons ago. After I was done with morning ablutions, it was close to 10 in the morning and what a bright sunny day lay in front of us. It was as sunny as it ever can be. The plan for the morning was to have no-plan since there was a plan for the afternoon-to-evening. An old friend, Jogiraj dropped in and he took us around, showing us the Knowledge city, Media City, Marina complex, Lake Jummeira complex (all from the Car cabin). Finally we went to the famous Palm islands, trying to make sense out of those big structures on either side of the main trunk, while we discussed the life at the oasis and general chit-chat.

Burj was visible from many places. After that drive, we decided to spend some more time at ‘Mall of Emirates’. Some more shopping and after paying a small visit to his place, we came back, all prepared to go for ‘Desert Safari’. 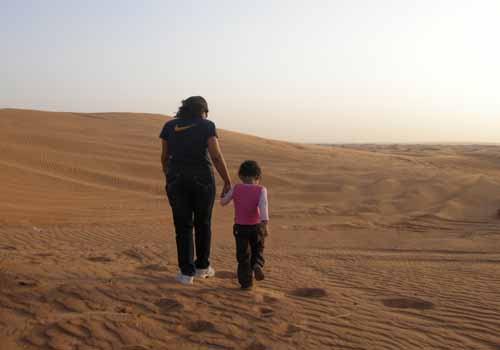 We had booked our tour through ‘Lama Tours’ and we were advised to be in hotel lobby between 3.30 to 4.00 PM. The guy was on time and about three quarter past 3, we started towards the base-camp. After leaving the city traffic, whatever little it was owing to weekly holiday, we started cruising at 120 KMPH. All, I would guess, cars in Dubai are fitted with this alarm-buzzer which would start to beep as soon as you cross 120 KMPH. 120 KMPH is the max limit on all the roads, its less for internal roads. I know some of you maniacs would curse this and would get ready to drive with the buzz, well, not really, since the buzz things stops as you go beyond 140 KMPH. So the trick is, dont kill me please for this, to be at 120 and then go down a gear, floor the paddle and be beyond 140. This is exactly what Victor was doing, our Filipino Saarthi on that Toyota Land Cruiser.

After about 45 minutes or so, we were at the base camp or the starting point and we could see dunes. There was a lot of activity happening at that place. One could have soda-pops there, probably beer as well, hire desert-scooters and scoot around. I also saw a couple of open jeeps with a funny contraption, I think one can take joy rides since they didn’t seem equipped to handle the real desert. We were given the option to relieve ourselves and was asked to be prepared for the Safari.

There was still enough light outside but the temperature was getting a little towards the pleasant side. In any case, we were to remain the confines of air conditioned cabin because of dust. Finally after exchanging pleasantries with fellow guides, Victor stepped down and released some pressure off the wheels. Whatever extra traction you can get, it would come as a bonus. It was a Manual transmission and he slipped the gear and we started the climb slowly. 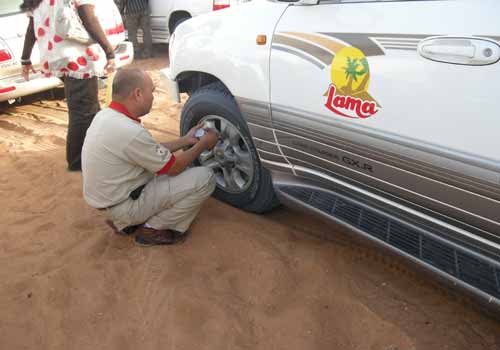 This was my first motor-able venture into desert and I had no prior experience on how the wheels behave when you give them a bed of sand which you can’t hold it in your fist. The ride was smooth in the beginning as the real fun had not yet started. After covering few hundred meters, Victor stopped the car and requested everyone to belt themselves well. I was on the last seat with Pihu. I looked around and noticed that there are at least 10 other cars, all Land cruisers, following ours. 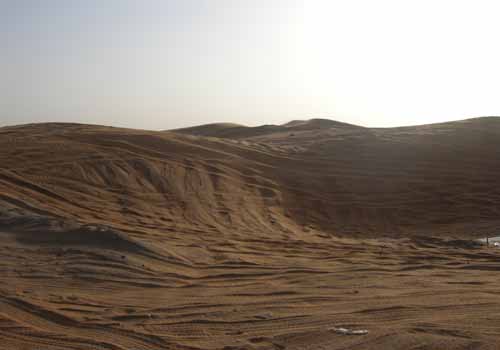 And then started the fun. Whatever had happened so far was just a humble beginning and the real fun kicked in now. For next 30 minutes of so, or even more, we were jumping over the dunes. Initially we were just trying to keep ourselves steady by holding on to whatever we could and it was only after a few minutes that we could gather enough control to look out. As we looked out, it seemed that there is this real vast desert with sand all across creating a sand-world and we were furiously trying to cut through that world, to sort of go far and to finally get lost. After some more time, we discovered that there are at least 50 (later we asked Victor and he confirmed that it was close to 100 on that particular evening) more cars which are leading or following us. It was a sheer out of the world experience where we were going at high speeds, > 50 KMPH, maneuvering each dune as we cross it, shearing , jumping, cutting our way in while we rolled in the cabin and struggled hard to manage a good view. 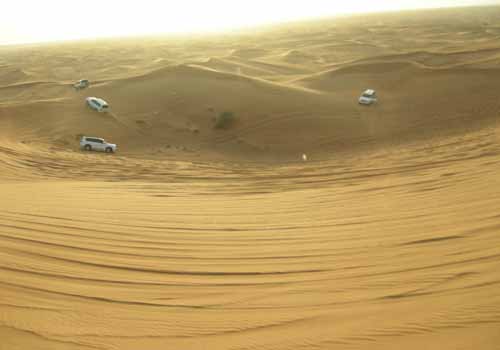 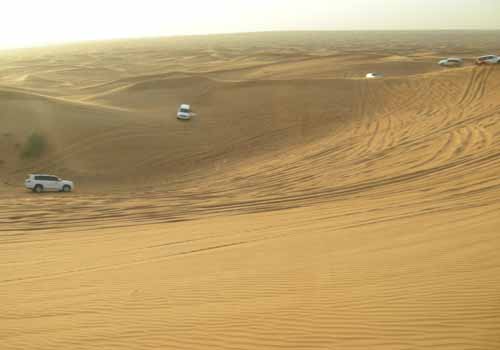 Its getting hard to express the experience well enough and I could guess that so I shot this video. All the shaking (since we were in Shekh land) is real and you can probably imagine what we went through. Its a little longish video so may take a while to download and play.

After this roller-coaster ride, we finally reached a frontier, spend time playing with the sand, getting clicked by ourselves as well as the tour-operator and as it went dark, we started our journey towards the main camp. A great sun-set to experience. 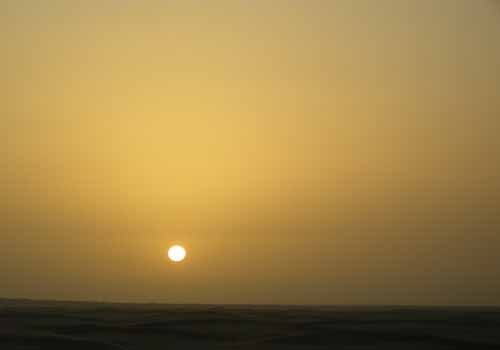 Main camp was further 30 minutes away and even though we were still driving on sand, it was a fairly leveled straight path. Near the camp, they had some more of sand-cars (similar to what we see here in go-carting places) with real large tyres. One could hire them and have some more fun. They guy who was managing this was heard speaking hindi fluently. 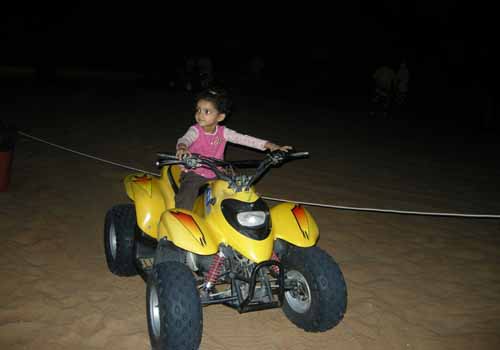 P on the desert go-carting

The camp was pretty big, a sort of barricaded area with a large open space in the center for the belly-dancer, flanked all around by low height tables and ground seating. There were kiosks all around , some of them selling pop-corns, whereas at others you can go and have some seesha (hookah). One can take a camel ride as well. There were Food counters and ‘Water of life’ was available. We had our share of dance, food and drinks.

As we were coming out, we noticed that they were selling a small kit having a 8X10 photo of yours, which they clicked after the safari stop, and a CD which had a video. It was a very smart move and I was very impressed with the fact that they could execute so quickly on this. Within a short span of 2-3 hours, they shot the video, the photos, took all the prints, fit those prints in some kind of paper-frames, put this stall and then be able to sell that and make some money. It needed a fine machinery to achieve all this and I guess that’s one of the big reasons, Dubai is picking up so fast over the recent times.

The drive back home was routine. We got the tyres pressured to sustain the black solid tar and cruised for our homes. It was one real big ride of our life time.

Mumbai is a place many of us have visited. I personally have been there dozens of times, but the city never fails to excite…