I wanted to see and photograph the elusive mountain goat known as Nilgiri Tahr for some time, and grabbed the opportunity three years ago when I traveled to Kerala with my brother. It was a long flight from Canada, via London and Dubai and landed in Cochin. After a brief rest we went to Kottayam, some 45 miles south and from there drove four hours east to Munnar, a hill station famous for its tea plantations. It was late September and the climate was perfect. Surrounded by huge mountains and lush forest interlaced with streams, this area is ideal for wildlife habitat. 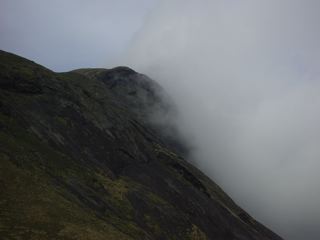 Misty Mountains in the morning and late afternoons. A photographer’s delight.

Munnar- side roads to accommodations 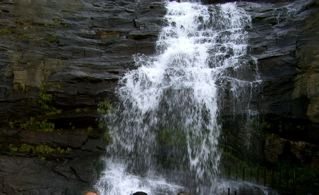 A majestic waterfalls on Kottayam- Kumili Road, close to Munnar

The Kottayam-Munnar road wasn’t perfect and some parts were under repair. But as we approached the hill station, we felt the temperature changing from a steamy 34 degrees in the plains below to a cool 20 degrees C. A stop at the famous Kallar waterfalls was a welcome relief. Here the lorries stopped and fetched water for their over heated radiators. Nearly all the tourists stops here to take photographs. After a heavy rainfall, one could hear the thunderous sound of the falls from a distance. The fresh water coming down from the mountain streams is drinkable according to the local inhabitants(see picture below). From here to Munnar, the terrain becomes rocky and the roads steep as you zig-zag to the higher altitude.

Once arrived in Munnar, we checked into an assigned hotel overlooking a huge tea plantation. The biggest name here is the Kannan Devan Tea, which I believe has been recently acquired by Tata company. Armed with cameras and fresh water bottles, we set off to the Eravikulam National Park, a wildlife habitat exclusively for the preservation of the rare Nilgiri Tahr, through well maintained tea plantations. Here, at the end of the winding narrow road, you park the vehicle, buy tickets and start walking up a steep road. The air was cool, so one doesn’t have to worry about sweating. After climbing to yet another higher altitude, we arrived at a long flat ground surrounded by  misty mountains, and there they were, the Nilgiri Tahr, a large number of them scattered throughout in search of fresh greens. 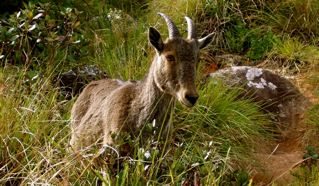 These animals appeared to be tame and were not afraid of humans. Once abundant in southern Indian hilly area, now they are confined to Park here away from the hands of poachers who slaughtered many for their meat and skins. The flora in these hills are remarkable, especially a rare flowering plant called Neelakurinji which comes to bloom only once in twelve years. The hills are loaded with long elephant grass and wild flowers, a feast for your eyes at 6000 feet above sea level. 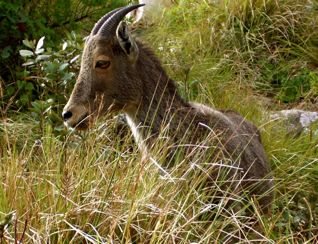 Apart from man, the only enemy for the Tahr is the leopard which is abundant in this area. In the early 1960s leopards were killing the livestock in the adjacent areas, and a tea planter named J.B. Soutor had tracked and killed several of them. Tiger sightings are extremely rare in this part. Nevertheless, the area is guarded by several Forest officials to protect the Tahr from any over ambitious tourists who annoys the animals by approaching them too close. We took several photographs during the day, and after descending to the entrance of the park, we stopped at the small museum where there were several photographs and skulls of leopard and bison on display. Outside the museum there is an area where the exotic and rare Neelakurinji plants are cultivated. 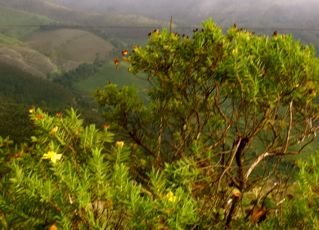 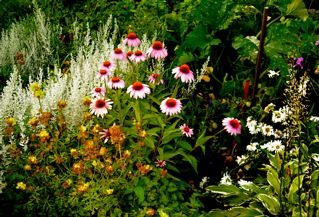 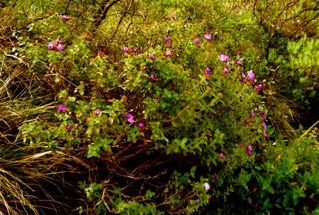 We returned to the hotel through narrow winding roads -modified bridle paths -carved in the midst of miles and miles of lush green tea plantations. The town itself has a number of shops, restaurants and hotels including well stocked bookshops.

Nilgiri Tahr feeding on the mountain ridge. Bring a camera with zoom lens with you.

How To Get There? If you go, the nearest airport is Kochi (formerly Cochin). From here you can take a bus to Munnar, or better still, hire a taxi – but negotiate the fare first. There are several hotels in Munnar to suit every one’s pocket. Book your hotel via online in advance. I think the best time to see these animals are September, October and November. Avoid trips during May, June and July as the monsoon rains are rather heavy in this area during that period. Kerala is famous for its mouth watering cousine. Try their famous idli and dosai with sambar for breakfast, a mutton biriyani for lunch, various vadai , samosas or plantain chips for snacks, and enjoy a dinner consists of fried karimeen (a fresh water fish available only in Kerala), steamed rice, thoran (fried vegetables with shreaded coconut and curry leaves). Vegetarian dishes are also available. No one leave Kerala hungry, as there are all kinds of eateries to attend your taste.

Once arrive in Munnar, visit the Kerala State Tourist Bureau right in town to obtain guide books, maps, accommodation details and a recommended list of sights to see in and around “Munnar” which means Three rivers in local Malayalam language. Make sure to pack a woolen sweater, as hill stations can get cooler during the evenings.

On the trail of Nilgiri TAHR was last modified: October 12th, 2019 by Jerry Jaleel

Traveled a bit, covered Canada from Atlantic to Pacific, visited various parts of USA including New York, Minnesota, Washington, Montana, Buffalo and North Dakota; traveled in India from the Himalayan foothills ( Naini Tal) to the Cape Comorin in the south; European visits include Holland, France, Germany, United Kingdom, Sweden and Denmark; took part in photographic safaris in Kenya and Tanganyika, and toured in Dubai and Abudhabi. All time favorite author: Jim Corbett