This is a continuation of my last post about the 10 most spectacular sunrises and sunsets I have seen. Obviously, I have seen more, and I will tell you about 10 most gorgeous sunrises and sunsets here. Most of them are from my trip to Florida, though some are from Washington and Oregon too. My friend DK, who is an avid traveler and an enthusiastic photographer, was with me in some of the trips, and took a few of the pictures I am going to show you. 3 days ago, I was at a beach in North Carolina, and once again I resolved to watch the sunrise early in the morning. I had two mornings, and the first one, I woke up late and had to be content watching it from the room of my hotel instead of heading to the beach. The second day, the sun was partially shrouded by clouds, and though I had a wonderful experience watching it rise, I was not able to get any good shots of it. I tried watching the sunset from a sand dune, but this time too, the sun had long disappeared in the thick clouds even before it was time for it to set. Once again, I had two failed sunrises and a failed sunset (in terms of getting good pictures). You see, it is not always easy to capture sunrises and sunsets, but I digress here.

So once again, I present to you in this post, a selection of my 10 favorite sunrises and sunsets across different parts in the U.S.A. Some of these pictures have been taken by other friends who were with me during the trips. 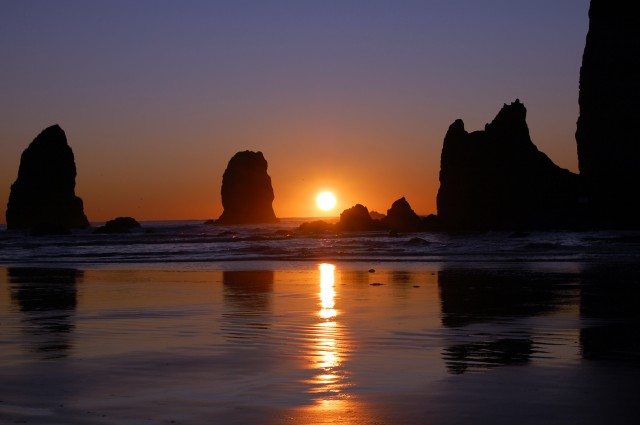 2. Sunset by the Key Largo, Florida. This is by the Gulf of Mexico. The Keys are a bunch of islands off mainland Florida, and it is one of the more scenic drives I have taken. As usual, I went a little crazy in this trip, taking pictures of multiple sunrises and sunsets during my stay in the cold end of November mornings and evenings. The next two pictures of the sunset will testify that. I especially love the picture with the parachute above the sun. The sunset must have looked all the more wonderful to the people up in the parachute. (Key Largo, Florida, Winter of 2010). 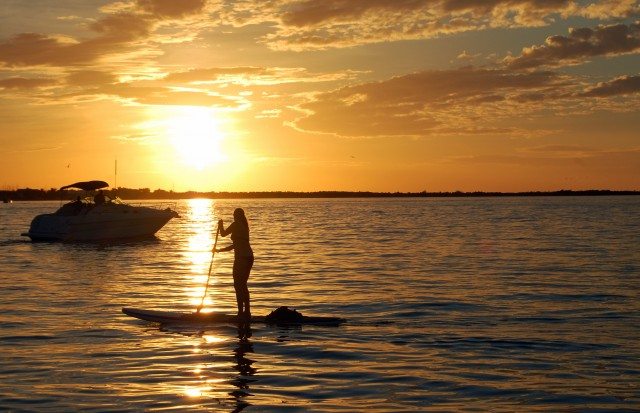 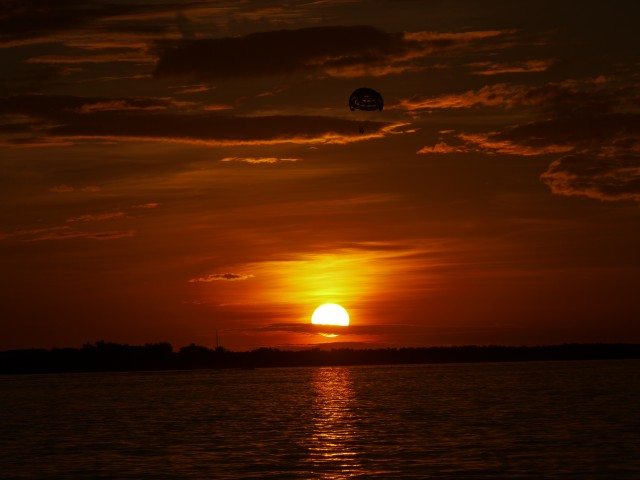 4. Sunrise in Miami, Florida: Same trip, but different time of the day. The green and aquamarine color is very typical of the Miami beaches I know of. It was a peaceful morning of watching the sunrise, serene green and all, unlike the fiery sunrise from the same place the next day. (Miami Beach, Florida, Winter of 2010). 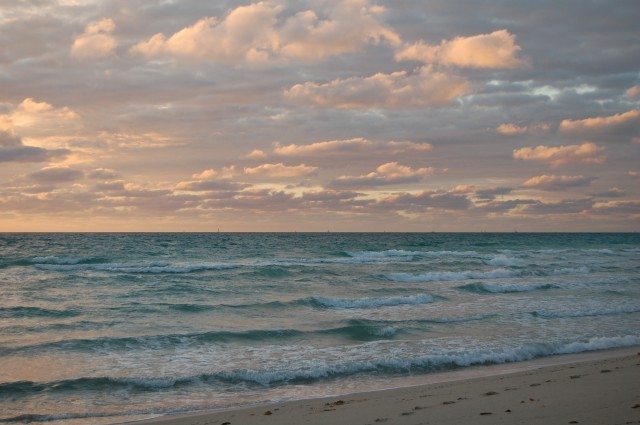 5. Sunrise in Miami, Florida: Unlike the calm, serene sunrise you saw from the previous picture, this was a fiery sunrise, observed from the same beach the next day. The clouds painted the sunrise red and orange, and I have never seen a more angry sunrise. It seemed the sky was on fire. We were apprehensive initially because we were worried the huge ship would block our view of the sun. In fact, the ship painted the most picturesque sunrise I have ever seen. Thanks to my friend DK for capturing the next two gorgeous pictures. (Miami, Florida, Winter of 2010). 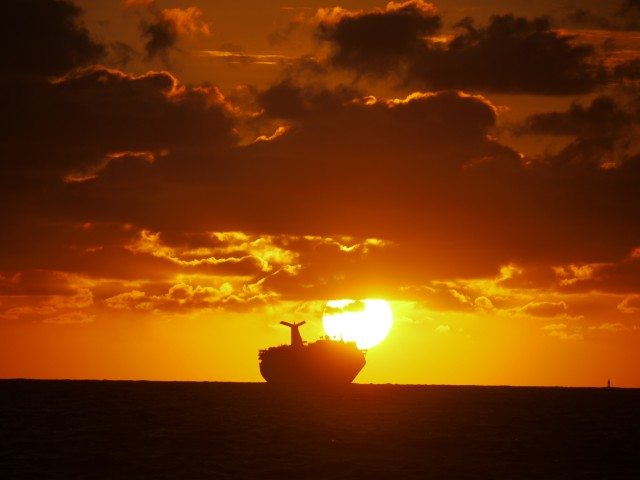 6. Sunrise in Miami, Florida: This one if after the sun rose and got shrouded in the clouds, and the ship was out of the picture. (Miami, Florida, Winter of 2010). 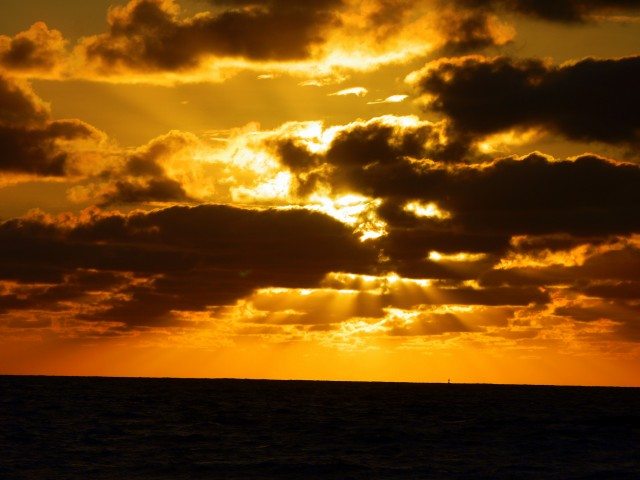 7. Sunset by La Jolla Cave, San Diego: This is a picture taken by the Pacific Ocean on the first sunset of the year 2011. (San Diego, California, Winter of 2011).

8. Sunset by the Gorge, Washington: This was a sunset captured by my friend DV when we went to watch the Coldplay concert. This is an amphitheater by the Columbia River in George that can seat more than 20,000 people and is considered one of the most scenic concert locations in the world. This was right before the concert started. (Gorge, Washington, Summer of 2009). 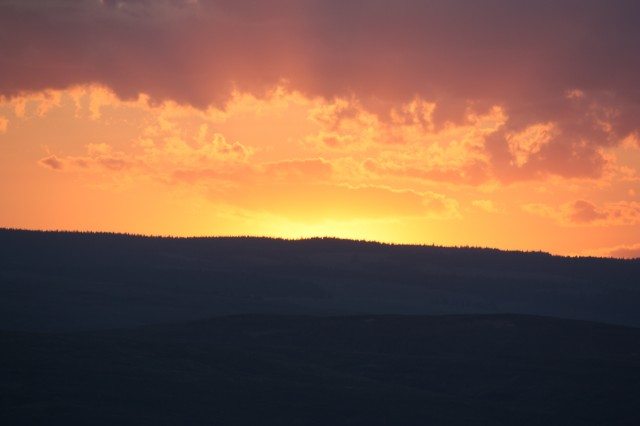 9. Sunset by Tampa Bay, Florida: This is the famous sunset of Tampa Bay I missed watching because I was caught in a bad traffic jam (mentioned in the last post). Last winter, I was driving from Orlando, hoping to catch a spectacular sunset by the Tampa Bay. Fate had something else in store for me, which is, being caught in a traffic jam, and watching the same sunset from the car, as I drove. It would certainly have been nice to watch it while I was not driving, but hey, this was unique in its own way. (Tampa Bay, Florida, Winter of 2010).

10. Sunset by Key West, Florida: An amazing picture taken by my friend DK, this is one of the most serene pictures I have seen. It was a cloudy afternoon in Key West, which meant the sun was shrouded by the thick blanket of clouds, and there was no sunset to be seen. However, this picture reflects the diffused light of the sun as it set. Although it is not a picture of a direct sunset, it is unique because of the diffused light. (Key West, Florida, Winter of 2010). 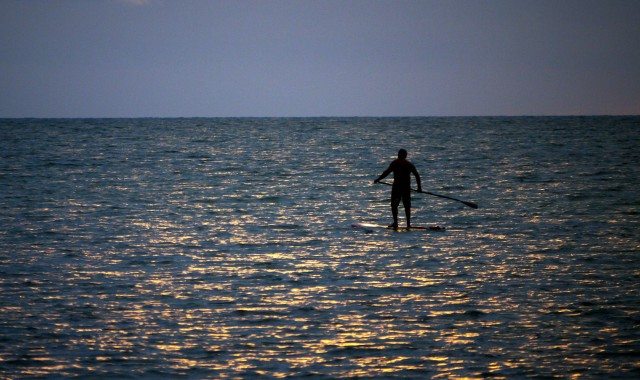 Again, which one is your favorite picture from this collection?

Of Dawns and Dusks was last modified: June 3rd, 2020 by Devasmita

We started our journey late night from our office campus. Booked a traveller so that we all gather at office and start our journey from there only. As some of my colleagues have their respective shifts so it was the better option to start the trip from office. So we started it at around 10:30 pm and took some snacks and juices with us as it is going to be a long and tiring journey specially after office hours. We got seated ourselves in the traveller and started our trip.