I have always wanted to drive long distances rather than be driven, flown or put on a train. On the two occasions that I visited the  USA I drove cross country to my heart’s content. But here in India the condition of the  Highways was a big problem. Then came the Mumbai-Pune expressway and I felt reassured that some day we will have highways comparable to the USA. Then came the Golden Quadrilateral and the promise that some day my dream would be fulfilled. 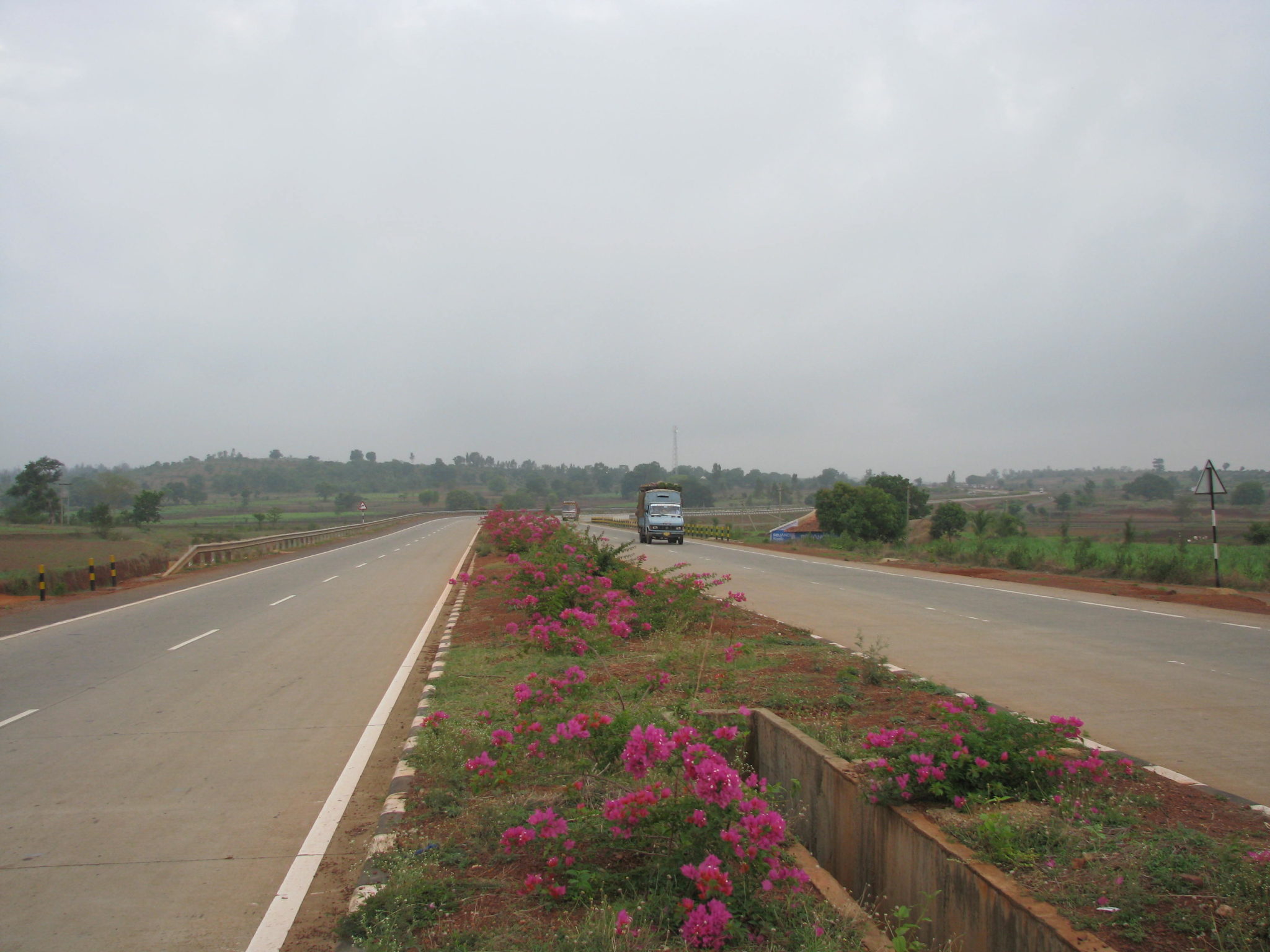 Then, in February we went on  a long weekend trip to Lonavala. While driving around Lonavala we briefly hit the old NH4.    The road impressed us and my wife, who never liked to travel long distances by car because she felt car sick on our roads, but never had the problem on the smooth roads in the USA where cars cruised at a uniform speed, surprisingly suggested that we should travel to Bangalore by car this summer. I, naturally, thought she was joking, but we did keep the option open. After some discussions, gathering of information from friends and reading the experiences posted on this website by Sudhir Raina and Aditya Sapru, finally we  decided to take the car and on the 12th May 2009 we started off in our Mahindra Scorpio at 5 am.

On the Mumbai-Pune Expressway as we started climbing up the steep Ghat, the Engine malfunction light of the Scorpio started glowing. I ignored it for a while but in a few minutes the engine stalled. I pulled over to the shoulder in neutral gear and wondered why should such a thing happen to a car that had been serviced and thoroughly checked just 15 days back and which had never before in the last 4 years  given me any problems at all. Fortunately, the engine restarted at the first attempt and we were on our way again.  After we crossed Lonavala and while we drove upto Pune the engine stalled at least 4 more times. I called a friend in Pune who gave me directions to a Mahindra Dealer in Pune.

At 8.30 am we were at the doorstep of Silver Jubilee Motors Pvt. Ltd. The workshop opened only at 9.30am, but once it did and they learnt of my predicament they literally swung into action and quickly found out that the cause was a clogged fuel filter thanks to dirt particles in the diesel which I had filled to the brim  in Mumbai the previous day. They drained all the diesel, removed and cleaned the tank, the fuel line and changed the fuel filter. In 3 hours the car was ready for a refill and was raring to go as indeed was I. I must mention here that the staff and technicians at Silver Jubilee Motors were very helpful and without their co-operation we would, in all probability have been stranded in Pune for a long time.

We had finished Lunch while the car was being attended to. At 1 pm we were back on NH4. As we moved away from Pune the traffic on the Highway thinned and we started enjoying the drive. We reached Kolhapur at about 4 pm. The vast stretches of sugarcane plantations left little doubt that we were in Kolhapur.  By now I had noticed that another warning light had started glowing in the Scorpio’s instrument panel. This time it was the   “water in fuel”  indicator light. The vehicle was running very smoothly and without any hicups or jerks. We saw the big M (MacDonald’s) sign and took a tea/coffee break. I called the service advisor who had attended to my vehicle in Pune and after hearing me he felt that it could be a false alarm since the vehicle was showing no signs of there being water in the fuel. He advised me to drive on without worrying too much about the indicator.  We drove on towards Belgaum which we crossed  just after 6 pm.

Our original plan was to stay overnight at Dharwad. Despite losing 4 hours in Pune we still managed to reach Dharwad before sunset. We had checked the internet for Hotels in Dharwad and had identified Travel Inn next to SDM Dental College on Poona Bangalore Road. We thought it would be on the National Highway. So we let the Dharwad exit pass and drove on towards Hubli. When we found nothing around the Highway we stopped to ask a constable posted on the Highway to stop traffic to make way for a VIP motorcade. We learnt from him that “Poona Bangalore Highway” meant the old highway that passed through Dharwad and that we were driving on the by pass road on which we would not find any Hotels. So we took the next exit and drove backwards about 14 kms into Dharwad and reached the Travel Inn at about 7-30 pm. The Hotel turned out to be a very comfortable Hotel. They offer well equipped air-conditioned rooms even for 12 hours. Over a light dinner in the open air restaurant we enjoyed watching an IPL game on a giant TV screen.

The next morning we checked out and left at 6.45 am. A quick stop to refill diesel and we drove on to the old Poona-Bangalore Highway through Dharwad and Hubli. The road joined  NH4 five Km after Hubli and we were on our way again.

The Highway so far had been smooth and  excellent. I must say that it was a breeze driving upto Dharwad. There was no fatigue at all. The Scorpio’s performance was like a true Highway car. It cruised effortlessly on the pothole free and virtually scratch-less Highway at speeds of 100 and more for hours on end and was always eager for more. It gobbled up the distance without any hesitation. The road was fantastic to say the least and we were most comfortable inside with the powerful air-conditioning keeping the heat and dust outside. The  trees and flowering plants and shrubs grown on the median and the greenery surrounding the Highway made for a very interesting and scenic drive. The growth of the trees and bushes is quite thick at places. Despite this villagers sneaked out of no where to cross  the Highway. Even bullock carts pulled by 2 bullocks jumped over the broad road dividers from the openings in between the thick  growth.  Some vehicles drove towards us on the wrong side of the road, sometimes on the extreme left and some times even on the right by the median.  One had to look out for such hidden dangers. I preferred to cruise in the second lane and use the first lane only for overtaking.

This good road continued upto Haveri. Thereafter, upto Chitradurga the NH4 (Golden Quad) is still being constructed. There are numerous diversions which hinder your progress and the drive becomes tedious. Speed breakers are like mountains and are unmarked. However carefully you drive you are bound to hit a couple of them at speeds higher than you would be comfortable crossing them at. Your vehicle and luggage will be thrown all over the place. If and when you sight them at the last moment you will feel a knot in your stomach and you struggle to control the hard braking vehicle leaping  over them. 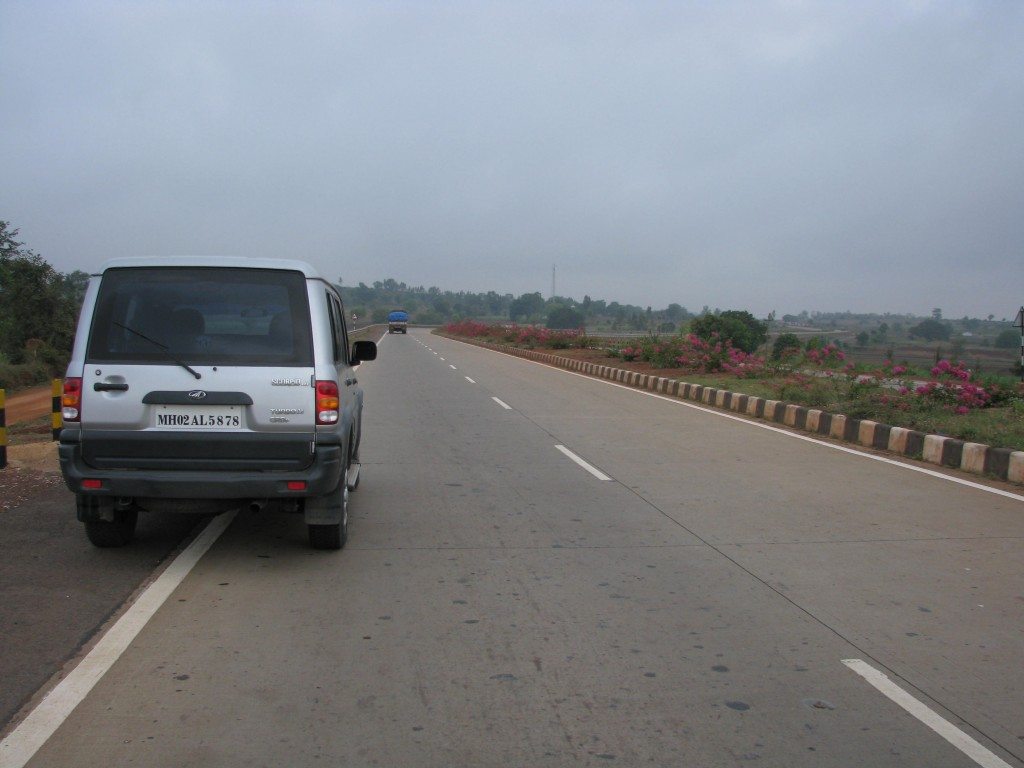 The road from Chitradurga to Tumkur is again fantastic. At places the road is a six lane concrete road. We were much relieved to see such a smooth road once again. We reached Tumkur and continued on NH4 upto Yeshwantpur in Bangalore. Before the Yeshwantpur circle we turned left onto the outer Ring Road and headed towards Hebal. We then turned left onto NH7 (Bangalore-Hyderabad) and reached our destination in Yelahanka at 2-15 pm. We thus drove 8 hours on day 1 and 7 hours on day 2.  We had covered 1086 Kms. We had enough energy to go for a refreshing swim in  the evening.

The next morning I decided to make a trip to the Mahindra dealer’s workshop on Hassergatha Road in Bangalore to get the “water in fuel” indicator light checked. A quick check confirmed that it was a false alarm. There was no water in the fuel but the sensor itself  was not functioning. The sensor was not readily in stock and I was advised not to bother about it till I reached Mumbai. The technician disconnected the wiring leading to the sensor, the light indicator in the dashboard panel thus disappeared.

We left the car in Bangalore. Hampi via Hospet and Yercaud via Salem were done by train from Bangalore as originally planned. We reached Bangalore on the night of the  25th of  May and left for Mumbai at 10.30 am on 26th. We saw the windmills, and rice fields being harvested and chaffed and dried along the Highway under construction. We checked into the same Travel Inn, Dharwad, at about 6.30pm. On 27th we left Dharwad at 7.30 am and reached Lonavala at 2.30pm. We stopped in Lonavala for an hour and a half and reached Mumbai at 6 pm, satisfied that driving long distances in India without undue fatigue and hassles is no longer a dream but a reality. We look forward for much more… 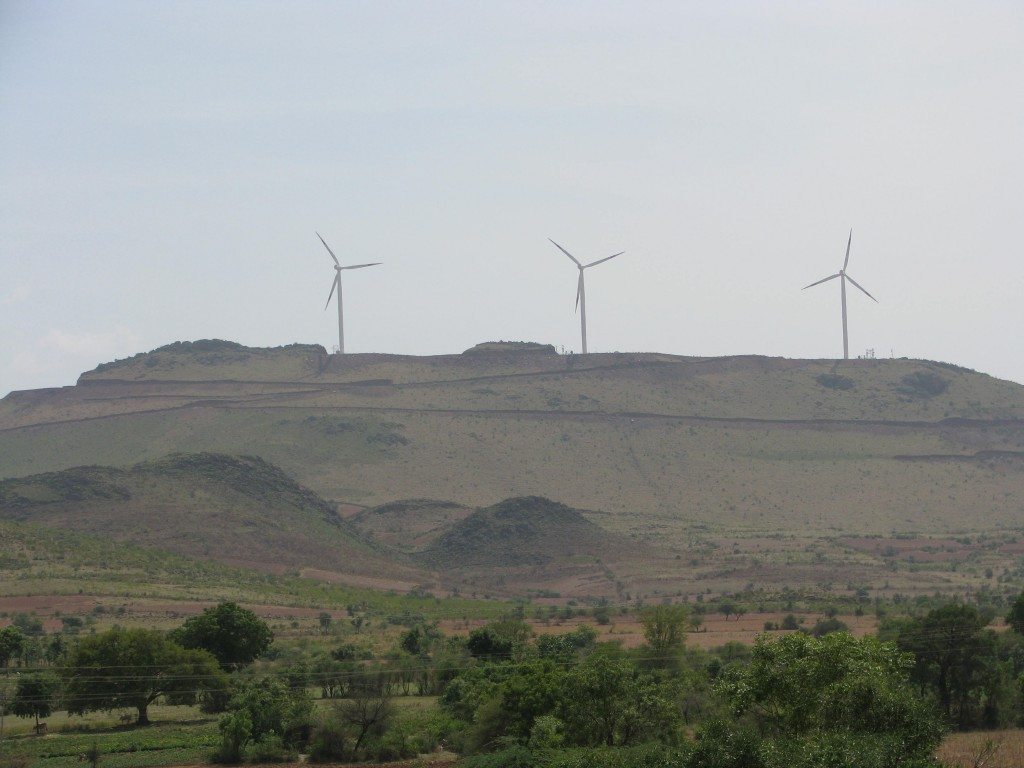 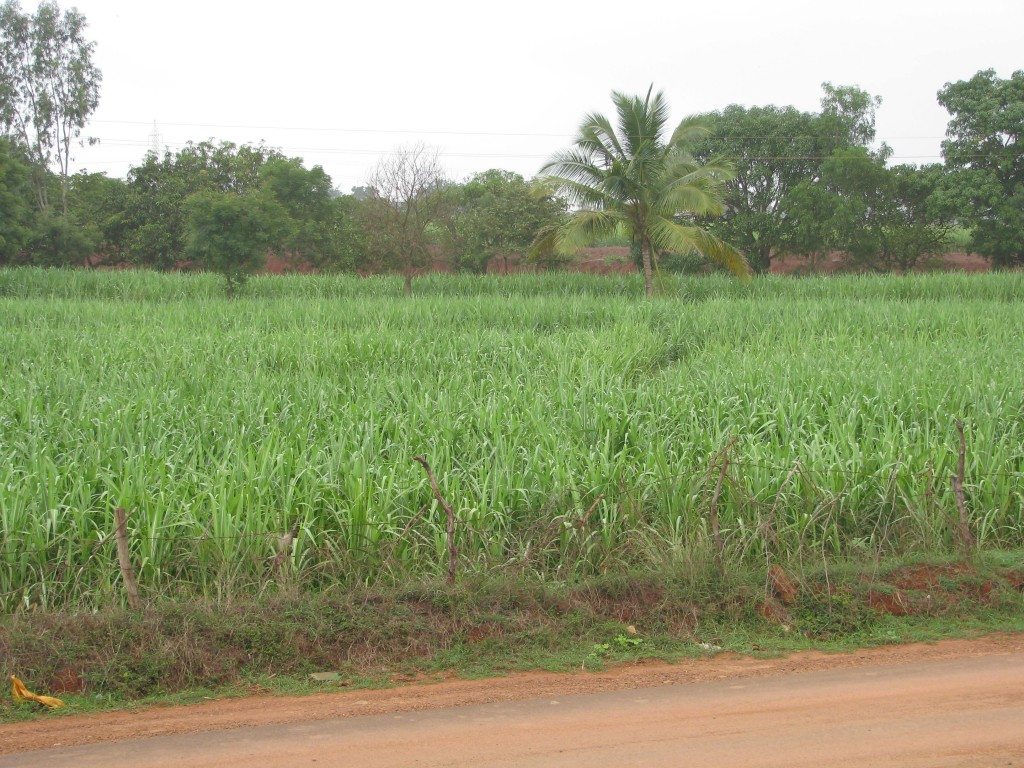 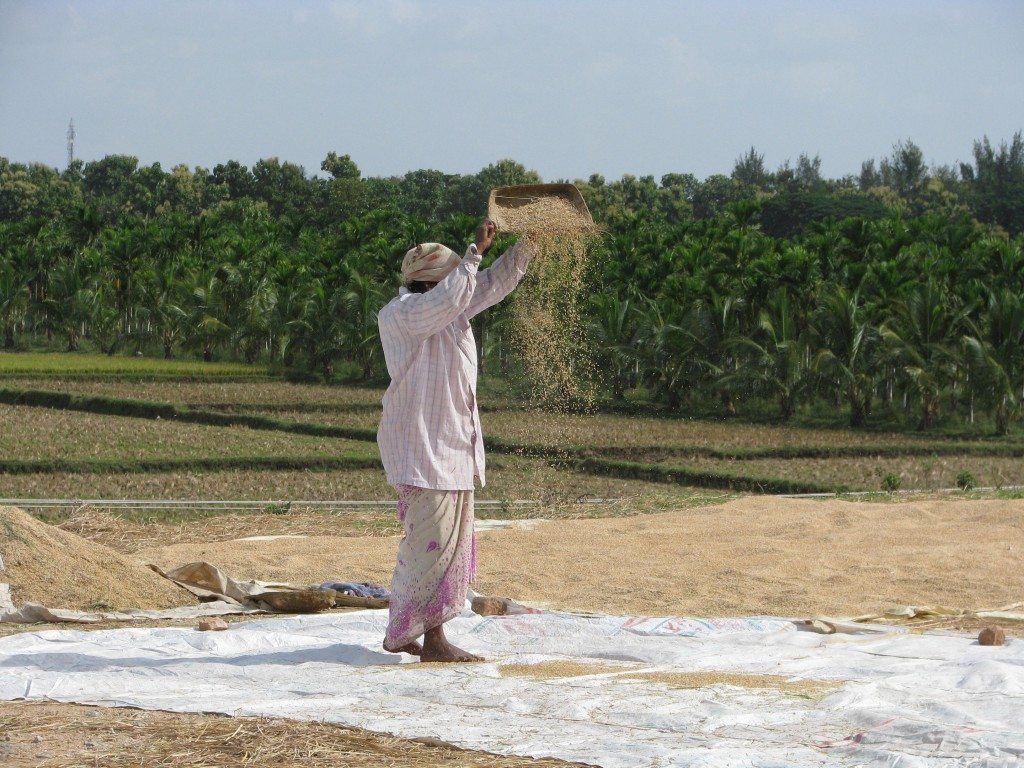 I may add that we really need rest areas and clean toilets at regular intervals on the National Highways. It is simply unbelievable that a Government which can build such beautiful highways running into thousands of kilometers at an expense of thousands of crores cannot provide and maintain such a basic amenity on the Highways.

Mumbai to Bangalore & back by road. was last modified: October 13th, 2019 by hiteshbuch

Am a lawyer by profession. Passionate about cars and driving on my own--city traffic or highway. Happiest when in the driver's seat. Handyman-do it yourself kind. Always want to try locating & fixing faults in machines of daily use.

This place is located nearly 1364 Meter above the sea level . The Kempty Falls, surrounded by high mountain ranges and located at a high altitude of 4500 feet, is a good place for picnic or for spending a couple of hours listening to the music of water in the midst of the Greenery which cover the surroundings This waterfall attracts many tourists particularly from plain areas. Located at a distance of 15 KM from Mussoorie town , it can be visited by conducted tour or by taking a shared taxi near Gandhi chowk taxi stand. We opted for shared taxi.