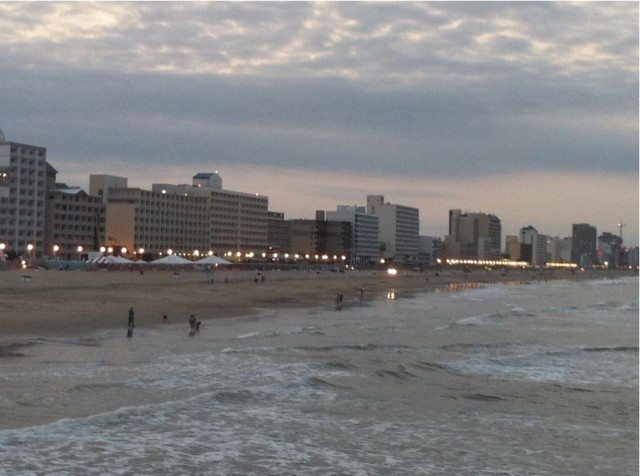 Last year when me and my husband planned for a vacation on an extended weekend of Labour day in US we had enough discussions that which will be an apt place to visit.

I immediately surfed the net and thought that Smoky Mountains in Tennessee will be a nice choice since its been ages I visited a mountainous region. Our new Honda Accord was not even a month old and we were all excited to drive it to our new holiday destination. Though I wanted to be on the hills, he was never fascinated by the slightest idea of going to a hill station. Considering that Tennessee would have been a long drive for him from Charlotte he was not very much keen on it. Rather he suggested of Hilton Island in South Carolina as that would have been an easier bargain in terms of traveling distance.

But as luck indulged in foul play in all our outings this time also we didn’t get a hotel booking. I was furious and solely blamed him for his lackadaisical attitude. Finally after our usual catfight we deliberated on Virginia Beach and we were lucky enough to get a room in Courtyard Marriott on the Oceanfront. Beaches are my husband’s first love. He simply loves the sea, ocean to put it rather correctly. Even I was looking forward for my date with the mighty Atlantic Ocean..

Next day we were all set to head to Virginia beach in our new vehicle packed up our bags including a flying disc and a ball. Though we had the GPS in the I phone we downloaded the exact route, time and distance to avoid any kind of confusion. It was a roughly 6-8 hour drive and I really cherished every bit of it even though in terrible back pain. In between we had our homemade vegetable pulao, paneer and raita. Both me and my husband our big foodies and we don’t ever miss hogging on good food. 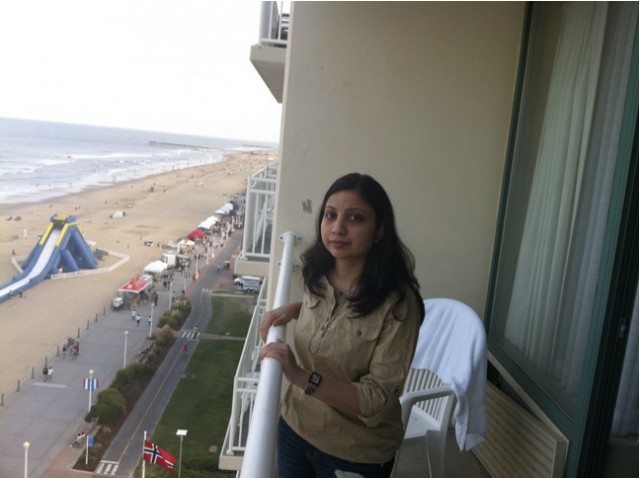 Beach view from the hotel

Roads were descent rather better compared to Myrtle Beach. At some point I was sleepy but pretended to him as if I am wide awake and hooked to every detail. Clear skies, scenic beauty, greenery on every side delighted me . Finally we arrived in our destination , a moment of exhilaration for me. Virginia Beach is a resort city with miles of beaches and hundreds of hotels, motels, and restaurants along its oceanfront. It is also home to several state parks, several long-protected beach areas, three military bases, a number of large corporations, two universities, Edgar Cayce’s Association for Research and Enlightenment, and numerous historic sites. 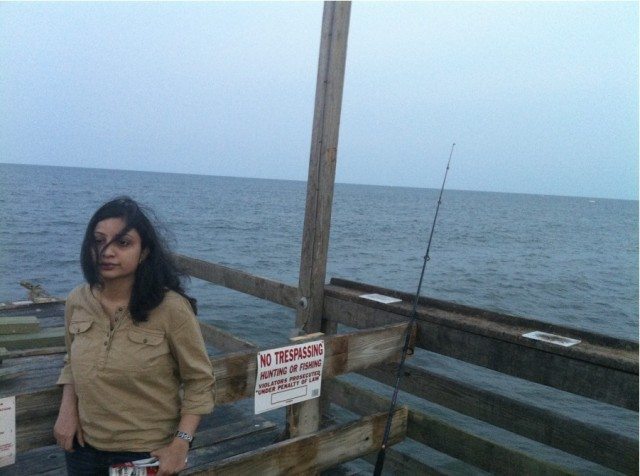 Our hotel was on the oceanfront and there was a big boardwalk . with refreshing ocean breezes and the sights and sounds of the beach lifted my spirits after a six long hour drive. I immediately unpacked and took a quick shower and dressed in my destroyed A & F jeans went for a walk with hubby dear. As we walked by I felt that it’s a perfect destination for the classic family beach vacation. The slow breeze caressed my hair . The weather was ideal and walking hand in hand with hubby posed a perfect romantic set up. Life felt so better in the midst of a horrendous back which I was undergoing at that point.

Food calling for me as I was quick enough to gorge on some Jamaican street food though it tasted awful but that’s the way I am always ready to experiment. The boardwalk was stretched at least till three miles and there was never a dull moment. While sauntering we saw a man painted with gold and bronze colour holding the US national flag and shaking hands and saluting to you the moment you go near him. With all my curiosity I went near him, shook hands with him and gave him a dollar as a token realizing that it went for The US army. 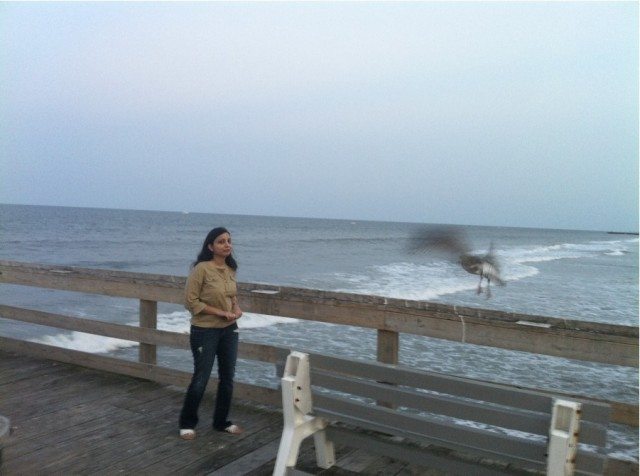 As we strolled along the boardwalk there were even a number of live acts going through. For those looking to enjoy quality fishing, there is also a great fishing pier located just off the boardwalk. I had never been to a fishing pier before so I was quick enough to go to that site and clicked some photos . The sight was breathtaking as I chased the birds sitting by. As I retreated I realised that there is something unique for everyone to enjoy along the path..

Next day I pestered my husband to indulge in some water sports . Though he loves water but he is terribly scared of some adventurous water sports. Me being opposite I love water sports and I really wanted to parasail and Jet Ski. It was an ordeal task for me to convince my husband as he was getting jittery about it. I ensured that we will sail together and there was nothing for him to worry. 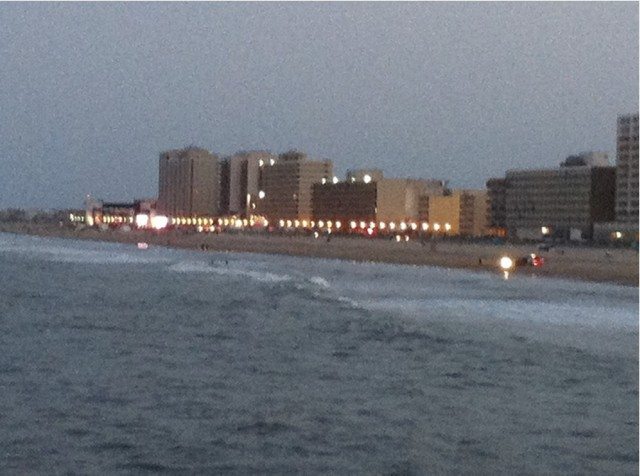 Rendezvous with the Atlantic Ocean

As we went on the boat I was thrilled about the idea of sailing over 400 ft on the Atlantic Ocean. I could see the nervousness on my hubby’s face. I tried to boost his spirits. The captain and the staff were amazing and friendly people. . They made us comfortable. They made us wear some jackets and then up we went. Though I had put a brave front but my heart was racing fast and then while I was on top I felt my time in the air so worthwhile. I was enjoying every moment of it, laughing out loud and humming old Bollywood songs. All the while he was quiet. I was awestruck by the panoramic view of the Virginia beach coastline while soaring in the sky. It was a wonderful experience , an affair to remember for all times to come.

Finally they slowed down just enough at one point to dunk us into the water and it was loads of fun. . As we were sailing back I could see the smile on my hubby’s face. For me it was a life time experience and these memories will never fade away. Straight from there we headed towards the beach as my husband was all charged up for a bath in the Atlantic Ocean. For two long hours we were inside the sea totally wet , the tide hitting us hard reminiscent of our good old summer vacations in Puri Beach . 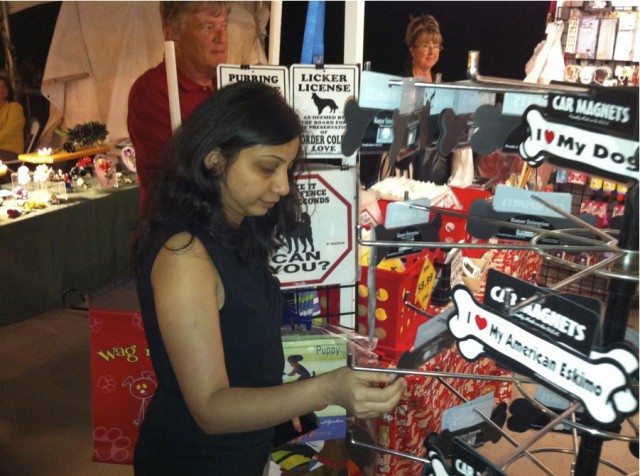 Evening was equally good. We again went for a stroll in the boardwalk. The ocean this time was calm and quiet. For dinner we zeroed in on an oceanfront restaurant. It was on a wooden platform, a perfect ambience on a moonlit night. On the backdrop of it there was a man playing live guitar with some countryside songs. The food was awesome. Everything about that restaurant was memorable. Amidst the ever changing sights sounds and majesty of the ocean the sky was suddenly dazzling and colourful with fireworks. The stretching sea of lights added to the magical aura and the sparkle truly breathtaking. My rendezvous with the boardwalk doesn’t end here. 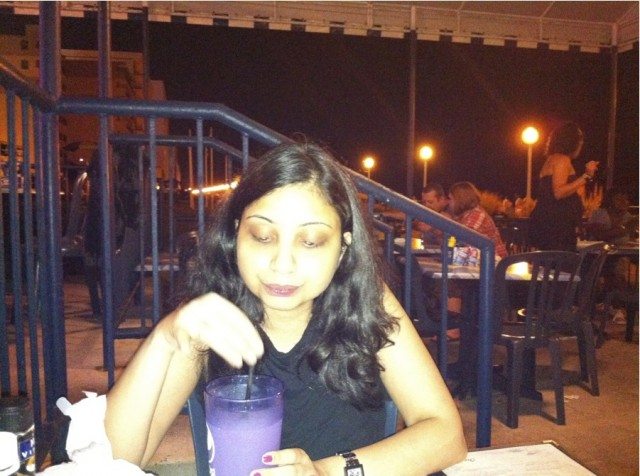 Sipping lemonade on the Oceanfront

The very next day I thought of riding a cycle rather a four seat surrey bike because I had never rode a cycle in my childhood. Hence this time I had to literally cajole my husband for a bicycle ride. Cycling the surrey was great fun . 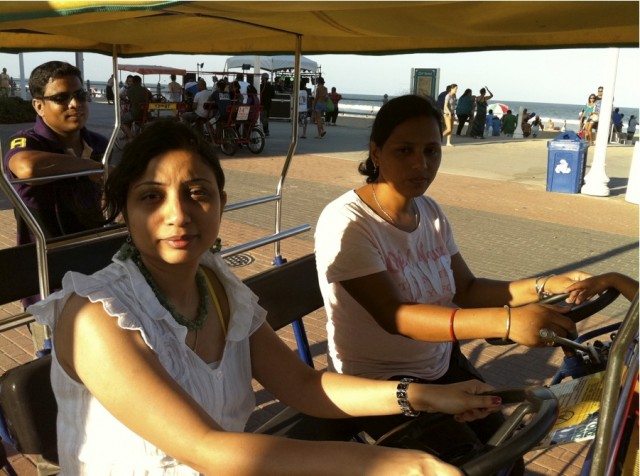 My maiden attempt to ride a surrey bike

Time was running out as our vacation was nearing an end. While coming back sweet memories of the place brought in a sense of freshness in me and a yearning to have more of the place. Though it was a short vacation but nonetheless it was truly meaningful as I had spent some quality time with my hubby as it is rightly said that Virginia is for lovers. Not to forget that a trip to Virginia Beach is incomplete without its quintessential Boardwalk

I am a person, who loves to travel read and make friends. Till 2011 I was with TIMES NOW (English News Channel).

The first tour is called “Golden Tour” and it consists of  pingvellir (spoken as thing – vetlir), Geysir and Gulfoss.  This Golden circle is a 5/ 6 hours journey by tourist buses, but it can actually take the whole day, if you are driving on your own, because tourist buses only stop at fixed places, but there are so many view points in the way that you need a full day to complete this circle.

So on a beautiful morning, after killing the cloud demon and freeing the Sun, we started our journey from Reykjavik and reached pingvellir… a distance of 40 Kms covered in one hour.  Pingvellir is the biggest valley in Europe and is on the banks of ping lake, again the biggest lake in Europe.