M turned up at our residence to say that he is on leave just as when we were busy packing our bags for Matiana, a village in Himachal Pradesh, 45 kilometres from capital Shimla. After hearing our plan, M decided to join us since he had, as he put it, “all the time in the world”. The wanderlust-stricken friend said that he knew the route criss-crossing the hill country of Himachal and a second driver will is always an advantage during such long drives.

So on June 6, 2010, we — M, K, K, S and myself — started our journey from our residence at Indirapuram, Ghaziabad. We crossed sweltering Delhi and by 8 am, we were on the smooth Delhi-Chandigarh highway. We stopped at Kurukshetra for breakfast. The open-air eatery offered sumptuous fare: delicious alu paranthas with dollops of white butter, fluffy omelets, toasted bread and sweet and salt lassi.

We hit the road after breakfast and crossed Panipat, reminding one of conquers and vanquished, Sonepat of its weavers and Ambala cantonment, closely associated with the lovable Kim of Rudyard Kipling. We reached Panchkula, in the outskirts of Chandigarh, by noon. At Kalka, a town in the foothills, past midday, when shadows were shortest, the hills became visible. Just as the climb started, we stopped at another small charming eatery for 45 minutes to refuel. The copper-coloured apple drink and simple vegetarian lunch rejuvenated us.

As the climb started, we soaked in the changing foliage and the stunning view: the trees of the plains have now been replaced by tall pine and oak. A black-faced langur family sat below a ridge, carefully monitoring the passing vehicles while a kite flew by. I wondered what were the green hills like before the towns were established.

After sometime, we crossed Shimla, once the queen of the hills and associated with Indian and British royalty, artists like Amrita Shergill and the royal sport, polo. Driving past the Cecil, an Oberoi property, in lower Shimla, Lakkar bazaar, we saw many new hotels that have come up: glass, chrome upstarts, incongruous with the rock and alpine vegetation of the hills. The 45-kilometer drive from Shimla to Matiana was marked by heavy traffic congestion. We crossed Kufri and Mashobra on our way and around 6 pm reached our destination, Krish Rauni Resorts in Matiana (http://krishrauniresort.in/). 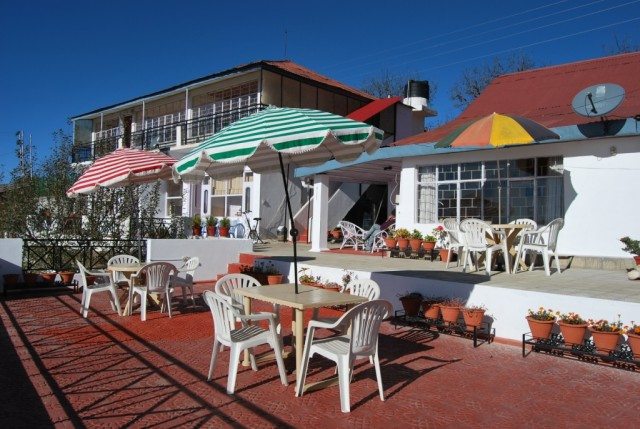 The front porch of the resort

The resort is the ancestral home of the Kishore family and is now run as a homestay by the couple. To enter the guesthouse from the back lane, one has to negotiate a thin strip of mud road with no railing on the gorge side. This could be a bit unnerving for many. However, by now, as I write this a year later, it must have been fixed. 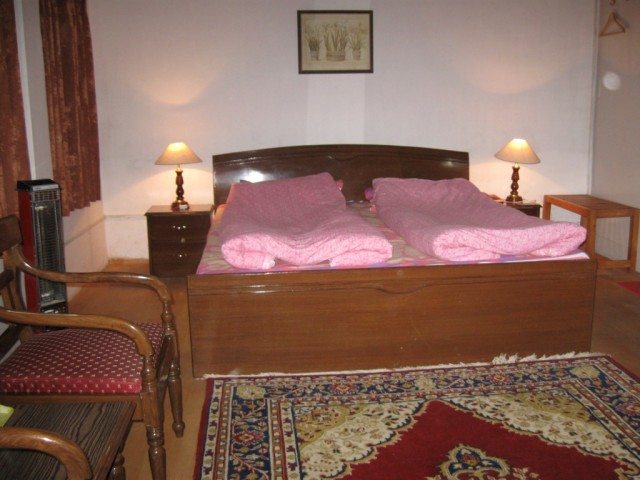 One of the rooms 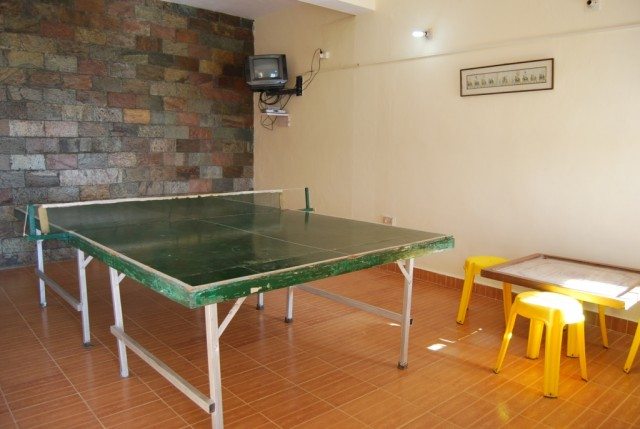 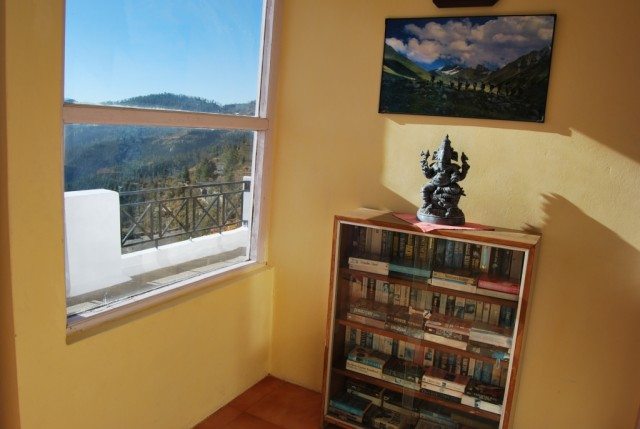 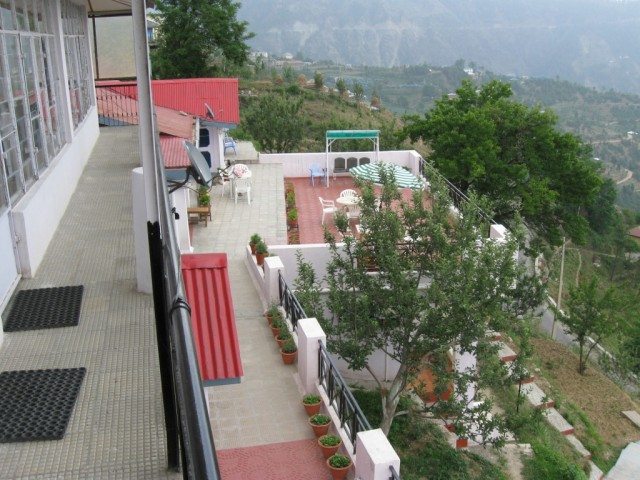 View from our rooms

The homestay has eight rooms, all tastefully decorated with attached bathrooms. There is an activity and TV room also. We took three rooms on the second floor and from our private balcony we could see a beautiful valley and the winding Hindustan-Tibet road. Our rooms were well furnished, comfortable and clean. Behind the main building is a huge apple orchard with more than 200 trees. The frontage has a steeped garden with apple, peach and apricot trees; I could stretch my arms to pluck a fruit. The hosts know the area very well and we had long discussions about the seasons and the apple plucking season. 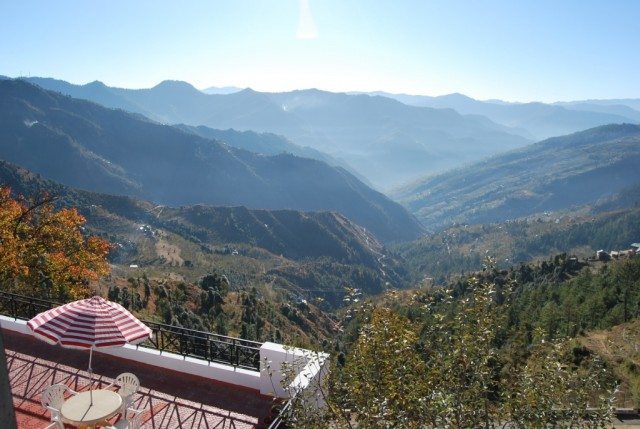 Valley view from the porch 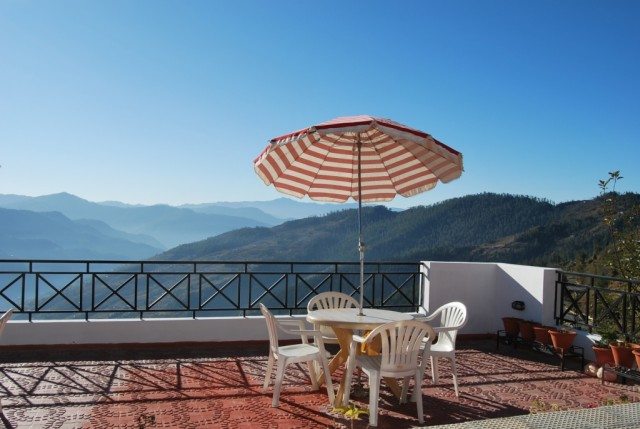 The next morning was a glorious summer day. We enjoyed a heavy breakfast sitting in the terrace under a huge garden umbrella, enjoying the mountains. We spent the afternoon talking to the couple, listening to the local history of the hills, of an American missionary called Samuel Stokes (http://en.wikipedia.org/wiki/Satyananda_Stokes) who started apple orchards in the area, studied Buddhism and later married a local girl. Later, in the evening, we went out for a soul-nourishing walk.

Next morning, we drove to Narkanda, 15 kilometer from Matiana, a market town that specializes in cherry, apricot and other local fruits. Past the market, we drove down to Hatu top (http://www.indiatravelite.com/himachalpradesh/hatunarkanda.htm) for a 360 degree view of the gorgeous Himalayas. There is also a temple up there, worshipped by the locals. It was a Sunday and the sliver of a road leading to the mountain top was completely crammed with cars and bikes. After spending considerable amount of time trying to negotiate our way up to the temple, we gave up. However, we did get a glimpse of few of the peaks from another vantage point thanks to the powerful binoculars provided by our hosts.

Next morning, we decided to walk down a mountain road. We walked through a village in the neighbourhood of Matiana, past apple farms and a Shiva temple. We could not retrain ourselves from picking white and mustard-coloured flowers blooming between long blade of grass and fern-covered rocks. I picked up a small branch of birch for memory sake. It was a dream walk, which I will cherish forever. 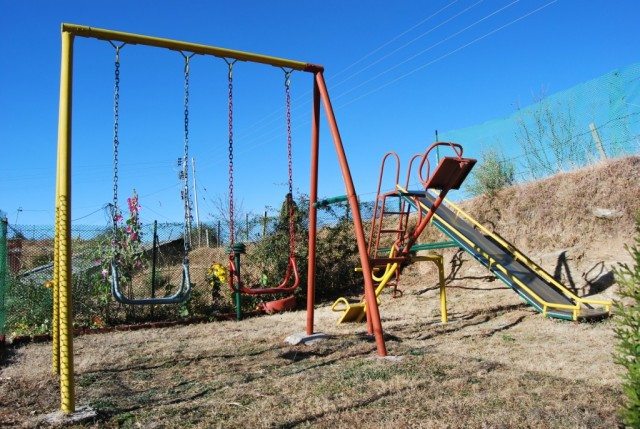 Matiana is a simple, pleasant and a peaceful place. It’s a must-go.

Matiana: A Walk in the Clouds was last modified: April 21st, 2020 by Sucheta

Sucheta Dasgupta is a housewife based in Calcutta. She loves reading and travelling. These days, she is busy learning German and writing short stories for children.