The long road journey from Bangkok to Siem Reap and the hectic first day were bound to take toll on our energy levels. But come next morning, everyone was fresh and ready to go for our next venture in this wonderland called Cambodia.

The Angkor kings of Cambodia came in power in 9’th century AD. These kings built several monuments over next 5-6 centuries, dotting the area which we see today. The monuments range from small shrines to huge temples and sometimes even the entire city. Jayavarman VII , one of the prominent Angkor king established a city called ‘Angkor Thom’ in the vicinity of Angkor Wat. It is a quadrangular piece of land bound by moat representing the milk ocean. The four city gates at four cardinal directions are adorned with gods and demons busy in Samudra Manthan and the center of this universe is the great temple of Bayon.

The monuments of Bayon and the Angkor Thom gates exhibit a distinct architectural style. Huge human faces are sculpted on the all the shikhar strucutres generally called as face towers. 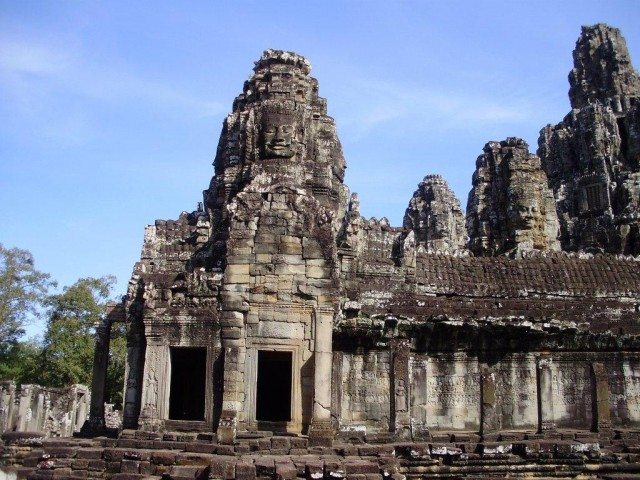 Bayon temple is a collection of such 54 face towers, representing 54 important cities in the reign of Jayavarman VII. This is one massive structures, rectangular and multi leveled, one could get lost in the enclosures created by several face towers, some of them ruined and some still very erect. Almost every face depicted is different, myth being that the faces belong to the king himself. Bayon is a Buddhist temple built just about 50 years after the great work of Vaishnav temple of Angkor Wat. 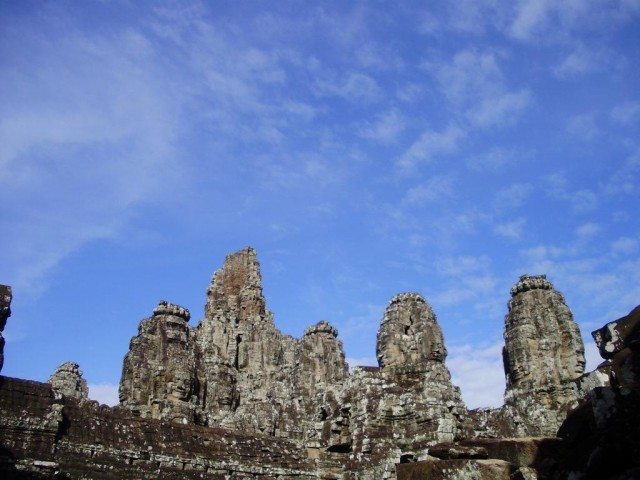 The outer walls of Bayon temple are adorned with beautiful carvings representing daily life of the citizens.
Here you see processions, prayers, people worshipping ‘shivling’, cock fights, animals, a pig being roasted and the omnipresent apsaras dancing, it covers the entire spectrum of life. 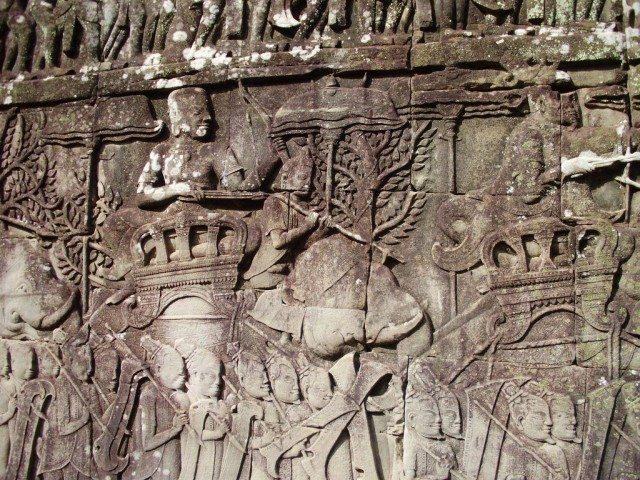 All the carvings over here and in Angkor Wat as well as at several other monuments are done in bas-relief. These are done in such a way that the images can be seen only halfway as they are elevated from their background. All of us who are used to see Indian carvings done in full relief which shows the sculptures completely do not get easily impressed with the carvings. However as you see them, the intricacy and the scale just amazes you. 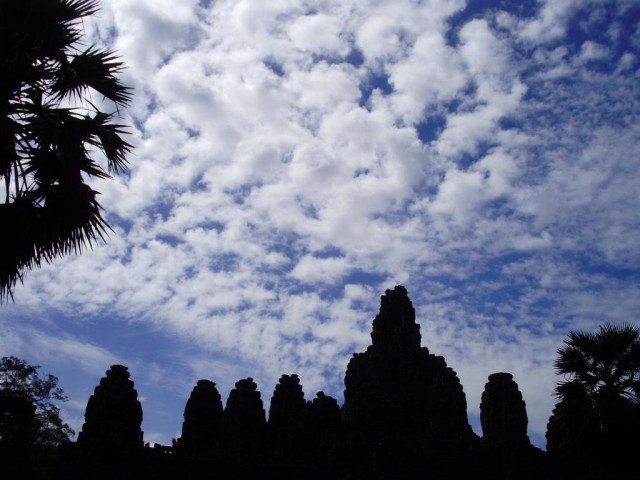 Leaving Bayon behind , looking regal on the backdrop of blue sky and blazing sun, we found our way through two of the grand monuments within the city of Bayon. One of them is Bapuon. It is a temple of immense proportions and it is a feat in architecture as well. The front side of the temple is similar to any other temple, with steep steps, multi levels and closed galleries. However as you pass the back side of this temple, what you a see is an image of Reclining Buddha covering the entire width of this temple which is nearly 120 mtrs. The style of carving is similar to that of face tower, spanning across several stone slabs. This temple is being restored, and when it would be done completely it will be a great attraction of Cambodia for sure. 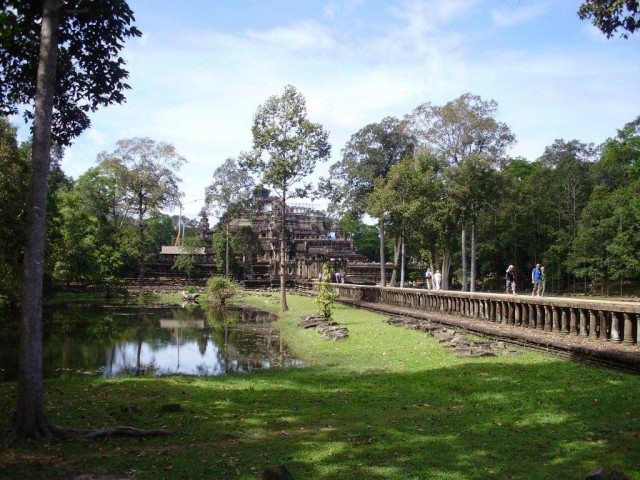 The next stop was Phimeanakas, a royal palace. Though the place did not look like any royal palace, it was definitely one impressive spot. A very steep stepped structure, rectangular at the bottom and going a few meters high, had enclosed walkway on four sides, and still one more flight of steps to reach the uppermost sanctum. If this is a palace then I immediately felt sorry for the royal assistants, who would have to climb up and down those scary steps.

Most of the monument in Angkor exhibit this ‘vertical’ architectural tendency. This is primarily because the place of worship or even residence of the king is treated like a Meru Parvat which is the abode of the gods and hence the fascination of the vertically swooping structures. It will be interesting to note here that the Angkor kings believed that they had part of God in them, in fact they represented ‘Gods’ on earth. This is known as ‘DevaRaja’ cult in Angkor history. A temple would be built for the king’s worshipping deity mostly the Shivling during his reign. After the king’s demise, this temple would belong to the God-King and the king would also get a new title ( e.g. Jayavarman II got title of Parameshwar). After death, the king reunites with it’s celestial Godly being was the prevalent belief. That is also the reason why we see a very high density of temples in this area. 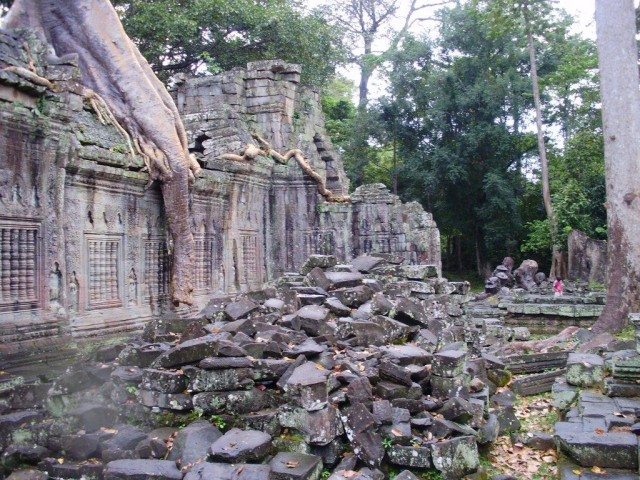 Next destination welcomed us with torrential rains. After optimally solving the problem of ‘how-to-utilize-less-number-of-umbrellas-by-more-number-of-people-with-least-number-of-turnarounds’, all of us managed to reach the stone platform of the temple of Preah Khan. I must say we were not prepared to what enfolded slowly in front of us as we moved from one door frame to another. 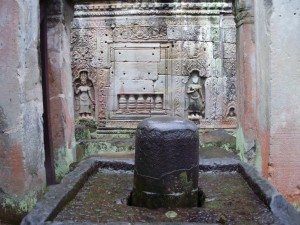 This was like a long long line of adjacent temples connected with each other, flanked by enormous ruins of even bigger structures now collapsed with a deserted, lonely and forested look. Each doorframe complete with a chandrashila ( decorative step before and after the stepping stone), leading into quadrangular enclosure with side wings opening into corridors leading to outside structures, the closed sanctums sometimes blessed with a Shiv ling, or an idol or just a block carved to hold an idol.
Almost forty doors, we crossed each one of them with fascination, the atmosphere more mystic by the drizzle, looking around and above and ahead wanting to know if this journey would ever end, our mind stunned by the huge stone slabs fallen down all around, and the green jungle almost waiting to cave in. Only a few years back it was a living, breathing place, a monastery , a place of worship, housing thousands of students. But today it is nothing but ruins, desolate and devastated. 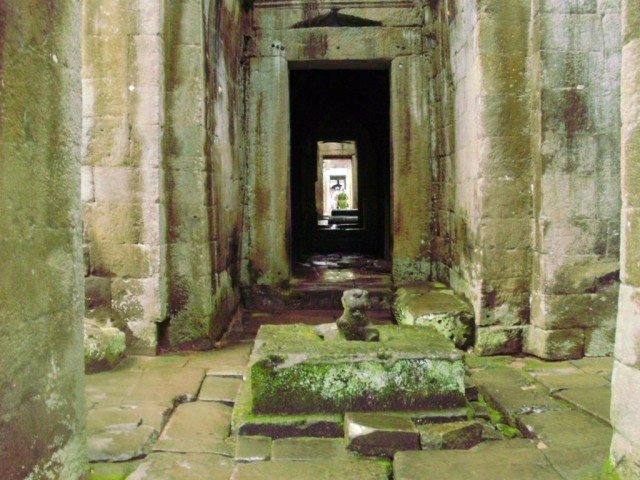 Though similar to Ta Prohm, Preah Khan was definitely the most mesmerizing of the monuments for me for it’s grandeur and it’s emptiness.

It took the bright, joyous waters of Neak Pean to take away the impact of the doomed Preah Khan from our minds. Neak Pean originally a royal Hindu site, representing the sacred Himalayan lake of ‘Anavtapta’, later got converted into Buddhist shrine. It is small temple tower in the middle of a round man-made lake. There are four more adjoining smaller lakes close to the main lake. The main structure in the middle island has a statue of Lokeshwara. This island is surrounded by four separate animal structures of horse, lion, elephant and bull. Out of which now only the horse survives.

The lake water was calm, sparkling in the golden dusk and reflections in the water added magic to the charm of the place. 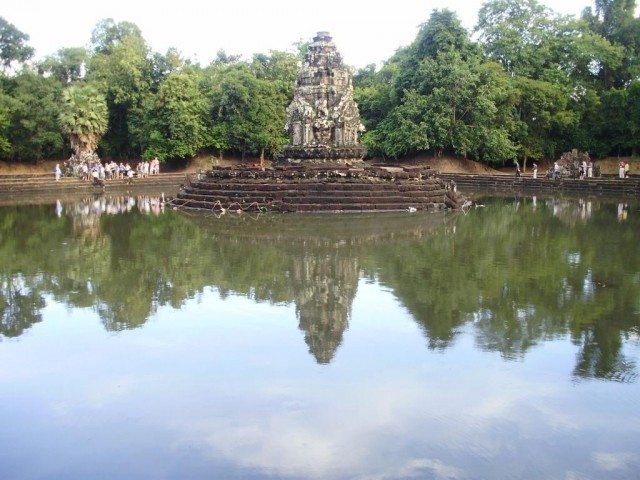 Angkor was slowly but definitely growing on us, capturing our imagination and finding a permanent place in our minds…