We started our journey to Salasar Balaji from Mehndipur Balaji, another famous place of worship of Lord Hanuman. The driving condition was excellent as the highway connecting Mehndipur to Jaipur was flawless with few small markets coming in the way. The distance between two places was around 70 km and took around two hours with a small tea break.

From Jaipur we took NH-11 alternatively known as sikar road via Jhotwara- Chomu- Govindgarh-Ringas-Salasar. To our surprise there was no toll in the entire stretch. Though the work on highway was going on and soon it will become more functional.

First we thought to took more advantage of our journey and tried a detour to Khatu-Shyam Ji temple, but our effort was in vain as we reached there by 2 o’clock in the noon and the god was already gone for an afternoon nap after closing the gate. It puts a kind of pressure on us as we have lost around two hours and compelled to drive through some inner parts of the road instead of NH 11. Finally we hit the highway at a point where the straight road leads to Salasar Balaji.

This leg of the journey left us amused as the landscape was completely barren and deserted.  There were trees with no leaves, giving the feel of a haunted destination. The road was in bad condition and it took us nearly two hours to reach the temple. 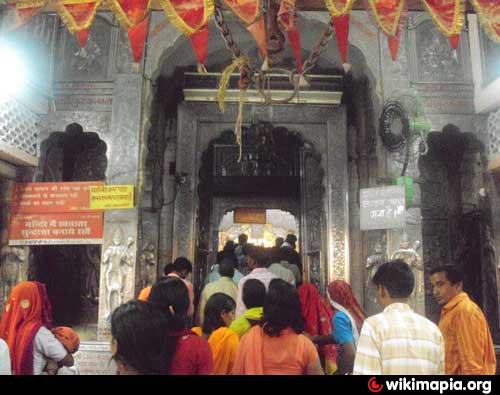 Long time ago a farmer was ploughing his field in a small village Asota in district Nagaur (Rajsthan). All of sudden the plough was hit by an Idol covered with sand. His wife, who reached their with his lunch cleaned the idol with her sari. That the idol Balaji i.e. Lord Hanuman was appeared. The news of the appearance of Lord Balaji spread in the village Asota immediately. The Thakur of Asota also heard the news. In the dream. Balaji ordered him to send the idol to Salasar in the Churu district. In the same night a devotee of Lord Hanuman, Mean Das of Salasar saw Lord Hanuman or Balaji in a dream. Lord Balaji told him about the idol of asota. He immediately sends a message to Thakur of Asota. The Thakur became surprised with this incident, and considering it as a blessing of Lord Balaji, the idol sent to Salasar and was fixed there. That is now Salasar Dham. 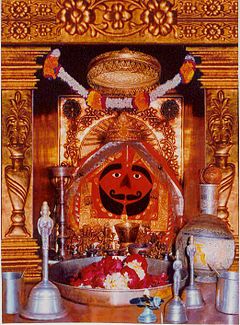 The Salasar Balaji Temple was like an oasis in the desert. After a long tiring journey when we reached the temple we felt so good that the tiredness was almost gone. There was several parking very near to the temple. You can carry your footwear to the temple as there was in-house provision of depositing it within the premise.

The Prasad can also be purchased from the shop inside the temple premise or from the several sweet shops around the temple.

The unique thing that I found about this temple was its circulatory path which was covered entirely with gold and silver. Photography of the core temple area was not allowed.

There is a holy fire lit by Mohandas Maharaj is still burning. The devotees consider the holy ashes called ‘Vibhuti’ as sacred and eating a bit of it is believed to cure diseases. Some take it back home believing it to bring good luck and prosperity.

Of many rituals and traditions performed at the temple, the most widely followed is the tying of coconuts with ‘moli’ (sacred red threads) in the temple premises.

Also, an interesting ceremony known as ‘Jadula’ in which a child’s hair is shaven for the first time takes place here.

Like most of the pilgrim centers in India, the temple of Salasar Balaji too, is surrounded by bustling market selling variety of foods and other souvenirs. Just outside the temple there were options of street foods like ‘Pao-Bhaji’, Noodles, Burger etc.  Sweet shops were selling almost everything which can be found commonly in any north Indian marketplace. One thing that I liked particularly was the ‘kachauri’ that is somehow larger in size than we used to have in Delhi, UP or Haryana the other north Indian states, a specialty of Rajasthan. Like other devotees we stroll around for some time, buying things, and just getting a feel of the place. Around 7 in the evening we started our journey to Delhi with the heart filled with joy and devotion.

I am an avid traveler, complete foodie, a movie buff and last but not least a book worm. I work in a news channel as Promo Producer. Living in NCR and have dream to live all my passion till the last breath of my life. Being restless is my way of relaxation. If I am idle then it kills me. Traveling is something which excites me a lot. Exploring unknown destinations, meeting new people, authentic food...all seems to like an achievement. Let the journey begin...