Why Lakshadweep? Apart from being one of the most beautiful islands in India, a documentary on discovery channel, which I saw during my college days, was also a very strong triggering point for this choice. The way it was filmed under water, showing the colorful world inside, it was more than enough to fascinate the young soul to go there someday and check that magical world myself. When we were planning our trip this year, choices were Andaman or Lakshadweep, and without much deliberation we settled with later. But planning to go there is an important part of travel, as Lakshadweep is a kind of tourist place, where you can’t go unplanned, literally.

The tiniest Union Territory (UT) in India ‘Lakshadweep’ means ‘hundred thousand islands’ in Malayalam language. It consists of 36 islands (out of which only 10 are inhabited) 12 atolls, 3 reefs and 5 submerged banks. Lakshadweep is situated off India’s west coast in the Arabian Sea and surrounded by approx. 4,200 sq km of lagoon, rich in marine wealth. -Information taken from various sources.
It is said to be a part of the same geographical chain as the Maldives, this is why I referred it as the India’s own Maldives in the title of this log.

Lots of efforts are being done by administration to protect the extremely fragile ecosystem of these islands. Almost all tourism activities, from staying options to water sports are under the control of a nodal agency ‘The Society for Promotion of Nature Tourism and Sports (SPORTS). Everyone, Indian or foreign national, requires a special permit to visit Lakshadweep. The airline would not let you board the flight, until you submit a copy of permit to them. Moreover, confirmed hotel/guest house is also a must have before visiting this Island due very limited choices available, and usually all of them are pre-booked. The easiest way to obtain the permit is to book a package tour through SPORTS. They offer variety of tour packages of various durations and budgets. Since my husband (who works with central Govt.) has a colleague in Lakshadweep administration, we decided not to go through SPORTS and plan the customized trip on our own with help from him. The first step was to apply for permits for all family members (Me, husband, mother, father and daughter). It took a while (around a month) to get permits after submission of all required documents. Our trip in Lakshadweep was for four nights and five days. For stay, we managed to get state’s Guest houses in Agatti and Kavaratti islands two nights each, with the colleague’s help. Phew!!! Major work done!!

Now, little more Gyaan on Lakshadweep based on our experience here. Kavaratti is the capital of this UT and most developed island among all. Other habitant islands are Agatti, Amini, Andrott, Bitra, Chetlat, Kadmat, Kalpeni, Kiltan and Minicoy. Agatti is the only Airport here (and most beautiful airport in India too I am sure, see the picture below). Among inhabitant islands, few like Bangaram and Thinakara are open for tourists for day tours and overnight stays. Foreigners and liquor both are not allowed anywhere in Lakshadweep except Bangaram island. Majority of locals are Muslim fishermen or coconut cultivators. Local language is Malayalam and local cuisine is similar to Kerala’s, though vegetarian food options are very limited. December to Feb is the best time to visit this place, for the remaining part of the year, days are terribly hot. Corals are the main attraction of Lakshadweep, but picking them up or try to take them out of island is a punishable crime. So, resist the urge to collect corals as souvenirs.

There are no direct flights to Agatti from Delhi or for that matter from anywhere in India, except Kochi. So we reached Bangalore late in the night stayed overnight and caught the morning Air India flight (the only operator on this route, and has daily morning flights) to Agatti, which took a halt at Kochi for about an hour. Agatti Island is nothing but a long narrow strip of land of about 6.5 km among turquoise lagoon water of Arabian Sea, which makes it most suitable island to build an airport. The small aircraft landed at Agatti Airport, we came out from the gate and..….the view was mesmerizing. We could not take the stairs down until airhostess asked us to move. The whole scene was just breathtaking. 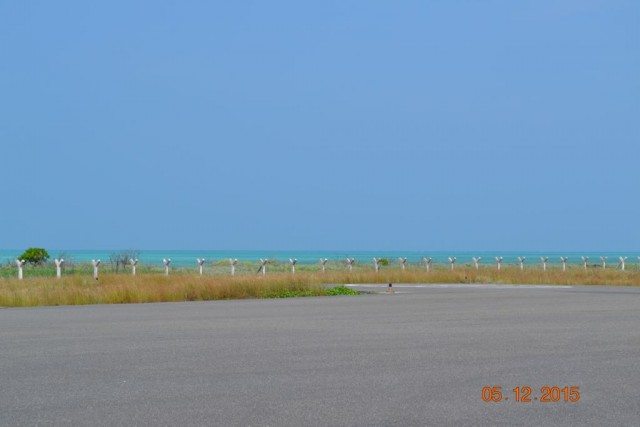 I am sure; the first introduction to Lakshadweep must have this effect on everyone coming here, so airport staff is well trained to direct passengers quickly towards arrival section of the airport building, at least the runway can be spared from photography this way. It is the smallest airport I have seen so far. The arrival section was a just a hall, which had some 10-12 chairs. Yes, there was a big map of the Lakshadweep too, I immediately took a picture. When I was a student, Lakshadweep in India’s Map always seems like few little dots in Arabian Sea near Kerala, but they are actually 36 islands, where thousands of people live. Though, in this national Map of Lakshadweep, only Major inhabited Islands are visible. 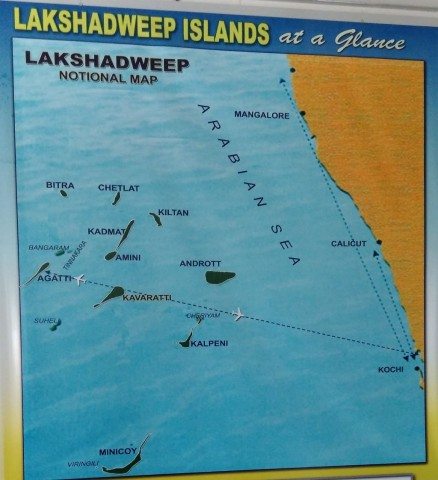 From Airport, we took a taxi to our guest house, which is situated at distance of 2 km. As per the taxi driver, there are only few cars on the island, most of the people either own bicycles or bikes for the domestic use and auto rickshaws are used for public transport. We had our lunch and planned to take some rest, but in actual, we all were eager to explore the island. Finally, around 4 PM we took out our DSLR and started the evening stroll. The whole island is covered with the shadow of coconut trees. There was a main concrete road (you can call it a highway) in the middle of the island apart from few connecting narrow roads. Besides the main road; there were huts and houses, followed by clean white sand beaches on both the sides of the Island. Sea was accessible on the both sides at the turn of your head. I took a panorama to capture this unique feature of the Agatti Island.

Huge piles of coconuts, goats and chickens can be found in almost every household of Agatti. These are also the staple food here. We started our walk from the west side beach, to cover the sun set. We reached to the beach in approx. 20-25 steps from our guest house. What a spectacular view!! 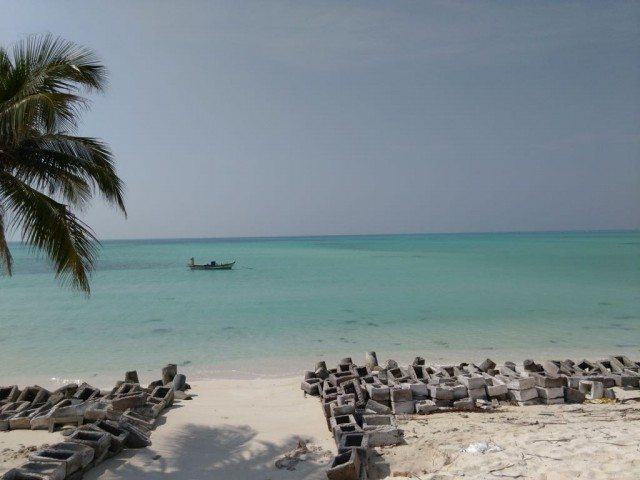 We met lots of local kids, who were busy in either taking sea bath or playing on the beach. Although they do not understand Hindi at all and I was clueless about Malayalam, we manage somehow with broken English. They all were keen to know our names, where we came from and getting their pictures clicked. We enjoyed this brief conversation. We were delighted to see happy faces all around. Local people of Agatti have this culture of winding up their work by early evening thereafter they all (including men, women and kids) come and sit at the beach till sunset. Men and women were chatting in their respective groups and kids were playing and having fun. This is the advantage of having less resources and low connectivity with the rest of world. No one is mad rushing anywhere but living life, may be not that convenient but a lively life. 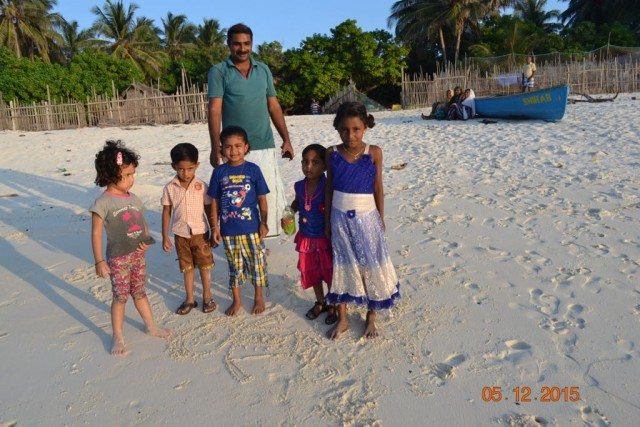 By the time we were about to reach at the end of the island, it was the time for sun set. The sunset was beautiful, we enjoyed sitting on the lovely beach with local people.

It was getting dark and we were few kilometer away from our guest house. Our parents were not in position to walk back, so we decided to take an auto and reached to our place. After having freshly made all vegetarian meal at our guest house, we headed for post-dinner walk and spotted a place, where we could see the big black sky full of starts amidst coconut trees tops. The cherry on the cake was the roar of sea waves coming from absolute dark. It was an inimitable experience.

During our stay in Lakshadweep, we did not miss even a single sunrise and sunset for all four days. In fact, they were so magical, that it was difficult to lose any one of them. We used to get up early for long morning walks along with beach and reached at beach in the evening before the sunset to absorb the maximum beauty of this Island. 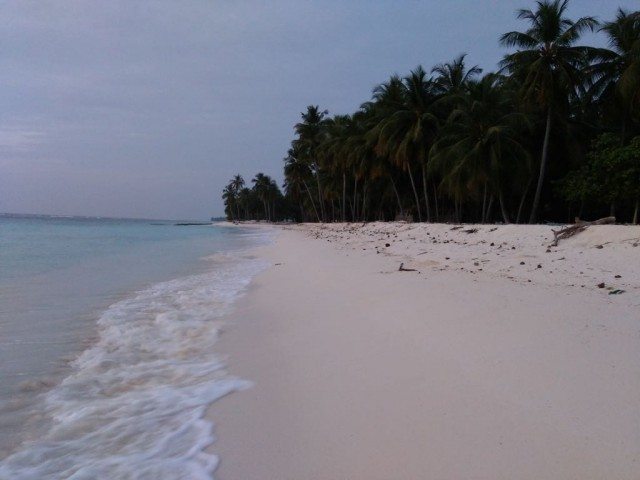 Next day, we visited Bangaram and Thinakara Islands, which is cover in the next part. I would be very happy to answer any questions which you might have on Lakshadweep.

Being an avid traveler, there are many destinations that are in my wish-list. Tibet, Bhutan, Gangtok, Rann of Kuch are some of the places…