Our first day of New Year began with the traveling to Dehradun. As Dehradun is our home town,most part of our vacations are spent in Dehradun only either visiting relative’s places there or taking a halt to explore Uttaranchal’s Hill stations. This time we decided to visit all the places of Dehradun which we have not visited till now. Some of the places were really not visited by us even if we are the regular visitors to this place. So through this post I want to give you the detailed information about the places which are less explored by the visitors.

This series of the post is included those places also which were visited by us earlier too except Rajaji National Park.All the worth visiting places of Dehra Dun can be divided into four routes.Giving the information about the first route and rest of the routes will be covered in the forthcoming posts. 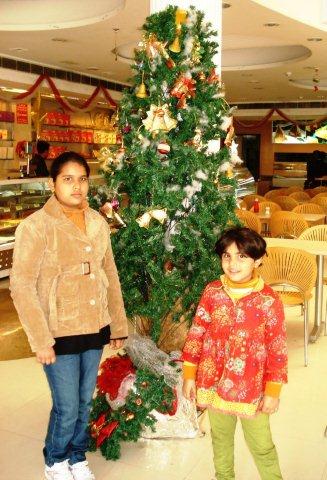 On the way to Dehradun

Dehradun is the capital of Uttrakhand , it is located at 230 kms from Delhi. Dehradun is surrounded by the Himalayas in the north , Shivalik Hills in the south , the river Ganga in East & river Yamuna in the west.

“Dera” means “Camp” & “doon” means “valley”. According to the legend Guru Ramrai , the seventh Guru of Sikh set up a dera (Camp) here , the place is very close to Dehradun Railway station. Some people relate it with Guru Dhronacharaya also.

A Brief History of Uttrakhand / Dehradun at a glance

• Uttrakhand was ruled by Kuninda Kingdom in around 200 BC.
• Later this region came under Katyuria’s.
• After the end of Katyuria’s rule, the region was divided into Kumaon which was ruled by Chand king & Garhwal by Panwar.
• In 1724 Hyderabad Nizam established Kumaon Regiment.
• For about two decades till 1815 it was under the Gorkhas.
• In 1815 Tehri Garhwal was established.
• In 1816 Except Tehri Garhwal , Uttrakhand was declared as non regulatory state & Tehri was handed over to King Sudarshan Shah.
• In 1857 Muncipal Corporation of Dehradun was formed.
• In 1859 King Sudarshan Shah died.
• The Forest research Institute (FRI) was established in 1906 by the British.
• In 1919, Narendra Shah shifted the capital from Tehri to a new town, which was named after him, Narendra Nagar.
• In 1930 Dehradun Radio Station started functioning which was closed during II World war.
• The IMA was established in 1932 by the British only.
• Manvendra Shah was the last ruling King of Garhwal Kingdom (1946–1948).

Route 01 – On this route one can cover the following places:-

1. Lacchi wala :– It is about 22 kms from Dehradun on Haridwar /Rishikesh road. It comes under the forest reserve area , Forest rest house is also available for the tourists. It is an ideal place for picnic, especially in summers as one can enjoy the surroundings near the water body as well as have a splash in pool or river. 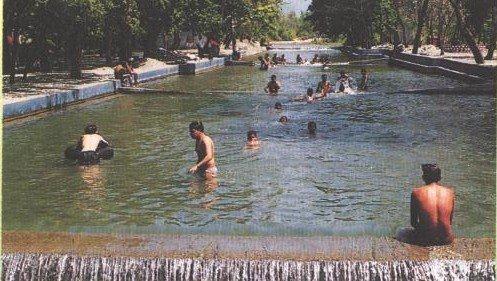 2. Lakshman Siddh :- It is situated 12 kms away from Dehradun City on Haridwar / Rishikesh Road. It is believed that Lakshman had penance (Tapasiya) for killing the Ravana , hence this place is known as Lakshman Siddh. 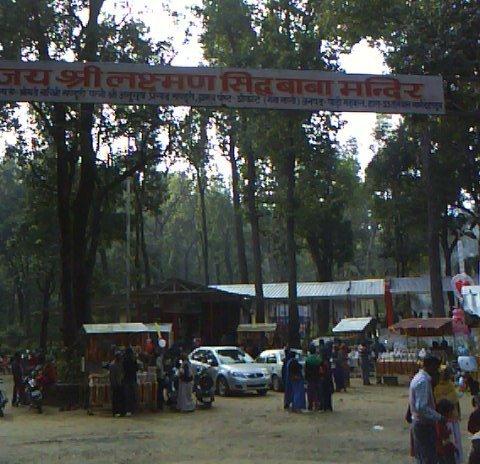 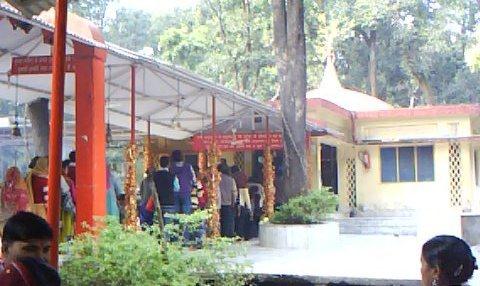 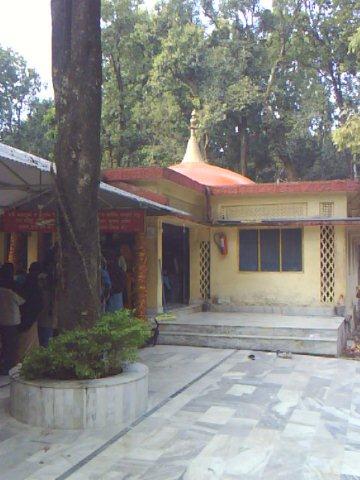 One can spend hours in the calmness of silence. The temple is surrounded by forest. 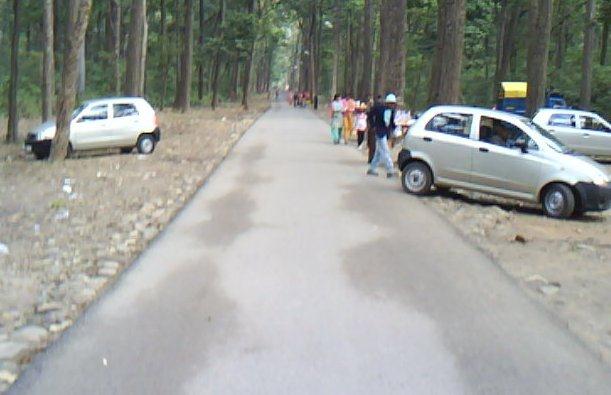 There is Akhand Dhuni where ever day Hawan is performed. Two Rudraksh trees are also there. 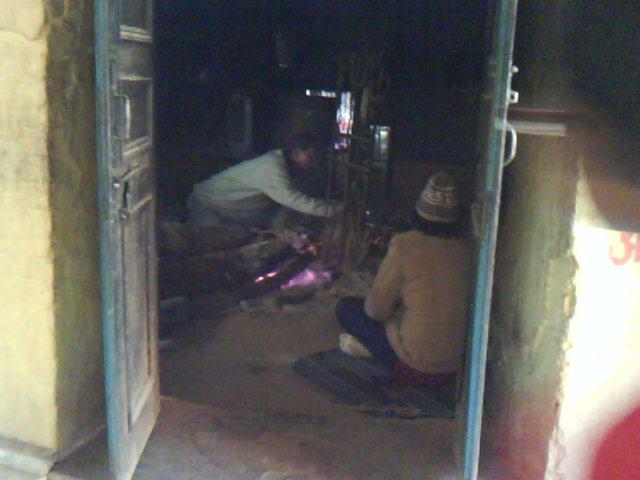 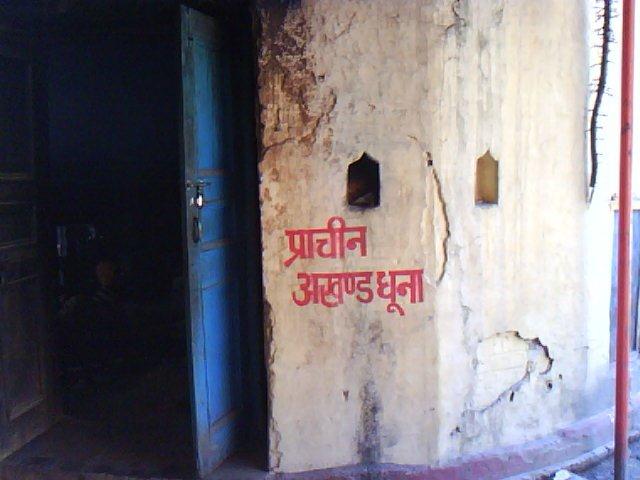 The main Prasad of the temple is Jaggery . In every last Sunday of April the temple committee conducts a huge Bhandara.

3. Sahastradhara :- It means “thousand fold springs” an ideal place for picnic. There are three caves known as Shiva Cave , Parvati Cave & Inderesh Cave opposite to Baldi river. The way to Shiva’s cave is very slippery. 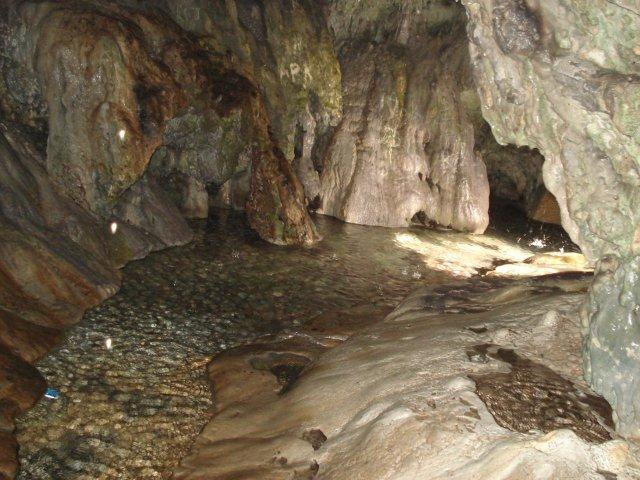 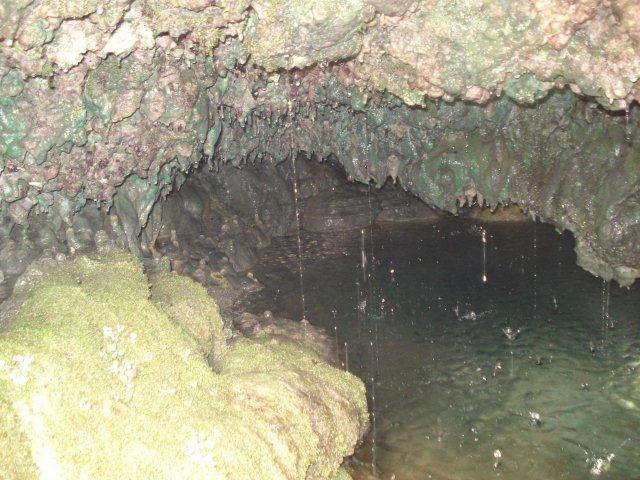 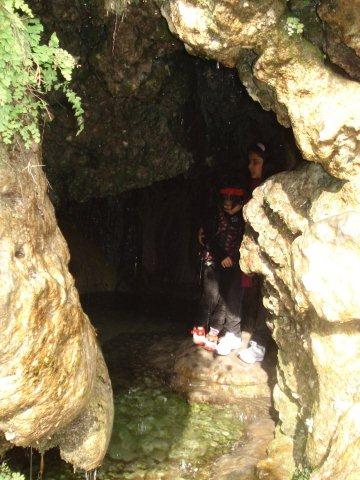 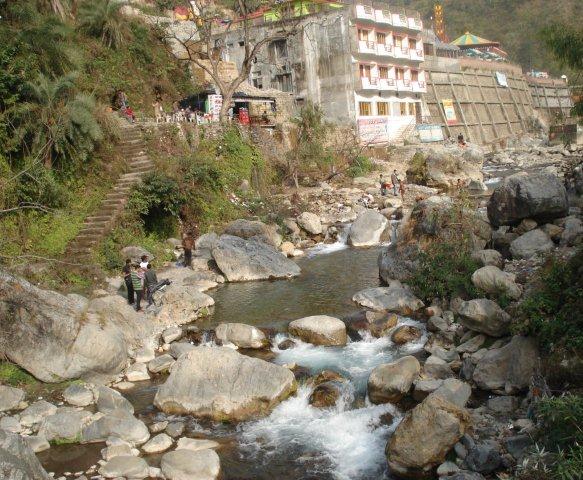 It is also famous for Cold sulphure springs where visitor take bath which helps in curing the skin infection. It contains Medicated / Therapeutic properties. 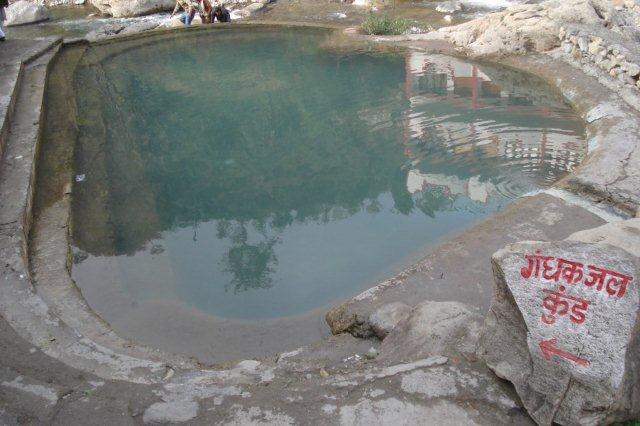 It can be visited at any time but the best time to visit is during rainy season when the streams appear of a gushing torrent. 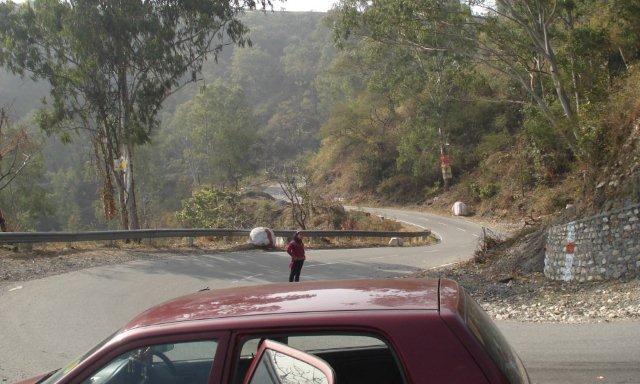 4. Tapovan :- There is a Dronacharya Ashram. According to legend Dronacharya had done penance here. The ambience in and around this holy place is so divine that it sooths all the sorrow. 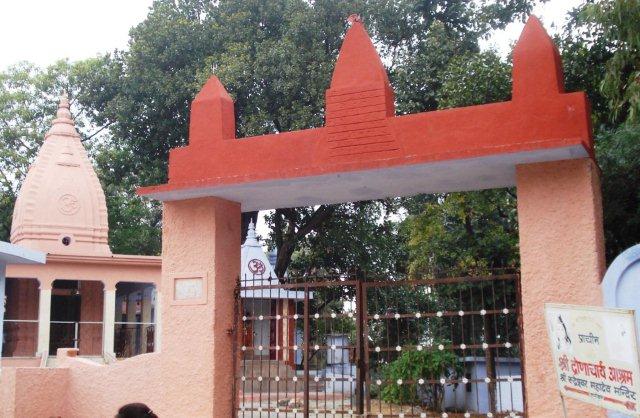 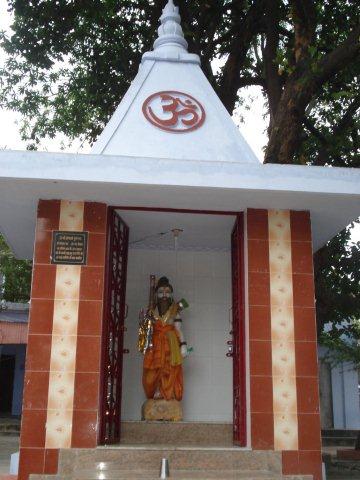 Tapovan - Dronacharya temple inside the ashram 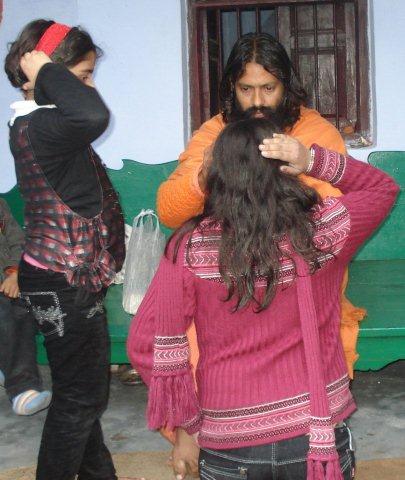 5. Kalinga war Memorial :- It is the only martyr memorial of its kind in history where victorious army built the memorial on the bank of river Rispana in memory of General GILASPY with other army men as well as Gorkha General BALBHADRA THAPA their adversary to pay tribute to their courage jointly. 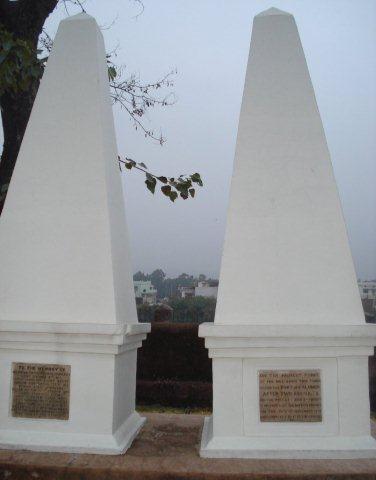 6. Kalinga Fort :- Kalinga fort was known as Nalapani fort also. In 1814 the battle of Nalapani which took place between Gorkha Army & British Army. In this battle women & childen joined hand in fighting along with the Ghorkha Army against British Army. The British general GILASPY lost his life on 31st oct. 1814 with fellow military men. The most of the fort part was damaged during the war , gradually it was damaged. The only left over thing is a broken Trishul. Now a new monument has been built by authorities. 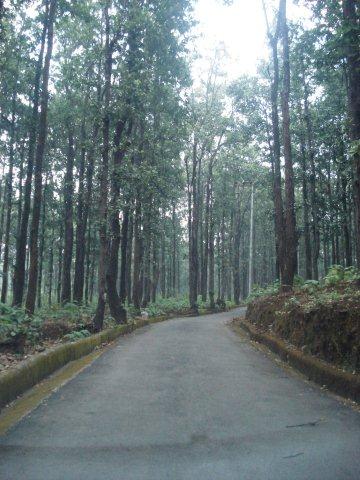 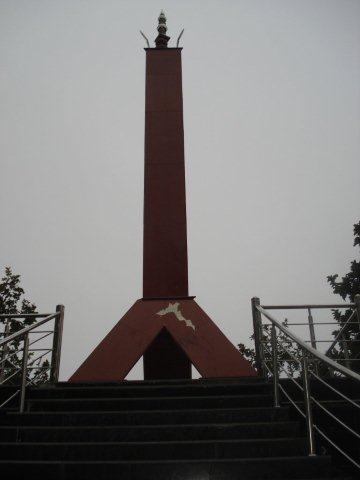 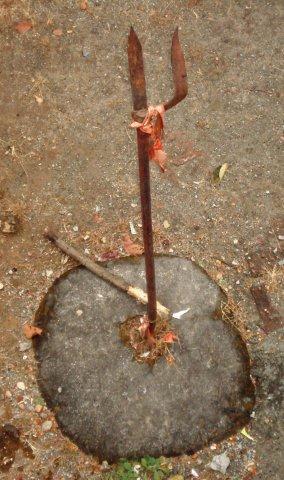 Kalinga Fort -- only left over thing is a broken Trishul 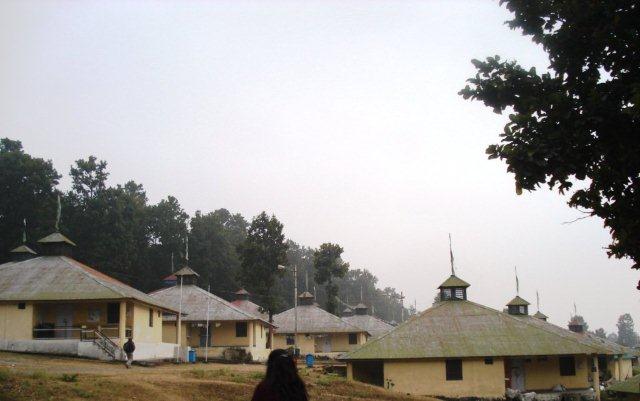 Tibten Settlment colony at Nalapani , on the way to Kalinga Fort

Any suggestion or queries for the rest of the forthcoming posts are welcome.

As we entered the mountainous terrain, I observed the colour of the flowing river on our left – so different than the rivers we were used to see during this ride!
Out first break of the day was at Rumtse, the same hamlet where we stopped on our way to Leh a few days ago.
As I sat down here, I observed an acute silence amongst riders, as if all excitement had gone missing, as if we left it at Leh. There weren’t banters flowing around, no one was pushing each other, no laughter; only a passive wait…till this Ladakhi kid showed up.