Part I was about mysteries of Bhangarh Fort – based on prevalent notions (online and otherwise), which have endeared a relatively unknown Bhangarh to the ever increasing streams of visitors. 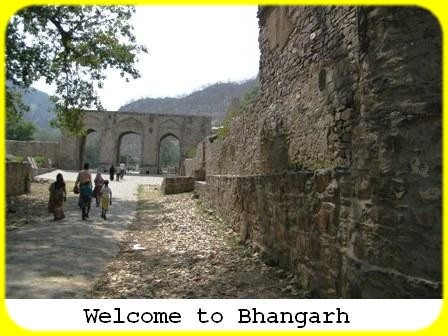 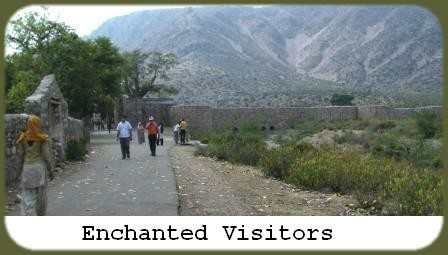 In this part, I dwell upon a few aspects which are at variance with the enigmatic proportions endowed onto this place; naturally based solely on my perception (which does not seek to absolve itself of its propensity to make wrongful assessments/judgements). My aim of writing this ‘Demystifying’ rejoinder is merely to put things in perspective for prospective visitors – since there are some ground facts which I have hardly seen being put forth anywhere. Reason for this could be the fact that a visitor to Bhangarh so tends to get predisposed by the ‘mystery’ quotient, before even setting his eyes on the fort that he willy-nilly ends up propagating the existent notion (and probably believing in the same, to some extent).

The issues that made us feel a bit un-ghostly about the place are as under:-

1. The place was teeming with visitors of all shades thus robbing it of that demonic ambiance. A few untutored snaps would tell the story – 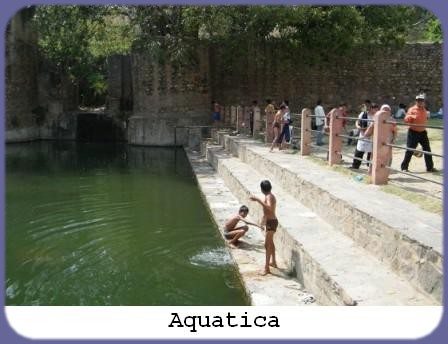 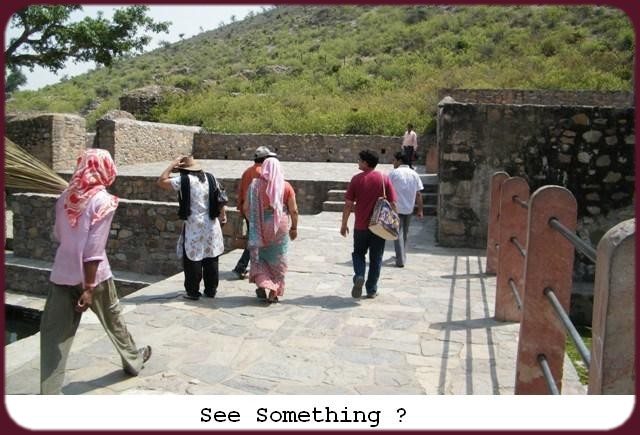 2. The impressive and impeccably maintained ruins appeared more like a vaunted picnic spot – people lazing around in shaded nooks, hordes of riotous cricket-playing boys, shepherd moving around with his herd – its jolly jovial atmosphere, a la Lodhi Garden or Nehru Park, was far removed from the macabre mood one would expect seeping gloomily through the senses…. and so on. 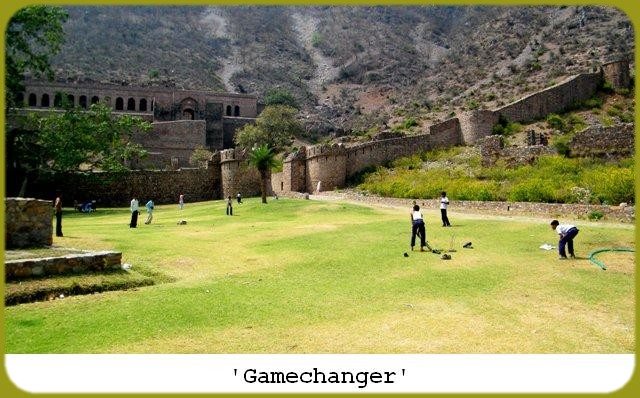 3. Lastly but importantly, my daughter passed her definitive judgement (defiantly and vocally) “Is this the place you were talking so much about ? At least I am not scared.”

Well, as I said above, all this could be a wrong notion on our part – and perhaps we were also influenced by the fact that it was noon hour of an April day in Rajasthan – the heat and languor weighing heavily on us, which probably kept any fantastic feeling at bay.

After Bhangarh, we set forth to Alwar at around 4 pm.

At Thana Ghazi, take the right turn (left goes towards the Jaipur NH) – this road passes through Sariska Sanctuary to reach Alwar. This route offers peripheral glimpses of Sariska, as the road leaves Sariska on its right side. Condition of the road (approx 30 kms patch from Thana Ghazi till about 25 kms short of Alwar) is not impressive – massive potholes and cracks on otherwise wide road were impediment to a smooth drive through Sariska. The drive, though, offered sighting of large number of deers apart from ubiquitous langoors. 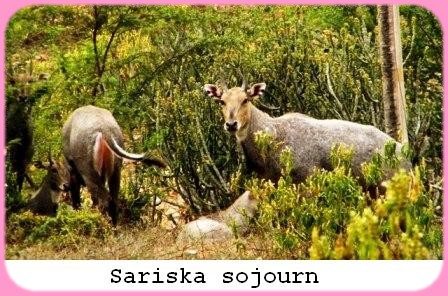 There is one more route from Bhangarh to Alwar which leaves Sariska on its left (by such a wide margin than the drive is well away from Sariska area). Diversion for this route occurs some 5 km after Bhangarh, from where a right turn has to be taken from a T-junction.

In Alwar, night stay at RTDC Hotel Meenal was eventless. The hotel’s location is slightly away from the main township/marketplace – guests without vehicle may find it difficult to reach the central places on foot. 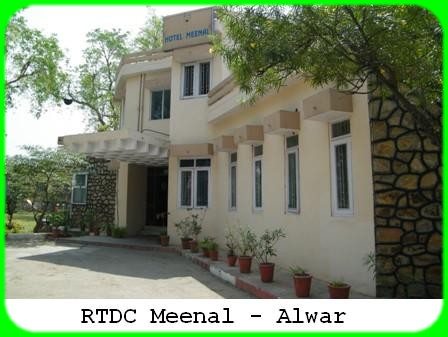 Next day (Sunday) we paid a visit to Bala Qila – the fort is situated some 12 kms away from Alwar offering a bird’s eye view of Alwar. One important point here – (despite this being our second visit, we overlooked again) – the security guard at the Qila is reluctant to permit visitors inside the fort unless accompanied by a CLEARANCE FROM TOURISM DEPTT, ALWAR. So it would be prudent to collect that slip form Alwar before moving out to Bala Qila. 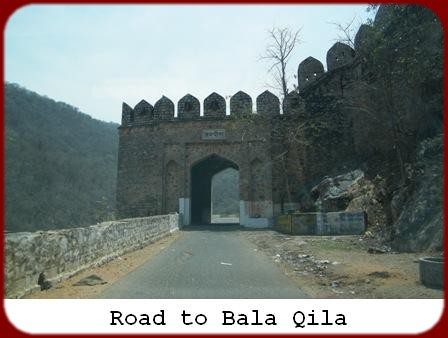 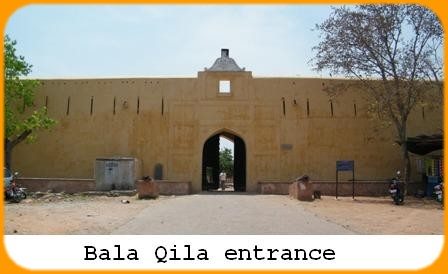 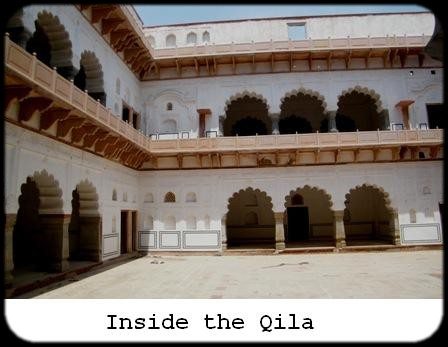 By Sunday afternoon we were on our way to Delhi – after having enjoyed a superb short weekend. 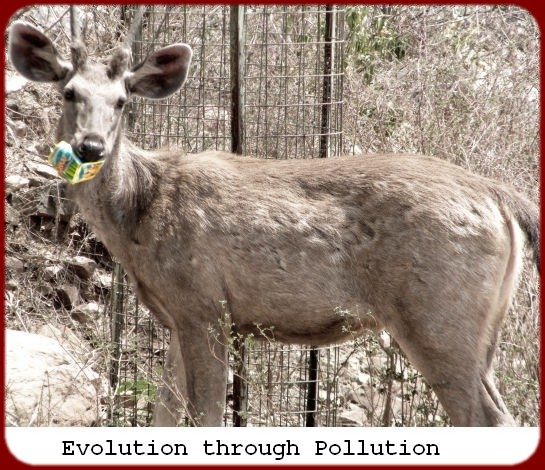 At parting, I once again emphasise that aim of the article is not to take away any sheen off this vaunted and haunted fort of Bhangarh. In fact, it is a worth while destination even without the overlays of mysteriousness. As far as our no-show with eeriness is concerned, I would say these unknown forces have unknown ways; our knowledge being just about enough to know that there remains so much to know.

Maybe it was there all along – as we walked and talked and chortled – secretly watching us, following us or hovering over us, just that it didn’t want us to know. Maybe others have actually felt the presence; the melancholic strummer from across the ages beseeching the passer by – pleading with words that may not be heard but felt…..

Even before I could earn a driving license, and even before the elders could know of my newly acquired driving skills, I had once taken away a car (Landmaster -perhaps older version of Hindustan Motor’s Ambassador) of my father’s friend filling it to the capacity with small children of our neighbourhood (nearly 12 of them). The old car was entrusted to my father for finding some good customer for it who would be willing to pay Rs.10,000/- for it.  With all those children in it, I stationed myself at the driver’s seat and had a circular trip upto Kuthal Gate (between Rajpur and Mussoorie).  When the parents of all those ‘missing’ children came to my father to enquire if he had any clue as to where all the children could had gone, my father, discovered to his great horror that not only I was also missing but the Landmaster car also was not where it was supposed to be.

Today I can visualize how he must have been going through in those moments. When after an unbearably long wait of an hour, he finally saw the black Landmaster coming in the lane like a fat, pregnant buffalow, and then 12 children jumping out of it one after the other, giggling and laughing, he was red hot with rage. I had already seen him standing in front of his clinic in the lane and if I had any option, I would never have come out of that car but as I stood before him trembling with fear, he gave me good thrashing. As revealed by my father later, he was most perturbed because I had taken 12 children of different families of our lane.