Ranthambore seemed far, three years back. After our attempt at Delhi-Jaisalmer in end-2007 followed by Delhi-Allahabad in mid-2008 and finally polishing 2008 by Delhi-Khajuraho (till Jhansi and then to Khajuraho), it didn’t seem that far. “Ab dilli door nahin”. Remember the song ‘Chun Chun kartee chidiya’, well it’s from the movie with the same name. So our set of chun-chun chidiyas ranging from three kids aged between 4-6, two drivers (one bulky with a social sense of humor while the other a rather snappy, both middle-aged), a calm doc and two vocal ladies, topping with a college-going engineer made the band a wholesome. We started off on a Saturday morning in two cars and here’s a quick road-review.

We consulted “Map My India” and for the third time it failed to deliver. I don’t blame them but their back-end map services are neither complete (most of upper Hills in Kumaon) nor accurate (Look for Nainital-Kausani) and not updated (Delhi to Ranthambore). But you dont know what you don’t know till you… So the plan was to do following

When we reached Shahpura, we were advised at the Toll Gate to go all the way till Jaipur and then go towards Dausa, which we did. But on the return journey, we tried an alternate route which came out to be 1.5 hours shorter and about 50 KM less than the TO route.

So let me take you through both the routes.

1. Getting out of Delhi. Delhi – Gurgaon
Distance – Depends on your starting point in Delhi.
Time – Depends on above.
Quality of tar – Excellent
Toll – Rs 17

Nothing great to write home about. Depends on where you are. Ask for ‘Dhaula Kuan’ and get on to jazzy new-age Delhi-Gurgaon expressway. Be very careful since this high-speed drive is very new to this country. More so if its early morning or late evening. It’s just impossible to spot jay-walkers. Very unfortunate that this highway has seen too many accidents in the limited time of its operation. Pay toll as they ask and keep going.

You are on NH8. Super quality high-speed roads which only gets slowed because of numerous toll booths and small cities. So watch out for petty traffic while you cross Dharuhera, Behror, Kotputli, Shahpura. After Shahpura, enjoy Amer fort on your right followed by Jal-Mahal. Go all the way till transport nagar and then take the left which goes to Agra.

You are now on NH 11 which connects Jaipur to Agra. The most interesting thing on this route is that, as you take a left, you feel like as if you are entering a grand castle or a palace. On both sides of the narrow road, Government of Rajashthan seems to be doing some kind of renovation project for all the old Havelis, fort-castle kinda architecture building. You are actually flanked by these structures till you reach ‘Sisodia Rani Ka Bagh’. 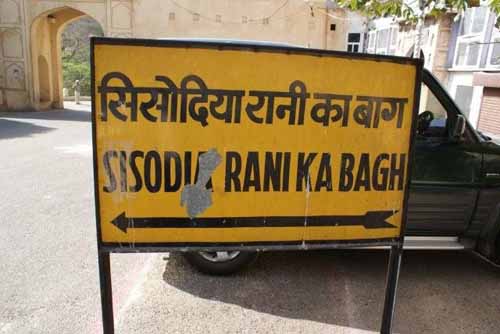 This is an old mini-palace which is now more famous for hosting parties and acting as a venue for marriages. We did stop since we knew that it has large lush lawns and we could probably use it as a lunch-pad but the guards at the gate didn’t allow us to take our food inside, though we could see a large shamiana which was being dismantled with the debris pointing to the lavish and wild party of previous night. We still decided to pay for the entrance but came out even more dejected. The loos were stinking and the palace was locked. On being challenged, the guards did offer us to show the palace but we moved on.

From now till Dausa outskirts, a new high-speed highway is being laid. So at most of the places only one side of carriage-way was open but since there was hardly any traffic, we could clock well. Dausa is famous for Rajesh Pilot.

It also seemed that we were not really driving through the hinterland, it was pretty close to NH8 experience.

As you enter Dausa, you need to now leave NH 11 and get inside the city. After maneuvering city traffic which never ends, you now find yourself in true countryside. The average speed takes a hit but we didn’t mind that. Somehow those long boring dry highways cease to give you any high beyond few KMs. We passed through what looked like the ruins of old cities. 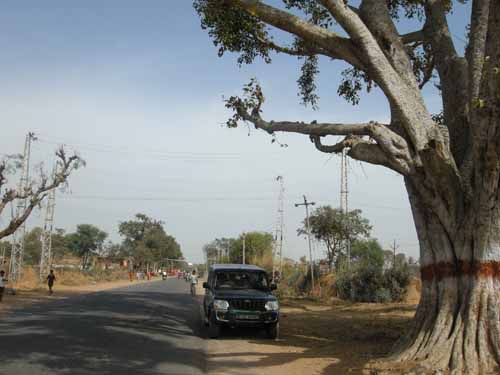 At times passing through narrow lanes, paved ways, looking at village life from too close, hen sheds, wells, occasional school and what not.

By now, you would have lost all hope of finding a good road only to be surprised pleasantly to find a road which seemed like freshly baked. It was part of ‘Mega Highway Yojna’ and road-signs were fairly ambitious. We were pretty far and away from Bhopal and we could find signages for Bhopal, Jabalpur and Ambala (on the other side). 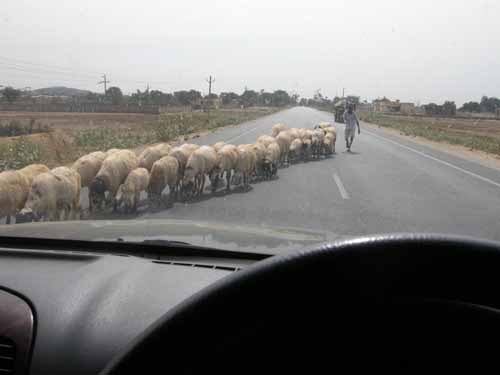 We went on and reached ‘Sawai Madhopur’ by 1.00 PM. Post Sawai, you find yourself in a maze of high-life hotels thinly spread over the large landscape. We had started from Ghaziabad at 6 in the morning. We reached our hotel, Pugmarks, by 1.30 ish making 460 KMs in 8 odd hours. So far so good.

Whatever goes up, comes down
If you have read so-far then I would save you more effort by making this section shorter,without driving too fast. We returned through an alternate route.

1 Ranthambore – Lalsot – Dausa
Similar experience as in ‘To’ journey.

From Dausa, ask for the road which goes to Agra. As you get out of the city, you would have to blink many times to believe what you landed on to. Super shiny surface, tolled road. But this road is yours only for next 25-30 KMs which you can cover in 15-20 minutes. Turn left from Sikandara towards Alwar.

While Dausa-Sikandara was out of the world, this one is no laggard as well. After driving for a while we read the boards and found that this is again part of the same ‘Mega Highway Yojna’. This is a single road so you have to more careful but we could hardly find any traffic on a Monday afternoon. Its a tolled road and there is not much action beyond the road. You get past royal Rajgarh, and since we were heading towards Delhi, there were enough signs to guide us. Post Alwar, you have to take few turns so as to avoid the main city.

4 Alwar – Kishangarh – Bhiwari – Daruhera
Distance – 90 odd KM
Time – 100 minutes
Quality of Tar – Good
Now you are out of the maze of highways and its good old solid black tar with its own share of jhilmil Dhabas, tractors, small towns. The road is pretty good and its almost a one straight single road till the industrial and house-booming town of Bhiwadi. Post Bhiwadi, turn right and latch on to busy NH8.

Nothing great to write home about. Usual good roads with a the routine highway rush. As we entered the city, we felt like the part of melee doing our chores. And after surviving BRT and falling back on DND, we reached our place by 7.30 PM. We started at about 11.30 AM. This route is shorter by 1.5 hours and by about 50 KMs.

Three days, close to 1000 Km of drive, one Tiger and gallons of good time.