Well, for my last post on this trip. This piece is for those people who are interested in making the trip to Corbett and intends to make life a little bit easier for them. Hope you like it and is as informative as I intended.

As I informed you all earlier, Corbett is divided into 4 main tourist zones – Dhikala, Bijrani, Jirna and Durgadevi in the order of preference by tourists. Dhikala and Bijrani have perennial water sources and hence the chances of sighting the tiger are more. Jirna, on the other hand has water during the monsoon while dry during the summer. Durgadevi has both hilly terrain and is far and hence is least preferred by both tourists and gypsy drivers alike. Bijrani is nearest to Ramnagar town while Durgadevi is farthest.Entry to the Dhikala zone is through the Dhangadi gate which also houses a pretty good museum. Day Safaris are allowed at all zones except the Dhikala zone. A conducted day tour by a canter van is allowed to the Dhikala zone. Alternatively safaris and private vehicles are allowed into this zone only if one has overnight stay bookings/permits for the forest rest houses in the park.

The Project tiger office is located at Ramnagar. Its abut 500m from the turn off from Kaladhungi on the left. To the right is the road to Dhikuli (where all the resorts are located) and on to the Bijrani and Dhangadi gates of the park. The office opens at 6 am. There are 4 counters. The two counters on the extreme right are for the day safaris. The two counters on the left are for the conducted tours to Dhikala and reservation for overnight stay there Dhikala. Two jungle safaris are allowed daily from 6-10 am and 2-6pm in all zones while for the conducted tour to Dhikala the timings are 6-12 pm and 12-6 pm. Limited number of vehicles are allowed into each zone per day (I heard it was 30 at each gate but not sure). 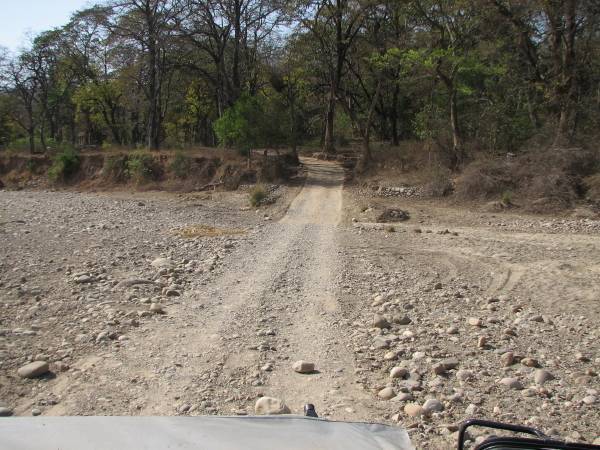 Terrain at Jirna – Quite suitable for even small cars. 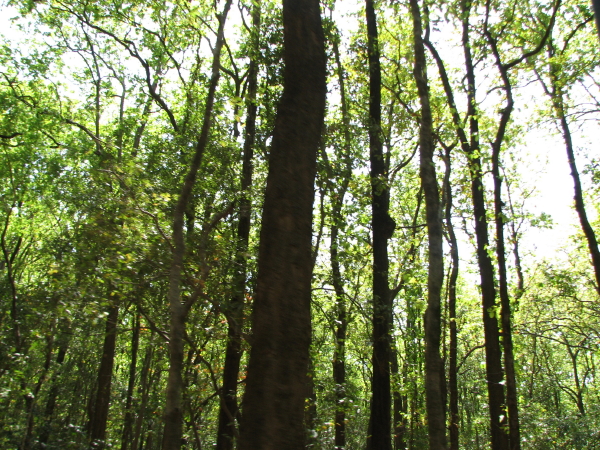 The forest en-route to Dhikala 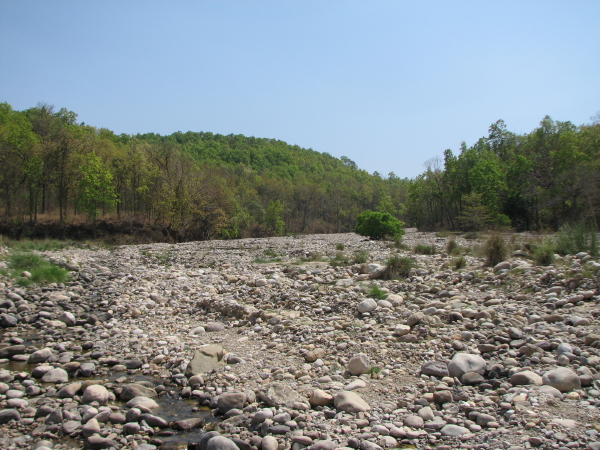 Dry River beds along the way

There are two ways of booking the safaris and tours. If you are one of those who value their morning sleep then book a safari through an agent or through the hotel. They charge you a nominal fee for their services. In any case for collection of application forms you will have to go in person as forms are given only given on production of an ID card – The only consolation is that a place is saved for you in the queue by the agent.

If you believe in doing things by yourself then it’s a relatively easy process if you understand the system. You might want to come early to the office – anyway it’s a pleasant drive from Dhikuli to Ramnagar early in the morning on amazingly good roads and if you’re lucky you might just spot a tiger too.

By 5 am the agents are already there. Fall in line and you will find a few lists being circulated where name and number of passengers are being noted. This might seem as a list of clients for the agents but it is actually the informal order by which applications will be given at the counter. So make sure you make your entry in the relevant list. The gates open at 6-6.30 am. Make your way inside to the appropriate counter, show your ID card get the application, fill up as fast as possible and submit it. Depending on the mood of the man in the counter, the list might be followed or not – so it is probably a good idea to get a place at the beginning of the queue too.

For the safari you are required to enter the vehicle number and diver’s name too along with the application. If you have your vehicle this is relatively simple. If not, in the intervening period from 5 am to 6 am talk to the agents. They will only be too happy to arrange a gypsy for you and will provide you with a name and number. The rate for the day safari to Bijrani is Rs. 900/-, for Jirna its Rs. 1000/- and more for Durgadevi as its far. For the night stay at Dhikala, the rates vary. These rates are for a gypsy irrespective of number. A gypsy seats a max of 6 people – so it would be a good idea to have more people to economise. If you are travelling as a couple then search for companions to join you in the safari.

And that’s it, you’re done. My five cents- try and get advance bookings for the morning safari or conducted tour as traditionally sightings are more in the morning. If only afternoon safaris are available then make sure you ask the driver to start as late as humanely possible as the movement of animals start just before sunset. Your window is 2 to 6 pm meaning you have to be out by 6 pm but can go in anytime after 2 pm.

Corbett for dummies was last modified: July 17th, 2019 by Patrick

We just checked out the restaurant and it was quite an old-world dark and dingy place. Somehow most of the state run hotels have this dingy darkness probably because of ill-designed interiors or just plain apathy…Room Service is quite dismal and it took them as much as 1 hour to get you a cup of tea and much more to get breakfast. To top it all, the flask was broken and the waiter was in bathroom slippers…