Now we headed to Udupi via Balehonnur, Sringeri and Agumbe. The lush-green views refused to subside and we were continuously treated with great views of fields and foliage. If coffee was intoxicating, now we were treated with tea plantations. The mild climate of this region is probably suitable for any concoction! 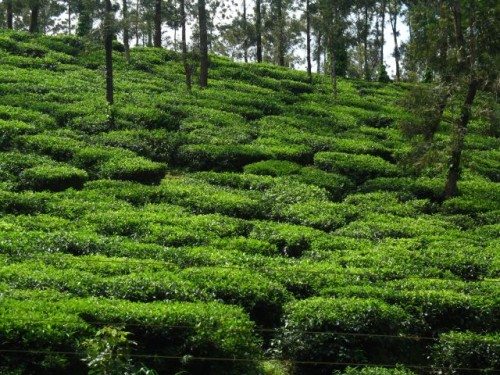 Sringeri is famous for a “mutt” built by Adi Shankaracharya in 12AD. The mutt was closed for afternoon siesta so we could only visit the main temple premises and missed the wonderful meal that is supposed to be served everyday for lunch. Anyways, we took a round of premises, clicked pictures and saw big fishes diving for alms from visitors in Tunga river. 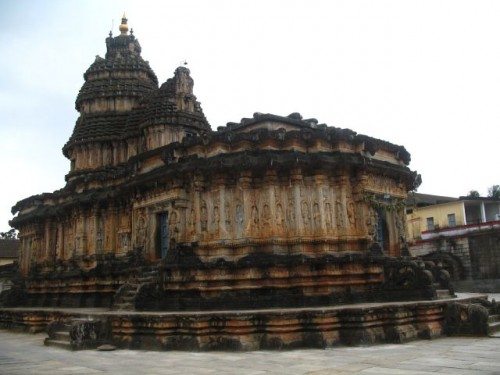 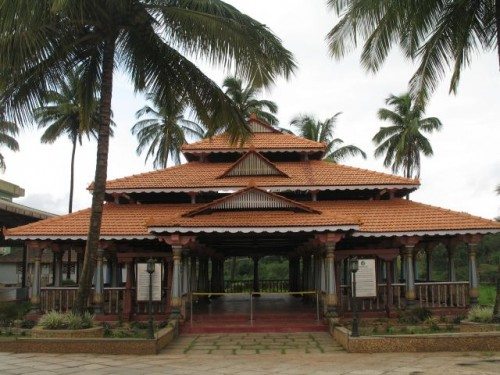 We left the place and headed towards Agumbe which is famous for its sunset point from where on a clear day one could witness sun setting in Arabian Sea which is around 50 km from there by road. We climbed to that sunset point and we could really see a portion of sea through hazy atmosphere. 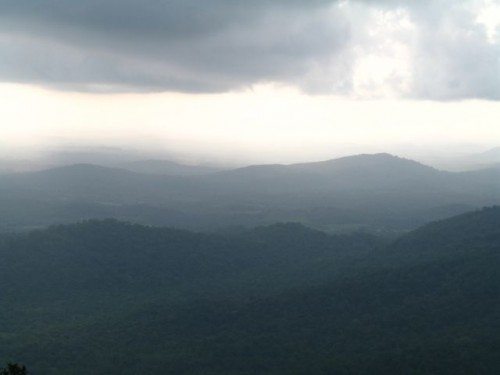 The valley beneath was all rolling hills with forest, clouds hugging them and a couple of distant waterfalls as specks of white on green background. From here we hurried to reach Udupi as soon as possible to catch sunset but eventually could not. The road from Agumbe down was all hairpin bends through Someshwar wildlife sanctuary. Before Udupi we crossed Manipal which is famous for lot of technical institutes and we could see lot of student community. It truly is a academic town. Once we reached Udupi, we rushed to Malpe beach which was 8 kms inside from the town. By the time we reached, sun had already set but enough light was remaining to give cloudy sky an orange hue. We could not resist ourselves and dived straight into the water. It was such a high for us to come so far unplanned. We checked into “Karavali” hotel right on NH-17. Now was to time to hunt for hotel “Mitro Samaj” which somebody recommended for good food. We searched for it but it was closed, so had to settle for Woodland’s the same one as in Chennai. Udupi is famous world over for its culinary skills and there was no disappointment.

Next day we started early and headed for Kaup beach which is some 12 kms south from Udupi. Once we were there, we could not locate where is the entry or open space where through which people enter the beach. After going back and forth once, we parked at one place and walked through the village to get to the beach. There was a light house perched on a rock to our left and beach was further left. 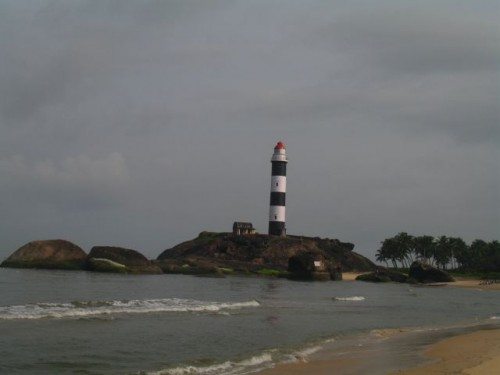 Light House at Kaup Beach in the morning

To get to that we had to cross one stream. As soon as we crossed it, we landed into the crab colony. There were hundreds of crab infants running helter-skelter on slightest disturbance. We circumvented the colony and came to the main beach. There were a few fisherman, unnetting the crabs they had caught. The crabs were beutiful their shells displayed various shades of color and also was one Ray fish. 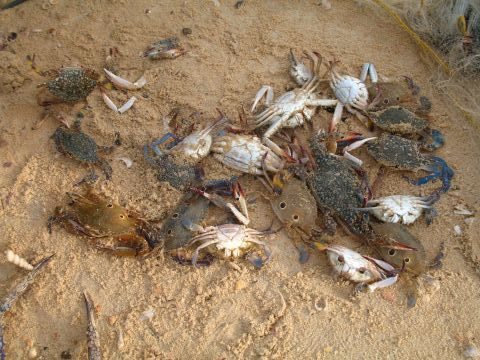 We spoke to them and held couple of crabs in our hands and did some other antics. We walked on the beach but it was not that great. The reason being that there was lot of drift wood or burnt wood floating in the water and lot of seashells which were making it difficult to walk. After spending an hour, we came back.

Our next destination was Karwar, some 210 km away. We started from Udupi on NH-17 and were expecting smooth ride but road was broken at many places which hampered our progress but the visual treat more than made up for it. Close to Maravanthe, the road comes right next to the sea shore for a kilometer or so. 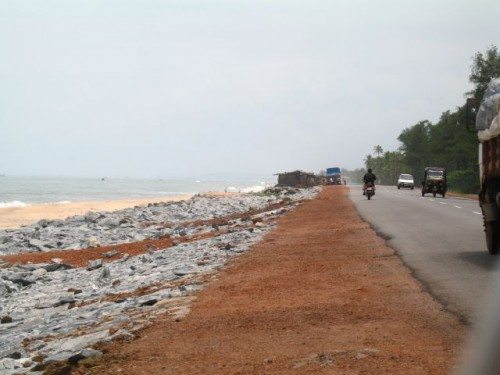 That 1 km stretch was amazing. We stopped and had coconut water just to elongate our stay there. I wonder whether such exposed stretch is pose any danger to traffic during stormy weather. Murudeshwar announced its presernce from a distance when we saw gopuram of the temple coming up there and lord Shiva statue from a distance. 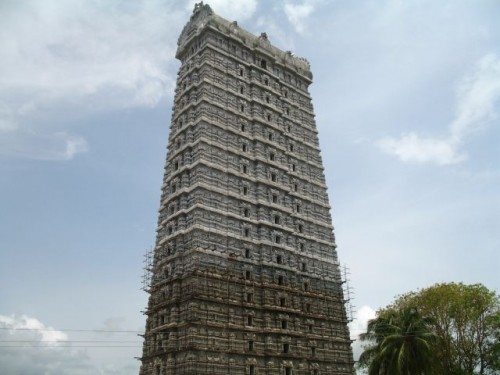 Since I had seen this vista previously in some magazine I easily recognized it. The statue is part of temple complex which is coming up in Murudeshwar. Murudeshwar seem to be dominated by some Mr. R N Shetty. His initials RNS could be seen on lot of buildings including a gorgeous RNS residency hotel. There is a restaurant called “Naveen” which is built on the edge of water and there are few sea-facing seats which we readily occupied. The lunch was sumptuous moreover by the views we got. 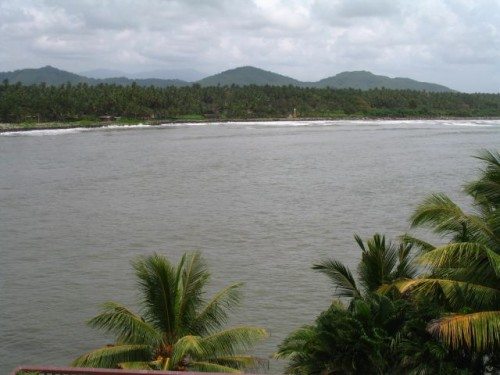 Next stop was Gokarna which literally means Cow’s Ear. There is a famous temple here dedicated to Lord Mahabhaleshwara, a form of Hindu god Shiva. We headed straight to the beach but at that time of the day with with glowing sun, it wasn’t that inviting. 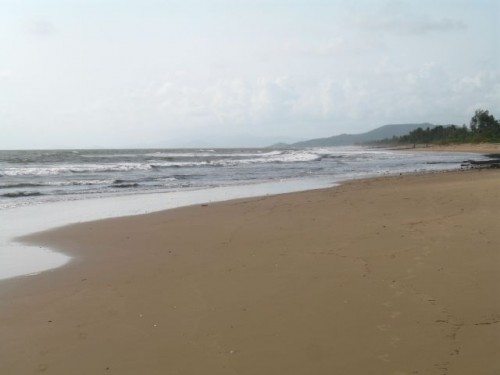 Since we were now at MSL so it was not decently hot during daytime. So, we pushed off quickly and headed to Karwar. We wanted to reach Karwar comfortably before Sunset which we did. At one while negotiating a ghat, saw an amazing sight in the form of a railway station on Konkan Railway set amidst vast expanse of splendid fields.

The Karwar coast has a Naval base and a port where a huge ship was berthed. We could see granite cargo being transported there. We headed straight to the beach here, undressed and jumped into the Arabian sea. The slope was very gentle here so we could go deep inside but the waves were equally gentle. Karwar has few islands off its coast, one of them being famous for snorkelling and other water sports but they are not run in monsoons. The islands were clearly visible from the beach and one could make out that it was raining on those islands. The clouds were engulfing the sun time and again and we were not sure of watching a clear sunset. But otherwise, sky was beautiful, grey clouds in orange sky and rain lashing the islands was very dramatic. 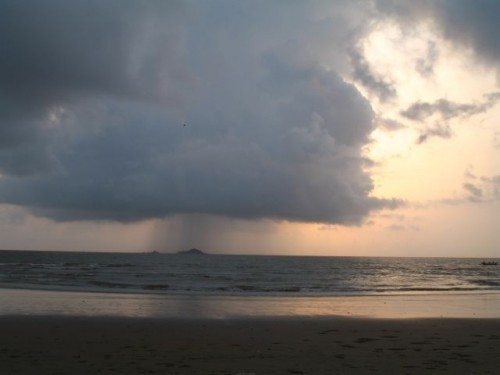 Its raining at one of the islands off shore @ Karwar 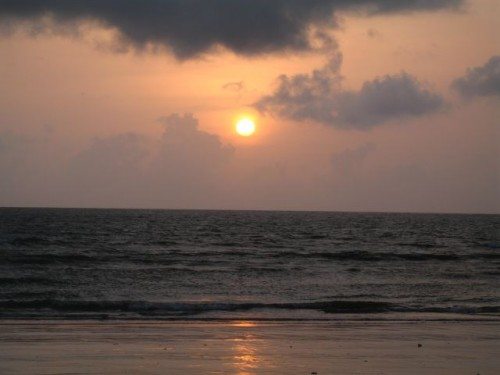 Lot of people had gathered by that time and were watching the sun set peacefully in sea. We checked into Navaratna Lodge in the town which was the most reasonable one. We dined in “Amrut restaurant” which was famous for seafood preparation. We had Tandoori fish of Anjal type. We siphoned it off to our stomachs in no time. prawn fried rice was equally good. By end of the day we added another twist to the plan when Nitin informed that Goa is not very far from Karwar and famous Palolem beach is well within reach. We confirmed with the lodge manager that it is indeed the case and it is around a hour and a half’s drive.