As they say beauty is in the eyes of beholder. And that is so true of the Valley. In Kashmir there is as much hidden as revealed. So the Valley has to be seen with the eyes of the soul. These words were true as soon as I visited Kashmir “The only Paradise on Earth”! It was the month of October’11 & the year was about to end. I desperately wanted to go on a journey. The traveler in me was hungry! So, We decided to plan a trip to Kashmir. My Dad made the necessary booking & arrangements. We were to leave Lucknow on 5th Nov’11 (2 days before Eid) & the trip was for ten days. I was so excited that I used to literally mark the days on a calendar. Each day I used to chant Kashmir! Kashmir! Kashmir! which definitely irritated my family! Days flew by, and the bags were packed. We took off from Lucknow and reached Delhi the same evening.As we had a connecting flight the other day so we stayed in my Mausi’s residence. Next day, in no time we were in Kashmir. 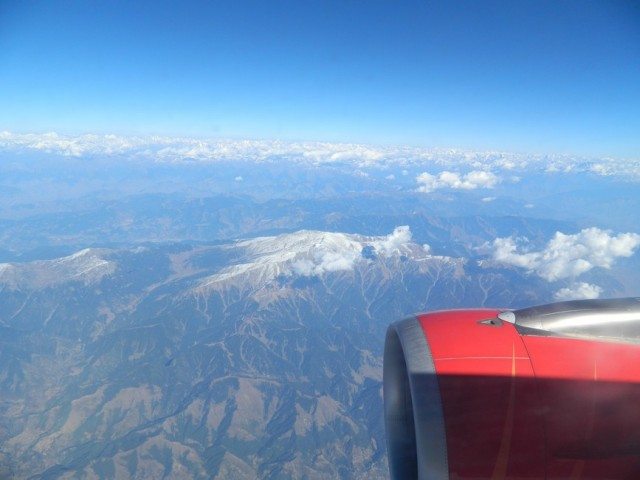 We landed on Srinagar’s Sheikh ul Alam Airport. It was surprising to find Army bunkers and camps on the side of the runway. The crew of our flight strictly instructed all of us, not to take photos. Then, we proceeded to baggage claim area and yet again, the army personnel with their guns were standing next to the conveyer. My dad booked us a stay in hotel “New Green View” .The hotel’s driver greeted us and took us to the hotel, which was situated on Dal Lake, Boulevard Road,near Nehru Park. 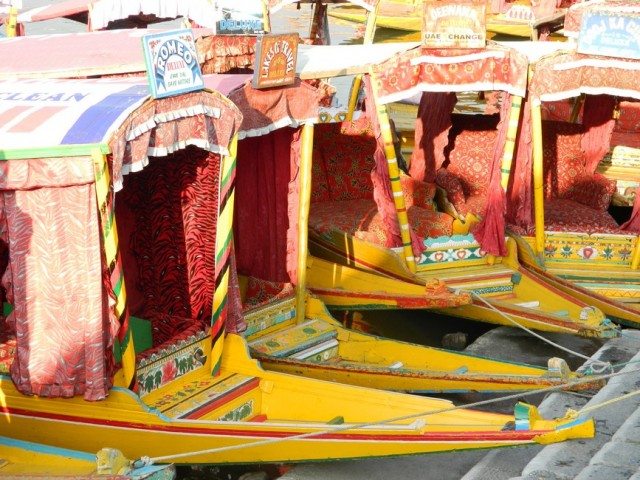 I was surprised to find the place packed with tourists. The houseboats and hotels were filled except for a few. It seemed like India had rediscovered how nice Srinagar and the mountains of the area could be. Anyways, we then proceeded towards our hotel. As New Green View was on Dal Lake, so we had to cross the Lake by a shikara. The Hotel Manager Mr. Ghulam welcomed us and arranged a Shikara to go to the other side. 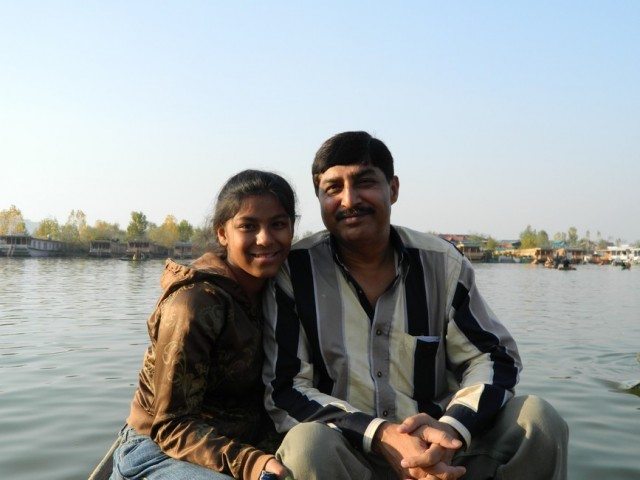 My Dad & Sister on the Shikara 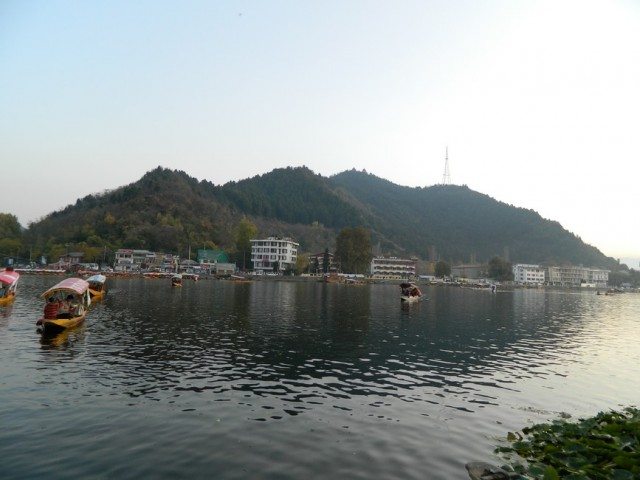 View of Dal Lake from the hotel

As I mentioned that Eid was falling the next day, so were found some Sheep in the garden of the hotel. Check out the pic below, which shows Mehndi put on these Sheep’s. On inquiring, I got to know that this is done on the part of Muslim traditions. Sadly, Now none of the them are alive. :( We then proceeded to our room and had a cup of tea. My taste buds can still recall the taste of that tea made from Sheep’s milk. 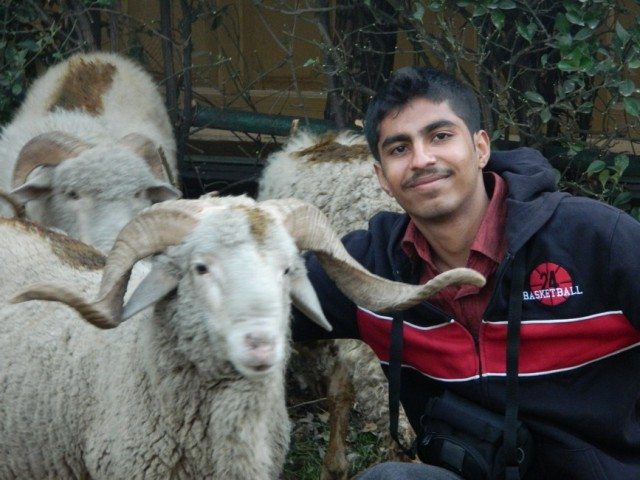 Me with one of the sheep

My Dad and Mom went to Mr.Ghulam’s Office to plan the trip.We had to follow the Itinerary below:

As we were free the same evening, So Mr.Ghulam suggested us to see the majestic Market on Dal Lake. Now, this was what I hated.
SHOPPING! Uhhh! Simply a waste of time! ( Female readers would definitely offend :P ) Anways, I was some what excited to photograph Dal Lake.I  accompanied my family and took my camera.Here are some of the shots. 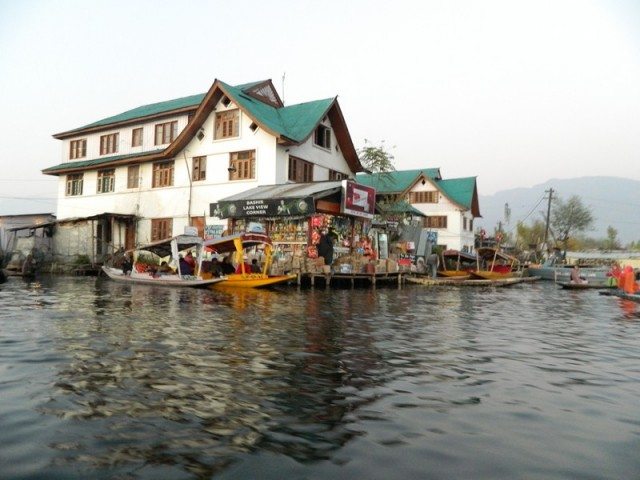 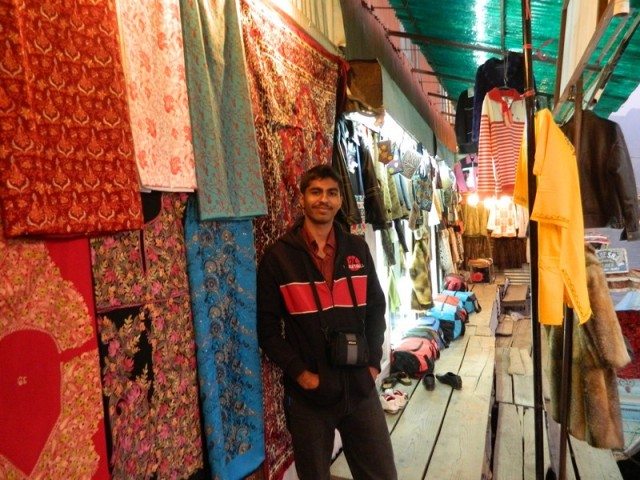 Me on one of the shops

As soon as the boat stopped by the side of a shop, my mom was the first one to step out! LOL! You can call her a Shopaholic!
My Dad who was ready to get his pocket drained followed her! Now, how could my sis. be behind, so she also ran away! I wasn’t interested in that stuff so I decided to take some shots. While in Srinagar I also wanted to do some serious investigation into the conditions of Kashmir. So I took the opportunity to talk with the local Muslims of the area to get their views on how things are, and what it has been like to live here with the terrorism and violence for so many years.

A few such opportunities included when I had a talk with a shop keeper who makes his living by running a carpet factory and selling Kashmiri crafts, such as carpets, shawls and other textiles that Kashmir is known for. So to get their views on things was quite fascinating .The shop keeper said that he had lived in the area of the Mughal gardens years ago, which was an area where the militant Muslims would sometimes come down out of the hills and knock on the door of anyone they chose and demand food, water and money. When you have guns pointed at you, there is little else you can do. Or they would even separate the men and women and then rape the women. The militants would especially target those who had money, such as going to the wealthy homes, like doctors. But such people soon left Srinagar for other places. He said that many terrorists came in from Afghanistan and were paid by Pakistan to cause trouble in the area. Many still are, but now focus on rural regions outside and far from Srinagar where it is easier to get away with their dirty work. Thus, even the residents of Kashmir know that Pakistan is still the home or shelter of numerous terrorists that reside there, or assist them in creating trouble in places like Kashmir in hopes of assimilating that area into Pakistan. At the time, no one could speak out against the militants. You could not say anything to even your wife or children because if word got out in any manner that you were against the interest of the militants, you might be the one killed or missing the next day. You had to tolerate what was happening or die. You had to watch in silence what occurred to other Muslims, and especially what happened to the Hindus of the area, or even the Sikhs, or any other non-Muslims, many of whom were terrorized, mistreated, tortured in terrible ways, and even killed. Thus, fear tactics for ethnic cleansing of the area of all non-Muslims took place for several years.

As many as 150,000 Kashmiris have been killed or disappeared during the 1992 to 1996 years because of the insurgent terrorists. However, more than 400,000 Kashmiri pandits have been driven out of Kashmir and into India, who are now living as refugees in squalid camps, due to ethnic cleansing by the Muslims. I was happy to hear that this year Kashmir recorded the maximum tourists (Thanks to the Central Govt. for the LTC packages).

I spent an hour with the person and it was interesting to hear to him. Meanwhile, my family came out from the shop. They booked a Kashmiri Blanket with complimentary Shawl, Blanket etc. in the package. I wanted to buy a jacket for myself, but many relatives suggested buying it from Jammu. It was already 8:00 PM, and I was feeling hungry! We then crossed the Dal Lake and went on a walk on Boulevard Road. I clicked some snaps of the Dal Lake. Check them out: 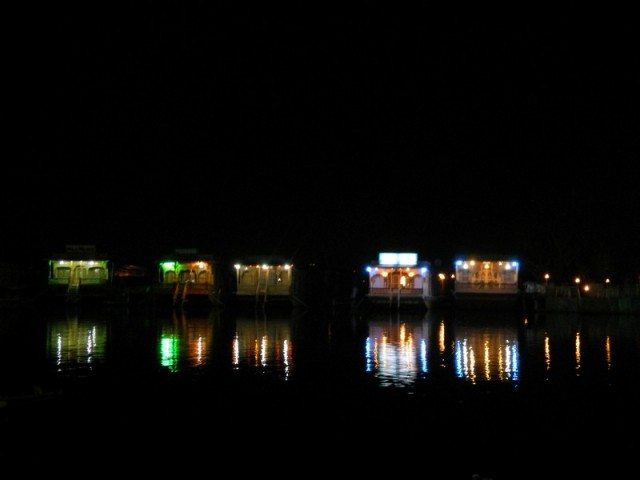 We found out a Punjabi restaurant named “Ahuja ki Rasoi” and had our Dinner there. We waited at least 20 minutes for our turn, as the restaurant was Jam-packed! (As it was the only Punjabi rest. on the street). After some delicious shahi paneer and naans, we walked back to the Floating Post Office (next to the Dock of Shikaras). We then took a Shikara for the hotel. :)

It was certainly a memorable day! I was damn excited for the actual trip to begin. With that its the end of this post, but remember to catch out my coming posts based on the itinerary. Hope you people enjoyed!

We were getting regular updates about the weather and the happenings around the resort – The Mystic Lodge – from Mrs. Sen, the resort…