No, not Tiramisu, but definitely more delectable! Borobudur Temple in Magelang, near Yogyakartha (Indonesia) made to look like a layered cake with history seeping through the lava-rocks, managed without trying, in raising my brows by many inches. On that slightly overcast morning of November 6, 2008, it appeared to me like a grey cake waiting to be savored. A closer look changed that notion, for, unlike a cake, this temple wasn’t going down in one bite. Through centuries, it was going strong, in the face of rain, sun and Javanese winds. To me, it was a symbol of persistence and determination…just what I needed to get to the top, having spent the previous night climbing Mt Merapi, in the hope of seeing the sun rise over its volcanic crust and failing to summit, thanks to the unpredictable Javanese rain and mist. 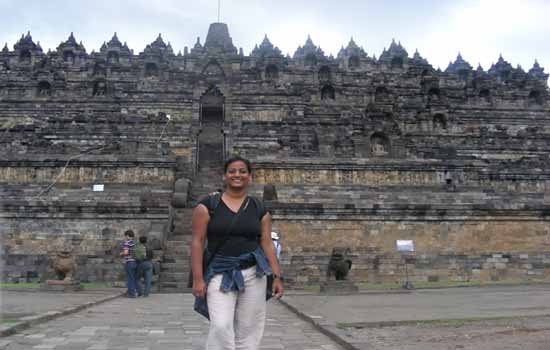 I dragged myself over to the top, telling myself it wasn’t as bad as walking up the mountain, single-file, through dense vegetation with a headlight that grudgingly lit a few inches of the mist-covered path at midnight. My feet and back protested but I kept going till I pulled myself up the last steps to the top and plopped by one of the perforated bells (stupas).

It was worth the effort. After a while, I walked around the central dome, fanned by the cold winds, soaking in the sights before me.

The dome surrounded by many stupas, actually sat on a platform of three circular platforms that in turn reposed on six rectangular platforms (the wedding cake theory!). The monument was layers and layers of stones, set between two volcanoes, rising majestically above the ground, depicting the era of Buddhism long gone. Inside each of the stupa sat a statue of Buddha and it was quite a task to reach them through the perforations that appeared deceptively large, but narrowed inside. The carvings on the stone walls on the lower rectangular platforms depict the early life of Buddha. 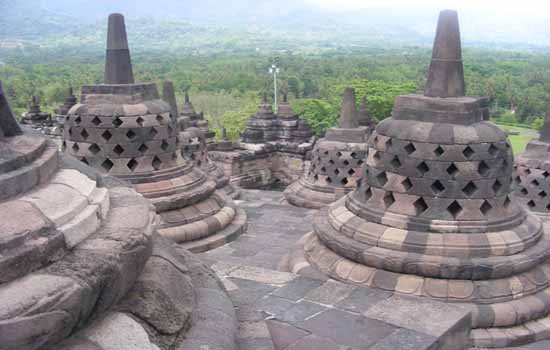 Borobudur commanded respect for without warning a calm descend on the platform as the noisy tourists suddenly dropped their voices to a whisper and applied themselves to imbibe the aura that essentially bonded them with the past. The pleasant weather and the surrounding green makes up for all the climbing. But hey, it is not really hard; though from below it does look quite daunting.

Borobudur Temple is the largest attraction on this side of Java. Even if a visit to the temples does not feature on your must-see plans, you could easily make Borobudur an exception. In Bali, an Irish traveler warned me off Borobudur, because, he said quite sordidly, that if I had seen Angkor, I was wasting my time. But to compare Borobudur to Angkor is like comparing Mt Everest to Mt Kilimanjaro, while one is a series of mountains, (and the highest of course) Mt Kili still is the highest free standing mountain! 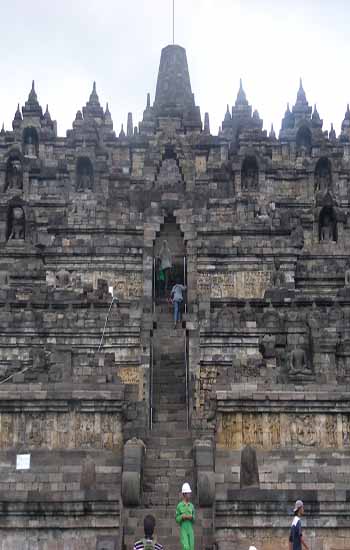 I am glad I kept my own counsel.

How to get there : Fly Jakarta to Yogyakartha from where you could hire a cab, a motor bike, or depend on the local bus service, which surprisingly is very reliable. Domestic airlines are cheap and frequent. Alternatively you could hop on a train or bus from Jakarta.

Tips: Carry a bottle of water, dress properly, watch out for your belongings, and haggle with hawkers and vendors for a good buy.