Although all the Gurdwaras and temples have an equal reverence, some of them do leave an ever lasting impression. One of these holy places was the Guru Nanak Darbar Gurdwara at Gravesend, Kent, which I visited with Aman Bains’ family after having a sumptuous lunch at their home in Barking, East London on August 22.

This Gurdwara located at a distance of 35 miles from East London, was opened in November 2010, on the occssion of the birthday of Guru Nanak Sahab ji, the founder of the Sikh faith. It is the biggest Gurdwara in Gravesend and is believed to be the one of the largest in the U.K. The design of this holy place has been inspired by some of the historic Gurdwaras in India, including the holiest place, The Harmandar Sahib (also known as the Golden Temple), in Amritsar. Like Harmandar Sahib, the complex has been designed with four gateways to emphasise the principle of being open to everyone. 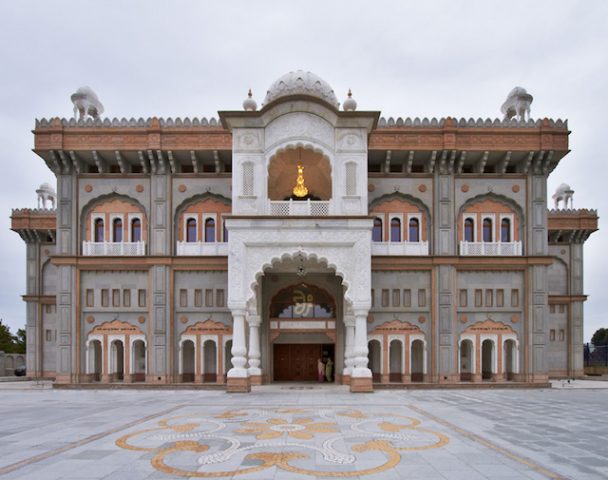 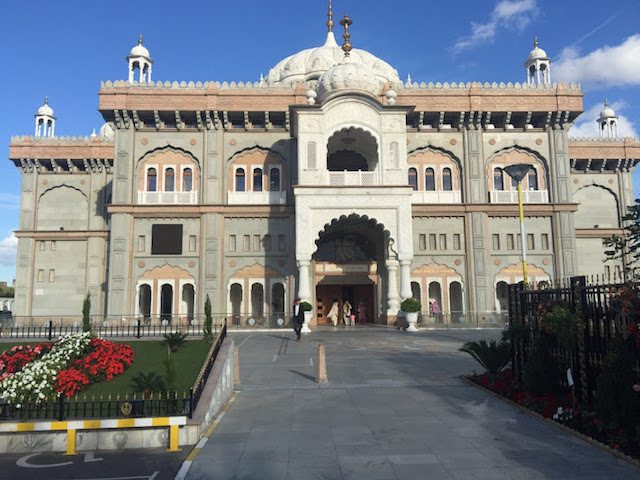 It was a warm sunny day. We reached Gravesend at around 3.00 p.m. and parked the car in the Gurdwara parking Area. As it was a working day, there was sufficient parking space available. We covered our heads with “rumallas” (a kind of scarf) and headed for the “Joraghar” (shoe collection centre), where we deposited our shoes. Covering your head symbolises respect and also readiness to gather thoughts and engage with what you will receive and give during your time at the Gurdwara. Likewise, removing the shoes before entering the Gurdwara, symbolises leaving the material world outside and everyone being equal. 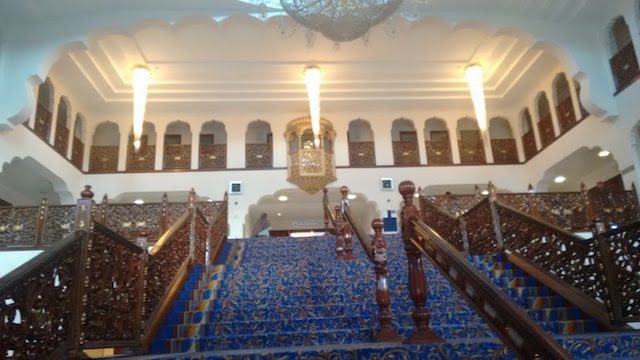 Entrance to the main hall

The main sanctum is located on the first floor and while climbing the stairs, that had some exotic wooden carvings all through, I was awestruck by the sight of the paintings on the roof of the dome. I stood there for a moment to absorb the grandeur of the surroundings.

Frescoes on the roof of dome 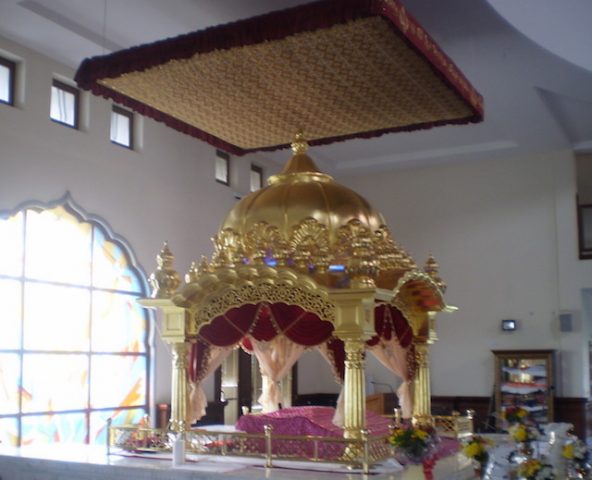 Amidst the peace and tranquility in the precincts, we entered the Gurdwara and followed the Sangat (congregation) to reach the seat of the Holy seat of Sri Guru Granth Sahib. After paying obeisance there, we settled down in the large well designed Kirtan Hall, which has a capacity to seat over 1000 devotees. The Raagis (singers who chant hymn shabads) were reciting the gurubani. I found myself extremely fortunate as they started the recitation of “Anand Sahab”, one of the fondest Shabad Kirtans right from my childhood days, when my grandfather, a devout sikh, used to escort me to a small Gurdwara in Pahar Ganj, New Delhi. Totally engrossed in the Guru Sahib’s Bani (sayings), I was almost in a trance. We all stood up to perform the “Ardas”, a common prayer of the Sangat which is invariably offered at the end of every service; the whole congregation stood silently facing Sri Guru Granth Sahib ji, while the leader of the congregation recited Ardas. After the Ardas, “ Karah Parsaad”, that is the blessed food, was served to the congregation. This is normally done after every service performed in the presence of Sri Guru Granth Sahib ji.

It’s almost impossible for me to describe the divinity of the Gurdwara Sahib and I seek the help of the splendid video shot by Diamond Studio to express my inner feelings. My grateful thanks to the publishers.

As we emerged the holy place, a young student volunteer offered to take us for a short guided tour of the Gurdwara. At the information desk, he gave us a booklet titled “Sikhism”, which detailed the life, mission and messages of the ten Gurus, Sri Guru Granth Sahib ji, the final living Sikh Guru, Panj Piare (the five beloved ones), Four Holy Sons of Sri Guru Gobind Singh ji, the Sikh history, the martyrs who sacrificed their lives for the Panth and many other educative readings. 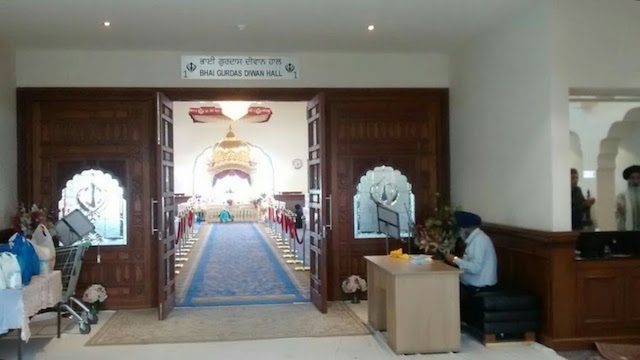 He explained about the paintings of the martyrs and showed us the small book section with some printed material about the fundamentals of the Sikh faith. There was a computer room, lecture hall and a library. Within the complex, besides the main Gurdwara, there are three diwan halls and two community langar halls. There is a building used for Punjabi lessons and a Day Centre for the elderly persons. There is also a sports hall for indoor games and the grounds are used for outdoor sports including football and Gravesend Guru Nanak Football Club. There are arrangements for weddings also.

Our guide requested us to have “langar”, the common food, prepared in the Gurdwara kitchens while reciting the hymns from Sri Guru Granth Sahib ji. The food for preparation of Langar is bought from the contributions of all the devotees and is served free to all the visitors irrespective of the recipient’s caste, creed, color or nationality. The institution of Langar was started by Sri Guru Nanak Dev ji and carried forward by the other Gurus. “Let all share equally; no one should be viewed as an outsider” sayeth Guru Arjan Dev ji. 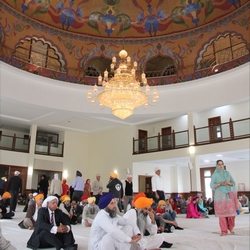 The Langar Hall at the Gurdwara has a large space. Close to the entrance on the left side, partitioned food plates were kept on a counter. Here, the devotees pick-up plates and keep on moving in an orderly manner towards the food counters. The volunteers serve the food, reciting “Wahe Guru”, the chant which is Punjabi for ‘God” and the recipients normally sit on the carpeted floor other than those who for health reasons are unable to squat on the floor; for them there are tables and chairs. The “langar” including Tea and Coffee is served from early morning till late in the evening.

Having partaken the “langar”, we came to the main hall studded with hand crafted marble, stone work, colorful tiling and stained glass, which give an awesome feeling. It would not be out of place to mention that while the services and skills of the local community were utilized during the construction of the Gurdwara, for the detailed stonework and woodcarving, specialist companies in India were identified to provide the requisite expertise.

The outer periphery has many surprises for the visitors, with some excellent stone carvings, which remind one of the similar style of work in some of the edifice in India. 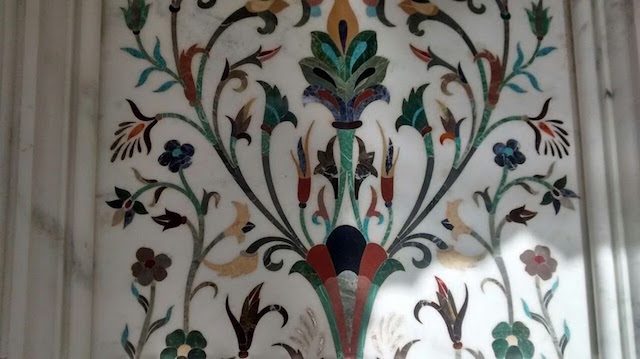 A visit to the Gravesend Gurdwara is not complete without a photo session outside The Nishan Sahib, a triangular flag made of cotton or silk, with a tassel at the end, which is hoisted on a tall flagpole, outside of all the gurdwaras.

The Khanda Sahib is the most recognizable emblem of the Sikh Faith symbolizing the four pillars of Sikh belief. The central double edged sword signifies truth, strength, freedom and justice. The circle or chakkar represents the Eternal and the two swords of Miri and Piri represent political and spiritual sovereignty.

We came out of the Gurdwara Sahib precincts, totally blessed, having a feeling of complete fulfillment and reached the car parking lot. The dawn was fast approaching, and in the fading light we headed for Barking. It was time for dinner, which the Bains very happily offered.

In the ensuing posts, we will visit the 4 gurdwaras at Southall and Gurdwara Sri Guru Granth Sahib at Glasgow.

Thank you for being with me on this blissful visit to Gravesend Gurdwara. Your continued support has always been very encouraging.

The Best of Gurdwaras from Gravesend to Glasgow – Guru Nanak Darbar, Gravesend was last modified: May 31st, 2022 by Ram Dhall

(vo) Puchhte Hain Kii Ghalib Kaun Hai, Koi Batalaye, Ke Hum Batalaayen Kya. An avid book lover, a passionate traveller (always looking for the next destination) and a lover of Indian and Western classical music - that's what Ram Dhall is all about.