On 24th September a group of 40 people was flag-offed by Honourable Principal Mam, Dr. Vijaya Laxmi Pandit. This group of amateur and professional trekkers filled with the spirit of youth were all set to conquer the Dhauladhar mountain ranges of Himachal and show the mighty Himalayas the might of their spirit. Under supervision of Dr. Lumb, Rachna Sethi, Savita Nigam and Divya Singh from the faculty and other experienced trekkers we started our journey at dusk, travelling the entire stretch of the pleasant October night making the most of every minute of this four day-trip, taking photos, singing songs and making new friends. We made a halt at a Dhaba in Karnal for a finger-licking-good dinner and stretching our body before we continued on the next (longer) part of our journey.

Amidst fun and frolic and sleeping in shifts, the night passed and early morning we woke up at our second halt, a temple on the way. This is where the adventure began. One might laugh at it but here many of us missed the luxury of our home (especially bathrooms). We moved on with the last and shortest part of our journey to Mcleodganj finally entering the Himalayan foothills and later that day we reached our destination. We were allotted our rooms and were told to assemble within half an hour. Tired of the journey many of us were least interested in anything but sleeping. However, all of us would be glad we didn’t sleep for we were heading to one of the most beautiful spectacles of nature. We were headed towards the Bhagsu Nag waterfalls. 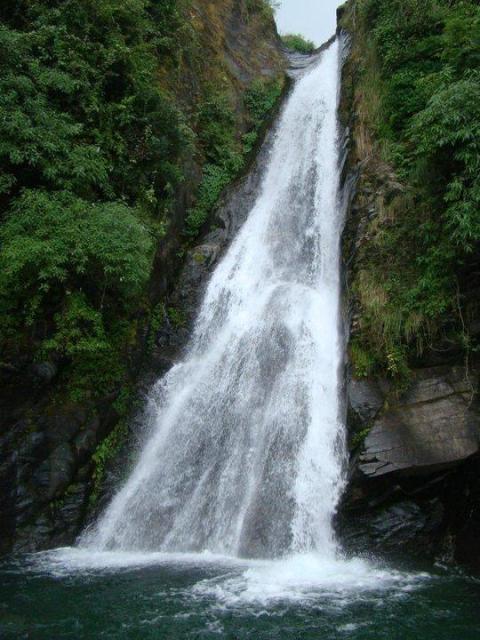 The very sight of this serene scenery rejuvenated all of us and we walked with enthusiastic steps. A shiver ran down our spine as the chilled water touched our feet but that was not enough to stop us from entering it. People even took full dips in that super cooled water. 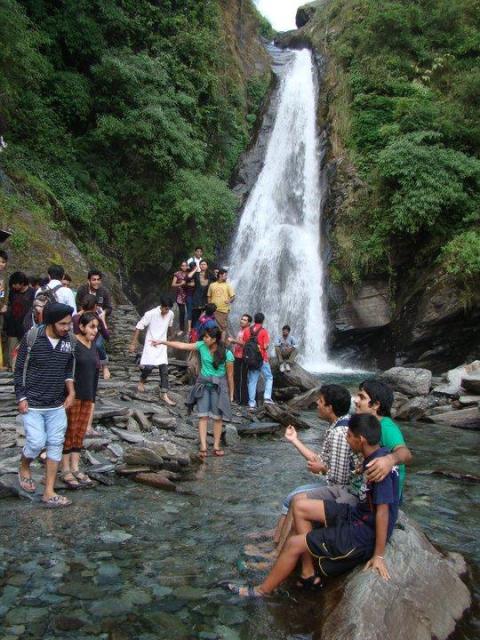 The water as I mentioned earlier was chilling the beauty mesmerising and the fun priceless. Those who had come halfheartedly and heavy steps to the Bhagsu Nag falls were now equally unwilling to return back to the comforts of their Hotel beds. That was the charm it had on us.
However, we had to return, rest and get set for the next day’s task: The first day 7 km forest trek. 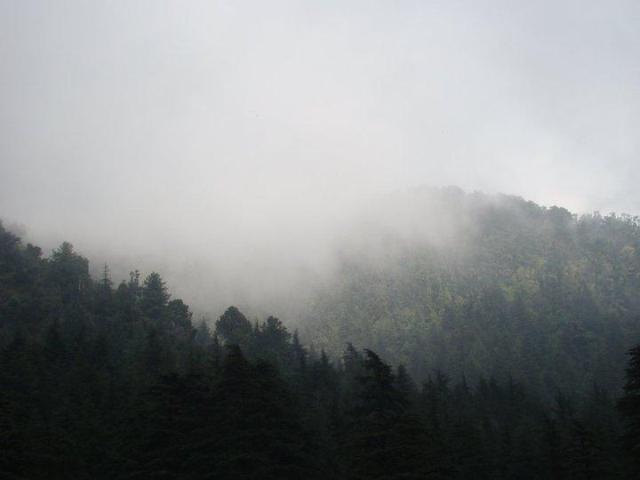 For those who hardly walk in Delhi and hop-in rickshaws for the smallest distance, seven kilometres was an accomplishment. Though we finished the trek with a lot of huffs and puffs the trek was worth it. This was the first time most of us were trekking among woods and for that matter even trekking and among all the sweat and sighs this trek ended on a good note. Though all of us were tired we were happy for our ‘achievement’, we enjoyed the beauty of the woods, taking shortcuts, minor bruises, bishshoo kuti and every part of the trek.

And then we were told this was just a warm up, the ‘real trek’ was the next day. That night was the party night when everyone danced to the best dance tracks. After all the dance and fun it doomed on us we should rest and prepare for the next day’s ‘ordeal’ a 14 km trek to Triund, which is at the height of 2975 metres above sea level.

This might sound hilarious but when we woke up the next day we were already tired, there was hardly anyone (exceptions are always there) who voluntarily got out of bed to get ready for the trek. However those who were ready and fit enough for the trek started on the trek under supervision of Dr Lumb. This trek was steeper than the last days trek and hence was much more tiring. We had to stop to catch our breathes every after walking every few steps, the track was not as uniform as the day before, the forest was dense, it was more eroded, jagged and rocky, there were small streams of water very often the track narrowed but Dr. Lumb kept on motivating and inspiring all of us. Everyone had the discretion to return from the point they feel they cannot hike any more. All of us trekked to Triund base camp. 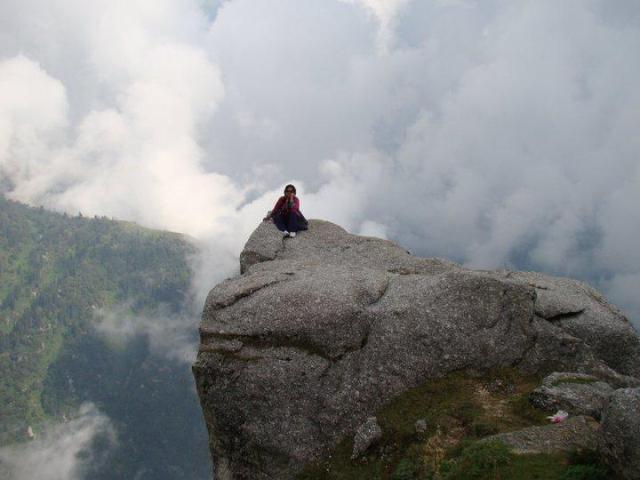 The group was split in two: the more experienced and efficient continued their hike to Laka Glacier and the rest decided to stay at the base camp, Triund and enjoy the view of the imposing and majestic peaks of Dhauladhar ranges. I was one of the rest who stayed. As we stood on this grassland in the mountains beautiful we witnessed beautiful clouds rushing in from all sides and crashing in each other. This was happening right where we stood. Quite often we were engulfed in the embracing clouds. The weather was changing. The sunny day was gradually changing to foggy, it could have rained anytime. 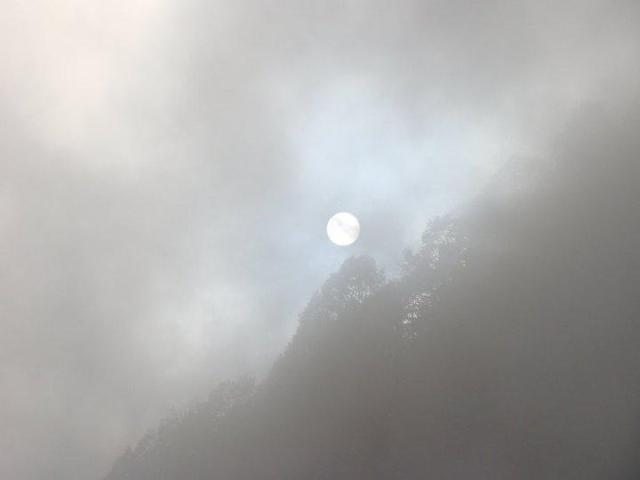 We decided to return. By the time we were ready to return the second group was back. Those who wanted to descend had started to descend leaving the rest to rest. By the time we were halfway down the sun had already set, it was getting darker and it had started to drizzle. Many of us came back on time but those who started to descend late had their own adventure in rain and darkness. This was the most tiring hike, everyone was tired some were too exhausted to do anything some were busy wrapping crepe bandages on their thighs and ankle but every bit of it was enjoyable and worth every pain we took and every bead of sweat. We were in the lap of nature, the purest environment the most serene sights. Though our bodies were tired our spirits were high.
The Fourth day everyone woke up late had their breakfast and painfully started packing. The time had come to return from the bliss of mountains to the misery of cities. We took a stroll around Mcleodganj, visited the monastery and shopped before boarding the bus and bidding farewell to the beautiful mountains. We were leaving the mountains but we didn’t leave empty-handed. We were returning with new found friends, strengthened bonds and their memories that we will cherish to the rest of our life.
All thanks to Dr. Lumb, Rachna Mam and The Trekking, Mountaineering and Environmental Protection Club, Rajdhani College.

A Trek to Triund (Dhauladhar ranges), McLeodganj was last modified: May 26th, 2020 by Sushantkshr

Hi everyone!!! I am a literature student and an avid reader and a traveller(I travel as much as a 'Student's pocket' would allow;)).......n i love travelling. I was planning a trip to Kedarnath and Yamnotri when I stumbled over this website. I loved the concept. I already publish content on article directories such as Ezine and Associatedcontent, etc.. The name and the people who contribute content on this site gave a more homely feeling a feeling of acquaintance.... That is why I decided to join ghumakkar.com as a contributor. I have adopted a new hobby of photography(with my all new Nikon 14 MP cam) and you will see more of it very soon. Thank you.

We also visited the Perambanan temple, built by the Hindu Kings when they ruled Java during the 8th century. The temple complex has three separate temples with South Indian Architecture for Brahma, Vishnu and Shiva and one each for their vahanas, Hans, Garuda, and Nandi.