Going Around Chennai
We hired two 9 seaters and first went to the Kapaleeshwara temple, which is at the centre of the culture in Mylapore. Go through Karthik’s another brilliant post about Mylapore. Had the darshan of Shiva and Uma and the rest of the family, without any hassles, came out and fed those cave-mouthed fish in the gigantic Mylapore pond. It was some sight as a large number of fish gravitated towards that hand that fed them, with their mouth open wide as a bag. 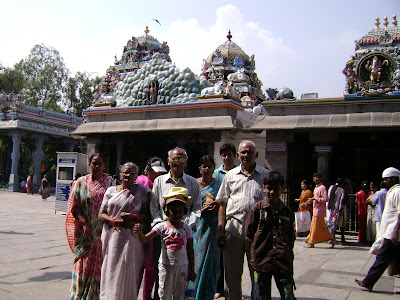 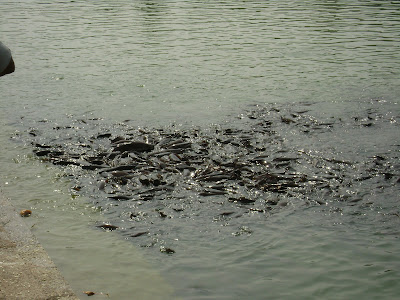 After this it was the turn of Gandhi Mandapam and the Snake park. Gandhi Mandapam is located next to the Guindy National Park an opposite the famed Anna University. It was a meeting point of valentines and still seemed that. 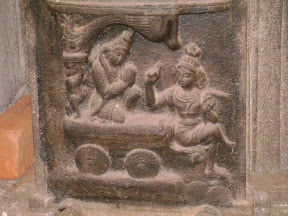 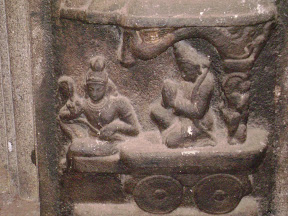 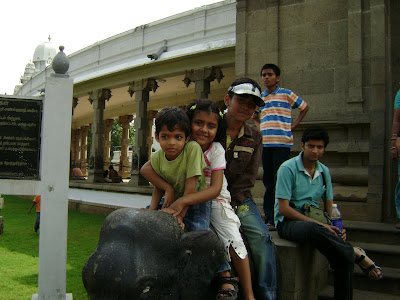 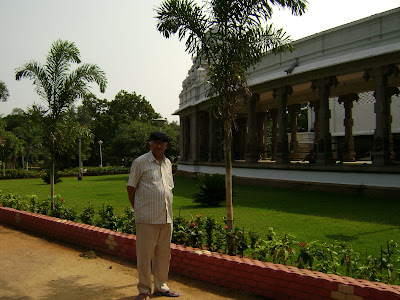 In the snake park, what fascinated more than the snakes were the exotic herbs with their medical effects displayed. We came out of the snake park by about 2:30pm. I have been a local to Chennai and I decided to take the party to the real beach of Chennai, i.e. Besant Nagar Beach. It was already four and our lunch time. The Restaurant corner was not as bubbling with activity as it would be during peak hours, but all of the restaurants were open and there were so many of them now, where there used to be a or two back in 1996. We spotted a Chaat shop and made their afternoon. We came to know later that it was a Bikanerwala enterprise (How else could the Raj Kachori have tasted so good!) and had opened a few weeks back. After our fill of Pao Bhajis, Raj Kachoris, Pani pooris, Pizzas, Burgers etc, we hit the beach. 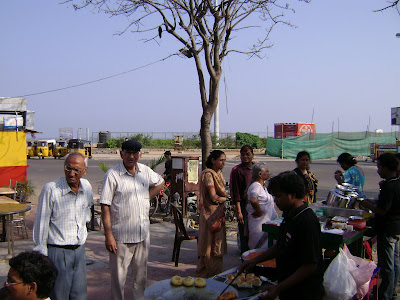 At the Elliot’s beach
There were a few in the party who were on a beach for the first time. The party frolicked and hit the road after a while for the Touristy beach of Anna/MGR Memorial. It was 26th December, a Friday and the whole of Chennai was at the Marina. We gave up the idea of going to the beach browsing the beach flee market after wading through the crowd for a little far. We walked/rode back to our hotel in time to have dinner, check out and reach the spic and span station of Egmore to catch our Rockfort express to the land of Rockfort-Trichy. 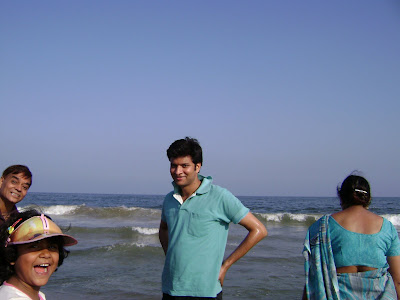 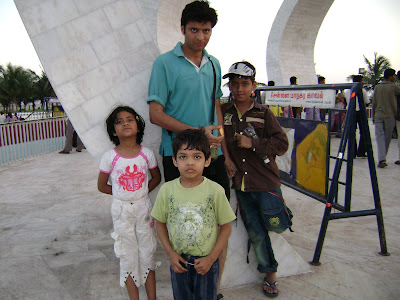 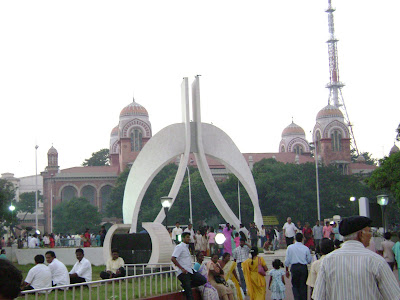 The station and the amenities there were really impressive and clearly in stark contrast with the filthy stations of Northern railway. It was a 24 coach train and as already mentioned a few times we were a large group, so what mattered most was the precise advance location of our coach on the platform, before the train was berthed. We got that readily.

In Trichy
The train reached Trichy in the morning at about 6:00am . Our check-in time at the hotel Tamilnadu, located nearby was 10:00am.Thiough we had sent advance information about our early arrival, there was no confirmation of room availability on our arrival. We rang up the hotel and told them about our arrival. The staff understood our situation gave us rooms within half an hour. We had six double rooms here. The rooms were good, much better, in stark contrast to our fist stay and to the relief of the party.

We spoke at the desk and through them hired a mini bus (Mahindra Tourister-14 seater) to cover the local Rockfort temple, Srirangam temple and Vrahadeeshwara temple in Tanjore. The driver was very cooperative and good at his job. We first headed to the Srirangam Temple after having our South Indian Breakfast at Vasantha Bhavan, near our Hotel. We reached Srirangam inner square while marveling at the grandeur of the temple. It is made of 7 concentric compounds with different sizes of Gopurams at every level. The sixth from out side Gopuram is one of the grandest whose fascinating area shot gives goose bumps when watched on Discovery. “Srirangam(http://www.srirangam.org/history.html) is the foremost of the eight self-manifested shrines (Swayam Vyakta Kshetras) of Lord Vishnu . It is also considered the first, foremost and the most important of the 108 main Vishnu temples (Divyadesams). This temple is also known as Thiruvaranga Tirupati, Periyakoil, Bhoologa Vaikundam, Bhogamandabam. In the Vaishnava parlance the term “KOIL” signifies this temple only. The temple is enormous in size. The temple complex is 156 acres in extent.” 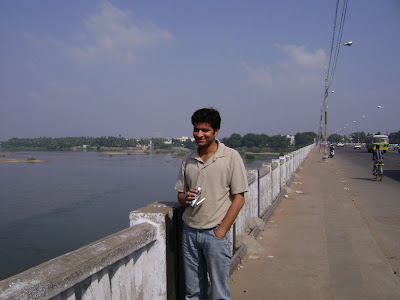 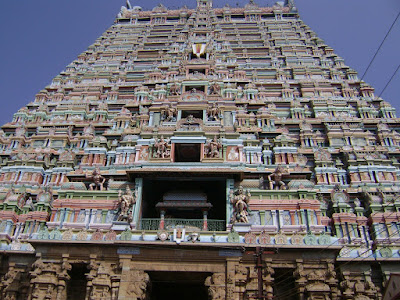 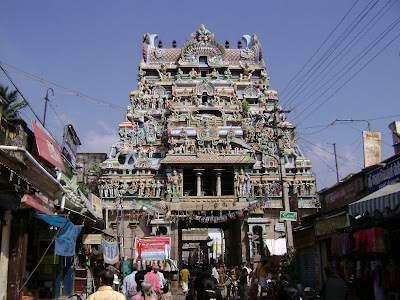 The queues were quite long and as we had decided to see Tanjore also before leaving for Rameshwaram in the night, we went for a special darshan which had its own cost. We could have relaxed darshan of the relaxing reclining Vishnu.

After this temple we went to another ancient temple, of Shiva, located nearby -the Thhrivanaikkaval temple mentioned earlier as devoted to the water form of lord Shiva. But it was closed due to delay at Srirangam. So we did a drive by parikrama around the complex and drove to Tanjore. The condition of the Trichy Tanjore road was very bad, only saving grace being the newly built stretches of four-laned portions. We reached Tanjore (56Km from Trichy) at about 4.00pm, while the sun still shone bright on the golden hued temple under a brightly blue sky, thanks to our adroit driver. Any trip to south would stand incomplete without covering this temple. 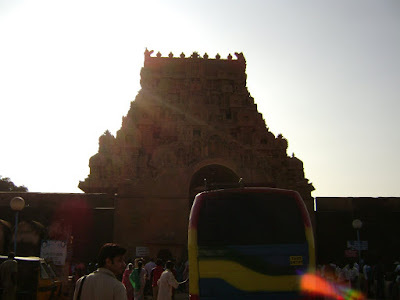 In Tanjore
The Brihadeeshwarar temple of Tanjore (Thanjavur) also known as the Big temple is under the care of the Archaeological Survey of India and is on of the UNESCO world heritage sites. It is arguably the most magnificent temple of south. The temple, constructed about a thousand year ago by the Chola king Rajrajan-who successors still exist- is an architectural marvel. 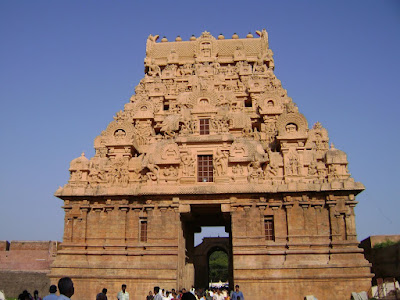 The top dome rests on a single block of granite 25½ feet square, estimated to weigh about 80 tons and tradition says that an inclined plane was built from Sarapallam (scaffold hollow) four miles north-east of the City and this huge stone was rolled up to the top of the tower by forced labour. The Sikhara and the stupi, it is said, throw no shadow on the ground, the base being so broad. The deity -Sivalinga is probably the largest in south India. The famous bull (Nandi) of black granite in front of the main tower is a monolith, measuring 19½ feet in length, 8¼ feet in breadth and over 12 feet in height. This monolithic bull is stated to be the second largest, the first being the one at Lepakshi in Anantapur District. It was believed that this bull was growing in size and as it was feared that it might become too large for the mantapam erected over it, a nail was driven into the back of it and its size has since remained stationary.

A peculiarity of the temple is that the sculptures relating to many of the Motifs on the Gopuras are dedicated to Vishnu, while a large number in the courtyard belong to Siva (Saivite legends). 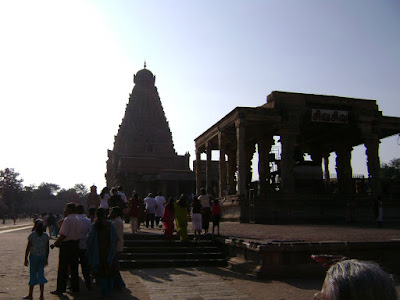 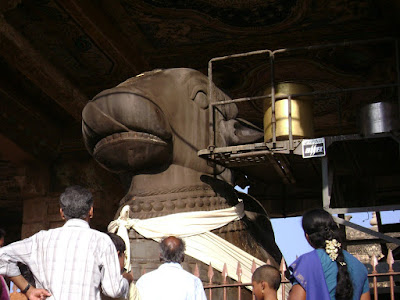 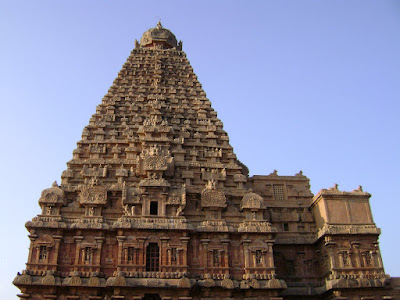 Tanjore is also famous for its world renowned eponymous style and technique of painting. The tnjore paintings are made on canvas by using glass and metal to depict scenes from mythology.

After finishing our Darshan and visit around the temple we drove back to Trichy and headed straight to the Rockfort temple dedicated to Ganesh and Shiva, located on the top of a rock at a height of 83m.The rock is one of the oldest in the world-approximately 3.800 million years, which makes it as old as the rocks of Greenland and older than the Himalayas. 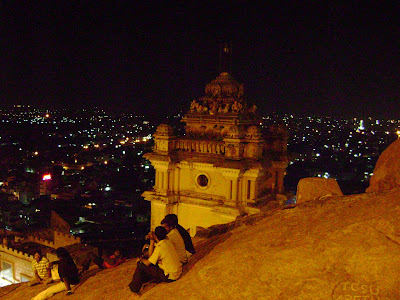 At Rockfort
After climbing the flights of stairs cut in the rock, when one reaches the top, the view of the city below on one side and the Cauvery in its pristine spread with the Gopuram of Srirangam in the background on the other is simply breathtaking. The temple is known as the Uchchipilliyar temple. There is another temple of Shiva known as Mathrubutheswarar of Thayumanaswami temple in which the deity is carved out from the base rock.

This was all we could see in Trichy, which has a few other places of interest as well. We left for Rameshwaram in the night at 10:30 by Chennai-Rameshwaram express. Yes, I wanted to add that the Mini bus (MAhindra Tourister/Tempo Traveller/Mini Bus) option is very convenient for a group of our size, and we would be using this option more in the coming days.