It was in the middle of summer, and neither me nor the spouse had the luxury of being able to take a holiday on the same day. So, combining Friday with a Saturday and Sunday was out, and as it turned out, it was not much of a long holiday since we only left Saturday evening (work intruded and we decided to go rather than cancel).
As a prequel to this decision, we spent a fair amount of time trying to figure out where to go. But given the luxury of 2 days that we had, it was very difficult to think of going to hill stations other than Mussoorie, and going to Mussoorie in the middle of the summer with the jam-packed tourist season was not exactly very pleasurable, and more important, Mussoorie was where we had gone last. So I opened some books like the Outlook Guide to nearby places and also a website called AroundDelhi.com. In the meantime the spouse was getting a trifle impatient at my indecision in recommending places.
I first thought of Neemrana, but no rooms available. After a bit more perusing, I finally settled on a place called Shiva Oasis in Behror. Made a booking for Saturday night, so cost me around Rs. 4000, a trifle expensive I thought.
It was around 120 km away when looking from Gurgaon, and in the evening when I set out, was hoping that Gurgaon traffic would not torture me. I took the new eight-lane highway, and it was fun most of the way except for a 20 min stop in a mini-jam. But after that, it was all nice and fast, even though it was dark. I did not take more than a hour and a half to reach the place, and this was after taking a pit stop along the way (nature sometimes reminds you that you need to take a break). 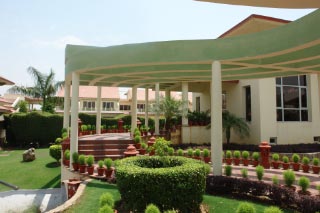 Finally I reached when it was getting dark. The place looked nice and clean, and the room was pretty decent, and the AC worked. I would have had a heart attack and probably murdered the manager if the AC did not work. So relaxed for some time in the room, took off shoes and socks, and then wanted to wander around a bit. The first thing I saw was the pool, and boy did it look clean. 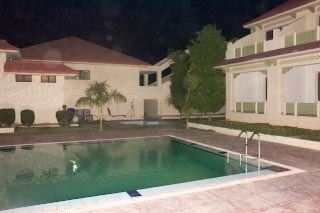 Since our cost included dinner and breakfast, we settled down to some dinner. Maybe because it was so hot, there were not many people there and dinner was okay, not great. But service was okay. Anyhow, pool not a good option at night given that there was nobody else there, so the morning it was.

In the morning, we spent more time looking around the resort. It is essentially a very well maintained place with a central pool surrounded by rooms; the perfect place if you go with friends in a group for the weekend and when it is slightly less hotter. Relax with plenty of drink and booze, and once you have unwound enough, you can go back home. And that is precisely what we did come afternoon. Even though we did not spend too much time, it was still a relaxation and I felt better heading back home.

A resort called Shiva Oasis in Behror, midway to Jaipur was last modified: May 18th, 2019 by Ashish

Whenever we visit a Museum, we always wonder what compels us to visit such places. What do we hope to see? A visit to this museum would have a great impact in a child’s mind. There is a great educational value as well. Almost every country is inhabited by a people differing in manners and habits, language, religion, dress. Such visits will help them to know about different countries, to distinguish between individuals from other races, how very different they all look, to learn how people in different countries dress up during their festivals, their way of living.