Allahabad was our first night-stop on that great drive to orient which I wrote some time back. For a better period of our planing, we were finding ways on how to reach Gorakhpur by first night, we would flip over the maps one more time, calculate the distances again, try to get updates on East-West Corridor by NHAI (National Highway Authority of India) but it still was as far as 750 KMs and hence not a place where we could reach when we call quits on Day1. The constraints were same viz. assume that we are not clocking more then 60 KM an hour, no driving when it gets dark, plan for unplanned stoppages, remember we have a 3 year old baby, also remember that we are just 3 people, and do not forget to remind yourself that we are not driving towards Canada (read Delhi-Mumbai) and rather going towards Mexico (Delhi-Patna) and so on. So even though nothing changed in the realm of geography while we were amidst planning, our appetite for accepting a distance of 650 odd KM as a day-drivable thing grew gradually. Its a very peculiar thing where a next-big number, somehow, doesn’t appear as big. So when one fine day, we thought that why not go via Allahabad – Banaras towards Patna, our plan passed the test. Suddenly we had decided that we would be staying at Prayag on Night 1. I believe Prayag (aka Allahabad) had to happen so it happened.

We reached our hotel only by evening, even though we must have entered the city by 4.30 PM or so. It gets dark a little earlier as you go towards east. We were booked at ‘Kanha Shyam’, a hotel which has lived its glory years but is still considered as one of the better hotels around. It was a long drive and the joy of reaching in time was getting difficult to hide. After all it was 650 KM in about 11 hours but I saved the bragging for sometime else. We checked-in and ordered for some mutton biryani and decided to stretch our legs and give some necessary rest to our spines.

‘Kanha Shyam’ is in ‘Civil Lines’ area and we were told by polite staff at the reception that we can utilize the evening to do some shopping as we were very close to the popular shopping area, so thats what we did.

Let me give you some information on this city before we venture into shops and do some buying.

Allahabad city is placed on the confluence of Ganga and Yamuna and happens to be one of the cleanest and the fastest developing cities of UP. It is located on NH-2 between Delhi and Calcutta and is well connected by road and rail. Its a rich city in terms of history (the ancient city of Prayag), culture, education and political & religious importance (home to many leaders and the site of the Mahakumbh). Being a literacy and cultural hub, it also boosts of 75% literacy levels and the spoken languages are Hindi, Urdu and English. The various popular dialects of Hindi within the city are Illahabadi, Khari Boli, Awadhi and Bagheli. The city is a hub of education, with the Allahabad University, NIT and IIIT-A, along with many, many prep-schools and coaching institutes for the whole district and surrounding cities

It also has the high-court for UP, the headquarters of the North Central Railways and many government administrative offices. The biggest event in the city is the Magh Mela (mini-Kumbh) every year in January (starts every year from Makar Sankranti in January and ends at Maha Shivratri in February); and the Kumbh Mela every 12 years at the Sangam that claims more than 1 Mn visitors each day.

It was dark, 7.30 PM or so and Allahabad looked busy. It seems that the whole city is out on the street, munching. There were food stalls – chaat, chowmein, momos, juice, ice-cream, shakes, and what not, then there were vendors selling balloons, road side shops selling wares ranging from combs to vessels. Shops didn’t look too crowded but they definitely looked well lit and very active, there was this bouncing mickey-mouse outside that big Mall where kids were having a great time. I also noticed a wine shop which was so much different then the pigeon-cages which I see in Noida. This shop was about 12 feet wide and 4 feet deep, it was open from the bigger side of the rectangle and you could actually smell the bottles before buying them. It made me feel more safe. We did couple of rounds of the market, had our dinner at McD in the mall and decided to head back hotel in a cycle rickshaw. My 3 year old commented that this rick would turn into a cycle if it breaks. Somehow these long distance drives also affect the young ones. Surviving the ride in that high rick, almost 25 % higher then the ones we find in Delhi and probably 50 % then the ones which are in Hyderabad (the one in which Naagesh is seen in the iconic ‘Hyderabad Blues’), we reached back to Hotel. I arranged for some chapatis from a near-by dhaba for my little one and crashed. It was about 16 hours when we had started from our home near Delhi and it was hard to believe that we were now at Allahabad. So far so good .

After getting up at our usual time of 7.30ish, we had our breakfast and checked-out of the hotel by 10. The breakfast buffet was pretty nice. Cordial and effective staff, hot and delicious food, comfortable chairs and not too many people around. I did look around, there was a small group of 4-6 people with file-folders in hand, my best guess was they were from some IT company, camping there fo finding some bright engineers who could work on banking software and what not. We left after having full, thanking the stewards and front office ladies.

Our first stop was to be at ‘Anand Bhawan’, an old house which witnessed and hosted numerous sessions around the freedom movement. It was a palatial bunglow of Moti Lal Nehru, the acclaimed lawyer whose son later became the first Prime Minister of India. The duo was often called ‘The worthy son of a worthy father’ and while I do not really agree with some of the things Pandit Jee did, I definitely look up to him as a learned and intelligent man. 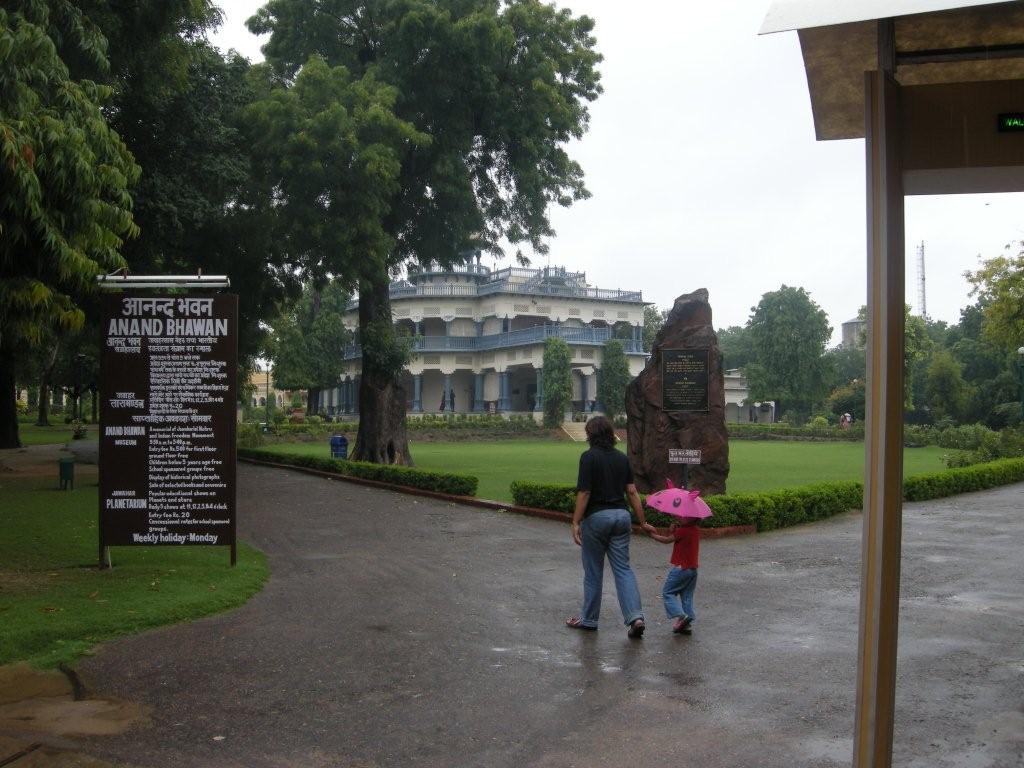 Anand Bhawan – As you enter

Anand Bhawan is a big housing complex now with large lush lawns. As we parked our car outside, we noticed that there aren’t too many visitors, probably because of the drizzle. The lone sentry at the gate didn’t look intimidating and the ticket counter was vacant. We waited for him to buy our entry tickets while my 3 year old did few rounds of running on the lawns. The place looks old, more so when you look at the trees, but very well kept. The main structure has two floors. The outer walls of the rooms at ground floor, which open at varandah have been taken away and in place of that a glass wall has been put. Its a very novel way of restoring an old structure, so while you can look at most of the things inside the rooms, you really can not go inside. There is nothing much to look at but as you focus your gaze at the white bed spreads over floor-mattresses, and start to visualize the meetings which probably the Indian political think-tank had, about 70-80 years ago, it suddenly starts to appear much more lively. So we looked around, went to the first floor. There are more rooms here. You can look at JN marked wallets, cig cases, expensive cutleries, old coins, letters from Priyadarshini to Jawahar and get carried away. Apart from this main structure, there are other buildings as well in the campus. We had more things on our agenda so we pushed out.

Time to go to Sangam and to a place which hosts one of the largest mela on earth, the Kumbh Mela. Allahabad is not a very big city so it didn’t take us long to reach there. It was raining. As we reached the ‘Kumbh Mela’ area, we could see that there are large rectangular lawns/fields with roads on all sides. If you look it from top, it would resemble a chess board with thick borders between cells. I guess these are done to manage the large no of visitors who throng this place during Mela. May be they put temporary accos in these lawns. We asked for direction and went all the way till Ganga. We could not spot a point as such which could be called ‘Sangam’. I was told that its fairly difficult to see two different rivers on a rainy day. On the front, we could see the mammoth face of Ganga, on the left, we could see the bridge which goes over it and on our back, the large open area. It was still raining and getting a little depressing. Even though our drive to Banaras was not a long one, we still wanted to reach while its sun-lit. So we looked hard one last time and I took a U turn and steered towards right to catch the bridge. I made a note, that I need to come here again.

At Sangam in Prayag

As I drove over the bridge, I could sense the Ganga underneath, the cosy rooms of Anand Bhawan were still fresh in my mind and I was wondering that what would Banaras have in store for me.