Knowing the fact that there will be too much rush during one of the long common holiday vacations of the country, mentally prepared for that and decided to go. We decided to drive our car as Udaipur is not far and can be a good experience of long drive for a beginner like me. Yes it was first time that I was about to drive car for more than 200 km.

I was prepared to put it as a simplest of effort without too much fuss. I decided to ask my parents to join as they visited the place approximately 35 years back. So I thought to take them with us so they can witness the place again to recall their memories. However my father was keen to join, my mother gave up the idea saying it would be tough for her to sit in  car for such a longer period of time. Now again we started thinking and a thought of cancellation was on cards. Sad isn’t it?

No, no, nothing sad, as I had decided to ask one of our friend Jalpa, who is always a keen and curious traveler and will keeps on asking for trip plans. She willingly decided to join subject to permission and inclusion of her better half Tapan. Finalized..!!, without any further delay both of them agreed to accompany us on our trip to Udaipur popularly known as “City of Lakes”.

began with “Dhanteras Pooja”, followed by some last minute preparations and arranging our luggage in our car etc. For me starting of the day was curious, keen, with little tense thoughts that how will it be for me to drive through the patch of more than 350 k.m. We decided to gather at my place so that we can straight away catch roads to Udaipur. Just to mention that after lots of enquiries with  friends we decided to take route of NH-48 via GJ SH-5, which is slightly shorter and has less traffic and conditions of roads are also good.

Here I would also like to mention that our plan was bit odd-out as people going on longer drive prefer to start at night or early morning on the contrast we decided to start after 11.00 to avoid rush hours on highways. Let’s not forget to mention that this road up till Rajasthan border has no toll tax. 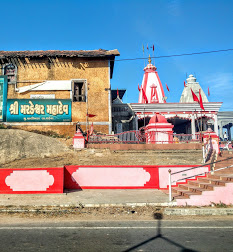 With blessing of Mahadev

We left our home at around 11.20 p.m. and our first stop was “Mardeshwar Temple”, Palikhanda, a place  located adjacent to high way itself. We decided to take blessings of “Lord Shiva” to start the journey. It was around 1.15 pm we left for our next planned stop “Shamlaji Temple”. We were at “Shamlaji” around 2.50 pm. After taking the darshan in the temple, we took a bit longer break here for some refreshment. I am avoiding writing historical details of this two temples as authentic information is easily available on web and there is no point writing it again. We left Shamlaji at around 3.30 curiously waiting to reach our final destination.

On route started discussing plans to explore Udaipur and places around. Few kilometers further and we crossed border check-post and entered in Rajasthan, on NH-48. At around 6.05 we were at gate of “Gujarati Samaj Bhawan, Udaipur” (Gujartisamajudaipur). A good place to stay with family, a clean, affordable and peacefully located just on approach of city.

After looking at 2-3 rooms we decided to book our stay here for 4 days,  which was initially denied by the reception guy, but eventually agreed. We got settled in our rooms deciding to leave for some nearby city roam at around 7.30 pm. We were at gate, in the meantime Tapan has already gathered information about 1-2 places around our stay where some “Mela” was happening. We briskly visited and headed back to our stay for Dinner. 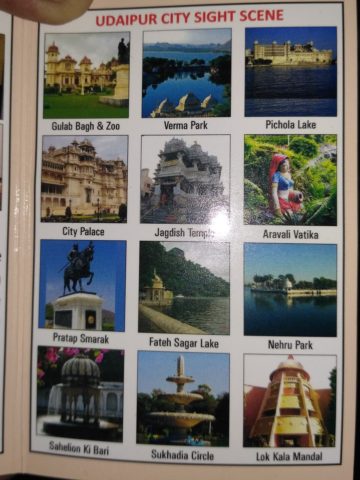 Our earlier plan was to explore Udaipur city as we thought we will be feeling tired after road journey, however plan got modified itself during the course of healthy discussion in Car while we were driving to Udaipur.

Modified plan is now to explore “Nathdwara” and “Kumbalgarh Fort” today. After having our breakfast we started early morning around 7.15 for place famously known as “Shrinathji”. Roads are too good here to enjoy smooth driving.

We reached there around 8.55 and immediately rushed for Darshan as one of the local vendor said that darshan will open at 9.15. Here to get blessings of “Shrinathji” you need to be well aware of darshan timings as temple closes frequently for various rituals. Temple complex is clean, the darshan scenarios are very similar to other Hindu temples. After darshan we explored local road side market to buy some local varieties. Although it took an hour or so to end the shopping act. 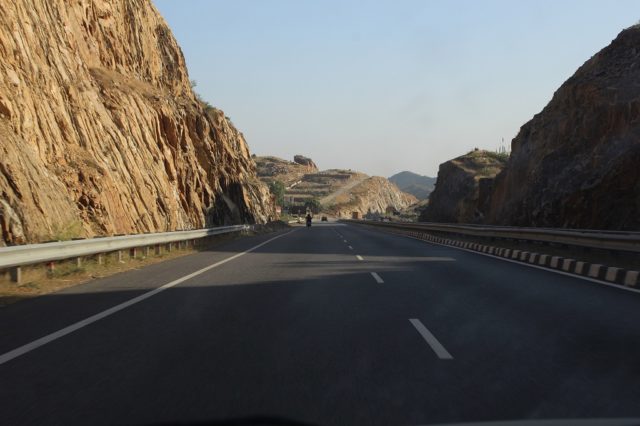 Left Shrinathji at 11.00, from here we were too much excited to head towards our next most awaited destination “Kumbalgarh”, for which we took roads via Haldi ghaati ( again I am avoiding writing history- please refer Wikipedia ). Roads here are small with lots of hurdles. As we were progressing further it was worsening, typical village roads.

Driving further we felt like we were all alone on the route and was thinking that if something goes wrong nobody will be there to help us. Driving ahead we found a beautiful lake (Joshiyon-ki Madri – courtesy google) besides road, we decided to stop. We enjoyed, clicked some memories and moved ahead. Yet there were no signs of “Kumbalgarh” although we kept on driving and after few kilometer we were on hills of “Aravalli Mountain Range”. 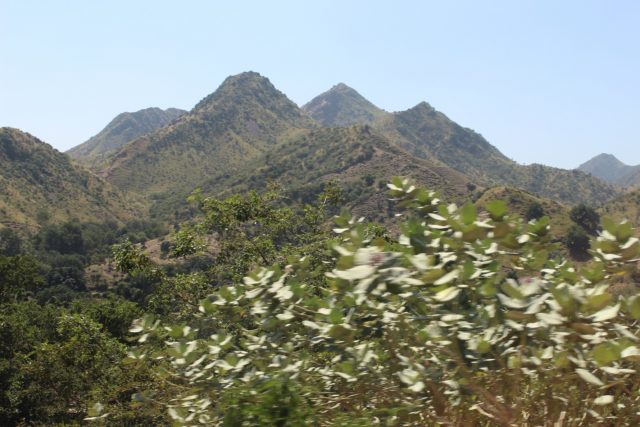 This was my first experience to drive in hilly area, but by god’s grace somehow I was not feeling scary and was driving with utmost care and confidence. On the way we crossed another nicely located lake (Lakhela Talao – Courtesy Google).

We wanted to stop here for few clicks but couldn’t as roads are narrow. Finally we could site “The Great Wall of Kumbalgarh Fort” (which is known to be the 2nd longest continuous wall). Parking fees for this place is collected well ahead of entry gate of the fort. Excited and drove through the entry gate, parked our car and took entry ticket for the Fort (entry fee for the fort is very nominal Rs.15/- for Indian resident). 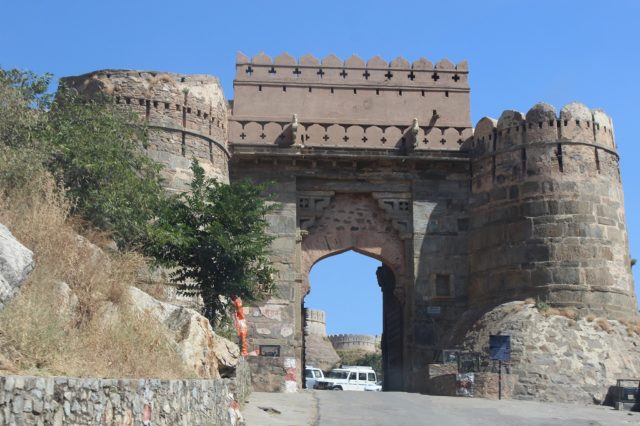 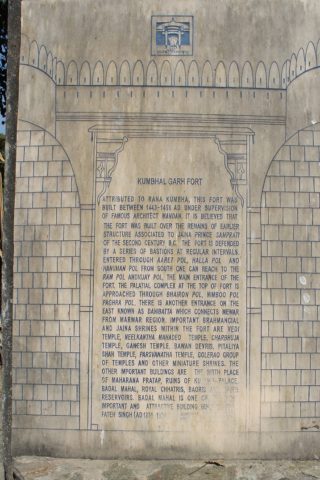 We were at “Kumbalgarh”, after having look at history board at entrance, we started climbing the fort and clicking memories. Fort is nicely maintained by tourism department. A must visit place around Udaipur. You can also opt to stay in many resorts located around.

It would surely be a great experience to stay here and also get chance to have “safari tour” next morning. Fort is located on top of the hill and covered by 2nd longest wall, it’s an Unesco World Heritage site. Don’t miss the top floor of the fort from where one can site the approach road and on back side of fort a mountain range spread across the fort. 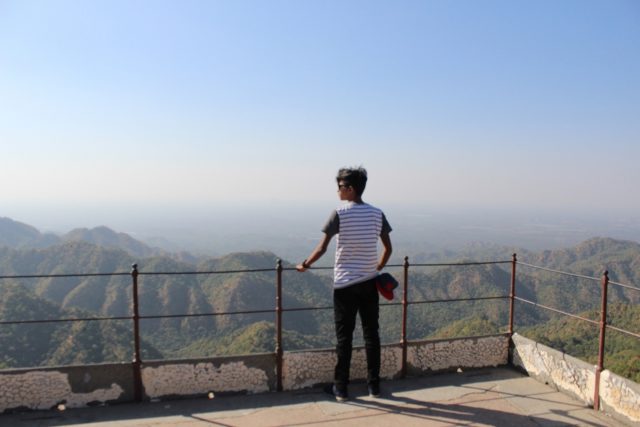 Stunning Views of Aravalli mountan Range from top of the Fort 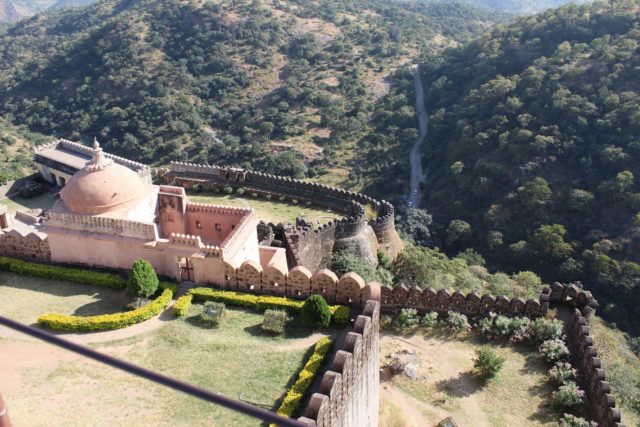 Surprisingly we all are of similar interest of nature and heritage so enjoyed a lot. Climbing down was relatively easy. We had a tea break and decided to head back to Udaipur. Our plan was also to explore Ranakpur, which was just 50 km from Kumbalgarh however we decided against as it was getting darker and we were not having any idea about route to Ranakpur.

Relying only on google maps was not advisable thus we skipped and returned back to our stay in Udaipur. Heading back to Udaipur we took the shortest interior road via kelwara RJ SH-32. We crossed and stopped on a bridge on a beautiful river( Berach River – not sure, courtesy google map). Stopping here was an absolute unplanned joy. 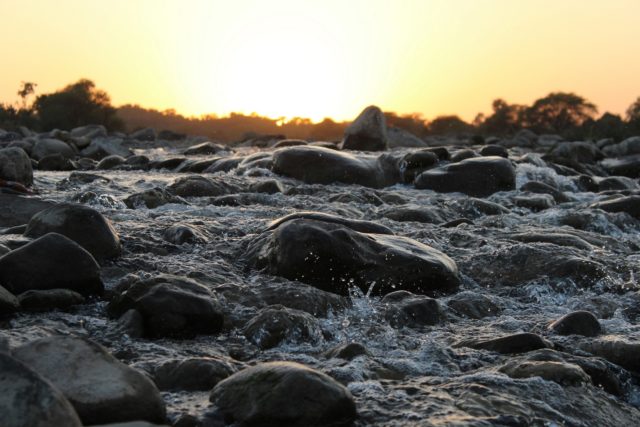 On returning at our stat we all were feeling damn tired and after finishing dinner in bhawan canteen were in beds (A nice homely cooked food served here). Next day was not going to be superb as we decided to explore the City of Lakes. In next part City of Lakes and an unplanned beautiful destinations around Udaipur.

I like to Travel different places different time, all though not a frequent traveler . Mainly Nature Lover, likes Heritage, Wildlife. Once arrived at destination I get curious to grab and share knowledge about the place. My main interest to write here is very similar. I believe that sharing knowledge and information is the best thing to be done by a traveler.

The festival of Holi is all about fun and happiness scattered through splendid colors. But in Braj Bhoomi, that includes Nand Gaon, Barsana, Govardhan,…