Day four was the day of bidding adieu to Pachmarhi and we started off for Bhopal at around 9.30 after packing off and a heavy dose of breakfast. Another rain washed cloudy day and we enjoyed our ride back to Bhopal with sad hearts but with fond memories. We reached Bhopal at around 4 p.m. and had our lunch at Palash Residency. Then, we eagerly moved on to the upper lake road and started off with Van Vihar. 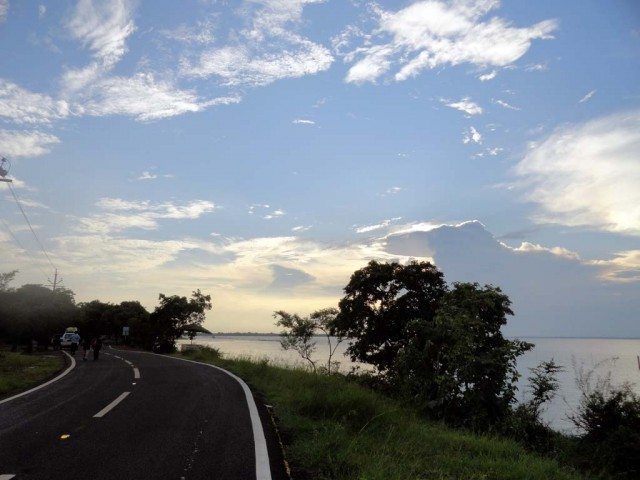 Road with Van Vihar and Upper Lake on either side 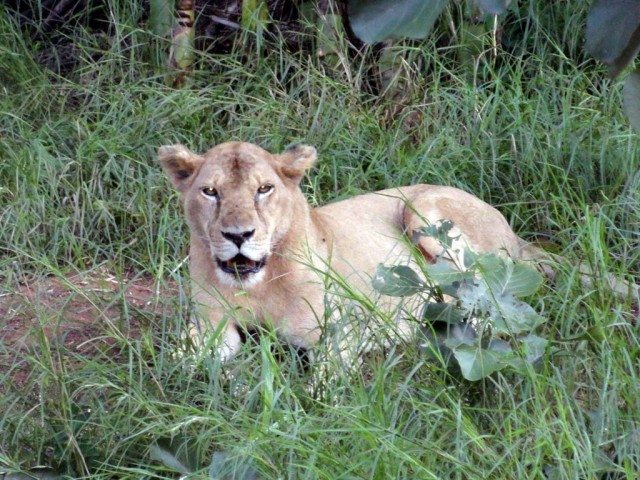 It was a zoo where animals were kept in their natural habitats. The area was fenced and the fencing stretched all along the lake side. We could spot lion and a proud lioness, coal black furry huge bears, elegant spotted deer, snouts of crocodiles stealthily lurking under placid lake surfaces, snakes of a huge variety, cute turtles, birds, and a bold leopard perched royally on a rock top. Thereafter, we stopped by the upper lake to have our boat ride. A speed boat ride of 5 minutes was absolutely mindboggling and was worth every penny of the 750 bucks for the group.

Swans gliding in the glimmering waters of Upper Lake, Bhopal

We decided to try our luck for the next destination, the aquariums or the machli ghar facing the lower lake. It remains open till 7 p.m. and it only 6.30. We, especially the children, enjoyed the wide variety of the colourful fishes of all possible sizes and shapes. From there we decided to dump our belongings and take shelter for the night and hotel Arch Manor was chosen since it was situated right at the heart of the city amidst malls and glittering shops; not many though given Bhopal is a quiet and small town with not a very large population. After a brief getting-fresh session, we were off to Wind and Waves for our dinner by the lake side. Food was not outstanding but then the sights and sounds with the strangely coloured distant lights getting reflected in the shimmering lake waters created a mesmerizing magic moment. Tired eyes, tired legs and tired children decided to call the day off.

Day five was the last and final day with the hurry of catching the 2 p.m. Bhopal Satabdi back to New Delhi. We decided to make the most of the few hours. We first hit the Indira Gandhi Rashtriya Manav Sangrahalaya (a post colonial museum). But then as soon as we reached we could sense that it does not have much to offer.  The museum is spread over 200 acres of rocky surface of the Shamla Hills and represents the folk ways of life with the displayed objects being fashioned by the tribal and folk communities, camping at the site to carve the specimens creating a miniature presentation of the tribal/folk life. From there we reached the Regional Science Centre, also located on the Shamla Hills.

This science museum had a lot to offer with about 300 participatory exhibits demonstrating fun and tricks of science. This interested the children and adults alike. After the visit there was barely time left to grab a quick lunch from MacD and then rush on to the station. There was no tension as the periphery of Bhopal is not very expansive and you could reach the station in about half an hour from whichever part of the city you are. Some of us also grabbed some books from the CrossWords in the mall while on lunch so that we could wile away the time during the eight-hour journey back to Delhi. This Pachmarhi-Bhopal vacation of ours was a living example of absolutely breath-taking beauty combined with enough of relaxation and peace, all necessary ingredients of cherishing vacation – as one of us surmised though the vacation lasted only five days yet left indelible memories for us to cherish for lifetime.

Being the nature lover’s that we are, we first went for a walk on Camel’s Back road. Camel’s Back road is a long winding road frequented by nature lovers who visit this place for their morning and evening walks. Unlike the Mall road, this was a much better place. It was calm and the views of the Himalayas were breathtaking. As the skies were clear, the snow-capped peaks could be seen clearly. Kedarnath, Badrinath, Gangotri and Yamunotri are some of the peaks that are visible from Camel’s Back road.