The “call” was typical. Less than 500 yards inside the Dhanagari Gate, in the dense forest, everything seemed  to stand still on this warm morning. For once, even the wind seemed to have stopped. Tearing through this deafening silence were the repeated shrieks of the monkey warning the miles of dark jungles. It is on the prowl, Akram whispered. Engine of the Gypsy shut, we waited in nervous anticipation… nothing was moving, the trees, leaves, as if in fear… Our chase for the Tiger had begun!

We left home (Noida) at 4.30 am for Ramnagar in our hardworking Maruti Swift. Our rooms at Camp Dhikala in Corbett were already booked. We had to meet up with Akram and his Gypsy at Ramnagar. We crossed Moradabad Bypass at 7.30 am but the  village traffic on Bazpur-Ramnagar road slowed us down – we finally reached Ramnagar some time after 9.30 am. It took us another 30 minutes to shift our bags to the Gypsy and park our Swift at ‘Jungle Lore,’ a picturesque camp on the banks of the Kosi river, for two days.

At the Dhanagari Gate, while my Dad went to make the necessary entries at the gate office, mom, dadi and I went to the gift shop alongside it. The shop is well-stocked and which sells Corbett Tiger Reserve souvenirs like caps, T-Shirts and coffee mugs. I was very hungry as we had started off without having breakfast, and had a pack of potato chips from the dhaba across the gate office.

All set, we started on what is like an annual pilgrimage for us now. The drive from Dhanagari Gate to Camp Dhikala is 32 kms into the jungles. This two-hour long safari is one of the most facinating and takes one through some of the densest forest patches of Corbett, dried-up monsoon rivers, some very steep climbs, and finally the Core Area, alongside the beautiful Ramganga River into the sprawling Dhikala Forest Rest Houses.

Most people with night stay permits, enter Corbett early in the morning by staying overnight at Ramnagar, or at the tent camps around the Reserve. At 11.30 am, we seemed to be the last to enter. Just 500 yards into the Reserve, we heard a monkey’s ‘call’ from the woods ahead of us. Moments later, we spotted a frightened Barking Deer among the trees little away from our Gypsy which by now Akram had parked. He had shut off the engine. Dad, mom, Akram and me, were all standing in the open Gypsy.

It seemed the world had come to a standstill. Nothing around us moved – the trees, the leaves… even the wind seemed to have stopped. Breaking this absolute silence at regular frequency was only the monkey’s shriek that 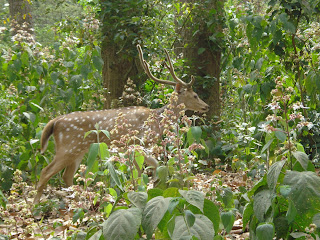 tore through the miles of dense jungle and hills, warning other animals that the King was on the move!

For half an hour we maintained sharp vigil from the point where we heard the monkey’s call. We watched the path ahead of us with bated breath, in case the Tiger came down the forested hillside to cross the road to descend into the valley, into the waters of the Ramganga. After a tense 30 minutes and no luck, we decided to move on. Akram’s guess was that it could also have been a Leopard which is even more discreet than a Tiger and most difficult to spot. If it was a Leopard, it could have been resting on a tree, Akram said.

We proceeded to Dhikala, the innermost camp in the CTR. On our way, we stopped at the Crocodile Point. It is the  edge of a hilltop from 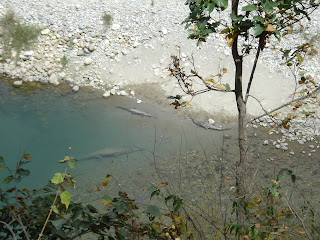 where you can look straight down into the crystal-clear blue waters of the Ramganga River. At this point the water, some 100 feet below, is collected into a pond-like corner and we could see four huge crocodiles taking an afternoon nap. On the way we also saw a variety of deer – cheetal, sambhar, numerous birds, termite hills upto 10 feet high and a group of grazing elephants.

We finally arrived at Dhikala at 2 pm. We were alloted Cabin 3 A and B in a duplex overlooking the green, pebbled valley and the river. Beyond the Ramganga, which was broader here, lay the even more mysterious, silent, innermost Core Area. Only forest officials visit that part of the Reserve for a Tiger count from time to time. We rushed for the buffet lunch at the Canteen – mom, dadi and I had Indian food, while dad had Chinese. The fare was all vegetarian and there were about 7 items on the menu. The food was delicious, to say the least. There is a dhaba across the parking area, where one can order eggs, apart from a variety of regular vegetarian food. Buffet meals at the Canteen cost Rs 200 per head, so my dad decided to try out the dhaba food for dinner, which was supposed to be cheaper. The claim turned out to be pretentious because dad paid Rs 180 for a fried rice and egg curry – he might as well have enjoyed the dinner buffet!

The lawns in Dhikala are sprawling and inhabited mostly by gangs of monkeys. While my dadi and mom went off to a post-lunch sleep, dad and I spent the afternoon sitting on the wall looking onto the Ramganga with our heavy-duty binoculars that we had hired before we entered Corbett. Both of us were booked for an elephant safari in the evening and all three female safari elephants were taking their afternoon bath in the river with their mahouts in attendance.

In the two-hour safari, our elephant took us to the Ramganga riverbed which, right now, at the peak of summer, is miles of grassland. The landscape changes as soon as the rains come in June. Torrential rushing rivulets appear then, as if from nowhere, all over the jungles, to help the Ramganga swell into a mighty, robust river. In March, grass at some places were as high as eight to ten feet, where a Tiger could quietly prowl up before an ambush, hunt and relax. At a distance on the other bank, we could see two Gypsys. There had been frequent reports of Tiger sighting in the past one week, and in Corbett, whenever one saw Gypsys lined up in dead silence, it meant the sighting of the Lord of the Jungle in that area. Our mahout gestured to us to be silent as the elephant soundlessly approached the area through dense grass. My nerves were racing and I felt my heart pounding. 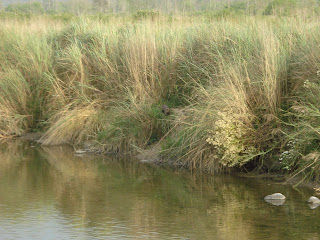 Will I be second time lucky? Will I get to see the most magnificent animal on Earth? Not just yet…

The highlight of the safari was, when we spotted several Tortoises in the shallow waters as our elephant moved around them. We also saw a family of Otters. There were two cubs and two adults. One of the adults stayed back to watch us incredulously, while the other three scurried into their tunnel in the river bank, the moment our elephant approached them. This particular adult posed for us bravely and enjoyed all the attention, as we took his pictures. Further ahead, we spotted a Hyena slaughtered, according to our mahout, for dinner by a Tiger.

Back in the camp by 6 pm, we were set for a very pleasant evening with cool breeze from the river. We downloaded all the pictures on to our laptop so that dadi and mom, who were up and about, enjoying their evening tea by now, could see all that we had done on the safari. Dhikala has no TV, no phone or net connection, which is such a welcome break! After some tea and snacks, I took a round of the lawns, and checked out the dinner menu at the canteen and dhaba with my dadi. While my dad headed for the dhaba , as I mentioned before, the three of us went for the wholesome dinner buffet.

It was past 10 pm and time for to put off the lights. With two close shaves and numerous other animal sightings, the day ended on a highly exciting note. The next morning beckoned, full of chances – as I went to bed with my spirits high, I knew that somewhere in the deep dark woods, the Tiger lurked and two bright eyes were watching us!

Trip to Corbett – My Annual Pilgrimage was last modified: January 4th, 2020 by AbhijitD

Disclaimer Again: The story in this post has nothing to with any real persons, places, procedures and events and any resemblance thereto is purely…